(some of) the Tarmachan Ridge, the hats & ghost stories!

(some of) the Tarmachan Ridge, the hats & ghost stories!


new day, new dawn, new walking crew.... it's been nearly 2 months since my last hill outing and this was a great one to get back into it

However, mental note walking with geographers and geologists has plus and minus points. Plus: you'd hope you'd be in good hands navigationally and be amazed by their knowledge of the surroundings. Minus: agreeing a route is challenging (too many cooks...) and inspecting the variety of rocks along the way (so really what kind of rock was it again??) LOL.

Anyway today's plan was for a very good group of old pals to get together for our 'hat day' reunion and tackle a hill before enjoying a few post walking beers. [Hat day was created many yrs ago after a drunken day in the sun on the royal mile and a selection of obscure hats purchased from the charity shop next to pub - including one big fur hat - great for the sweltering heat that day!]. so rules of day were: bring usual walking gear and some item of head wear to brighten up the pictures! This included an extravagant fur number, an England hat (we r all Scots!) and a tea cosy! 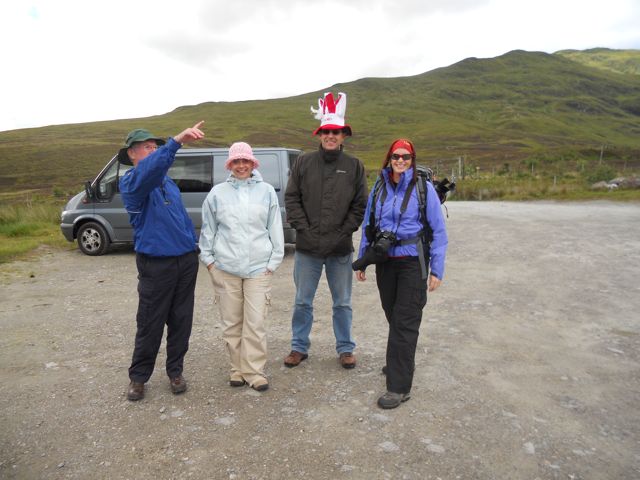 After a somewhat hair-raising drive from Killin to the car park - there is a reason why G is not allowed his granddaughter in the car!!!! We set off from the lower car park and headed off in one direction - then one geographer said to the other...
After much debate we changed direction and decide don a different route plan. we aimed to take in some of the ridge, prob not all of it, and G was intent on making sure we did some 'interesting' bits. All were raring to go, well nearly - Fi did keep enquiring about the need to go up a hill before going to pub! Was a very pleasant walk up the path and we all had a good blether - one of our group is just back from Malaysia for 2 wks so good catch-up time. The sun broke the clouds and the weather was fantastic - great views all around and saw Ben Vorlich & Stuc a'Chroin and Ben More & Stob Binnein in the distance just dipping into the clouds. G giving me a quick guide on what was where... We headed along the path and stopped for a spot of late lunch just at the quarry. The dino mix was produced and scoffed quite quickly! Much discussion about the rock being quarried and some plans made about pub and dinner later. then another minor change to planned route and it was agreed we'd cut out Beinn nan Eachan and just head off to Meall Garbh first. 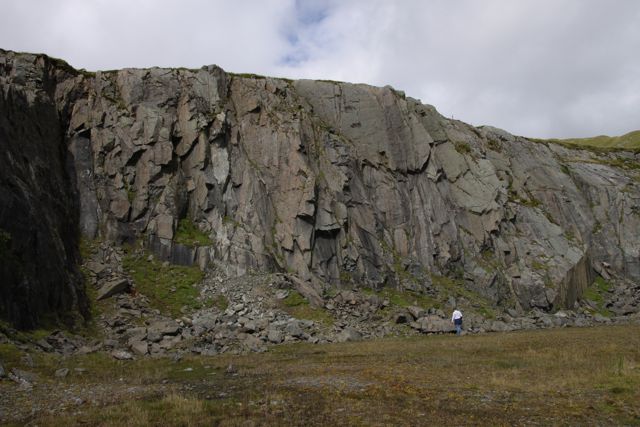 We made a good push up this wee bit and admired the peat hags along the way - now i even know more about how these were formed, one of the group had even written an essay on this! A big hare also flew out past us and then a little frog jumped by as we walked up past the stream - was a particularly evil looking frog in my opinion! As we headed up towards Meall Garbh Fi was a bit horrified that we still had a quite a distance and ascent to go - i couldn't possibly repeat the profanities! (she's not really a mountain goat at heart!). Things were made better when she realised that this little jaunt would require a tiny bit of scrambling. This was my favourite section and loved going up this rocky bit and realise that my hill skills are indeed beginning to improve, my hill head and sense of adventure are also now back in full force. But also very glad i was going up and not down this wee bit

Walking up to the peak of Meall Garbh was great and all of the group were pretty motivated at this point. The wind picked up now and it got pretty blustery up there and we could see rain off in the distance but still plenty away from us. We carried along the ridge and descended down past the wee lochan and then off up to Meall nan Tarmachan itself. Once at the Cairn the obligatory pictures were taken and the hats put back on (for some reason the big fur hat had not been worn for the full duration of the walk!). G now declared it was time to get off the hill and head to the pub but we were taking his shortcut as it was more interesting - oh good! H just rolled his eyes at this and prayed for a quick ending. As we headed down towards the dam we stopped to munch on a few wild growing blueberries - which were fantastic! H got bored off walking and took the faster if a little more unconventional way on his arse down hill 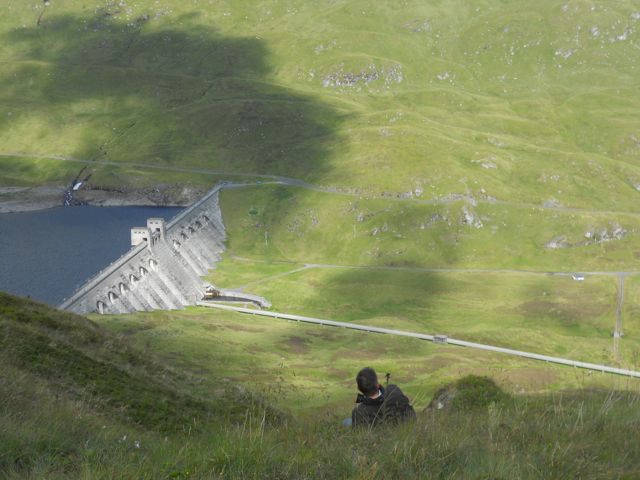 The rain was starting to head towards us now but still we headed straight for the dam to walk across that and then join the road and head back down to the car. Somehow my phone died on the last bit so the last section of the walk was not logged - but managed to get most of it tracked. Great day was had by all and topped off with a few beers chilling on H's deck before we wandered down to the pub for some quality food - and then across the road for more beers and ghost stories! 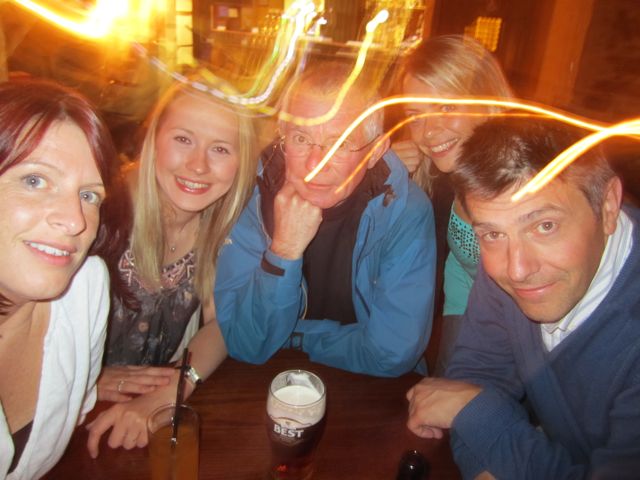 G's stories from Ben Alder cottage were good enough to scare the crap out of us all - will never stay there - ever!

anyone else heard of the ghost and hauntings in Ben Alder cottage?? I have to say G is not usually a frivilous man or a wimp so i took him seriously!!!!!!!!!! 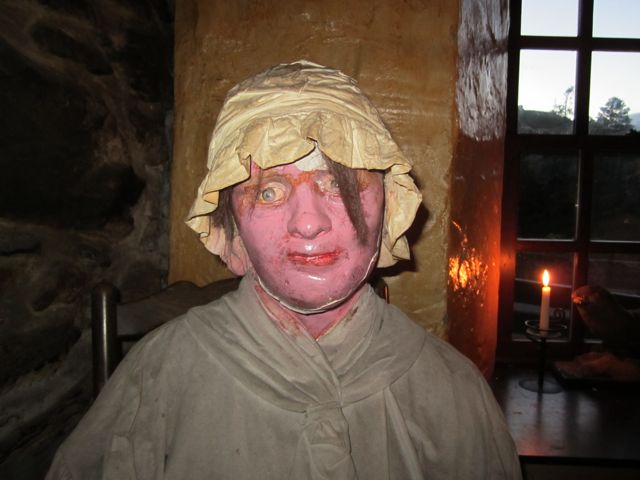 TarmachanRidgeAug2010.gpx Open full screen  NB: Walkhighlands is not responsible for the accuracy of gpx files in users posts Ben Alder cottage - was the story about someone staying there and hearing furniture being moved about in next (EMPTY) room ?

we saw you on the way home from Glen Lyon when we climbed Stuchd an Lochain, you had just came off the dam, I remember the hats!

we saw you on the way home from Glen Lyon when we climbed Stuchd an Lochain, you had just came off the dam, I remember the hats!

ah funny! i'm guessing we looked like a right bunch of eejits!

The fur number stole the show i think

Yeah the story was about hearing the banging furniture!! apparently there were 5 guys - 3 in one room and two in other - they all ended up in same room hearing the noise from the empty room!!

Only stayed one night in Ben Alder cottage
Shared the bothy with two anglers
We had kind off settled down for the night - good fire blazing- drams to hand
When all of a sudden late at night the door flung open - three shocking apparations came in.
Horrible they were - dripping a terrible fluid all over the floor.

LOL magicdin - lovin' your ghost story - that one convinced me....and maybe a trip to that bothy could be quite interesting