My parents were up for their summer holidays, and although they were staying in Cannich, they had spent much of the week around there, and wanted a foray out west. Dad was keen on Ruadh Stac Beg while mum was going to follow the Kinlochewe mountain trail. I took the bus to Beauly to save them going out of their way, and we were in the Beinn Eighe visitor centre carpark for lunchtime. 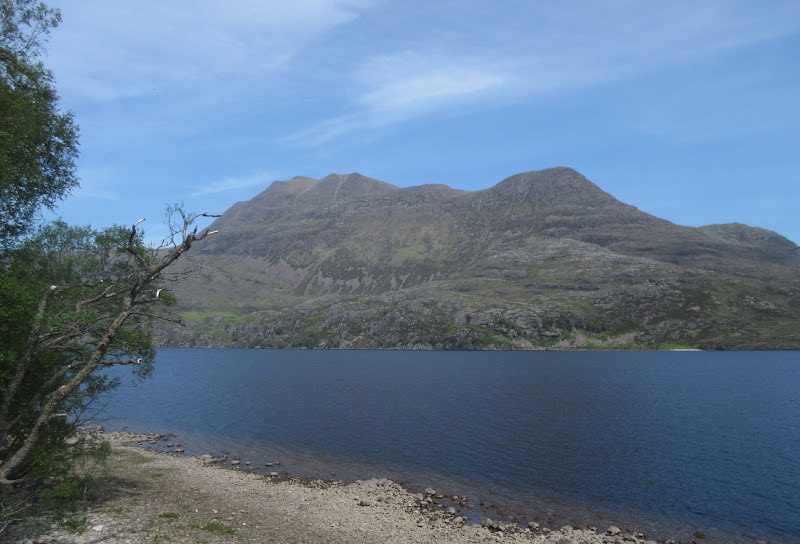 We were intending to do most of the mountain trail as well, although looking back, the logic behind this (all starting and finishing in the same place) was a little wooly. Anyway, we headed off up the mountain trail at a faster pace than mum as we had further to go.


rsb.gpx Open full screen  NB: Walkhighlands is not responsible for the accuracy of gpx files in users posts
Alternatives I'd suggested for today were Beinn a' Mhuinidh and Slioch, both of which looked fine across Loch Maree as we gained height. 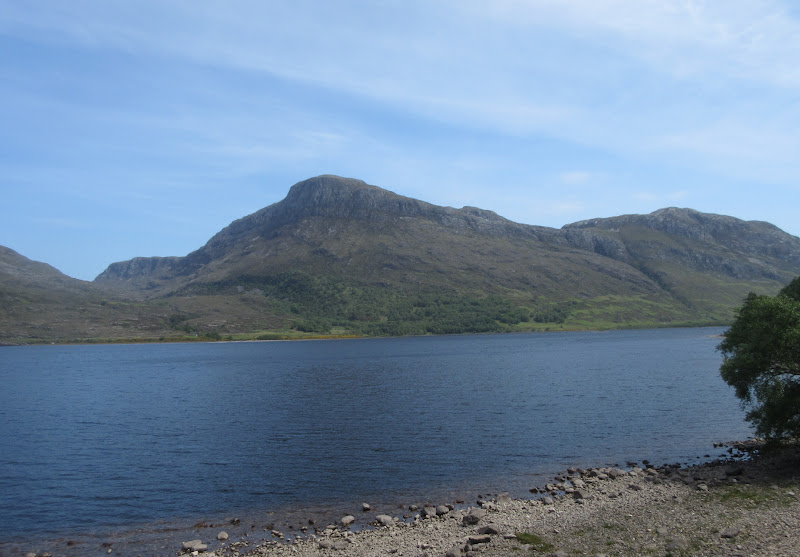 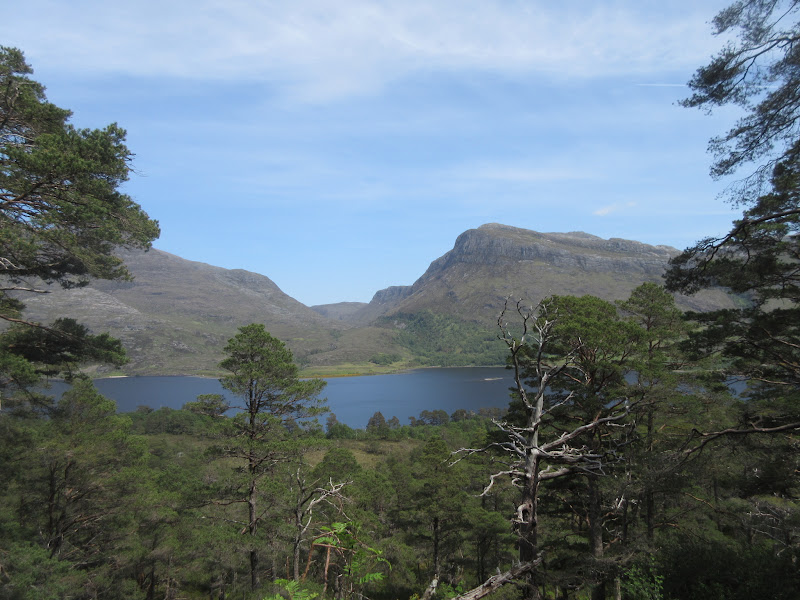 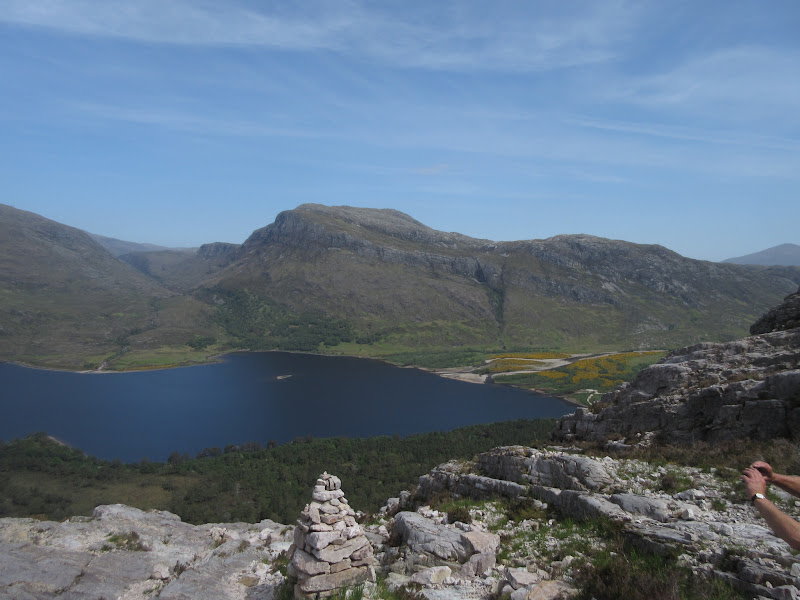 We had our first break at the top of the mountain trail - it was lovely and warm despite the occasional gentle breeze. A drop down to the col and the top of the stalker's path was easier than usual in the dry conditions. I decided that we wanted to stick to the broad shelf to the SE of Allt Toll a' Ghiubhais, which had been an easy stroll on my previous couple of visits. However this time there was no snow and the going was a little harder over angular stones. 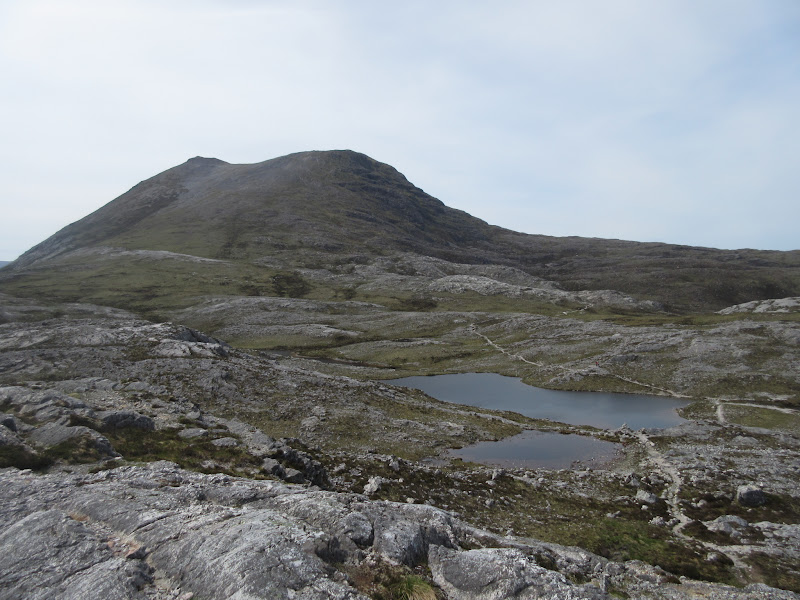 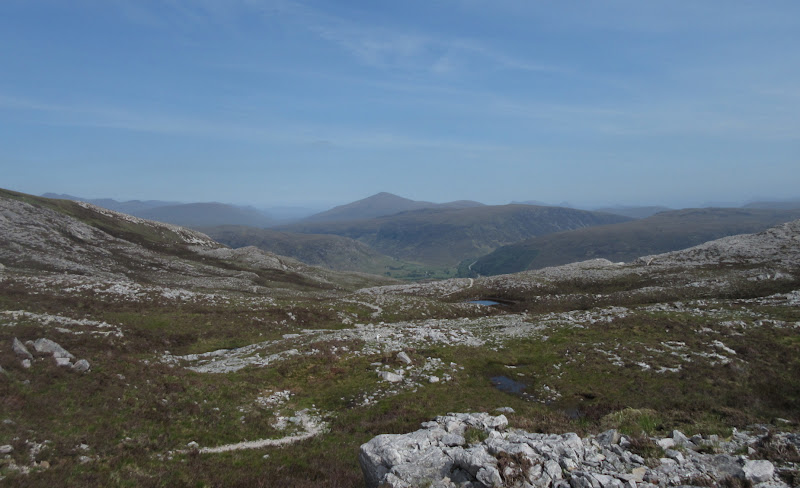 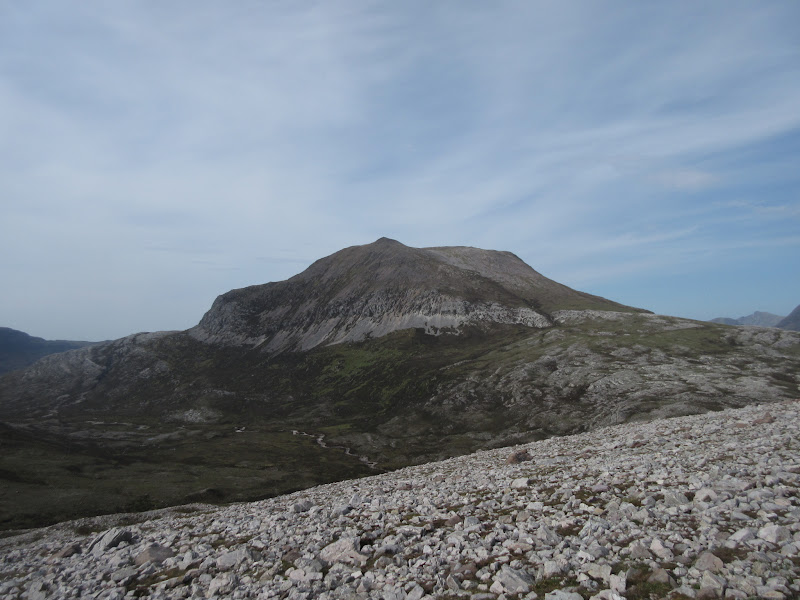 Looking out of Coire Ruadh-staca: 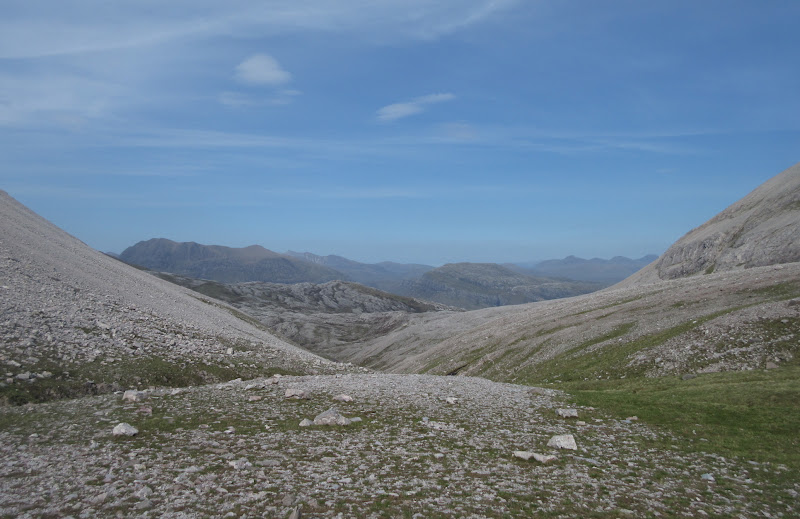 Near the head of the corrie, we crossed the stream by a large boulder and enjoyed the last of the grassy cover up to the col between Ruadh Stac Beag and the rest of Beinn Eighe. 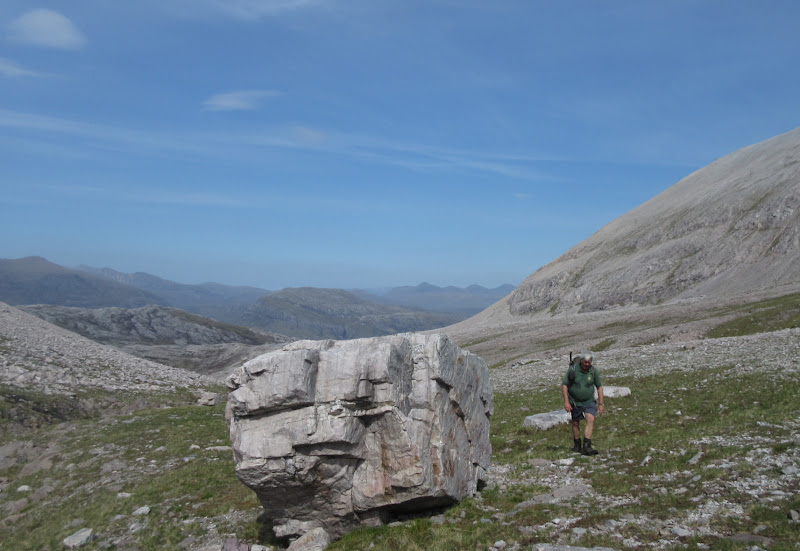 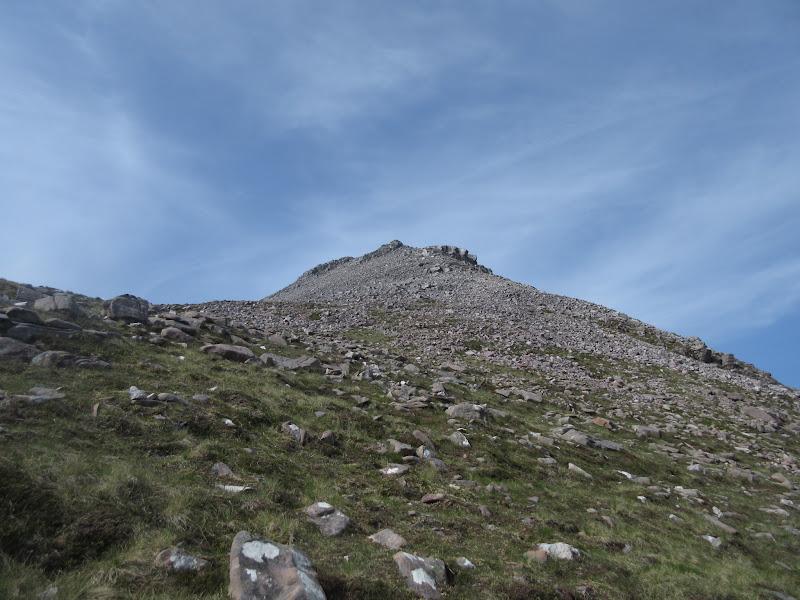 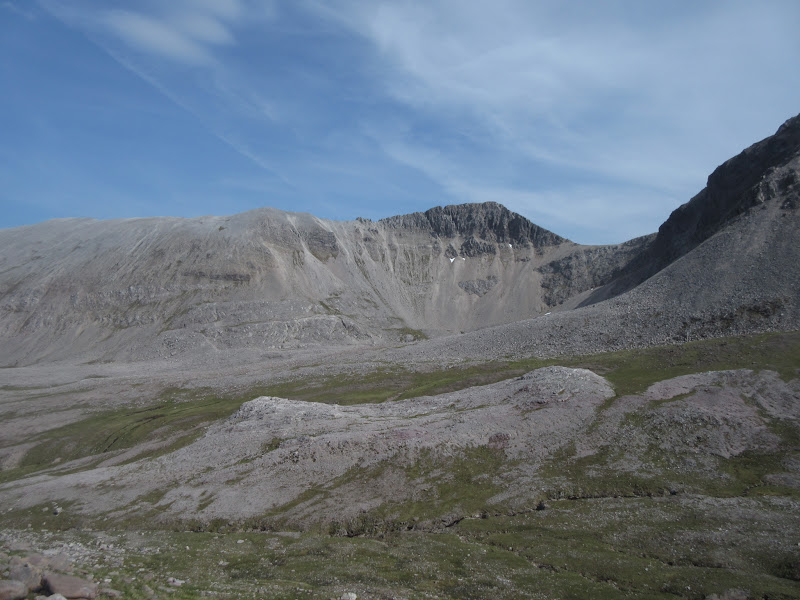 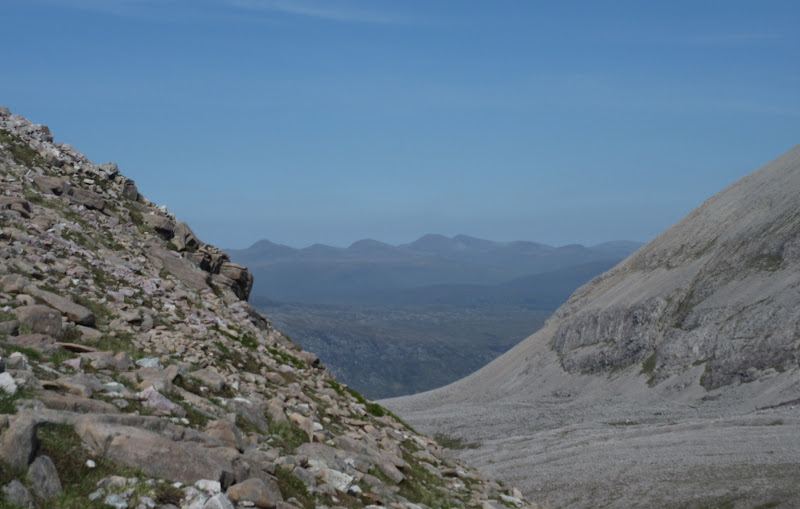 Before too long, grass turned back to angular blocks, this time much steeper. Again my previous visits in the snow had probably made this easier, but bar a couple of loose sections, it wasn't too bad. Easy scrambling higher up circumnavigated most of the loose stuff, even if some of the blocks we scrambled over didn't appear to be attached to much... 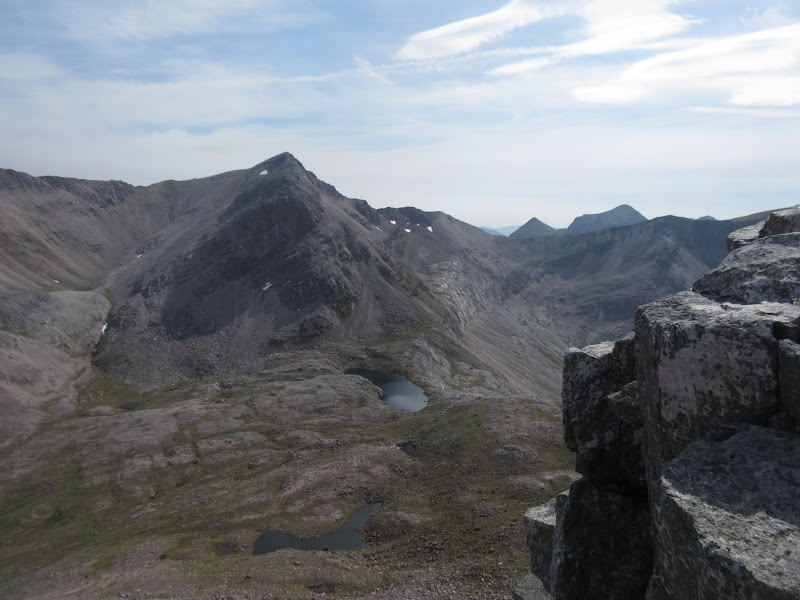 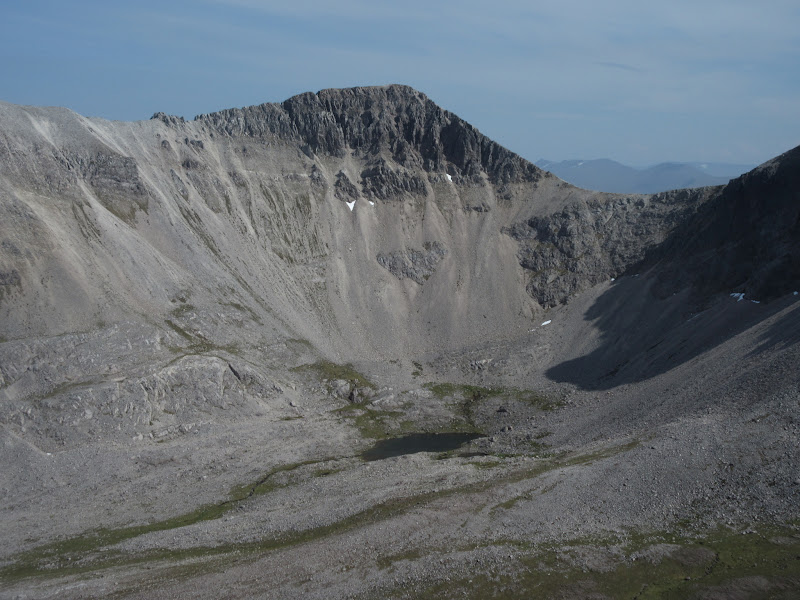 Dad near the summit: 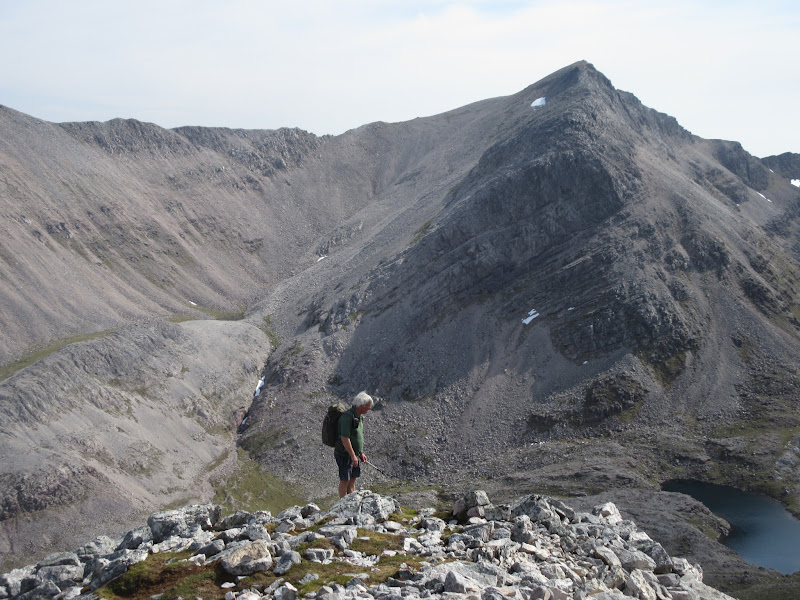 The almost flat walk across the plateau is more awkward without snow as well, as the angular blocks don't give up. However on the north side of the summit was a lovely expanse of short grass, just designed for a long break. 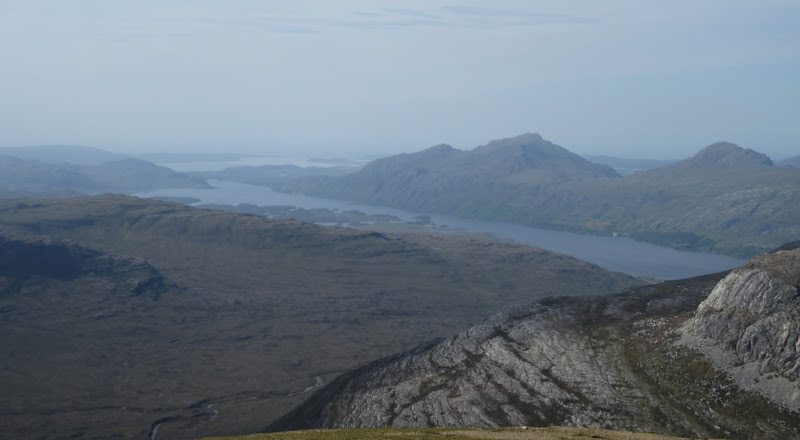 Meall a’ Ghiubhais from the summit: 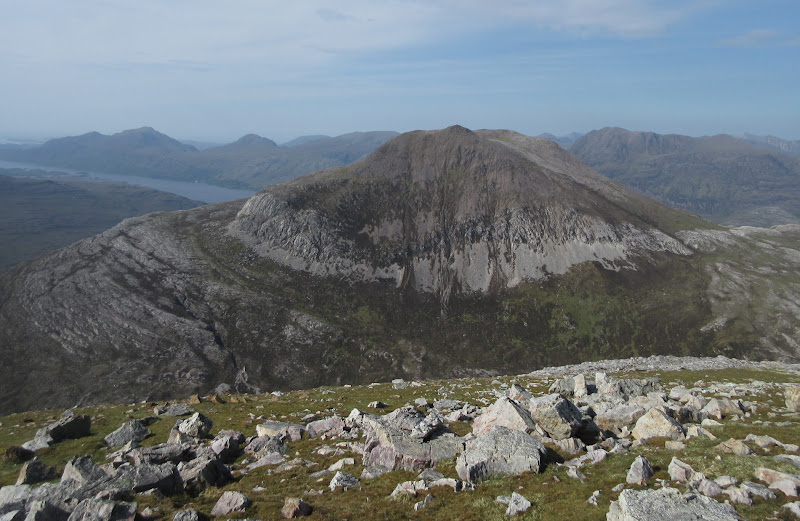 I spent a bit of time wandering around, but the more distant views weren't great due to the haze. 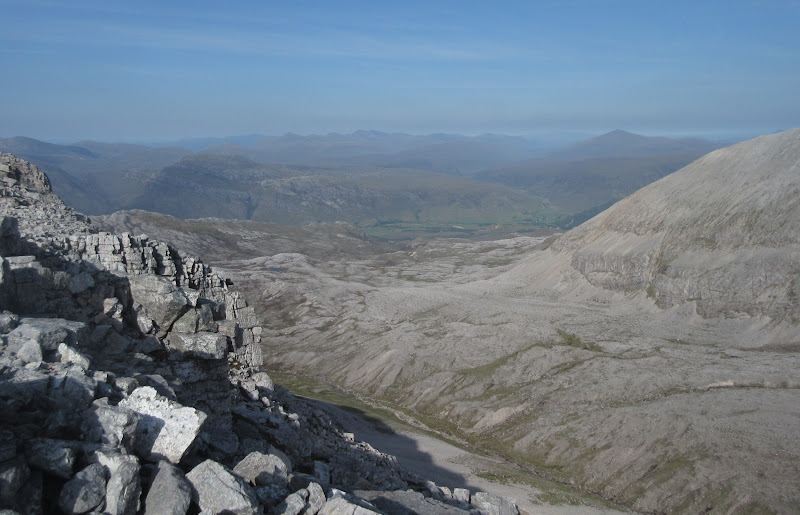 We decided to descend the same way as I hadn't sold the NW ridge very convincingly. Mind you, dad may have changed his mind by the time he got to the col, as he had a bit of a hard time on the scree. I was down a fair bit quicker, so had time to look at the lochans at the col. A hazy day had turned to a fine evening - the col would have been the perfect spot for camping. One of the lochans had dried up completely - interesting to walk through. 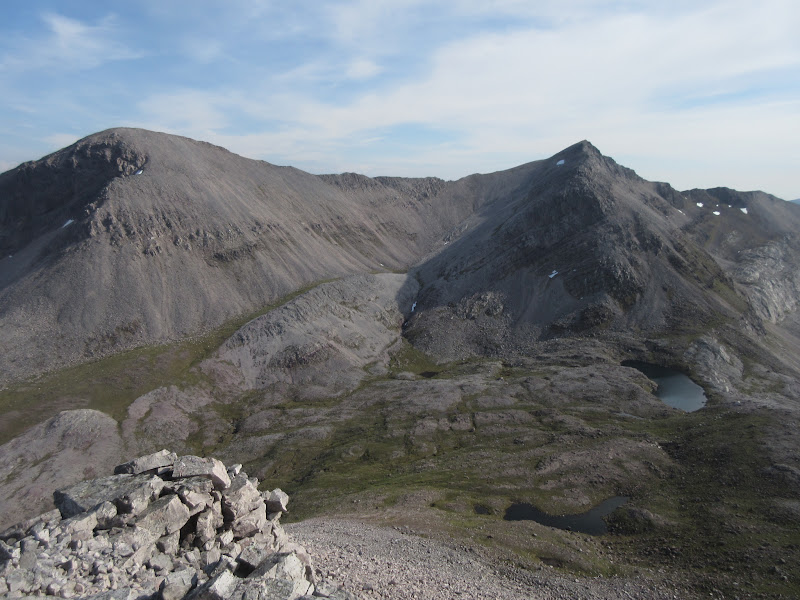 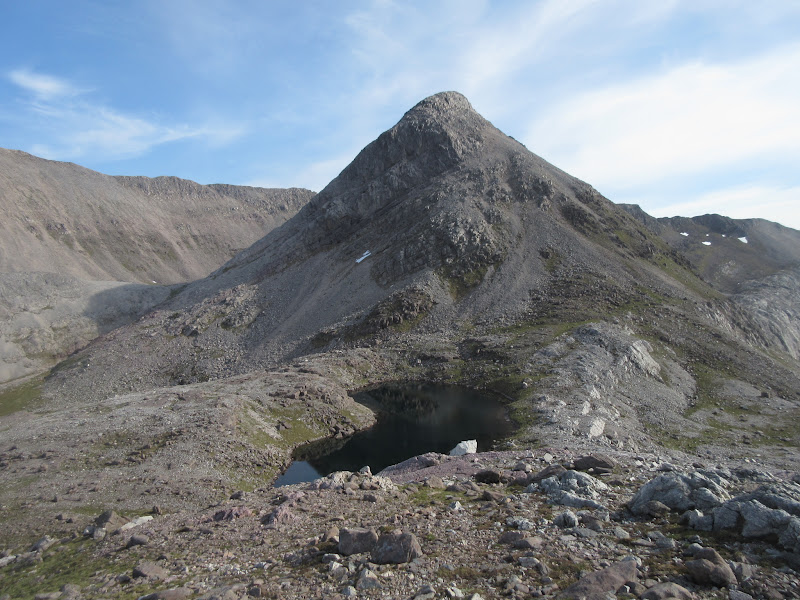 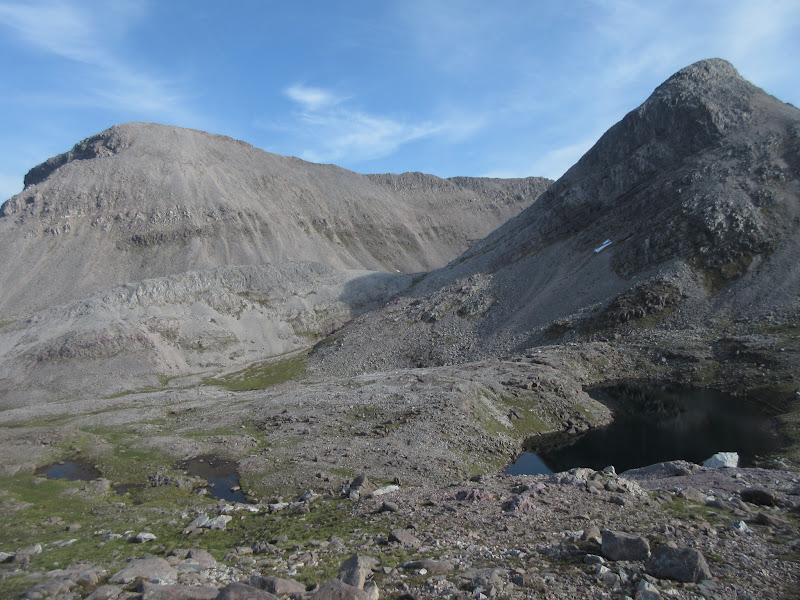 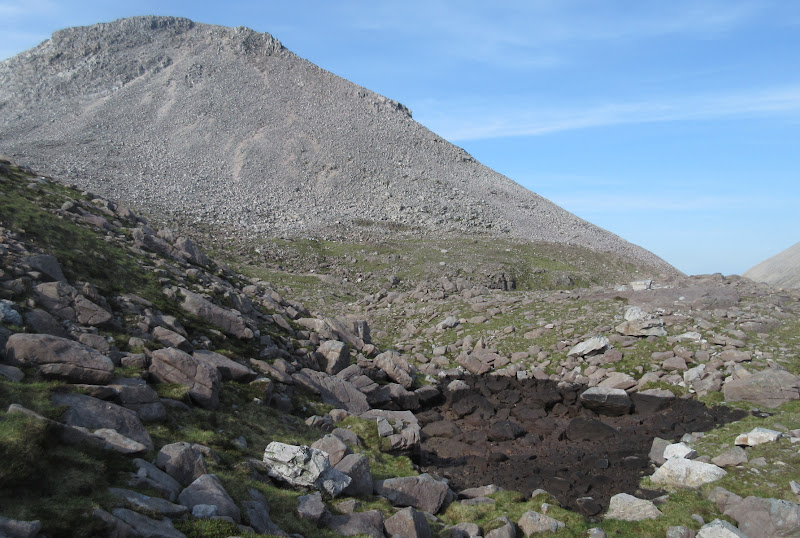 Once dad caught up, we followed a path along the burn rather than higher up, which was probably easier underfoot. We dropped a little lower than the col, and the climb back up to the mountain trail was through a maze of humps and bumps.

Heading back out of Coire Ruadh-staca: 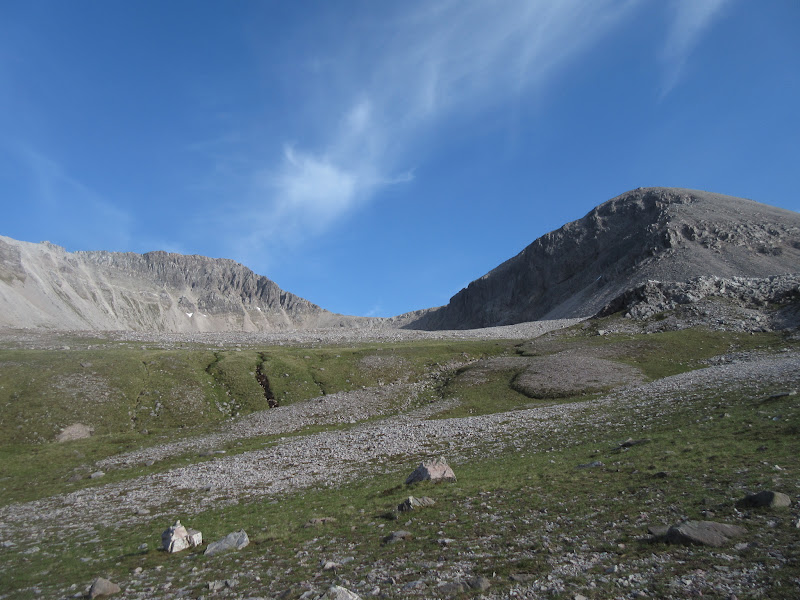 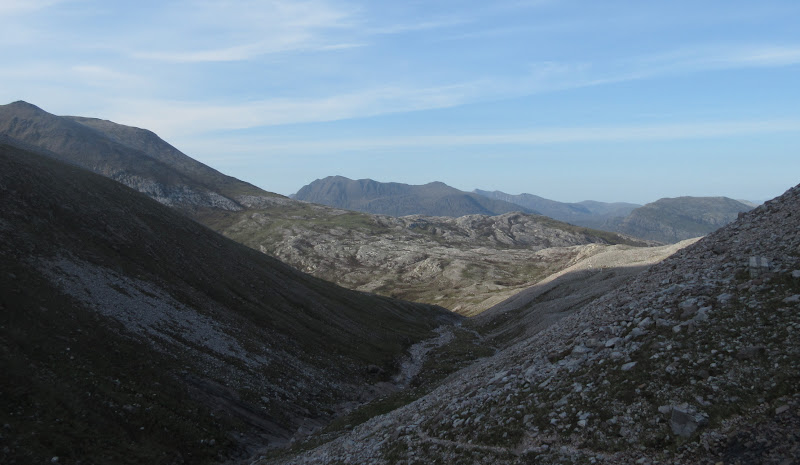 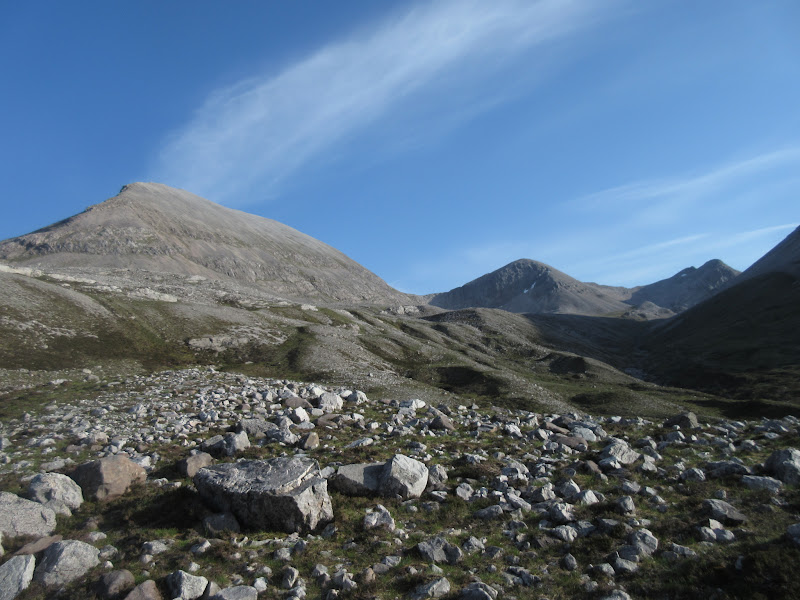 …and back up to the Mountain Trail: 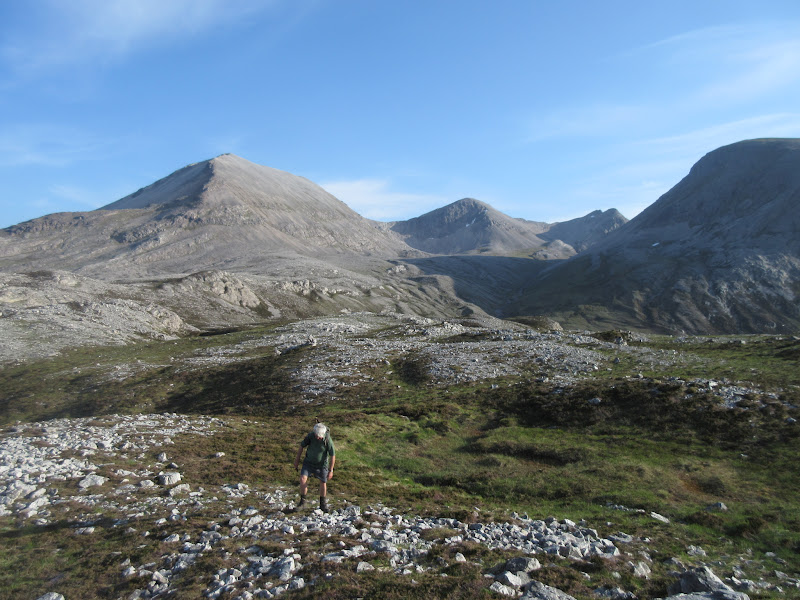 Up at the loch next to the trail, we were unsure about the birds that were circling around above us. Dad reckoned they were Silver Plovers, which I hadn't seem before. 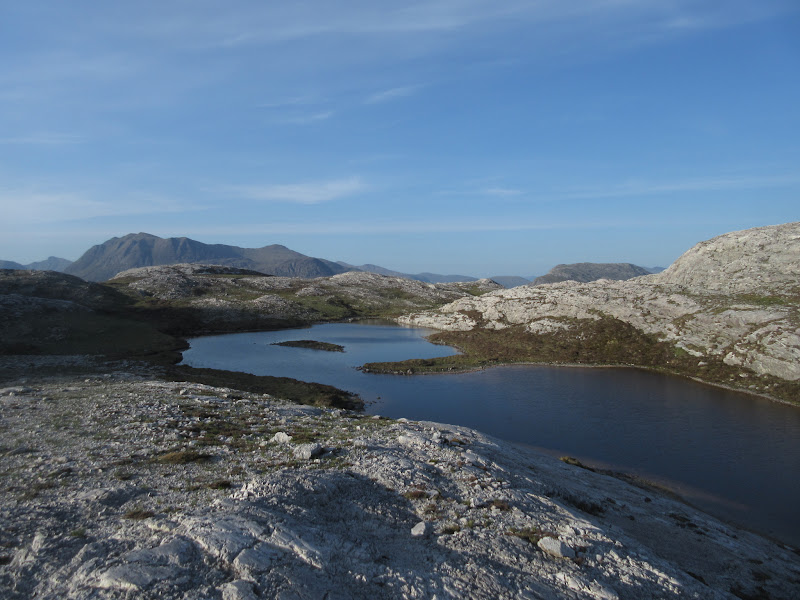 Dad was getting grumpy on the way down the trail, and starting to trip over the odd rock. He has never been a fan of walking over loose rocks and scree (who is?), but he was noticeably slowing down compared to 5 or 10 years ago on that sort of terrain. 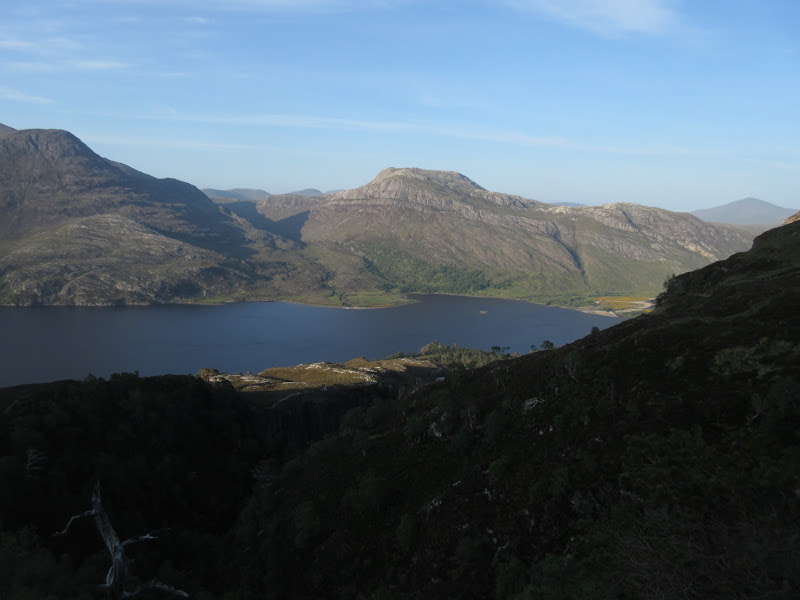 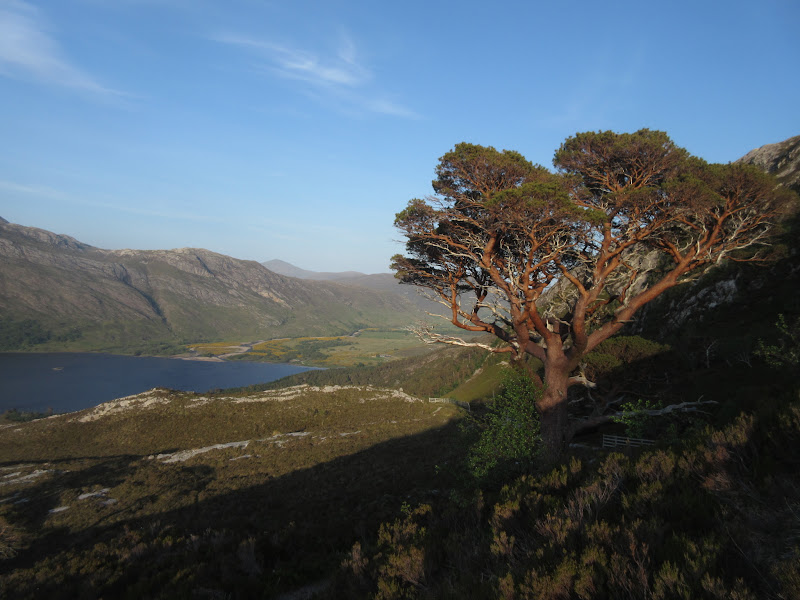 It was after 9pm when we arrived at the car, but it had been a great afternoon out.