atholl simplified.gpx Open full screen  NB: Walkhighlands is not responsible for the accuracy of gpx files in users posts
Half Term in the middle of AS exams gave us a week's holiday. We decided to meet up with Shish at some point in the week to tackle the Ring of Tarf. Studying the weather forecast, we were promised a lovely day on Monday and the forecast for thereafter was not very nice but with low confidence in its accuracy. We decided Monday was the day to go for, as at least we were promised one beautiful afternoon and for the rest we would take pot luck. So the plan was to meet at the Co-op in Pitlochry for a bit of last minute shopping, to partake of Fish and Chips and then to head to Old Bridge of Tilt.
I recommend the F&C at the Plaice to Be just down the road from the Pitlochry Co-op very nice it was too and freshly cooked for us. We sat on a low wall opposite the co-op like a bunch of hooligans eating our grub in the sunshine.
By the time we set off from Old Bridge of Tilt car park it was nearly 3 o'clock and our plan was to go over the top of Beinn Dearg and camp somewhere on the way down the other side. As others have said it is a long walk but the climb is pretty gentle until the last wee bit. We set off through farmland first with lovely buttercup meadows, then through the beautiful woods with some lovely old bridges over the river and then up onto the moor. 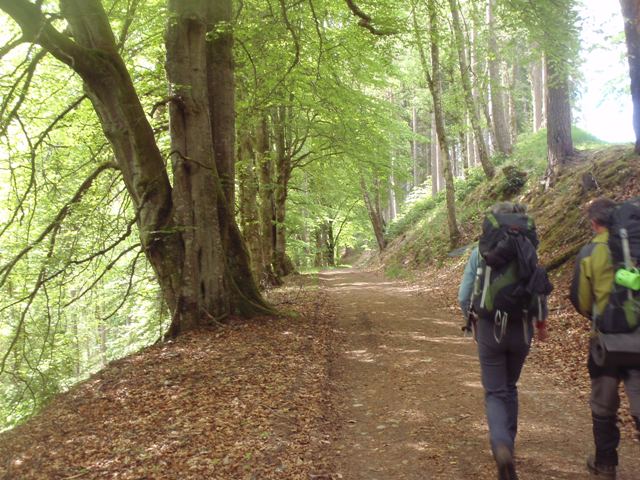 lovely woods in the afternoon sun 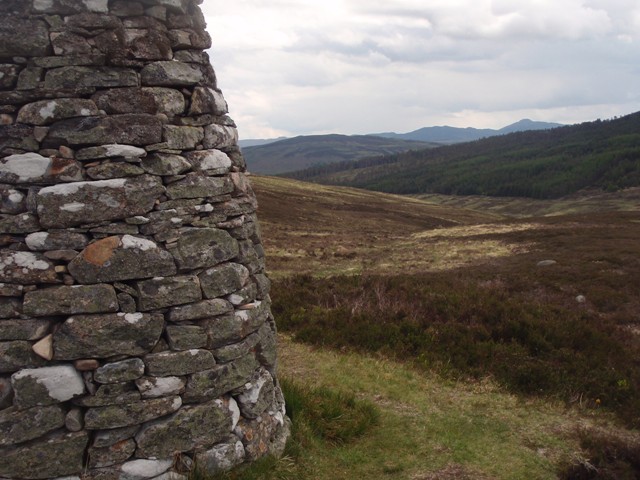 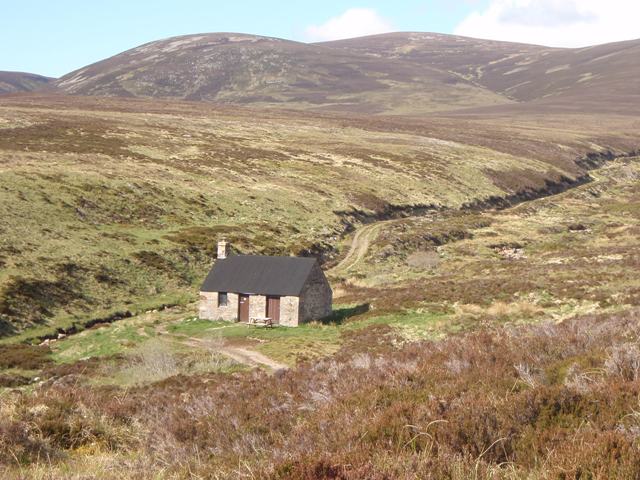 A track goes all the way to beyond the Shiecheachan bothy at about 630metres, where we had a look round and a snack in the sun, then a path all the way to the top. 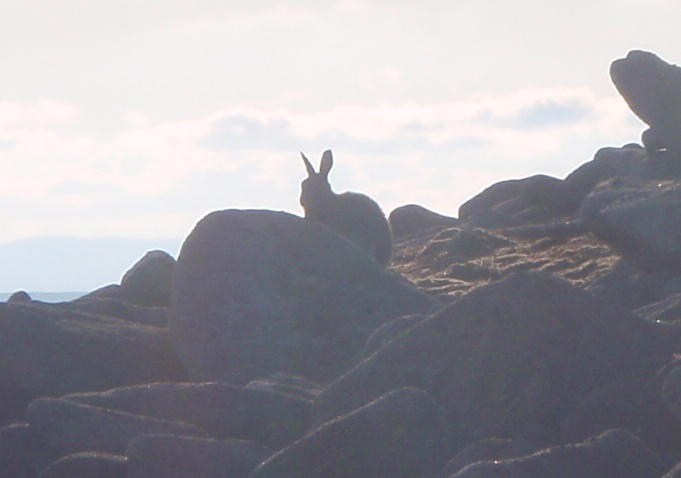 mountain hare near the summit. 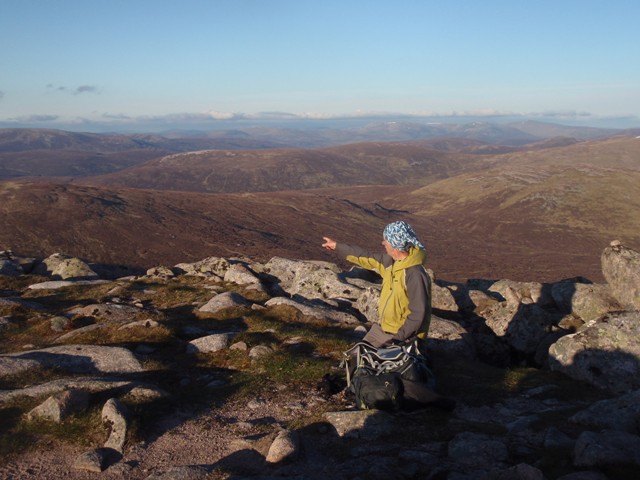 pointing out the different hills from the top

We reached the top about 8pm feeling pretty exhausted although it was an absolutely gorgeous evening we were ready to find a place to stop and ready for food. We followed a path north from the summit which found a nice way between rocky outcrops on the East side of the hill down to the col between Beinn Dearg and Elrig'ic an Toisich, where we hoped to camp in the small corrie to the north of the bealach. We found a lovely flat smooth area in the middle of a bog, close to a small spring with running water

There we pitched our tent ate our meal and collapsed into bed as it was getting dark. 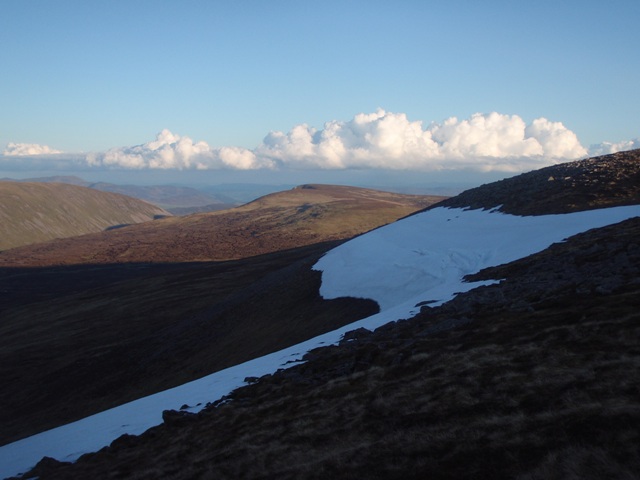 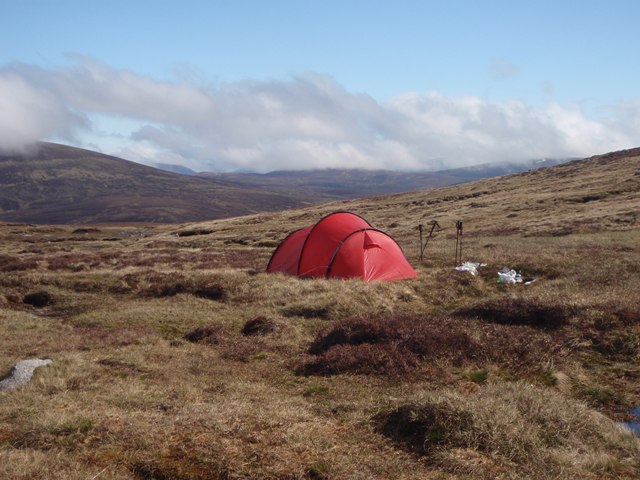 camping among the hags; lovely morning 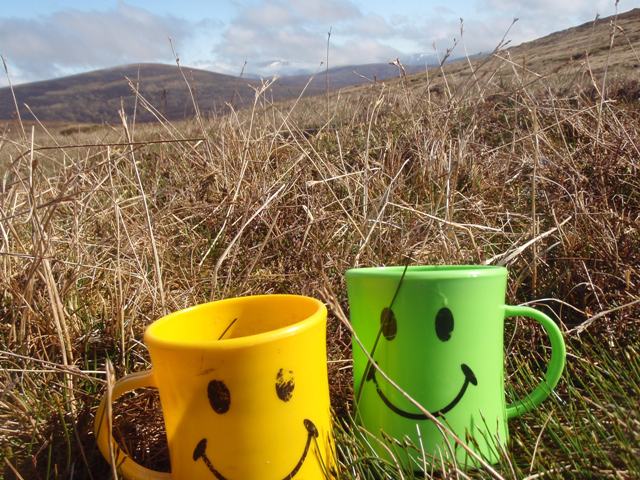 The next morning the forecast was for low cloud with a possibility of rain or very heavy showers. During the night I got up to find the tend shrouded in clag, but lo and behold, after a really sound sleep we woke at 8.45 to glorious sunshine! All feeling much the better for our sleep we enjoyed a leisurely breakfast and set off over trackless ground to cross the Tarf Water without any problem at all. 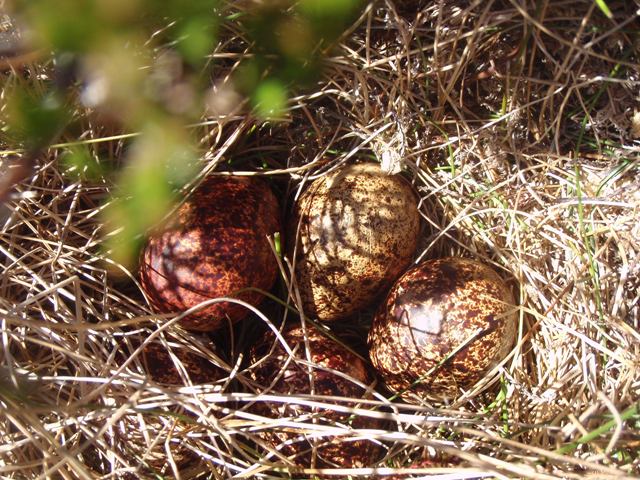 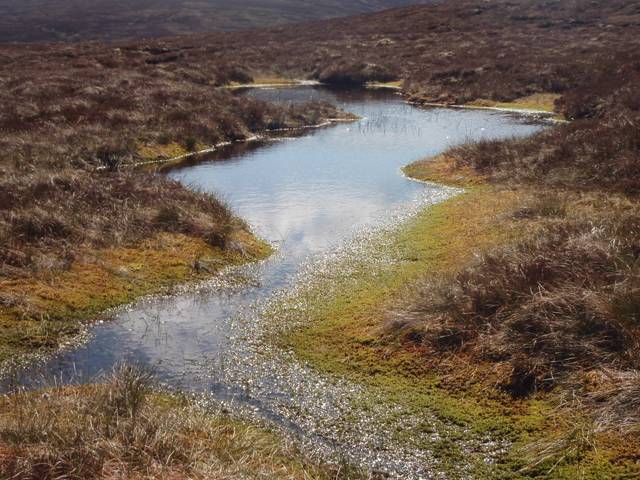 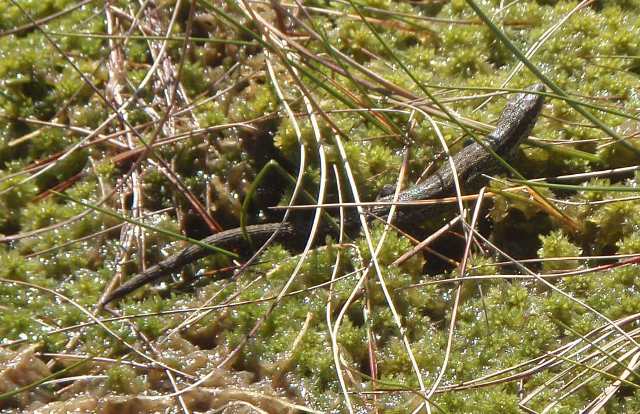 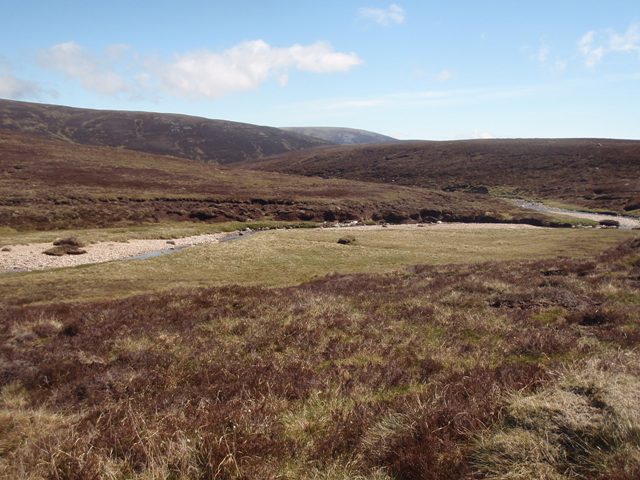 It was a beautiful day and very dry underfoot which was a blessing as we were walking over potentially extremely boggy ground. We took a gently climbing route up the west bank of Glas Feith Mhor, then crossing over and skirting Meall Tionail na Glais Feith up to a pt. 824 and thence up to the top of Carn an Fhidhleir where there were traces of path for the final section. 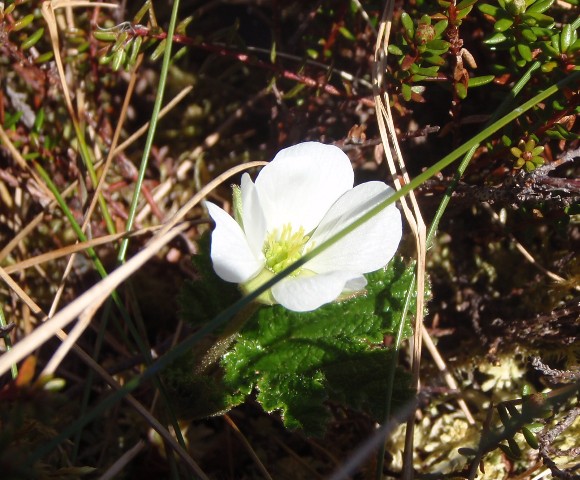 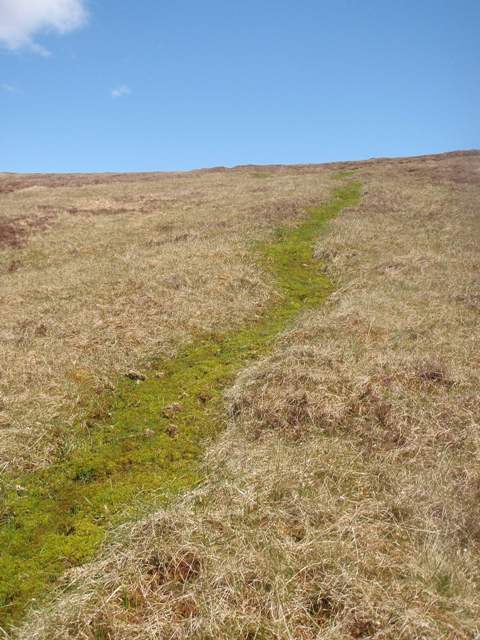 Don't walk here, it is NOT a path, it is a burn filled with sphagnum moss! 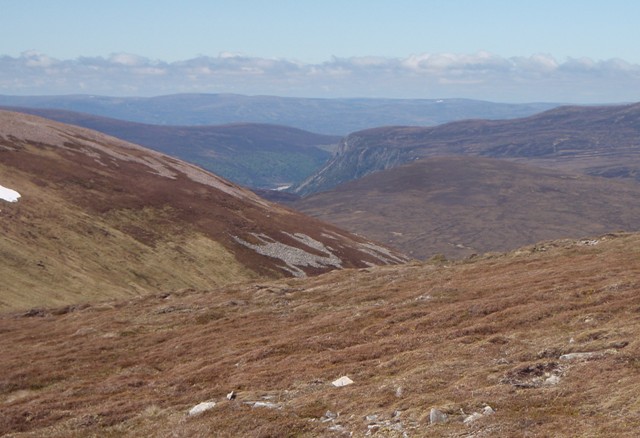 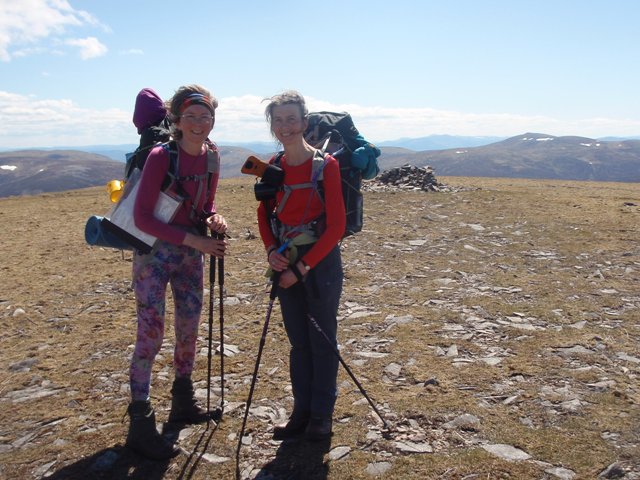 Me and Shish on top of Carn an Fhidhleir 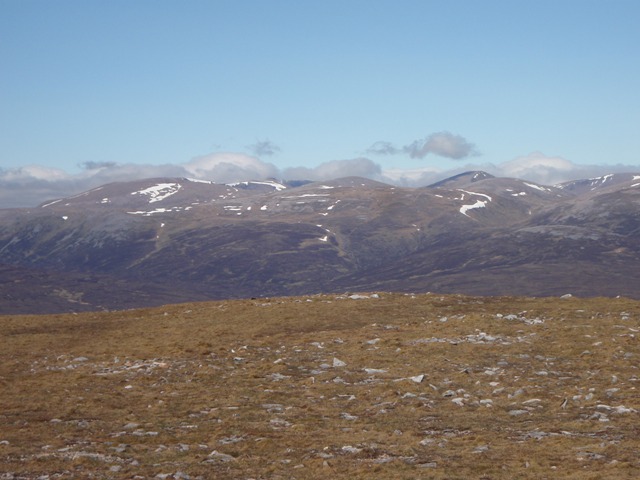 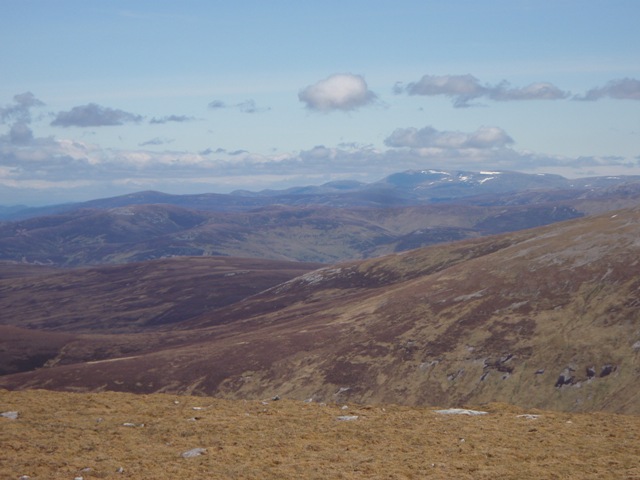 and looking over to Lochnagar

From here to An Sgarsoch is probably the steepest part of the day. By this time I was beginning to notice a pain in my right hip (greater trochanter area) but as we were as far from home as we could get there really was not much to be done about it except keep going which of course I did, being a brave soldier!
Coming down the broad ridge from Carn an Fhidhleir was lovely, and then we crossed a small snowfield which was quite slippy and slushy, and steeply down to the bealach, very haggy but thankfully very dry, and lower than I really liked it to be! Then the steepest part of the whole trip the 300m back up to An Sgarsoch. 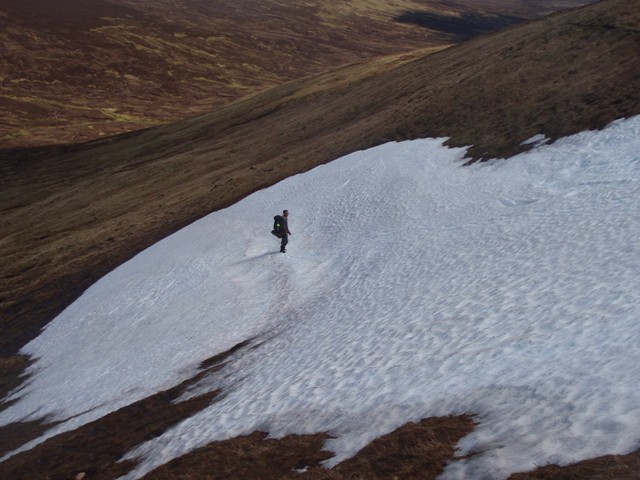 Rudolph enjoyed glissading down this snow - me not so much! 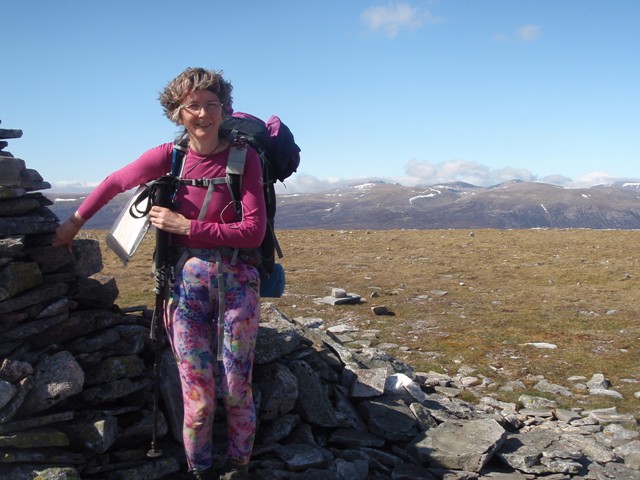 me on top of An Sgarsoch - what a clip! Mrs Santa has attempted girly but it does not really work!

The SMC guidebook suggests taking a direct line off the south ridge of An Sgarsoch to aim for the Feith Uaine bothy (Tarf Hotel) which is what we did. In mist this would be fine but actually having excellent visibility made it much easier as we could see the best line avoiding most of the peat hags on the lower slopes, crossing Allt a'Chaorainn and walking upstream for a bit to cross the Tarf Water near the bothy. The river was pretty low, but Shish managed to slip on a rock and fall in! she lost no time in getting up again and sadly there was no picture! but she was unhurt only a bit of dented pride. By this time I felt I had gone far enough and my hip was really sore so we found a lovely camp spot at the confluence of Feith Uaine Mhor and Bheag. As the sun went down a single midge found its way to our spot but then a wee breeze got up and blew it away. It would have been nice to have gone a bit further upstream closer to tomorrow's destination but it was not to be. 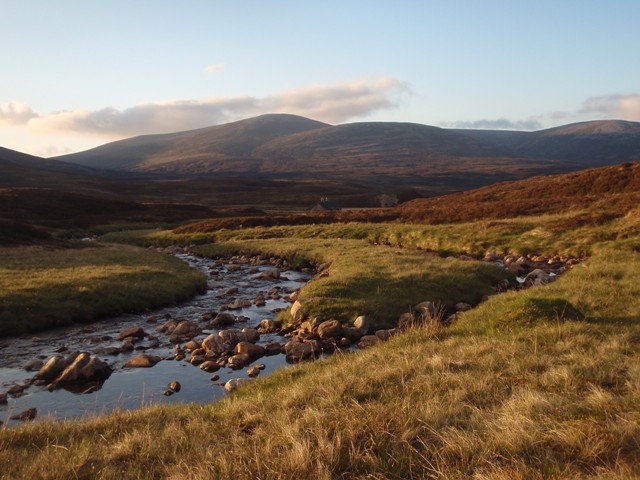 From our dining room in the evening light - lovely! Feith Uaine bothy just there.

After another really lovely sleep we woke at 7.45 this time again the sun was shining and we were delighted! There was a northerly breeze but not too strong and we headed directly uphill following the Feith Uaine Bheag up betweenb Meall Tionail and Conlach Bheag to the summit of Carn a'Chlamain. There were some lovely green camping spots we could have used up this burn, and then the upper slopes were lovely soft short alpine turf, and just a gentle uphill plod to the top. 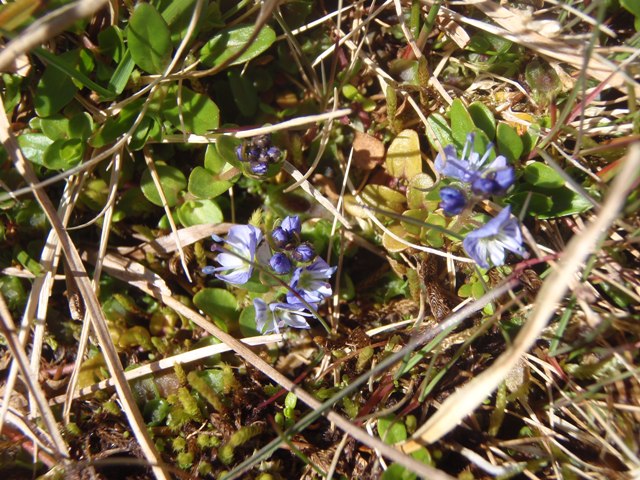 It was cold on the top but just south of the summit we found a nice sheltered spot for a brew and our first lunch - the wraps were still ok and the hard boiled egg still fresh and lovely. 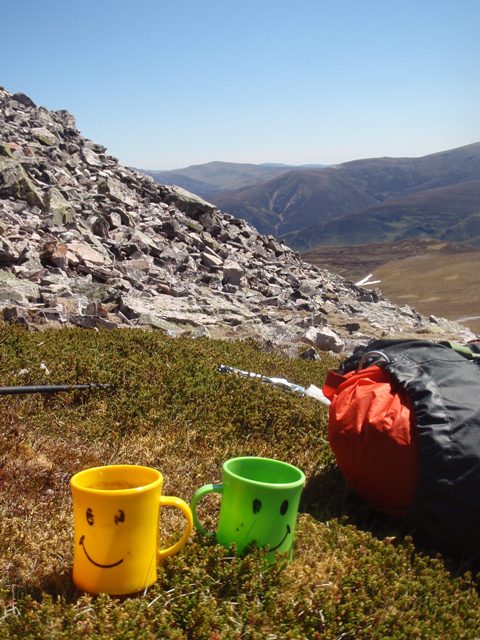 Coming downhill we picked up the old path which joins the new and goes all the way down the shoulder Faire Clach-ghlas for a very long way but with fantastic views southwards across to Schiehallion and the Lawers and Glenlyon hills. It was hot and sunny and we were really glad to reach the floor of Glen Tilt and stop for another lunch spending about an hour resting and dabbling our feet in the river to cool off.
I've run out of attachment space so will add a few more in a second post.

But then we had to set off as it was still a good long walk back to Old Bridge of Tilt. Glen Tilt is beautiful, full of surprises and changing gradually in character as we got closer to "civilisation". ~Another brew up stop was necessary before we could reach home though as now I was really getting some gyp from the hip.
Returning to Old Bridge of Tilt we scooted back to Pitlochry for another Fish and Chip nosh up, we felt we had deserved it! Another four blue balloons and we could not have asked for better conditions what a treat!! I took 224 photos on this trip so picking just 24 is not easy, might post a few more later! 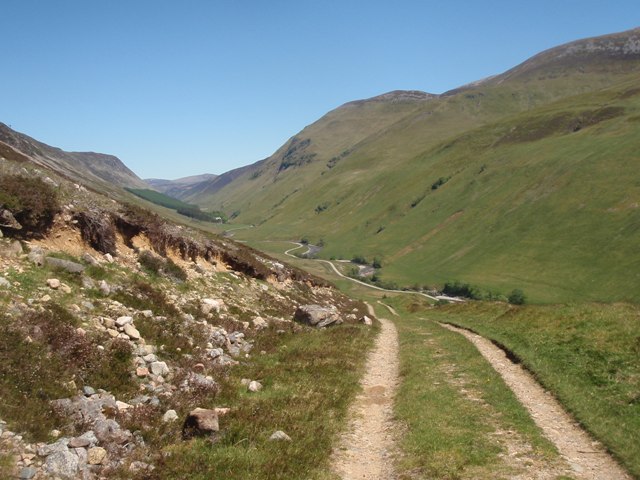 Nearly down to the bottom again - looking up Glen Tilt 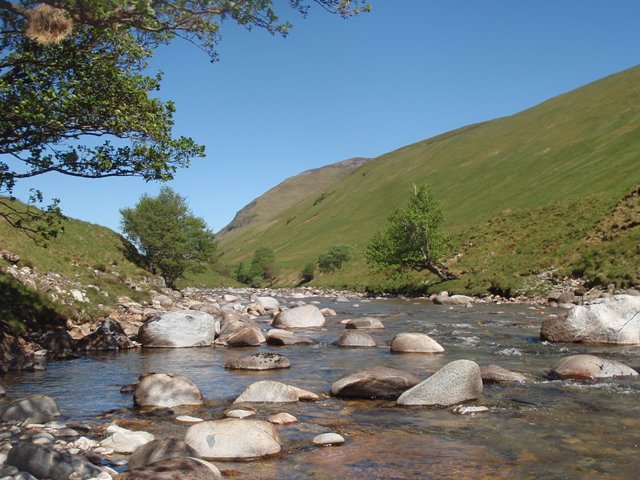 We stopped here for a good hour, drinking tea, eating food and dabbling our hot feet in the cool, clear water. You can see a tuft of grass on the top right stuck in a tree which shows it must have been pretty amazing when in spate. 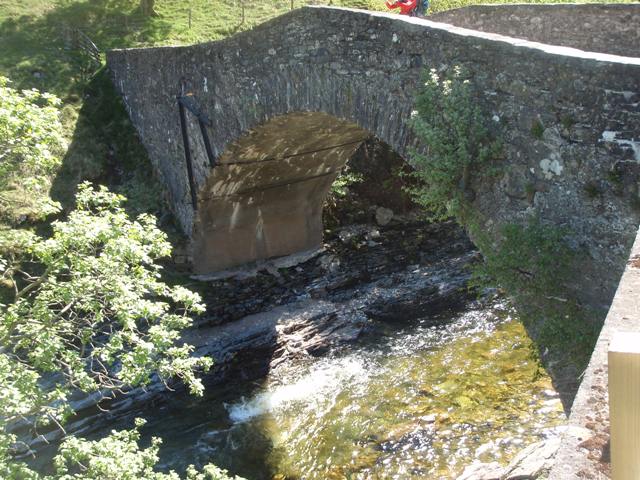 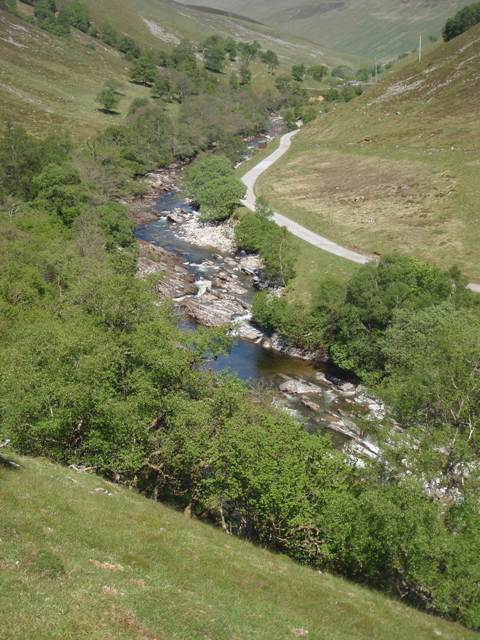 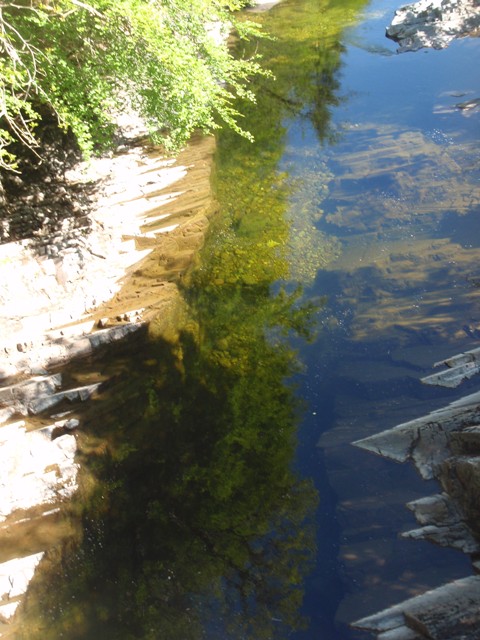 Didn't we have fun?!

Read with particular interest as I walked quite a similar route on 5th to 7th June (the main differences being that I was bothying and took a different course between Beinn Dearg and Carn an Fhidhleir). It's stuck in a queue of walk-reports that I need to get written up.

I was also roasting in the sun on Monday (and resorted to cooling off in a burn), but caught in a heavy shower on Tuesday around lunchtime as I returned to Bridge of Tilt. At one point, there was a lightning strike very close by

(though a long way upslope, as I was near the bottom of the glen).

That is some round to be carrying camping gear, well done

. I was a wimp and stayed in the bothies! I hope your hip is better now.

That is some hike mrssanta & co

I biker hiked them all in three goes

but thoroughly enjoyed them all

Very nice - this is wild country and the hills far apart - and its a very long walk down the Tilt from Forest/Marble lodge. I Think the blue flower is a milkwort.

Very enjoyable and nicely narrated report and brings back a couple of May days we had bothying around Tarf - so near yet so remote!!