Glenfinnan - a quintet of corbetts

Glenfinnan - a quintet of corbetts

Drove up to Glenfinnan and parked the car in the Callop car park. Off down the track and past the power station and houses. Weather was cloudy and hazy but very warm and close.

On to more open ground via the hillwalkers track

Through a gate set at an angle which meant it couldn’t be left open shortly before leaving the track to head up just to the south of Meall na Cuartaige then on to Sgorr Craobh a'Chaorainn. Distant views not great due to the haze.

Then off southwest towards Sgurr Ghiubhsachain

Up on to Sgurr Ghiubhsachain - still very hazy 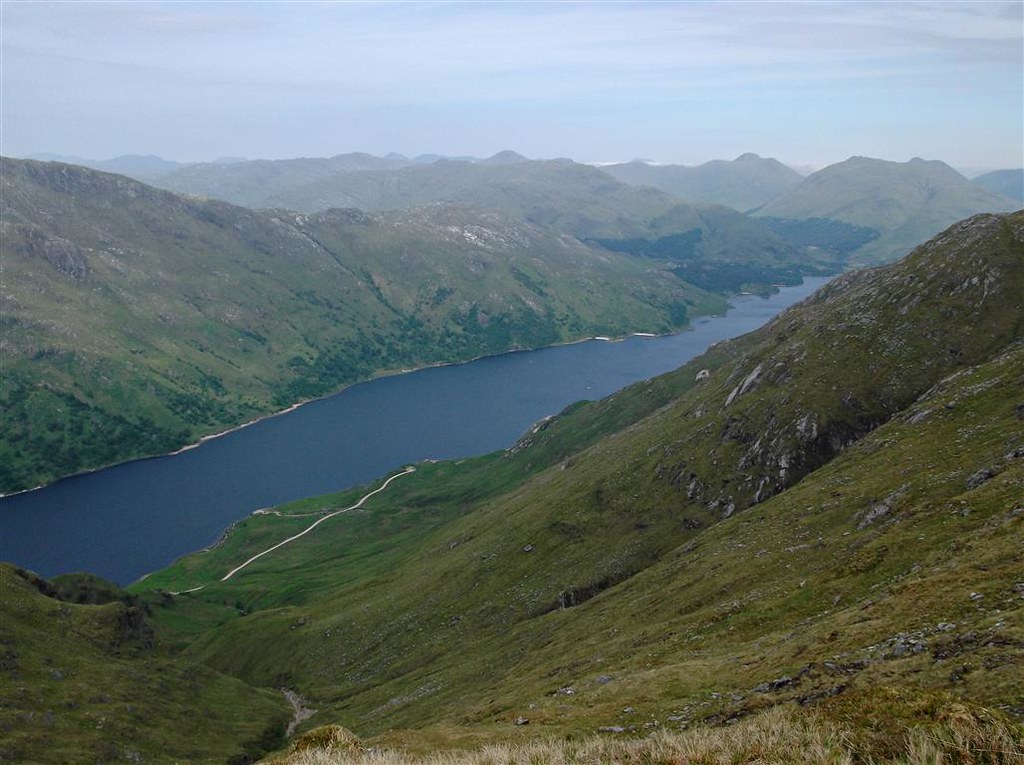 Next - continue towards Meall nan Creag Leac before the drop down to the base of Druim Tarsuinn.

Rather oddly there are two sets of rusty, old fenceposts running parallel to each other down the hill side. Fair amount of drop before starting up Druim Tarsuinn.

Late lunch at the summit before continuing SE down to the bealach - didn’t go on up to Meall Mor but instead headed down towards Cona Glen aiming for the right of some trees.

Once down in the glen, had to cross Cona River - water level was fairly low and this was quite straightforward. Then more ascent to pick up the track back to Callop.

Back in the car park there were two guys struggling to blow up a large double air mattress with a smallish pump - despite head nets, both were suffering from a midge attack. Could see their tent in the trees near the river - given the lack of wind, it looked like the midges would be around for a while.

Got in the car and drove along to the NTS car park - they were in the process of closing and despite waving my membership card had to make do with sitting on the benches outside. Nice evening, a little breeze here to keep most of the midges at bay so had some dinner. As for the previous weekend, needed somewhere for the night at the plan was to head for Sgurr an Utha.

Drove up to the layby just after the bridge over the Allt Feith a’ Chatha, loaded up the large rucksack and set off back down towards the start of the track. It was turning into a nice evening and looked as though the threatened rain may hold off.

Took the right fork and followed the track to its end - then east and north skirting to the west of Fraoch-bheinn.

Nearing the summit the evening light was on the Glenfinnan munros

Erected the tent, wandered around a bit then watched the sunset

Up early for a predawn shot

Then watched the sunrise while having breakfast

Although the early light on the surrounding hills was nice, it was still too hazy to give any decent photos. Got packed up and ready for the off.

Back at the car, swapped over to the day sack and drove back through Glenfinnan towards Kinlocheil before taking the turn off for the A861. Drove along to just past Blaich and the start of the track for Stob Coire a'Chearcaill. There were signs saying no parking so I drove a little further eastwards and parked in a wee layby on the other side of a fence from a pile of logs.

Walked back towards the start of the track at around NN047772

Followed the track southwards up towards Ceann Caol

A wee cairn marks the spot at which to turn to the SW and start to head towards Stob Coire a'Chearcaill. Then just a case of walking SW before the final steeper southerly section to the summit.

Getting nearer the cliffs

Had lunch beside the cairn then lay back for half an hour or so in the sun - had turned into a nice day.

Reluctantly set off back down towards the car

Good drive back down towards Glasgow until about 6 miles north of the bottom end of Loch Lomond - stuck in a long queue and lost about an hour before it cleared heading towards Dumbarton.

That's a sunset and a half and not a bad sunrise.

Now that's a cracker of a weekend adventure

You couldn't have slept much to catch that sunrise!

Fair amount of ascent but at least you only carried the large sack to Utha.

Looked a fab evening for a sunset and sunrise....very jealous

5 more Corbetts, you made the most of your weekend!
Sunset at 22:05 on the 4th and sunrise at 4:32 on the 5th, a short night indeed. But well worth it, those pictures are fab!

dooterbang wrote:You couldn't have slept much to catch that sunrise!

yup - am a very light sleep and never seem to sleep well, frequently waking up, when camping anyway - cheers