It was the day after our Maoile Lunndaidh storm encounter and some of our clothing/shoes was still drying out in the bathroom, but weather looked decent and it was our holidays, so we couldn't resist another trip. Conditions seemed best in the far north. We have already climbed most of the hills here: all Munros and all Corbetts apart from Foinaven (which we are keeping for WH Meet) and Beinn Leoid. I always intended to climb Leoid in combination with the two neighbouring Grahams and a long summer day was the best opportunity for such trip.

With my summer boots wet, I had to wear my winter Brashers, quite heavy for this time of year, but I had no choice! Kevin's rucksack didn't dry overnight either, so he dug up his old one. Apart from some changes in gear, everything went as planned. We bagged all three hills, didn't get wet and as a bonus, we were blessed with wonderful cloud inversion. So here it goes, the Leoid circuit...

WH walk covers only the Corbett and one Graham, Meallan a'Chuail, but a second one, Meall an Fheur Loch, can be added with little extra effort. The starting point is at 358333, limited parking for a few cars only. When we arrived, there was another walker getting ready, but she was planning to do the Corbett only

Track_BEINN LEOID 08-06-16.gpx Open full screen  NB: Walkhighlands is not responsible for the accuracy of gpx files in users posts
We crossed the stream on a footbridge and began climbing on an excellent stalkers path. The path is currently being upgraded with fresh gravel and as we gained height, we discussed how much it must cost the estate! Obviously this is sheer stalking area and it has to bring the owners profits, if they decided to invest in this path. So better to stay away from this route in autumn! We were glad, we came here now, well before stalking season.
The path and the small car park seen from above:

It was a cloudy morning but forecast suggested sunny weather later on, so we entered the cloud with our hopes held high. Originally, we planned to walk over the Grahams, but because the clag was still thick, we decided to reverse the route and to go to the Corbett first, then return along the ridge and over the two G's. Needless to say, it was a brill idea. We had fantastic views from all three summits

But at the moment, we were still surrounded by milky cloud. Navigation would be a nightmare if it wasn't for the path, zigzagging through peat hags, bogs, lochans and puddles. It does really help in misty weather... We followed it till it ended abruptly by a small cairn at 349316. From here one can either climb Meallan a'Chuail or skirt around its western slopes into the corrie of Loch Dubh. We chose the latter, as we wanted to give the tops some time to clear. We navigated carefully, with map, compass and GPS, heading SW over rough terrain. In wet weather this wouldn't be a pleasant experience, but thank heavens, our dry summer means most of the bogs have dried out. After about a mile of hopping over tufts of grass and heather, we managed to find the second path, climbing up into the corrie. The cloud was thinning and I kept my fingers crossed for total clearance: We cought a glimpse of the summit of Leoid emerging from the clag, but then we passed Loch Dubh and entered the thick cloud again. The new path guided us up to the col (564m), then we turned right and followed the final ridge uphill. The path petered out at some point, but navigation was easy now. We passed a small cairn at 650m and soon, the clag started to thin and step by step, we emerged from the milk and into the clear air.
First moments out of the cloud:

It looked like we were going to witness a first class cloud inversion! I couldn't hide my excitement. Meow!

The final 100m of climbing is on more rocky terrain but we could see the summit now and nothing could stop us!

Meallan a'Chuail still "cuddled" by cloud, in further distance, Ben Hee popping out of the clag: The clag was holding on to the east and south of us, but the northern peaks were clag free: Arkle and Foinaven proudly presented their white slopes:

We didn't mess about, headed for the summit. It's got a trig point and a wind shelter: View NE, with Ben Hee to the right of the photo, and the thinning cloud:

To the south, Conival -Ben More Assynt, sticking out of the cloud: Zoomed Conival/BMAssynt, again a bit of cheating with contrast, to enhance the inversion

The cloud looked more like a white sea, with waves leaping against the steep slopes of the mountains. The best way to illustrate the cloud circus around us would be with panoramic photos. North side from Ben Stack to Ben Hee:

2016-06-08 beinn leoid 216 by Ewa Dalziel, on Flickr
We spent some time on the summit despite midges. Kevin studied the map... What's left to do in Assynt/Sutherland, darling? Not a lot, to be honest! We simply couldn't get enough of the inversion, but at some point the cloud simply... disappeared. In 5 or 10 minutes, it burned off completely! It was a signal for us to start the traverse over the two Grahams. First, Meallan a'Chuail:

We descended to the col and then climbed the easy slopes of the Graham. The air was getting more and more humid as we walked... 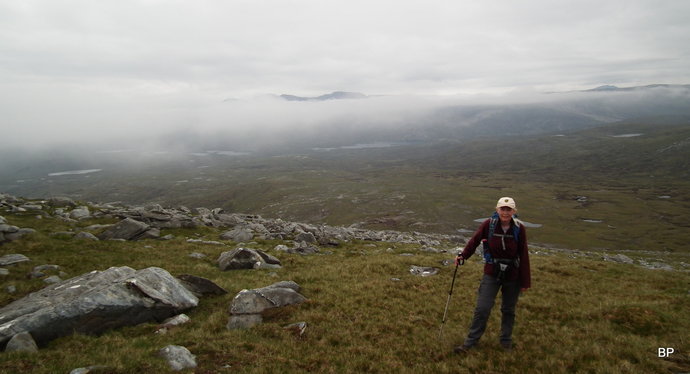 ...but the nature paid us back for the effort, as we were gifted superb views from the summit of the Graham. The best - to the north-east, where multiple lochans dot the landscape: G' number 49, the cairn is perched at the very edge of vertical cliffs: Back to Beinn Leoid and the remnants of the clag: 2016-06-08 beinn leoid 243 by Ewa Dalziel, on Flickr
The descent from Meallan a'Chuail goes along the shoulder in the middle of this photo. Some very easy scrambling on the way down, but we didn't stick to the path, so it can possibly be avoided.

Looking back up Meallan a'Chuail from half way down the shoulder:

Our last target for the day, Meall an Fheur Loch. It just about makes the Graham list, both by height and re-ascent. In this picture, it looks like an insignificant, boring lump in the ground:

Even Ben Stack, thanks to it's pointy shape, looks more interesting!

Arkle and Foinaven. I can't stop thinking about Foinaven, it's going to be an epic climb, I know! Can't wait to walk this ridge!

We stopped by the loch for a few minutes, enjoyed the solitude and the silence. This is not a very popular circuit, especially the Grahams...
View north from Loch Cul a'Mhill:

It didn't take us long to reach the summit of the last target hill, here we sat for a longer time, enjoying the views, now clear in all directions. Only at some point I realized, it was our 50th Graham! I never expected to bag half a ton of G's, I always treated them as "training ground" for more difficult mountains, but here I am. If I ever get to 100 G's, I'll consider myself lucky!

Meall an Fheur Loch is a good viewpoint, but apart from that, it lacks any interesting features, no hidden lochs or vertical drops anywhere. Yet it makes a nice addition to the circuit with little extra effort.
Ben Hee:

Meallan Liath Coire Mhic Dhughaill (left) and the two Grahams I haven't climbed yet: Carn an Tionail and Beinn Direach. They can be combined together in a longer walk, so this is another route for WH meet: To return to the stalkers path, we descended the northern slopes of the Graham, past a wee lochan. Views on the way down - priceless:

Just before we left this forgotten corner of Scotland, we had a last look at the hills we just climbed:

I felt a bit sentimental... This trio is much neglected, even by hill baggers, and unfairly so, as Beinn Leoid and his two lower brothers offer a wonderful day out. They might lack the steepness of Ben Stack or the rocky features of Arkle, but on a good day, if you choose them, they will pay you back with great vistas and the quiet solitude one can only experience in true wilderness.
..............
Having returned home, we celebrated our 50 Grahams with a glass of wine, but then I remembered, Kevin was on 199 Munros at the time, so the next morning saw us trudging up steep slopes of the Mamores, to reach my husband's double ton! TR to follow soon

This is becoming a habit of yours BP, posting a trip report in an area of a WH meet just before the meet date

I too thought that this circuit was a grand day out.
The hills behind the loch Loch Cul a'Mhill are Arkle and Foinavon.
Not much on Meall an Fheur Loch? Glad to have passed the half ton mark on Grahams, even if No. 50 wasn't very spectacular (Meall an Fheur Loch is probably one of the least visited Grahams and hardly mentioned anywhere).

Rod, I'm all happy to help with route info

We don't have much left to do here so unless we decide to repeat something, the targets for the meet would be:
1. Foinaven
2. Carn an Tionail and Beinn Direach
3. Beinn an Eoin if it's dry enough (wet approach to this one)
4. Sabhal Beag

We read your TR and actually, used your route

I wondered, sitting on the summit of Leoid, if the western approach was possible. Some wild terrain to cover, I guess, but I'm sure it won't be a problem for you