Am Foachagach Again! (Anyone seen my sunglasses?)

Am Foachagach Again! (Anyone seen my sunglasses?)


There were several objectives in making this expedition to the same hill for the third time this year:
To repeat a route similar to my New Years Day trip, but in summer conditions.
To have a wild camp - my first night of camping since last July.
To try out my new THERM-A-REST - NeoAir Xtherm (small) sleeping mat.
To see if I could find the sunglasses that I lost on New Year's Day - a long shot, I know!
Develop a bit of mountain fitness after my weekends marking for the IB.
Be home by 1300 the next day as Yuliya had a driving lesson booked.
​Following the mice damage to my Gregory Z55 rucksack, which is being repaired by a kind colleague, I used my 1989 Berghaus Cyclops II. Other than the elastic in the hood going many years ago and a greasy stain that I cannot completely remove, the pack remains a solid piece of kit and a reasonably comfortable carry. The 65 litre capacity makes packing that bit easier. On the way up Gleann Mohr, I passes this fine little bothy. I had cycled past it without noticing it during my last visit to the glen. The bridge near to Deanich lodge was my first place to look for my sunglasses as this was where I had left my bike on January 1. I took a good look at Deanich Lodge, which has oil-fired central heating and electricity, presumably from a generator in one of the outhouses. It is certainly a few notches up from your average bothy! I continued on my bike across the small bridge before leaving it close to a small cairn. I am not sure of the significance of this cairn; perhaps the resting place of a faithful hound. My previous ascent of Meall a'Chaorainn had followed steep slopes to the SE of the summit. This time, I took the unwise decision to make my way up the shallow gully seen in the photograph of Meall a'Chaorainn above. This started off as dry rocks but led to wet slabby rock forcing me to pull myself up well rooted heather to the right. It did however provide me with a better angle to photograph Deanich Lodge and the top end of Gleann Mohr. An easier walk led to my next checkpoint in my search for my sunglasses, but I found nothing.

It leaves me wondering how often this Graham is visited. There must be a significan number of people doing Grahams or the SMC would not have published a guide, but this is quite a remote one for those that climb Grahams as easier options on wetter days. I continued along the same route as before, at least more or less as there is no path. I checked the peat hags where I had stopped for coffee. I was unsure as to where I would camp but by 22:30 I was feeling a little tired and Lochan Dubh seemed like a nice spot. It was not a very smooth spot, pitched on a mixture of grass, moss and heather but relatively dry. Using the pump sack for the Therm-a-rest took quite some time but I was trying to avoid blowing it up by mouth with the resulting condensation within the mat. I was using the sack provided with the mat. It is possible to buy a much larger pump sack for around £15-20, which should make the process a lot quicker. Eventually, the mat was inflated providing the firmness that I prefer - I carry it for insulation more than cushioning.

I arose at 0530 and did a circuit around the loch to take some photographs of my campsite. Am Foachagach to the left and Carn Ban to the right.

On my way round, I startled a dotterel (Eudromias morinellus) from its nest. I gather they are in decline in Scotland (conservation level red), possibly due to climate change affecting their food supply of invertebrates: http://www.rspb.org.uk/community/ourwork/b/scotland/archive/2013/07/09/dotterel-declines-in-scotland-out-of-sight-out-of-mind.aspx I broke camp quite quickly and set off for my first target - Creag Lachach. When I was here New Year's Day, I thought I could see a walker moving. However, "the walker" never actually moved on, leading me to believe that it was just a cairn. With "the walker" still there almost 6 months later, I thought I should check him/her out!

Above: "The Walker" with left to right: Meall a'Chaorainn (Graham), Beinn Tharsuinn (Graham), the distant Carn Chuinneag (Corbett) and the massive Beinn a Chaisteil.
​Below: With my imaginary walking companion on Creag Lachach. 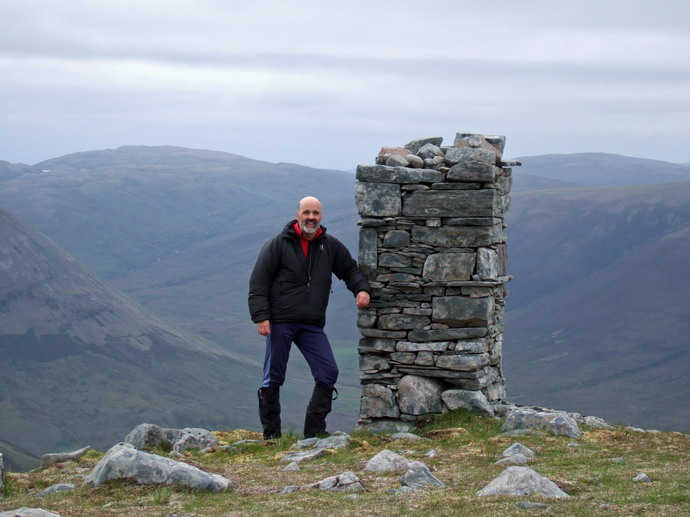 Although I was at 705m, I had Carn Gorm-Loch between myself and Am Foachagach - Over 3km and 400m of ascent. The views to the west were beginning to open up as I gained height: L to R Eididh nan Clach Geala; Stac Pollaidh (distinctive peak in the distance) and Seana Bhraigh.

I had headed off from camp with only eating a cereal bar and a few nuts as I was aware that I needed to be home by 1300. This was beginning to tell as I pushed onward with my energy levels low. I did not linger long on the summit - just long enough for a few selfies and to have another look round for my sunglasses. No luck again! It was easy going down to Meallan Ban and although I was beginning to sense that I was well behind schedule, I still stopped for photographs. The skies were clearing and visibility improving. I would have liked to have lingered, possibly cooking some noodles and having a brew, but I continued. It is strange when you know that you are safe and have plenty of daylight but still feel anxious about the time. I was beginning to feel annoyed about Yuliya booking a driving lesson in the middle of the day as it totally messes up the day - not much time to do anything either before or after.

Above: Cul Mor and Suilven in the distance with Seana Bhraigh and Creag an Duine to the right. Notice the extensive thrift adding a splash of pink!

It was clearing and I took several photographs on the way down. Above and the next photograph: Cona Mheal and Meall nan Ceapraichean

On reaching Glenbeg bothy, I was resigned to the fact that I was not going to be home for when I had promised and accepted that I would have to spend a period of time in the doghouse.

When last here the door had been secured with copper wire which someone had cut through. This time, all the indications were that this is still an open bothy. Though it is no longer maintained by the Mountain Bothies Association, the MBA signs are still up. I think that in the hands of the MBA it would be better maintained and a little cleaner inside. That said, it still offers good shelter and is well positioned for Carn Ban or a multi-day trip linking the bothies in the area. I was aware of having carried a gas stove and fuel all this way without using it and realising that there was zero chance of returning home for 1300, I took a bit of a break. After Thai Green Chili noodles and coffee I headed towards Deanich Lodge, as the skies opened up and Gleann Beag was bathed in sunshine. [
I was glad to reach my bike as it meant a slight change in the muscles being used and a net downhill would help to maintain my momentum. I stopped off at the bothy in Gleann Mohr to take some more photographs before the last few kilometres back to the car. Professionally, I am expected to have periods of self-reflection. To extend this to my time in the hills....

I must do better next time!

Thankfully my wife was able to rearrange her driving lesson for 0800 Sunday morning.

I am trying hard to accrue enough brownie points for my next trip!