A long drive up to the walker-friendly Attadale Estate, where I parked up in the late afternoon for the walk in to Beinndronaig bothy. I had been looking forward to this walk, but must admit it has been ruined by the estate's decision to "upgrade" the track. My understanding is that this will go all of the way to Loch Calavie. As a result, for the first half of the walk in I had the company of JCB's, diggers and rolling machinery. All in all, it was a huge disappointment. On the plus side, the guys at work were great at stopping their vehicles to let me past. Even so, it was only when I got in sight of the hills and bothy that I was able to walk on the original track - however, this is disappearing on a daily basis. The walk in was a little quicker than anticipated and I arrived at the bothy in the early evening after 2 1/2 hours walking. The bothy consists of four rooms (all with fireplaces) and one that has Christmas decorations hanging up! In addition to this, there is the famous flushing toilet - the only bothy I've visited that has such a convenience! The estate have also left a quantity of chopped wood outside, although it was too mild on this trip to necessitate a fire. Not long after I arrived, I was joined by a D of E supervisor, although he only stayed for a quick chat and a use of the toilet! After eating, I was able to sit at the window watching a herd of deer graze close by.

My hopes for a good sleep were dashed by some clown appearing at midnight, waking me as he shouted "hello" as he came through the door. I was just dropping off again, when he came to ask if there was a candle anywhere - I assume that he didn't find it as he was back 5 minuted later asking if he could borrow my headtorch. He spent the next hour clumping about doing I know not what! He got up at 3am and spent another hour stomping about before leaving at first light - the joys of communal living.............

After this, I found it hard to get back to sleep, so was up about 5.45 to get set up for the day. I followed the track up Coire na Sorna to Loch Calavie. It was a driech, damp morning and judging by the speed of the clouds, it didn't look as though yesterday's high winds had dropped much. Walking up the coire

My initial plan was to climb Lurg Mhor first, but the overnight rain had raised the stream levels somewhat, so I ended up on a more direct line to Bidean, passing a herd of deer, with some young. 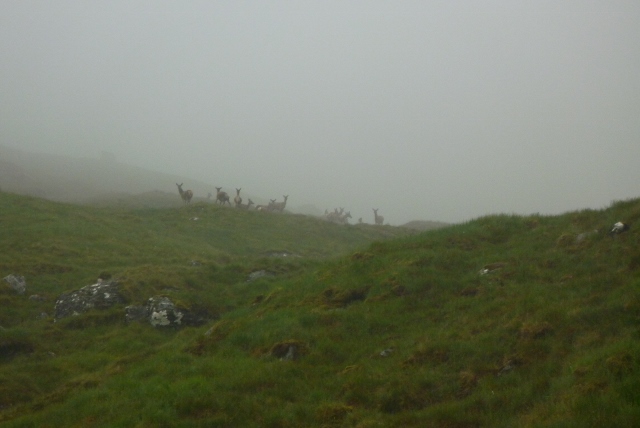 Deer in the mist

On the plus side, the cloud was lifting and I was soon able to see Loch Calavie again. 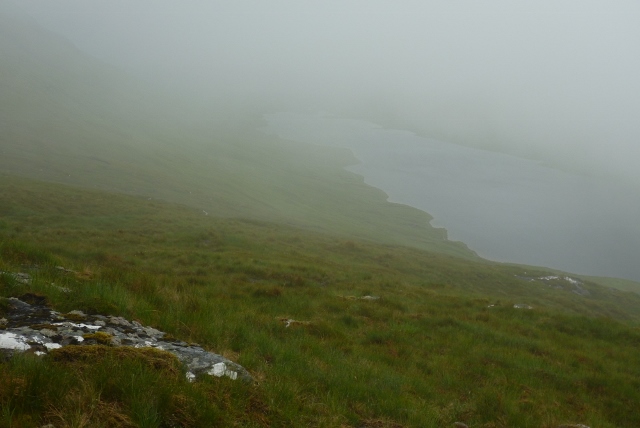 My route took me past the lochan just below the summit of Bidean. Bidean from the lochan

From there, I headed round to the ridge and picked up the path to the cairn. Again I was in luck, as the view emerged just as I got there, although it was still quite gloomy. The wind from earlier in the morning had dropped, so although it felt quite chilly, I could take my time descending to the Lurg Mhor col. Lurg Mhor from the col

A straightforward walk from the col up to the summit, with a path to follow for most of the way. From the summit of Lurg Mhor looking east along the ridge I then retraced my steps to the col and from there, dropped down the wet grassy slope to Loch Calavie. As it was only 11.30, I had no excuse not to add Beinn Dronaig to the day, so I headed back along the track a bit before heading up from the high point.

Beinn Dronaig is quite a complex little hill and I found it harder going than the Munros. I climbed up some steep ground before heading south west to gain the easier slope leading to the trig point. Bidean from near the summit of Beinn Dronaig At the trig point!

Again, quite heavy going as I dropped down to the bothy, but at least it's not too far away. I was back at the bothy before two. My original plan was to spend two nights there, but I had plenty of time to walk out, then drive down to Ratagan YH. I had a brew and sorted by bag out for the walk out.

Once again, I had to negotiate the surreal industrial landscape in the middle of nowhere, but I was back at the car before five. Having climbed the hills just to the north a few years ago, I had been really looking forward to this walk, but it didn't quite match these expectations. I think a combination of the mess that is being made of the track and sleep deprivation may have had something to do with it. The estate are to be commended for proving the bothy, but a shame that it looks like this is another tarnished wilderness...........

Quite a few JCBs and things in 'remote' areas recently. It's a pity you feel that spoiled your walk. I hope you found the hills themselves enjoyable, Colin.