To Stoer and beyond

To Stoer and beyond

Route description: The Old Man of Stoer and the point


With cloud level well below the mountain tops, we swapped walking in the mist for walking along the spectacular Scottish cliffs. This time - Point of Stoer.

We have been here before, visited the Old Man, but we were always unlucky with weather and never managed any good photos of the sea stacks and cliffs. I've been waiting for a decent day on the western coast for ages and now it arrived

WH route suggests walking along the coast to the very tip pf the peninsula, and returning over Sidhean Mor. We opted for a different variation of this walk, longer but allowing us to explore the cliffs all the way to Culkein. This version is described in detail in "100 Classic coastal walks in Scotland" by Andrew Dempster, a great guide book for all seaside enthusiasts.
On the way north we witnessed the impressing spectacle of cloud "cuddling" mountain tops, here, the clag "rolls over" the slopes of Conival &Ben More Assynt:

The final minutes of the journey on B869 made us gasp more than once... Even Lucy was bewildered!

When we arrived, the car park by the lighthouse was almost full, we just about managed to squeeze in

We planned to walk along the cliffs to the Old Man and beyond, continue all the way to Culkein and then return over Sidhean Beg, the little hill with the radio mast on top. This is about 13 km circular walk with splendid views on a good day. The final section is boggy and involves crossing a few peat hags, but due to dry summer so far, we had no problems here.
Our route:

Track_OLD MAN OF STOER 12-06-16.gpx Open full screen  NB: Walkhighlands is not responsible for the accuracy of gpx files in users posts
Of course, hoards of tourists were all heading for the path to the Old Man, but once we passed the sea stack, we hardly met a soul. Ha! This is by far the best way to explore this area, but I guess most tourists don't realize, there's more to the Point of Stoer than just the famous old fart

The cliffs by the car park. During one of our previous visits, I spotted a seal here, but no luck this time:

The cloud wasn't as low as we expected on the western coast and I kept fingers crossed, it would brighten later on. This is a good place for panoramic pictures!

Speaking of panoramas, here is the first one, looking south from the path to the Old Man, with the Stoer Head lighthouse to the right:

Looking north, we couldn't see the sea stack yet, but I knew he was there... The lighthouse, the cliffs, the sea... everything comes together. The edge of the land.

While I concentrated on the panoramic shots (not as easy to take as one would think so - most of them came out a bit tilted), Kevin snapped zoomed photos of seabirds. They were everywhere! So many different species: from common gulls and fulmars, to guillemots and cormorants, we even met a great skua! And at some point we were dive-bombed by a pair of very angry oystercatchers. Obviously we passed very close to their nest and they were just protecting their offspring.
I posted some of the bird photos in a separate thread in Wildlife section:
http://www.walkhighlands.co.uk/Forum/viewtopic.php?f=3&t=64162
It didn't take us long, even with all the breaks for photos, to reach the next section of the cliffs, where we caught the first glimpse of the famous Old Man: 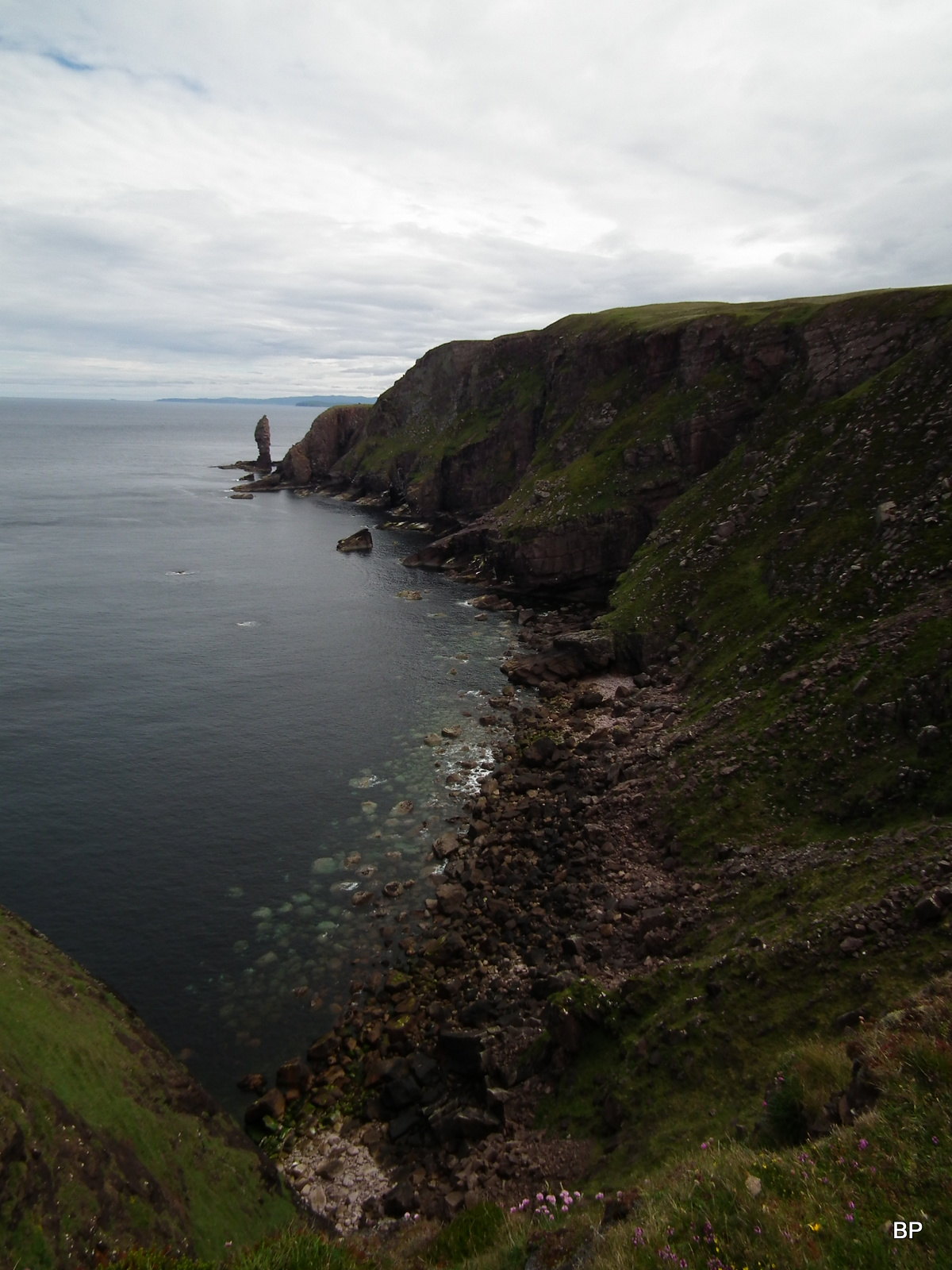 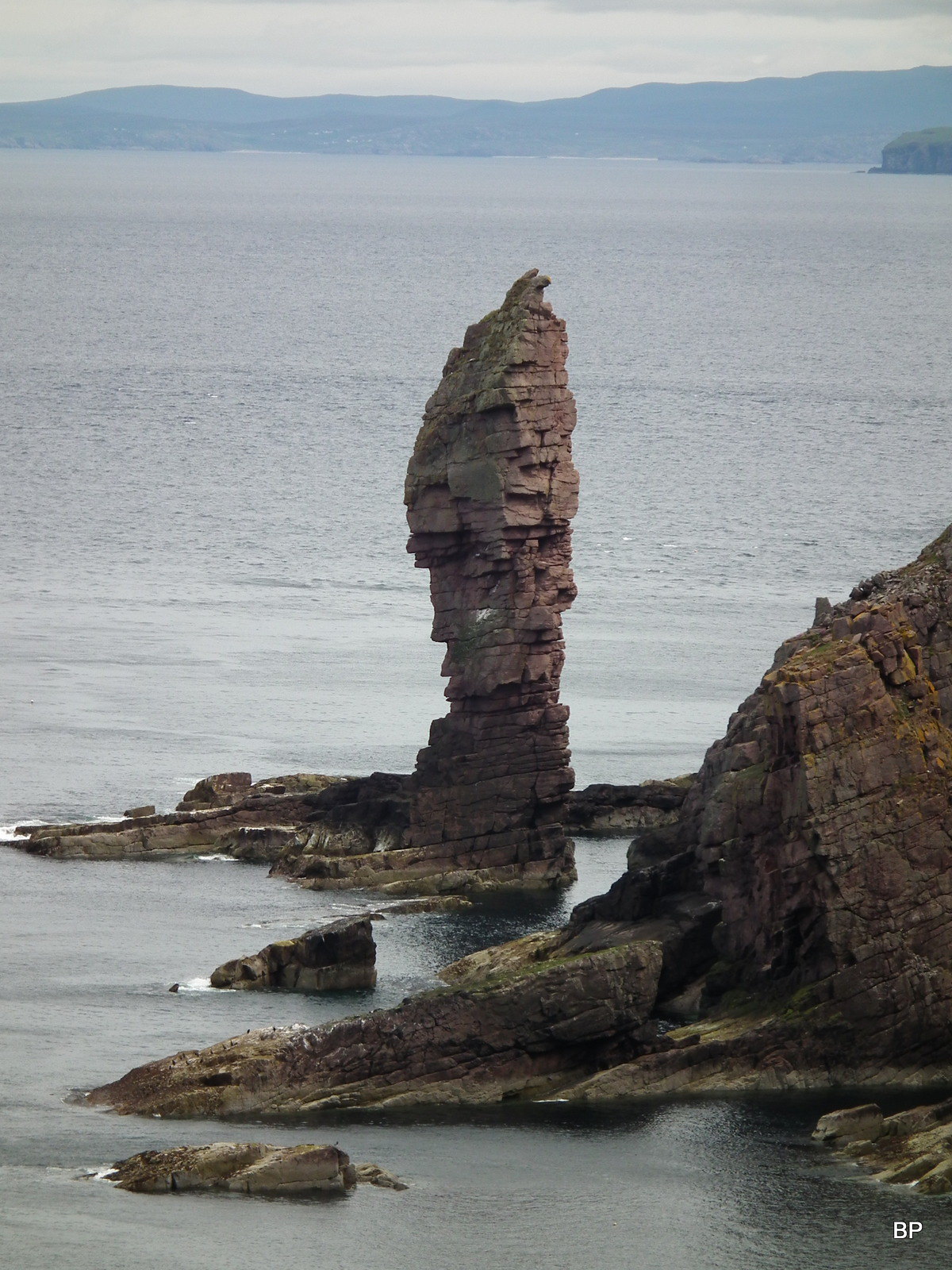 2016-06-12 old man of stoer 084 by Ewa Dalziel, on Flickr
The day was quiet and so was the sea. The previous time we were hire, it was blowing so bad, we could hardly stand up. Taking photos in such conditions proved impossible! Now, we could indulge in snapping the landscape up to our hearts content. Basically, every corner you turn, there is another view, a different perspective on the cliffs and the stacks. Even the Old Man changes shape as you get near...
One Old Guy and one young...

Just before reaching the Old Man, there is another sea stack, maybe not as unusual in shape, but interesting nevertheless: With Kevin and the cliffs just to show the perspective: Many people lazed about on the edge of the cliffs just above the Old Man, but we still managed to find a good rock to sit and stretch our legs. it would be a sin just to walk past this magical spot, without enjoying the views to the full.
The Old Fart from different sides: 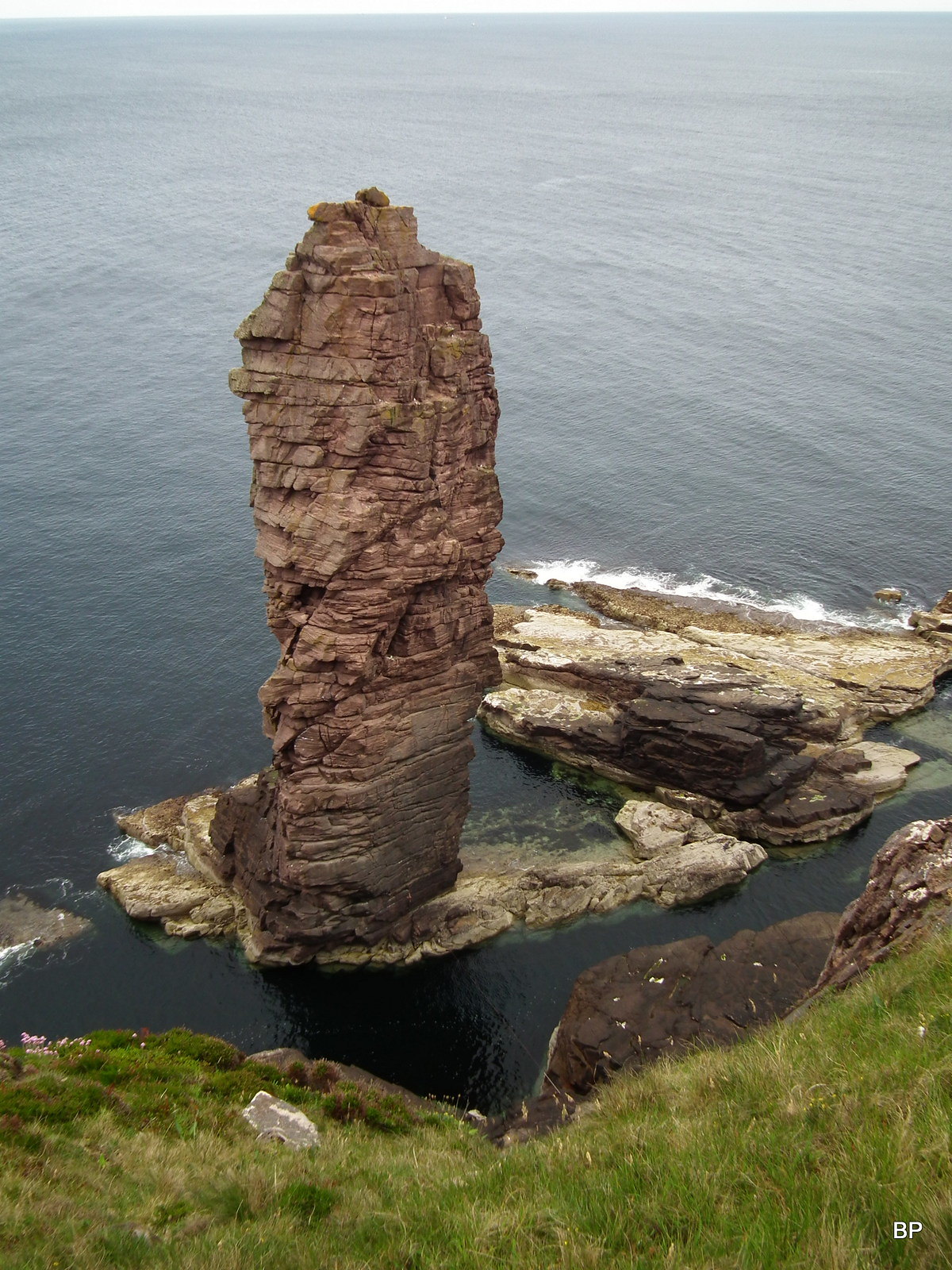 Sometimes, when Kevin walks too close to the edge, I get excited and shout at him to step back. This horrible man might on e day give me a heart attack!!! After a lengthy break, we continued our walk, leaving the tourist traffic behind

The path is a bit less obvious from now on, but it does exist most of the time. Mostly, it's just follow the edge of the cliffs business.
The next little "bay" after the Old Man was a guillemot haven. Most birds sat on the tiny rocky islands in the middle of the photo: 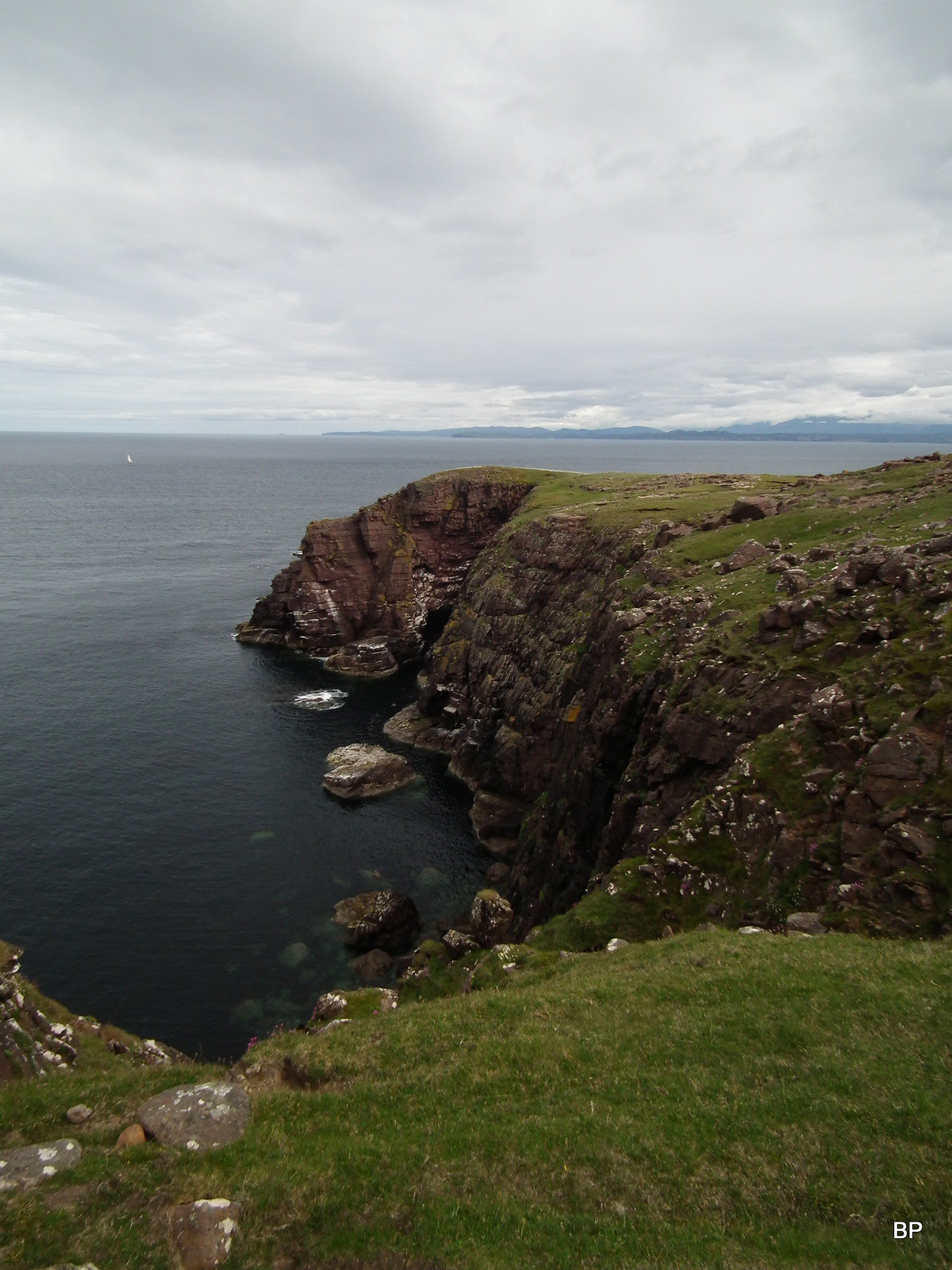 Some birds were in the water, swimming, diving... I read somewhere once, that a guillemot can dive down to 180m! Lucy can't dive and just as well, but she stole the camera when I wasn't watching, and snapped a selfie This wee birdie followed us for a while, watching with interest, obviously protecting its territory. I think it's a wheatear (young male), but fell free to correct me if I'm wrong. The very tip of the peninsula is fenced off with a low fence, but we still got far enough to find a good vantage point for the next photo session. Looking back at the Old Man:

View north and towards the mainland, with Quinag clear of cloud:

We also spotted the first ked this year, and a few very noisy horseflies. Insect invasion is coming, I think The cliffs on the eastern side of the Stoer peninsula are higher and even more impressive than those around the Old Man. I was amazed. A quick look at the map told me, these cliffs are "only" 90m high but for me, the sheer drop was scary enough! Kevin climbed to the highest spot and posed with the big drop below him:

I was also surprised by the color of water here. In the shallows, it was bottle-green: 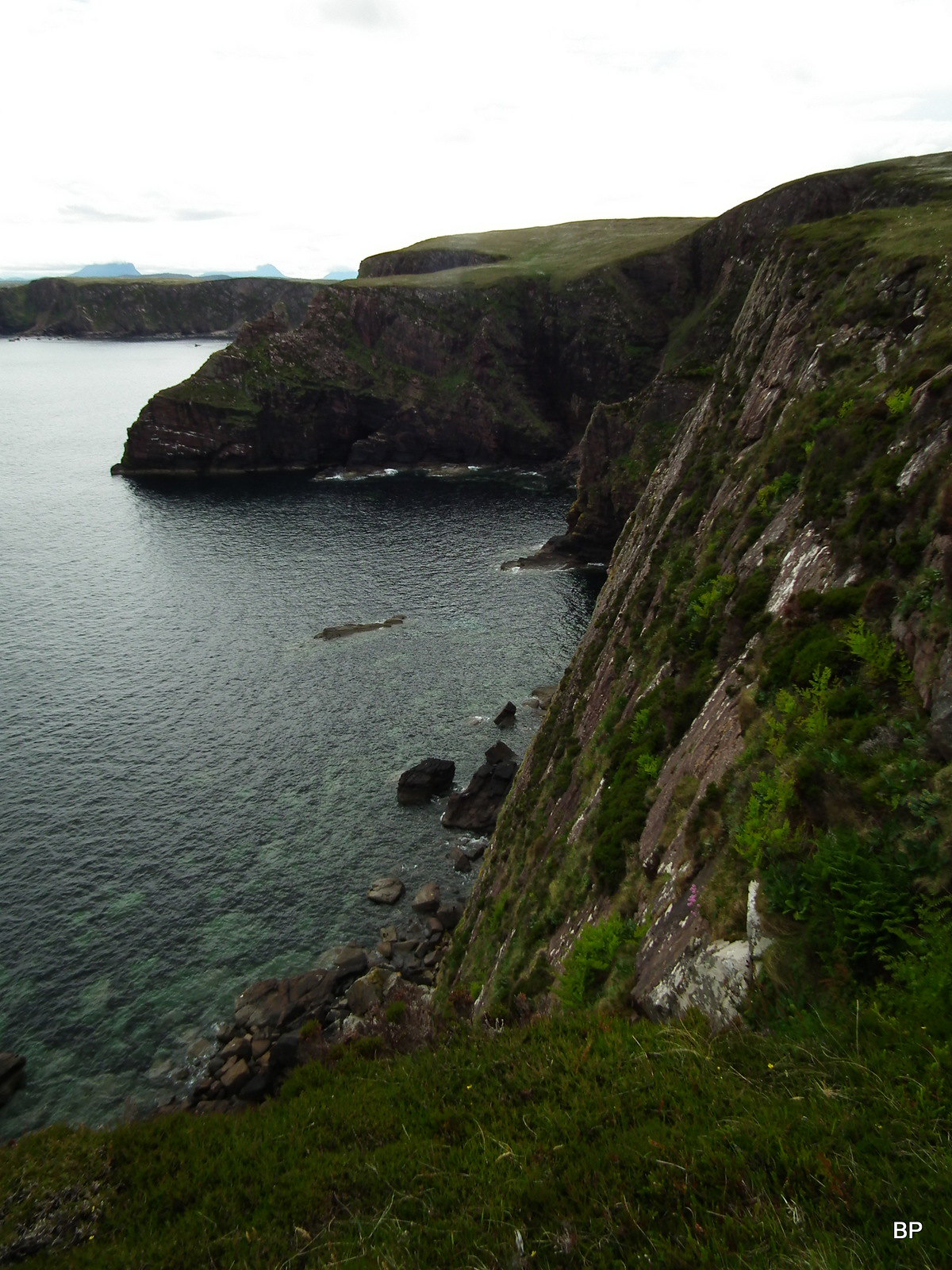 2016-06-12 old man of stoer 274 by Ewa Dalziel, on Flickr
This pano came out a bit distorted, but look at the rhino-shaped rock in the middle of the picture: The cloud was slowly lifting from the hills of Assynt...

The final stage before reaching the meadows of Culkein. The path is harder to follow now and in wet weather this would be quite a boggy experience:

View back to the Point of Stoer, more green, tropical style water in the foreground:

More cliffs... Note the stack-like rock in the middle of the photo: 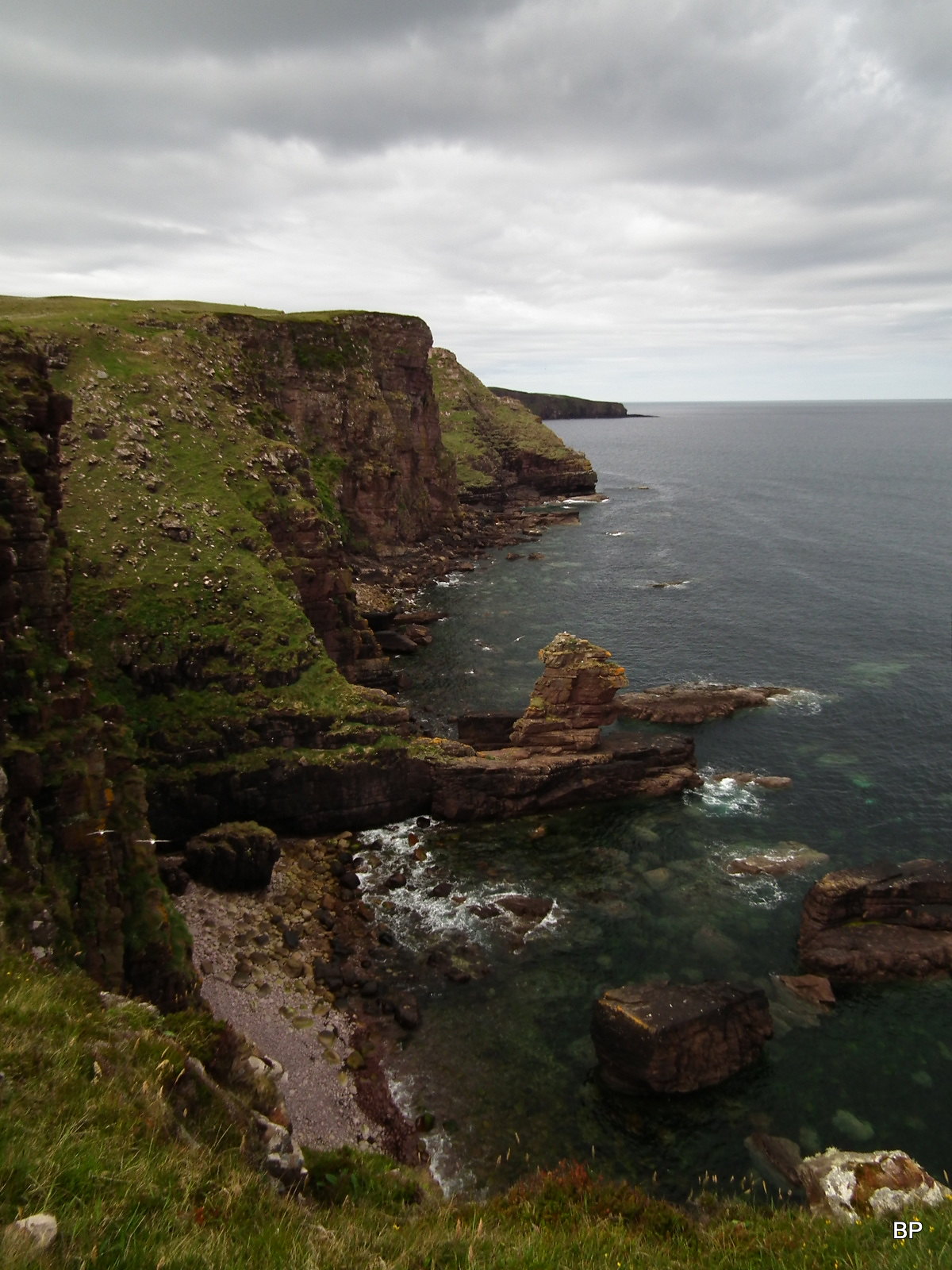 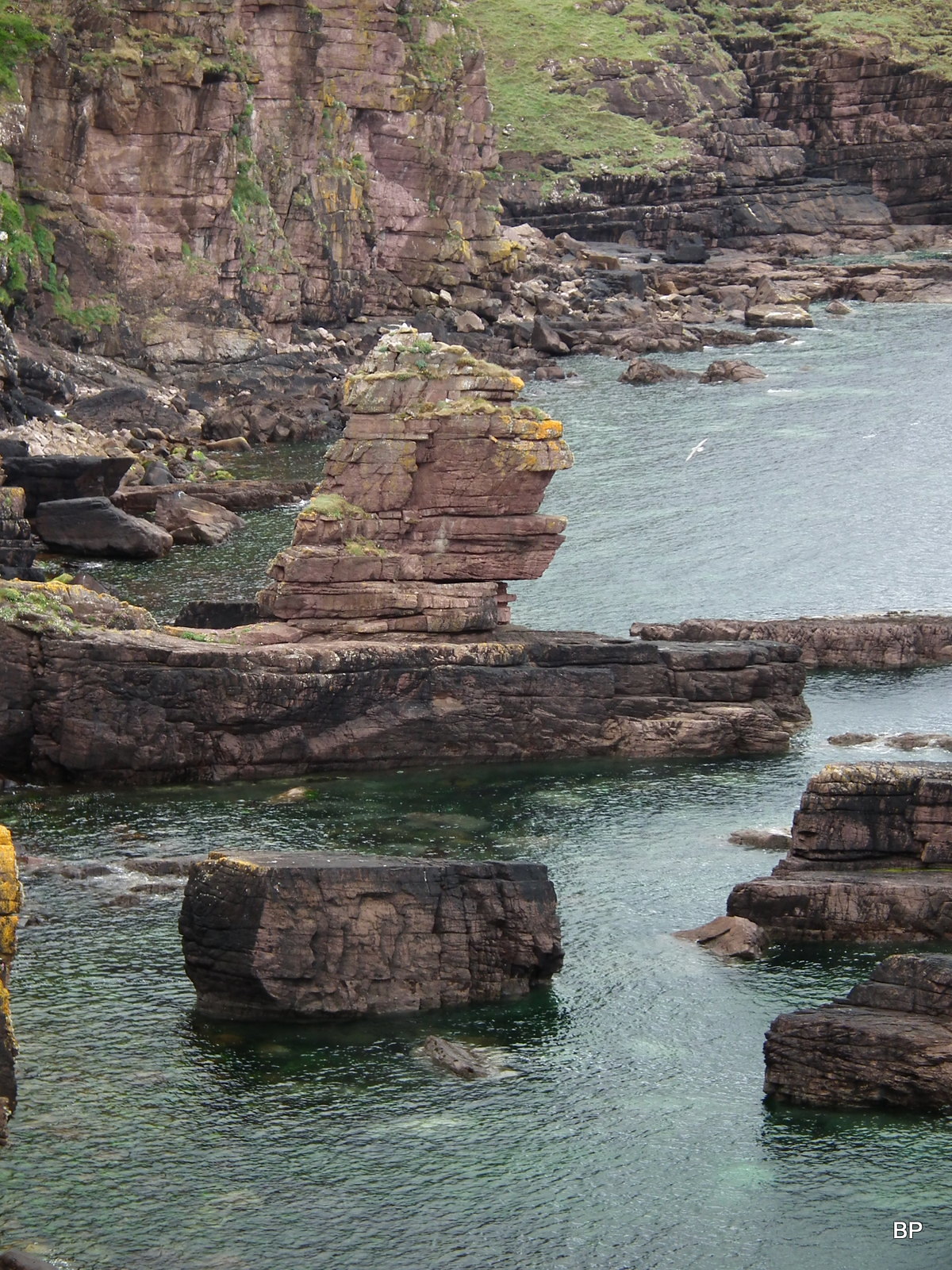 2016-06-12 old man of stoer 624 by Ewa Dalziel, on Flickr
We descended almost to sea level now, it was in this spot, we were attacked by the agitated oystercatchers: Just before reaching Culkein, we came across this huge bird, sitting on a top of a grassy bump. Great skua, of course, I recognized it immediately. I also noticed that the bird was ringed - a blue ring with "07" on it as far as I could see. Quick research and I found out, that all chicks born on Handa Island are ringed as a part of a large research project to study skua migration. This individual might have come from the Handa colony: Before leaving the coastline, we crossed the final meadow on the way to Culkein:

Here, a well worn path follows the coastline along an old stone dyke and past a ruined shed to the end of public road: We turned right up tarmac road, soon leaving the village behind to follow a dirt track towards Loch Cul Fraoich. We aimed for the radio mas on top of the wee hill in front of us: Once past the loch, the track almost disappears, so we left it and climbed straight up to the mast. Thank heavens it was dry, otherwise we would be sinking in bog up to our knees

Loch Cul Fraioch from above:

Suilven still wearing a white hat, but the cloud was burning off now: We jumped over a few peat hags and soon reached the mast. From here, a good track descends to the car park. The sun was out now and we enjoyed superb views around, to the sea of tranquility...

...and the weird shapes of the Assynt hills:

2016-06-12 old man of stoer 478 by Ewa Dalziel, on Flickr
The circular walk took 5 hours, but even though it could be done in three, I'd recommend walking at a very slow pace. You never know what you may see around the corner

Re: To Stoer and beyond

This brought back memories of not-so-long-a-go, actually. We first visited the area almost three years ago as we rented a cottage in Clachtoll for our holiday that year. The walk to the Point of Stoer from Stoer lighthouse was our first walk and since then we have been back twice. Not bad when you consider that it is a journey of at least 7 hours to get there! The last time we went there last August it preceded leaving my wife to be a volunteer 'helper' on Handa Island for a week. That is a truly marvellous place. If you are at all interested in birdlife - and your photograph of an Great Skua suggested you might well be - it is well worth going to!

I hope that you had a cup of coffee/tea etc., by the way, from the caravan 'Living the Dream'. I pride myself from being the 500th visitor to her webpage!