Grabbing the sunshine in Glen Feshie

Grabbing the sunshine in Glen Feshie

Sunday weather was to get off to a good start in the east before turning wet in the afternoon - seemed like a good chance to get a walk in. Although I didn't leave the house as early as intended, I was walking from the Glen Feshie car park near Auchlean at 10am. Usual story in this area - I had vague plans on the western plateau, but didn't stick to them, deciding to walk down the glen first rather than get up high.


Mullach Clach a Bhlair.gpx Open full screen  NB: Walkhighlands is not responsible for the accuracy of gpx files in users posts
Last time I walked down this side of the Feshie in this area was about 12 years ago. I think the path has improved overall since then, but more recent storms have removed sections of it.

Erosion on the banks of the Feshie: 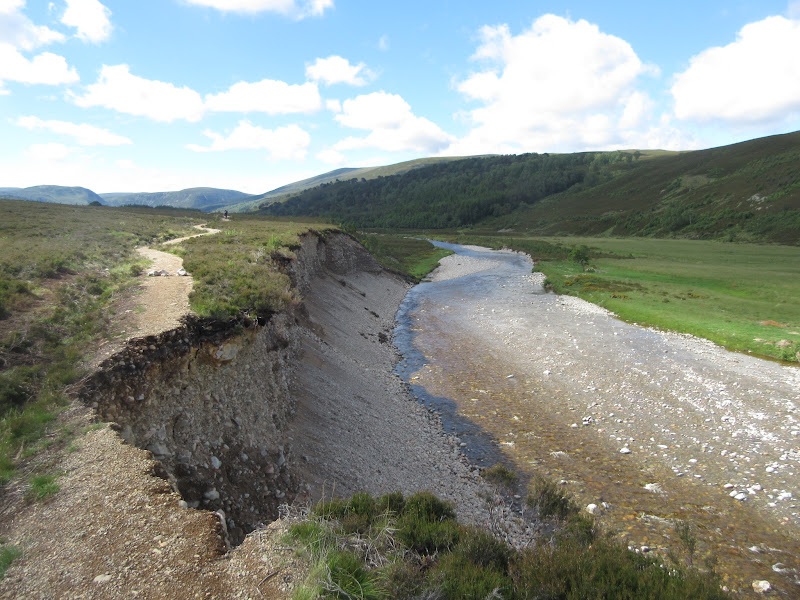 …including on the Allt Garbhlach: 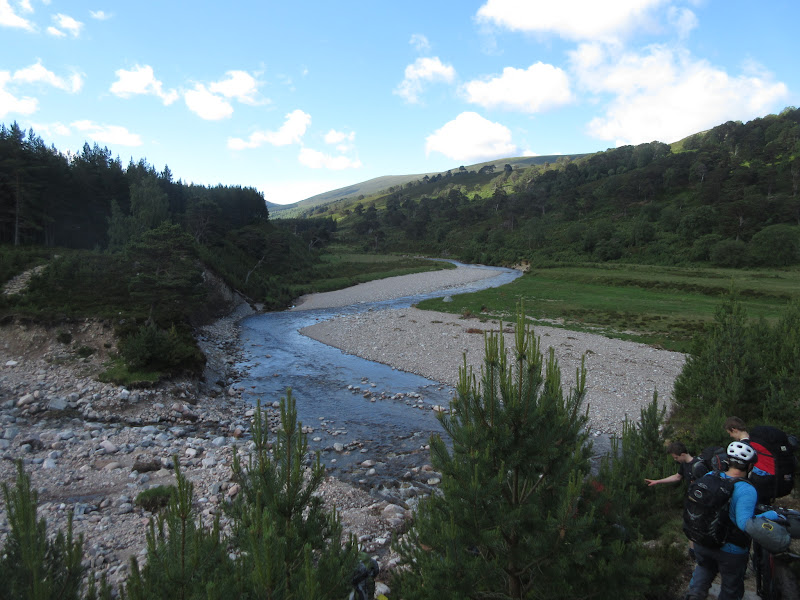 I passed a large group of teenagers and found myself leapfrogging with a pair of mountain bikers - they kept getting held up by the awkward traverses where the path had mostly disappeared into the river. 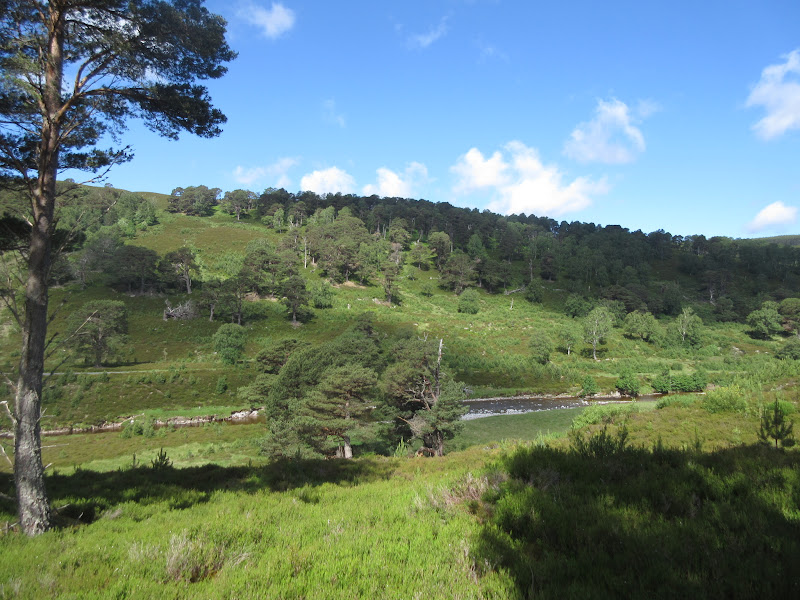 I was at the bothy about an hour after leaving the car. There is allegedly a stalkers path up behind the bothy onto Druim nan Bo, but I couldn't see it on casual inspection. I was going to use it, but by this point I'd already decided to walk further down the glen anyway, so it didn't matter. 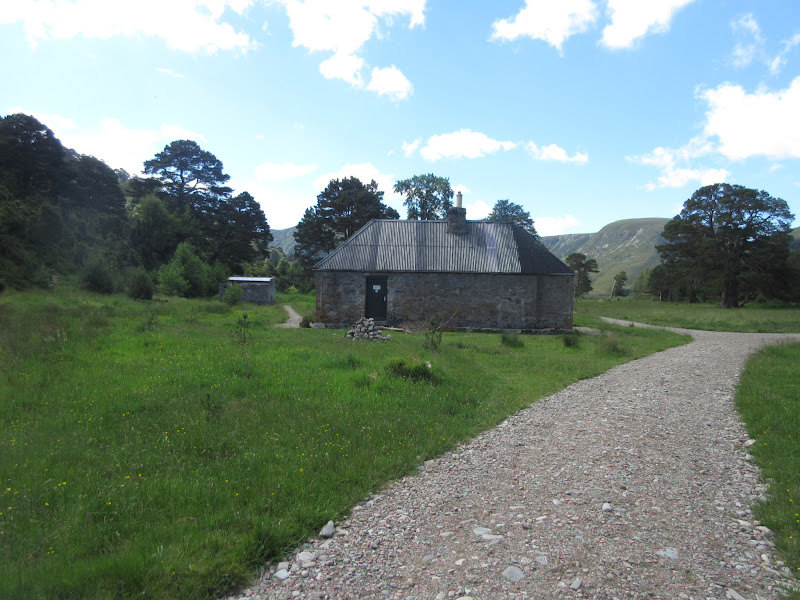 The next bit of the glen is the best - I couldn't walk this far on such a lovely morning without carrying on up it. Last time I was down here, I waded the river a couple of times and it almost came up to my waist. Today was by no means dry, bit a similar crossing would have been a lot easier. However I didn't need to this time.

The Slochds (Beag and Mor): 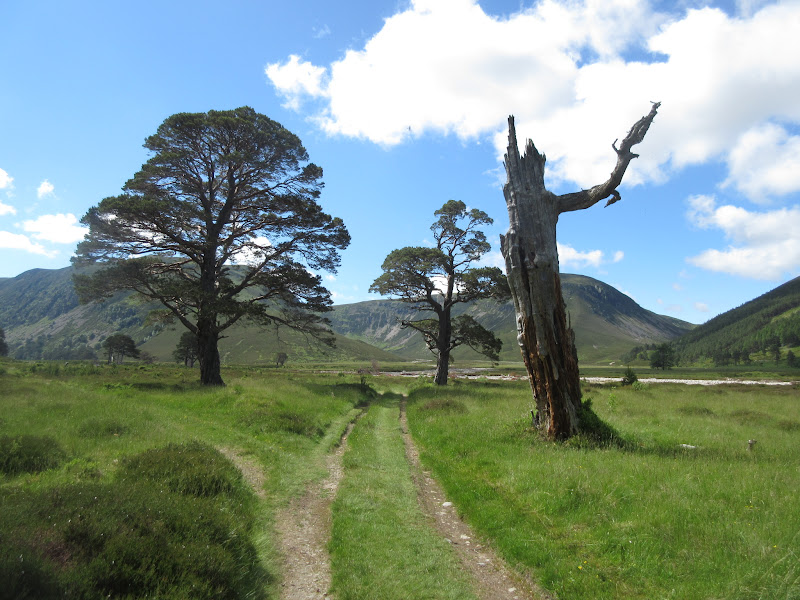 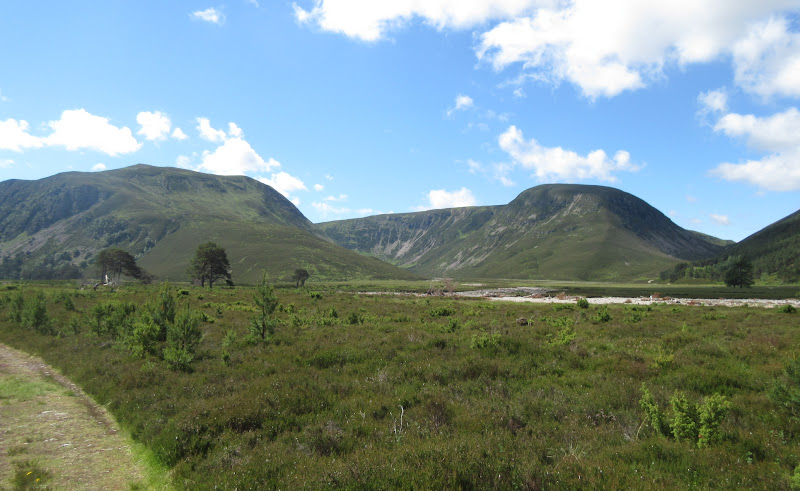 Creag na Caillich and the entrance to the most scenic bit of Glen Feshie: 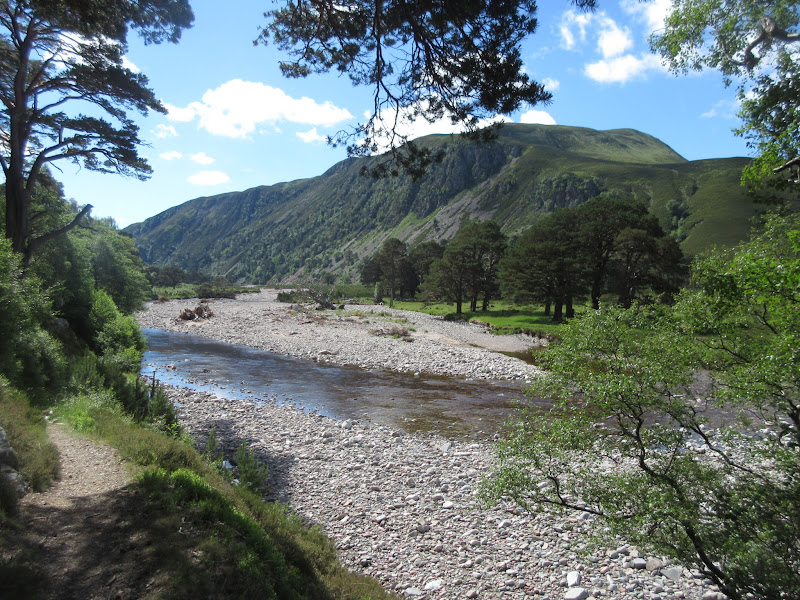 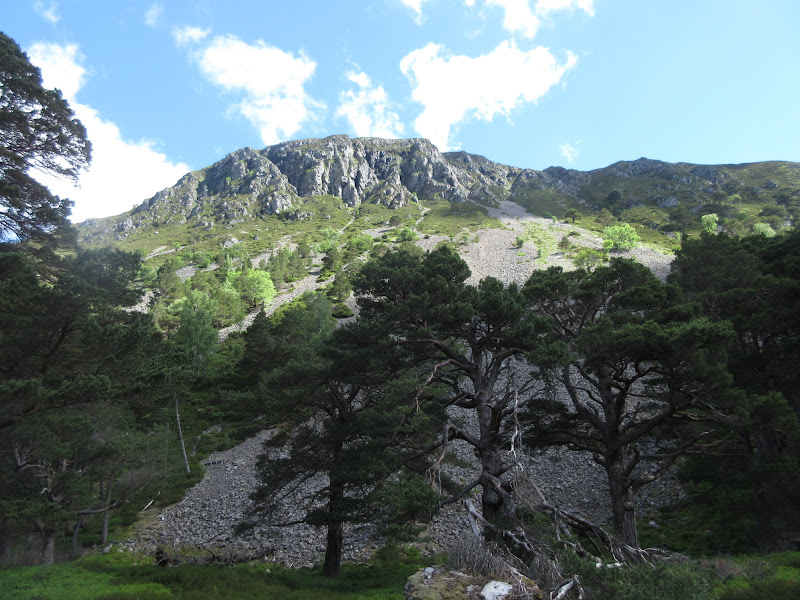 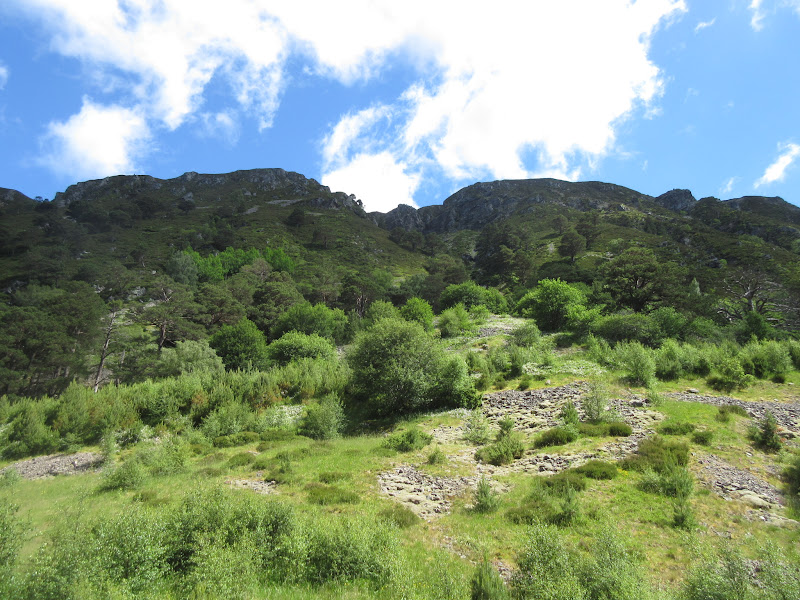 I had been following the bank of the river rather than the official footpath and I soon reached a point where the crags dropped sheerly into the river. Normally I think you would need to traverse a little higher up across scree, but today the water was low enough for me to scramble alongside some deep pools right down by the water's edge.

I was keen to go further up the glen, but once I spotted a faint path climbing in a gentle contour up the eastern slope of the glen, I decided to use it.

Down in the glen: 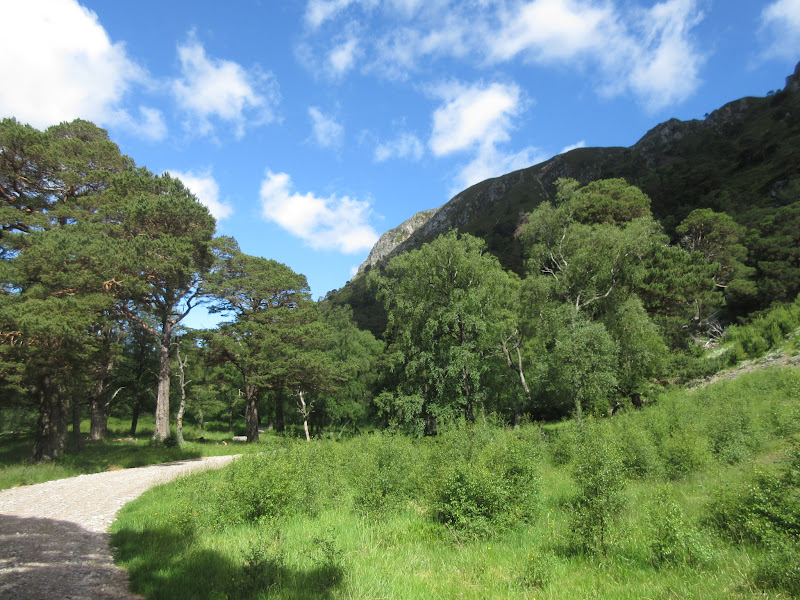 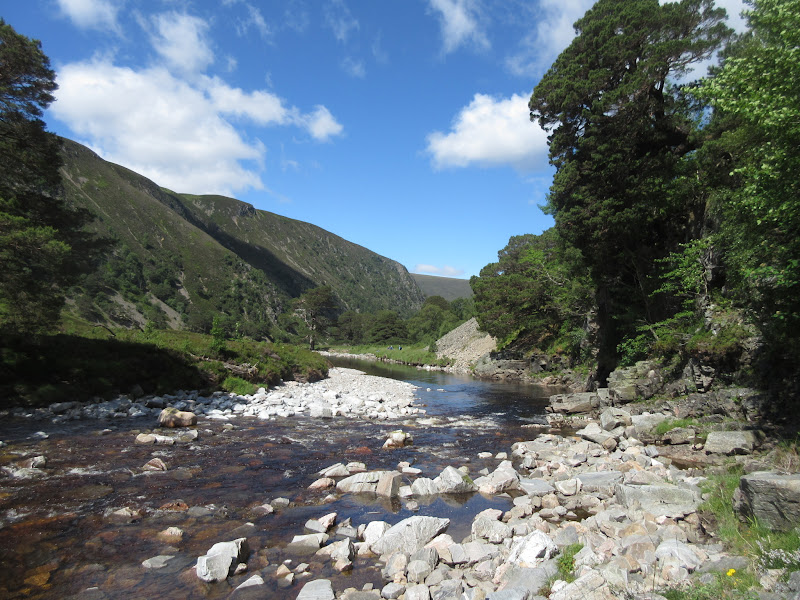 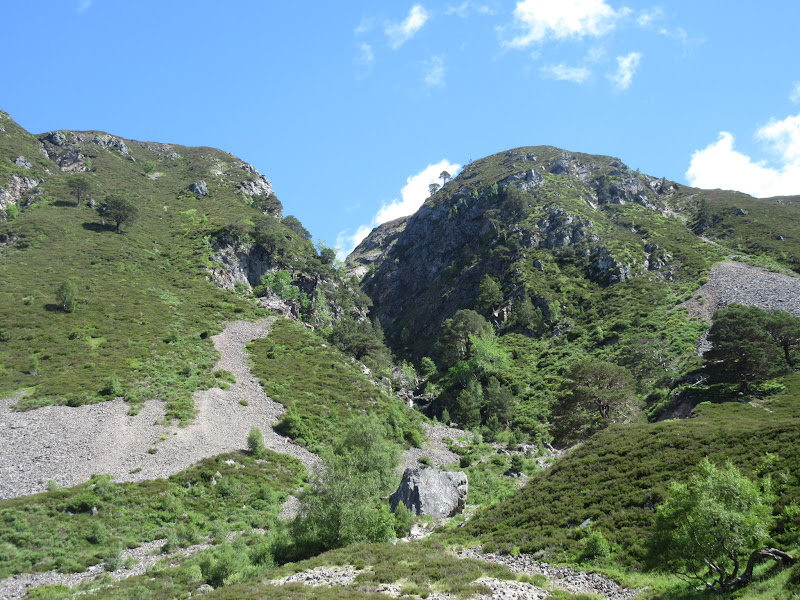 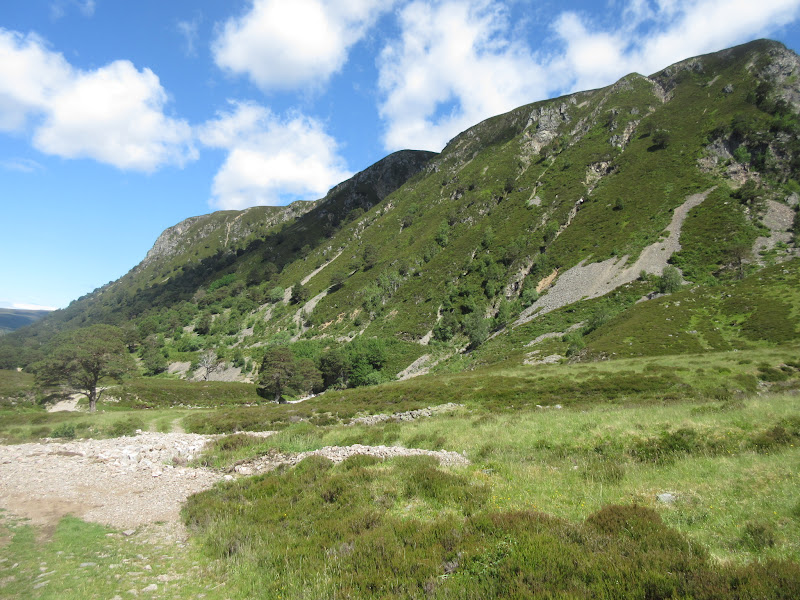 There were good views through the narrows of the Feshie from this path, although it was a little overgrown with heather. It soon petered out, leaving me on a rather spongy plateau with a few peat hags to negotiate. 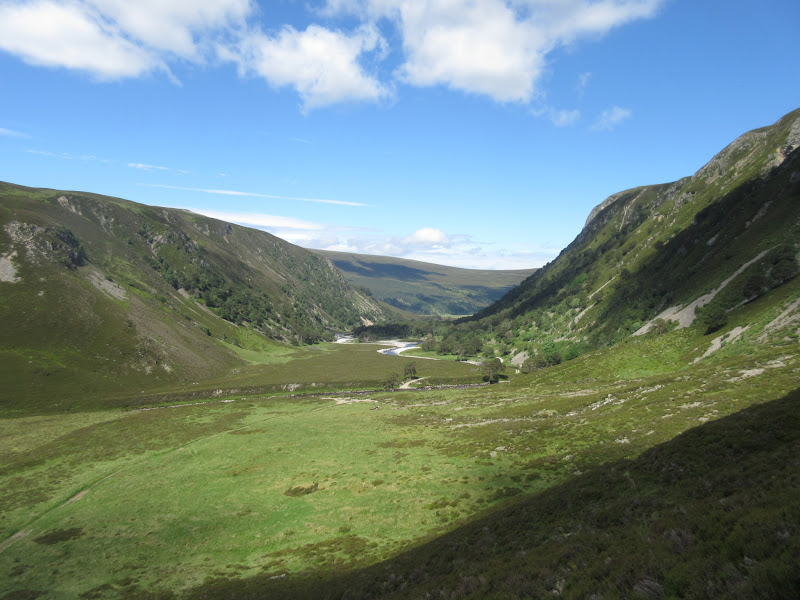 …and looking back down the glen: 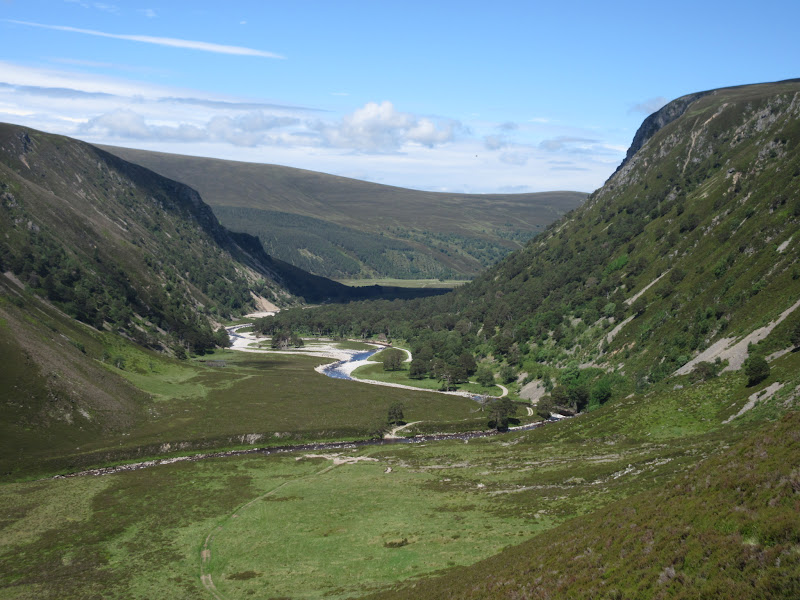 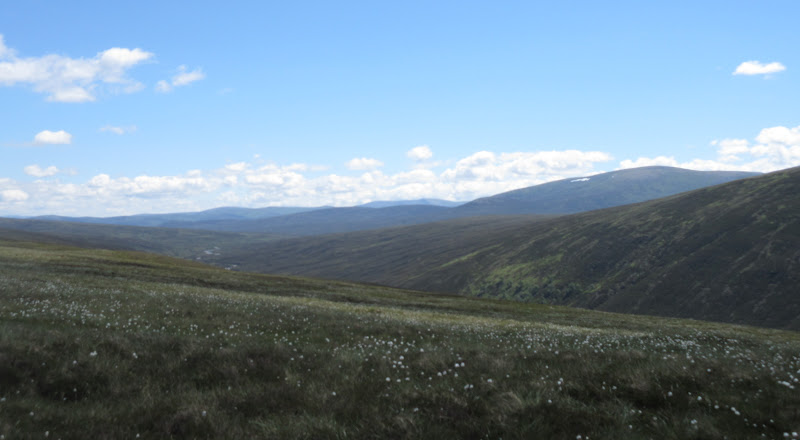 Before I made the final pull up the slopes of Druim nan Bo, I was able to wander out to the top of one of the ravines on the eastern wall of the Feshie. Then it was up through thick heather to gain the high plateau.

At the top of Creag a’ Chreagain: 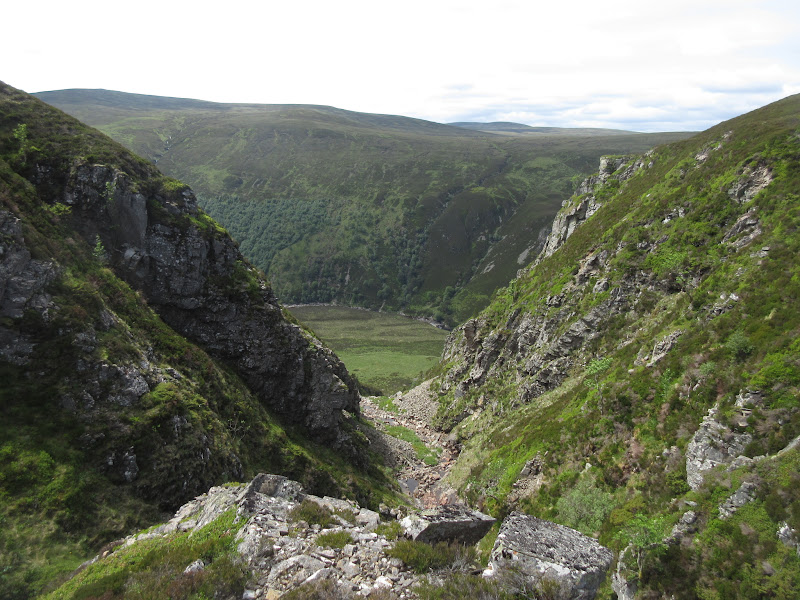 Up at around 800m, the vegetation thinned out and the walking was suddenly really easy. Most of the Moine Mhor plateau is made up of rather unexciting psammite bedrock, giving this part of the Cairngorms a similar feel to Carn an Fhidhleir and upper Glen Tarff to the south. Lovely going underfoot though, and the Feshie/Geldie watershed to the south has an appealingly bleak and remote feel to it. Unfortunately the sunshine had disappeared as I climbed out of the glen, but I knew this would happen, so I didn't mind too much.

Ptarmigan on the plateau: 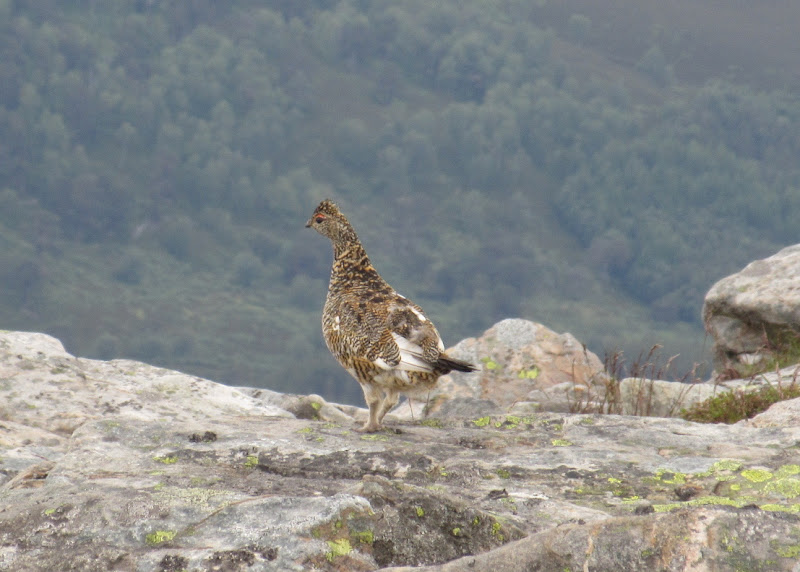 I passed a small weather station on Druim nam Bo and watched a pair of gliders circle this part of the plateau. I did wonder briefly if the weather station had any connection to the gliding club. Then it was onward along a faint track to the summit of Mullach Clach a' Bhlair - only the second time I've been up here.. 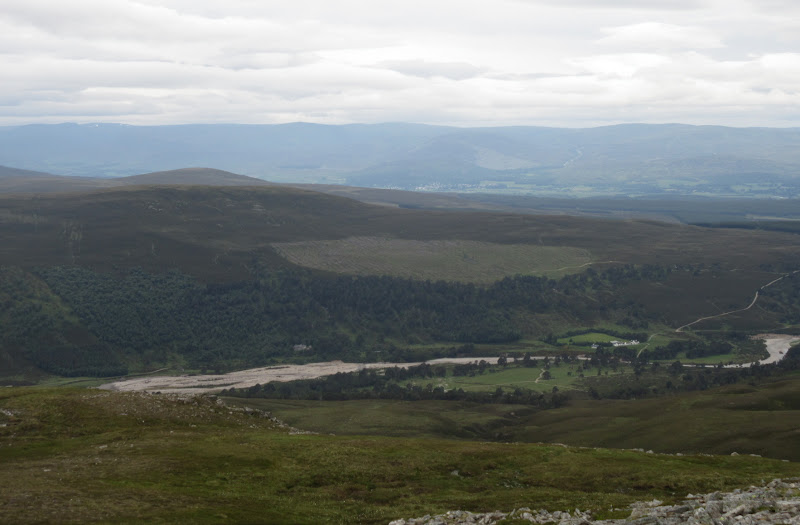 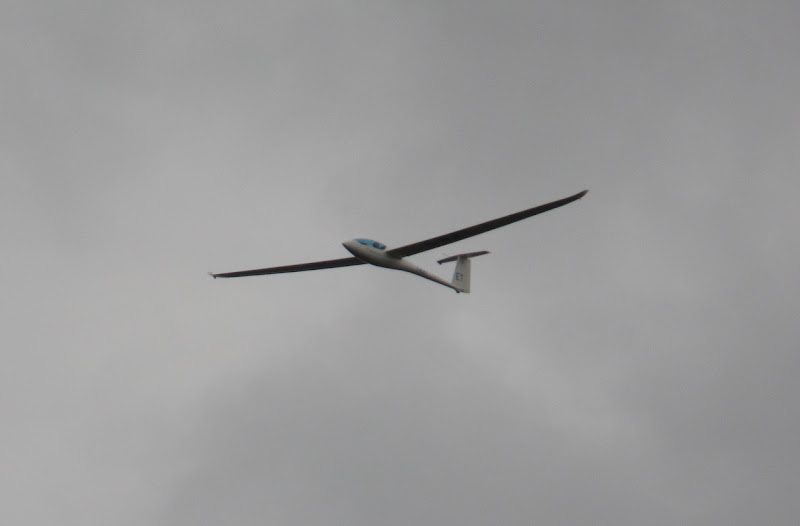 Near the summit of Druim nam Bo: 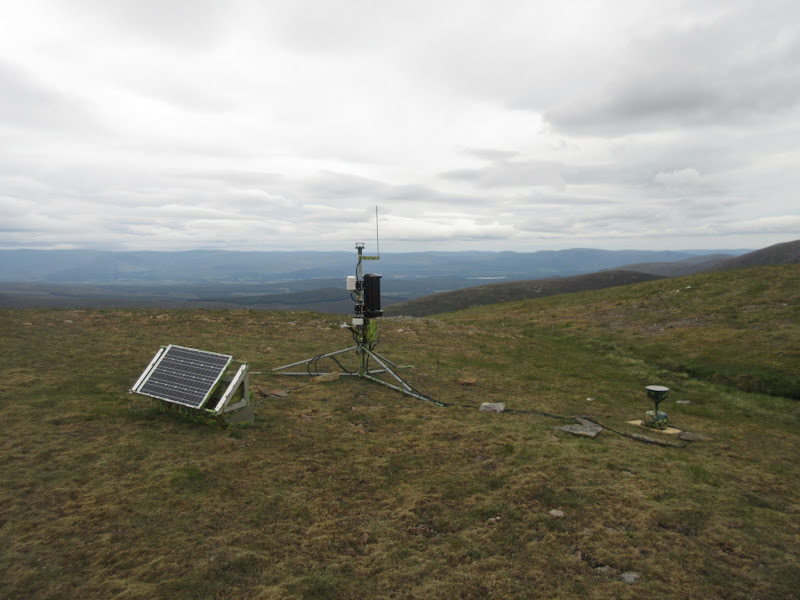 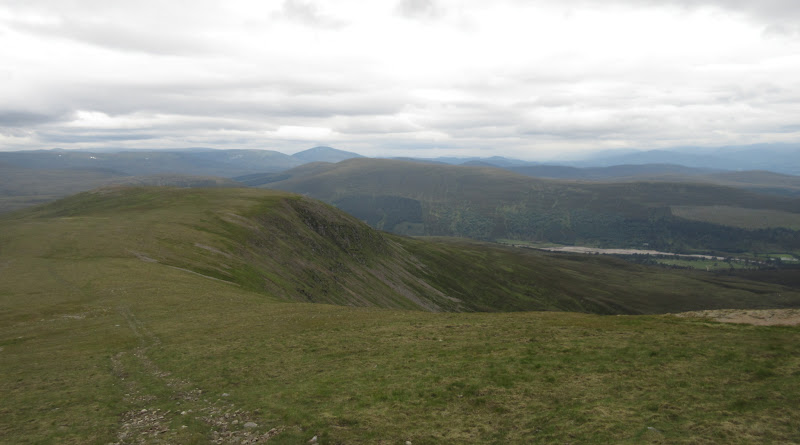 You can't knock this hill too much - it definitely isn't one of the more interesting Cairngorms, but the high summits of the Lairig Ghru don't seem too far away, and Coire Garbhlach is only a short distance from the summit. While I've walked up the vehicle track from Glen Feshie before, I didn't have the forethought to follow the rim of the corrie. This is where the psammite meets more standard Cairngorm granite, and it's pretty impressive.

The biggies – Sgorr an Lochain Uaine and Cairn Toul: 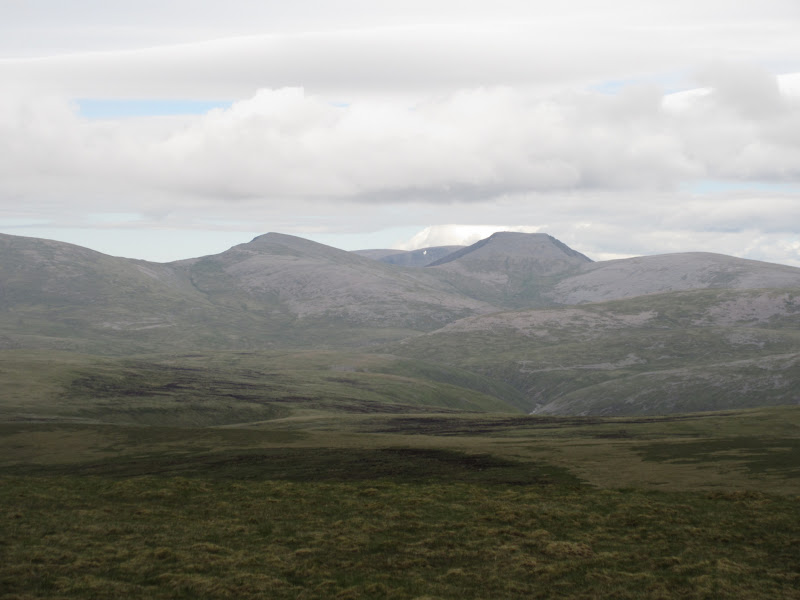 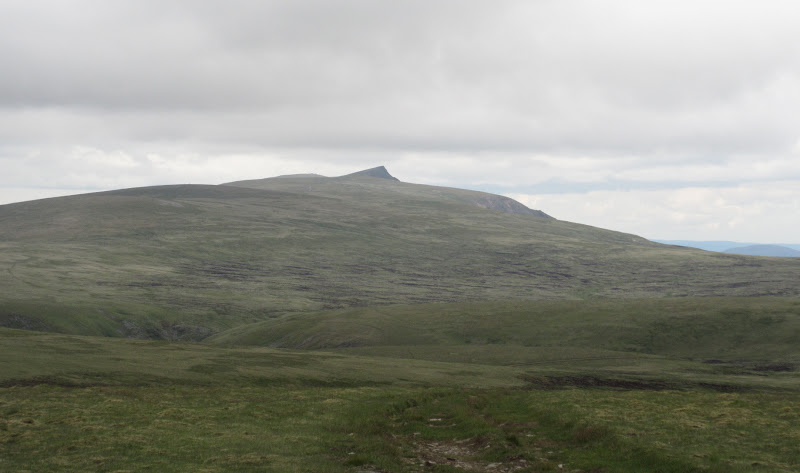 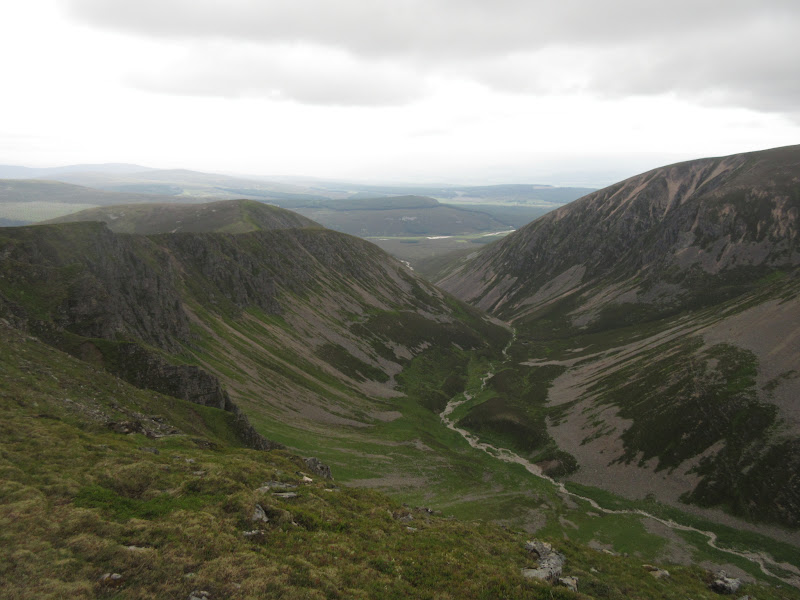 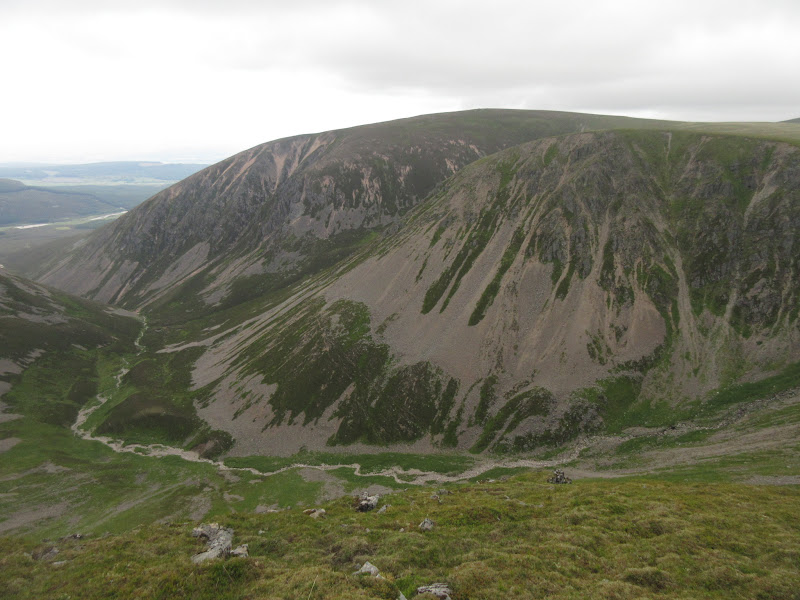 Rim of the corrie: 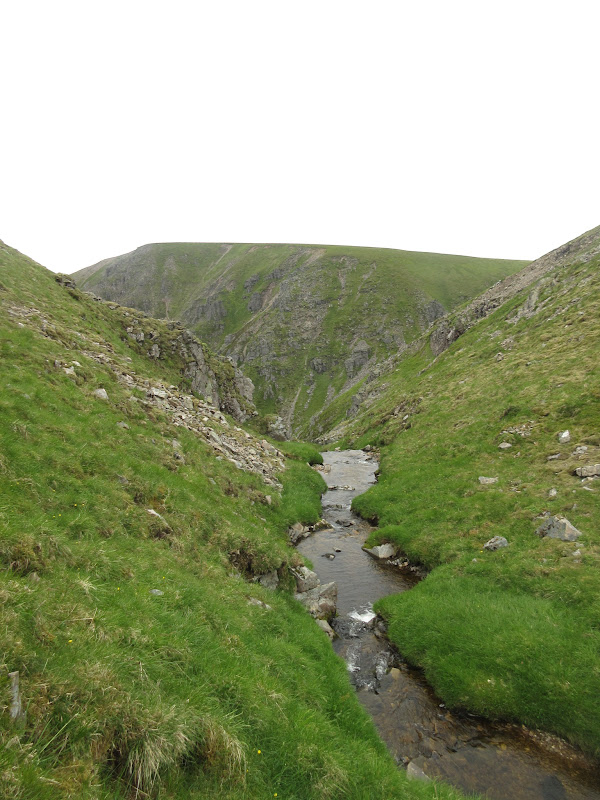 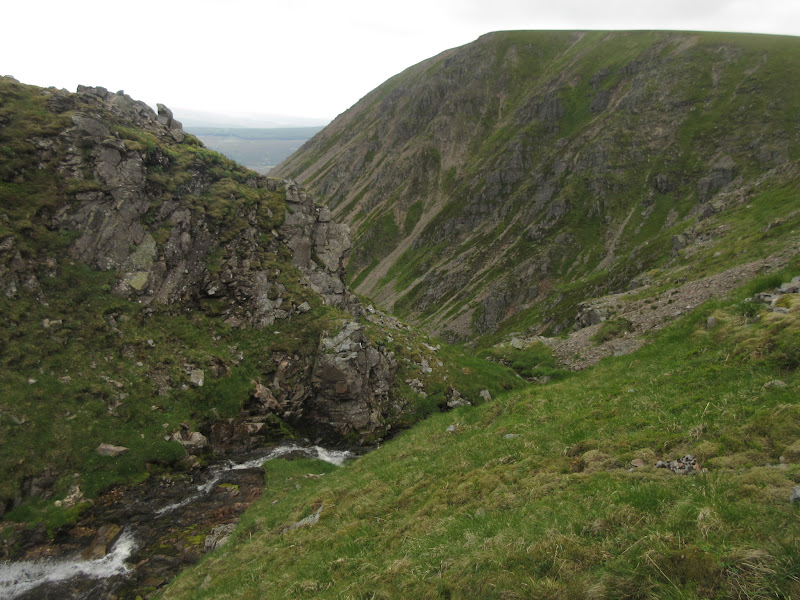 There are a couple of faint paths following the rim of the corrie, and I used these rather than the vehicle track behind. I was headed for Meall Dubhag, then perhaps onward to the good path that crosses Carn Ban Mor. The weather finally moved in as I completed my circuit of the corrie head, and the last 10 minutes up to Meall Dubhag were in rain and cloud. 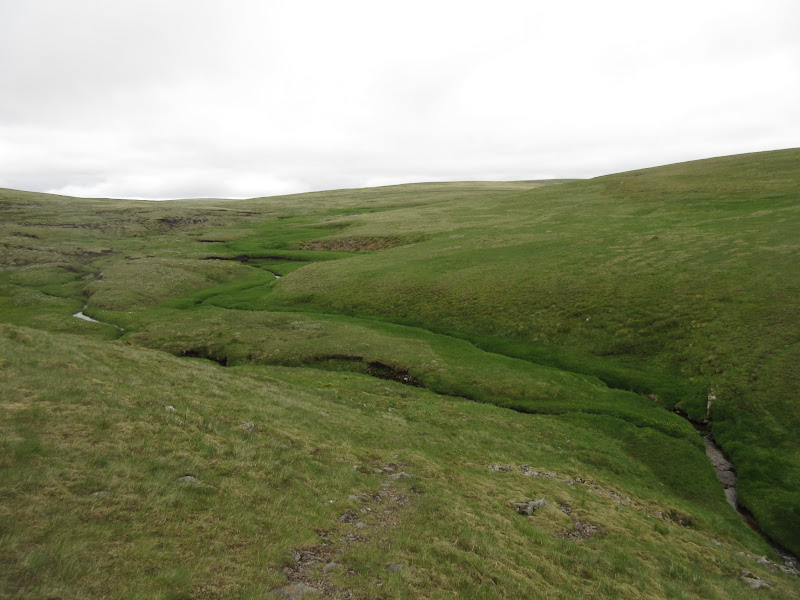 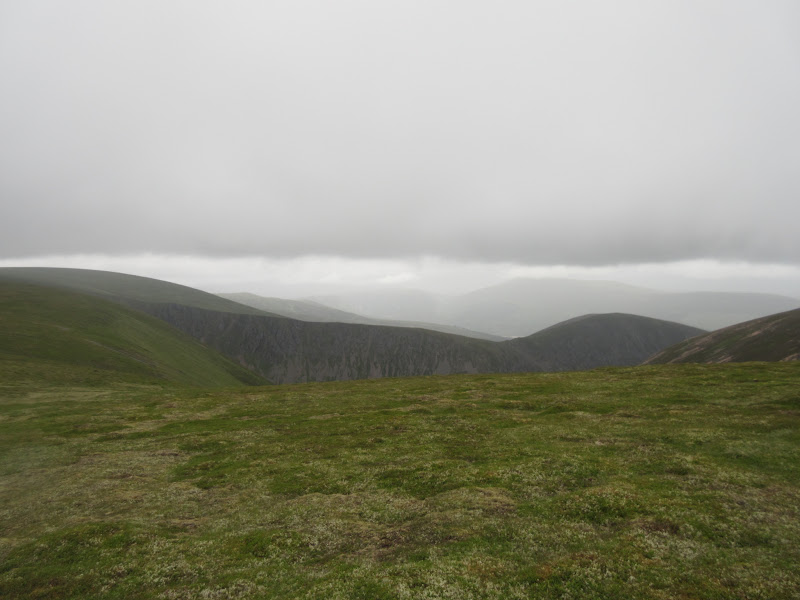 I decided to drop down the SW then northern ridge of Meall Dubhag to meet the path low down, as this would get me out of the cloud quicker. Up high it was more typical granite stones to wander across, then the going became harder and more heathery low down. As expected, crossing Coire Fhearnagan was a bit rough - would have been rather boggy in wetter conditions I think. The hardest going bit was right down by the burn, where the ground was full of tussocks and holes, before I picked up the line of a dismantled fence and was soon on the path.

A bit of a damp ending (and quite midgey at the car), but a nice day out on a different corner of the Cairngorms. Now what is really required is to dust off the tent and head for the eastern plateau (Ben Avon etc) from the north...

Re: Grabbing the sunshine in Glen Feshie

Glen Feshie is beautiful. I've not been as far south on that side so it's good to see the views from a different angle.