In the Clova - four hills and a pointless bivvi

In the Clova - four hills and a pointless bivvi

Time to squeeze in another walk in between holidaying with the boss, and returning to work. Another mad dash up and over the border, this time to the southeastern highlands, no visited since student days over 35 years ago now ....

Time to go a'baggin or so I thought. Initial plan was to park in Glen Doll Forestry Commission car park, take a pack with overnight bivvying kit, walk north and see how much I could do before lack of fitness/food/water/mojo kicked in.
A relatively sleepless night followed by a 6 hour drive was not ideal preparation, but I filled in my route card at the car park - told 'em I'd likely be there overnight (despite the "No overnight parking" signs, if you do that they're ok with it), and left the car park just after mid-day. 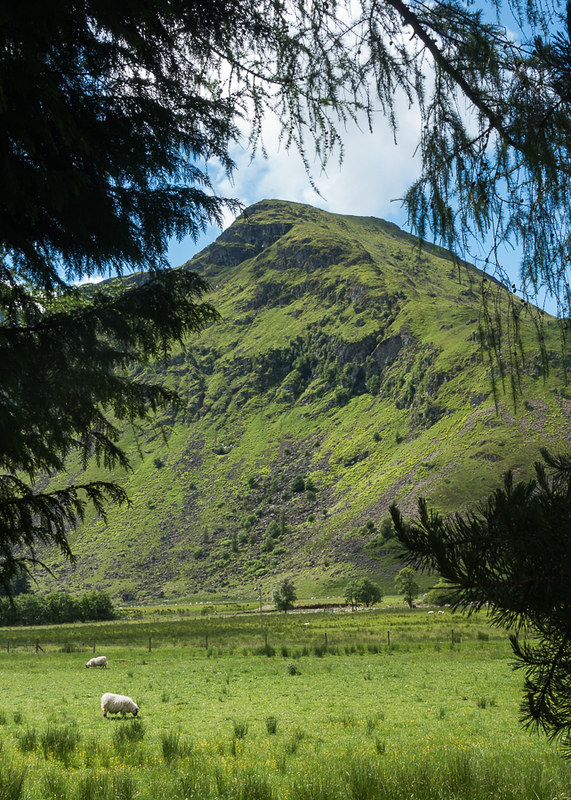 I was taking the Kilbo path, as the intention was to start my loop with Driesh, first track on the left, well-signed, and an easy climb in and out of the woods, eventually leading to the open hillside: 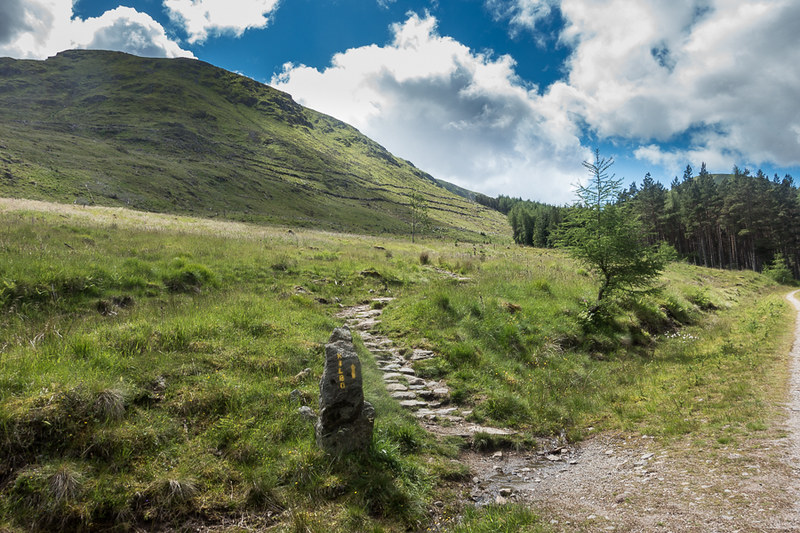 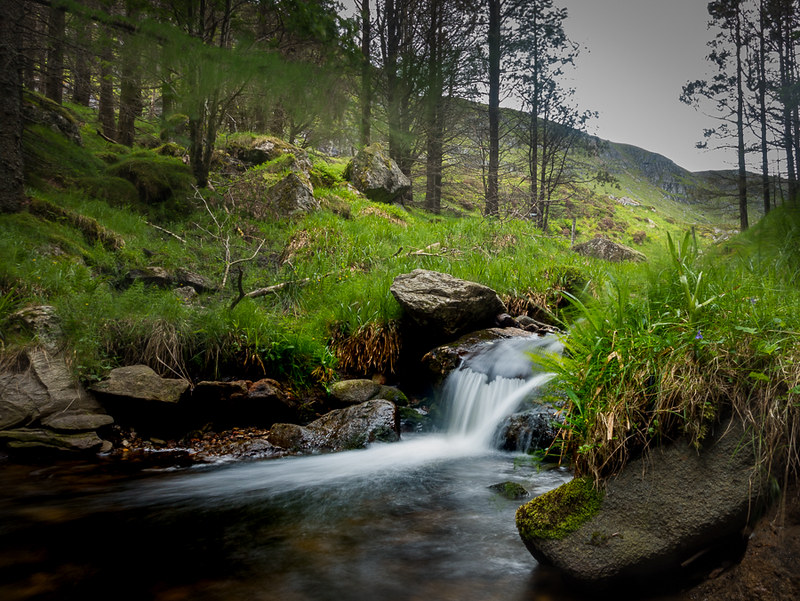 The glen ahead with the path on the hillside flank on the right:

The bealach between Driesh and Mayar, summit of Driesh away to the left: 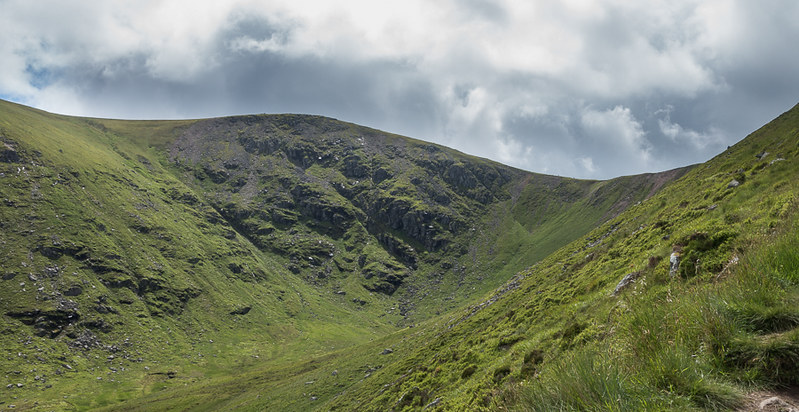 Looking back into Glen Clova: 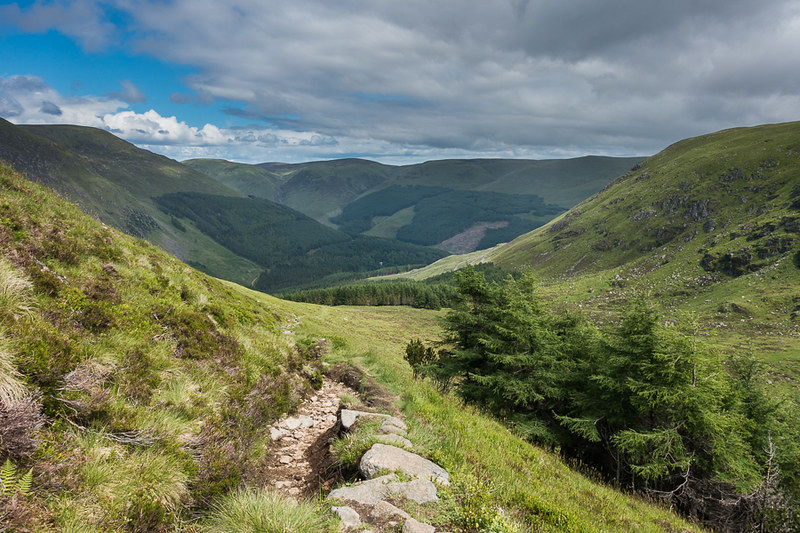 This was a very pleasant ascent, especially for the fuller-figured mature walker carrying an unnecessarily large bag. Turning left (east) at the bealach, the summit slopes of Driesh were equally pleasant, but the wind was biting (40 mph according to MWIS), and the insulating layer went on between the base layer and soft-shell as soon as I got to the summit. Summit - hmmm. Not very summitty in reality, welcome to the eastern highlands. Rolling hills all around, rather than the jagged show-offs of the west, but a different sort of menace in the wind, the openness of the terrain and threat of changing weather, offering an equally primeval experience.

Summit slopes of Driesh, summit in the far left distance: 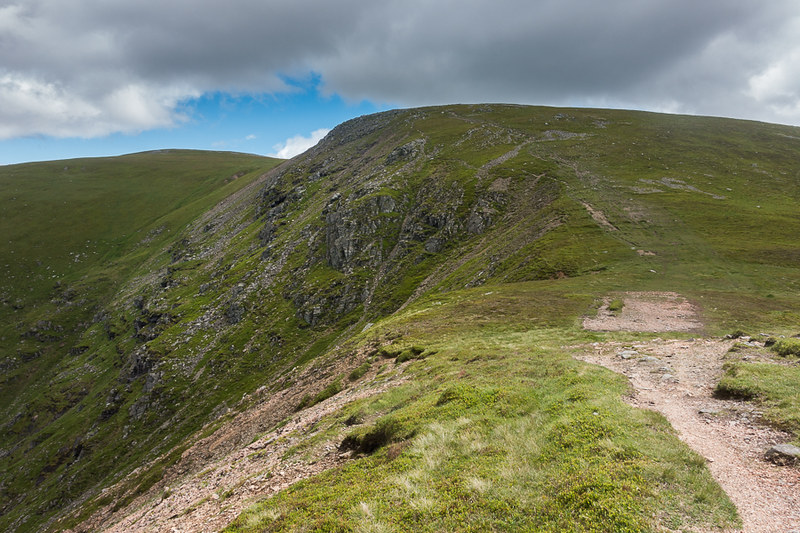 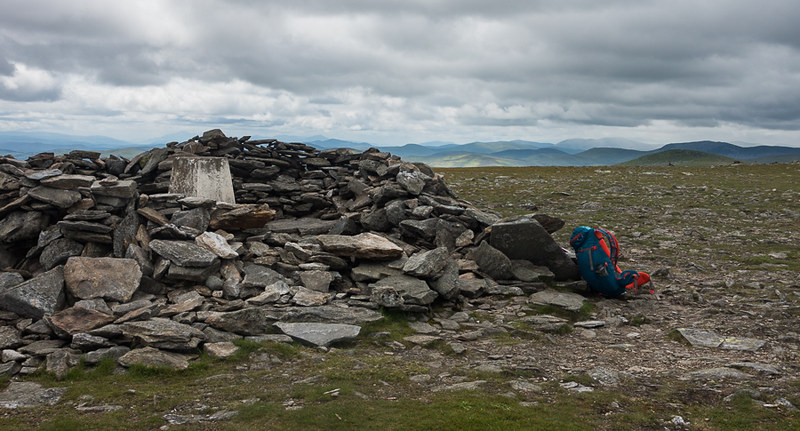 Mount Keen, away to the north-east:

Lochnagar to the north:

Mayar, the next summit: 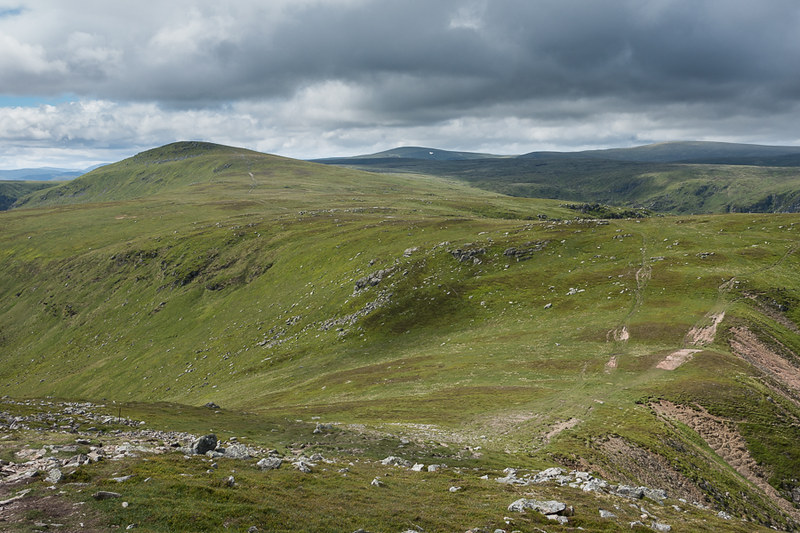 It's probably a couple of miles over east terrain from Dreish to Mayar, and still feeling good I arrived there about 3 hrs and 10 mins into the walk.
Looking back to Driesh from Mayar summit:

Now, at this point I had the first chicken-out option. 3:30 in the afternoon, I could call it a day and drop back down for tea and crumpets, or I could commit to the 4-5 mile slog across to Tom Buidhe. Hmmm. In the end I decided on the latter option and off I set...
The view ahead, it's hard to decide which hill is which, but Tom Buidhe is the gentle rise bang in the middle of the picture, with Cairn Bannoch away to the right: 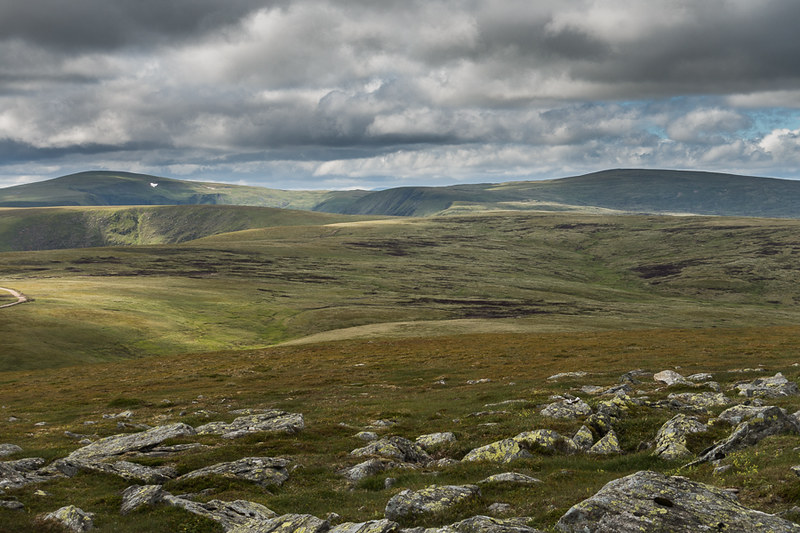 It doesn't look that far, but it's a right old slog across peat groughs and hags, soft swampy spongy grass and I found it energy draining, picking my way through. It took me two hours to get to Tom Buidhe summit, and I was knackered.
Now, I don't want to be unkind, but Tom Buidhe and Tolmount are not exactly Munros that get the pulse racing (from the excitement point of view at least). It does feel rather like they've gatecrashed a party and have been parked outside with a coke and a bag of crisps whilst the bigger boys get on with being proper hills. Nevertheless, they're in the book so deserve our attention.
Final slopes of Tom Buidhe:

Summit of Tom Buidhe, looking NNE, Tolmount on the left, Carn an Sagart Mor in the far distance, Fafernie (great name!), Carn a Choire Bhoidheach, and so on (I'm using the map but also making this up as I go along ...):

Anyway, a pork pie and a Snickers bar later (other mood-enhancing products are available), I was feeling a tad better, and it was on to Tolmount, another less than inspiring little jaunt, down a bit then up a bit. Tolmount summit was marginally more interesting than Tom Buidhe I think, and gave a good view in the evening light back down upper Glen Doll with the previous summit's laid out before me, Driesh in the middle distance, Mayar to the distant right and Tom Buidhe exiting stage right:

By now time was getting on, about 6:30, and I was a bit of a distance from anywhere, the wind had not dropped, it was very cold, and so I decided to take the 2nd chicken out option of finding Jock's Road and wandering back down Glen Doll that way, with a few hours rest in the bivvy bag (sweat box more like). For any normal person, this would be a straightforward one day walk, but seeing as I had nowhere else to stay, and home was 6 hours away, it seemed that breaking it up with a night out would be a good idea... after all I've always wanted to be able to get those awesome sunset and sunrise shots that everyone else seems to publish. You can see how excited I was at the prospect of staying out, contemplated on Tolmount:

The first task was to actually find Jock's road, which goes from Glen Doll to Braemar, over the summit of Crow Craigies (920m), about 1km to the east of Tolmount, but as you get nearer it's apparent that the path is faint in this area.

Crow Craigies is the hill in the middle distance on the right, Lochnagar Munros behind:

Coming off Tolmount, looking NW to Loch Callater and big 'Gorms in the distance: 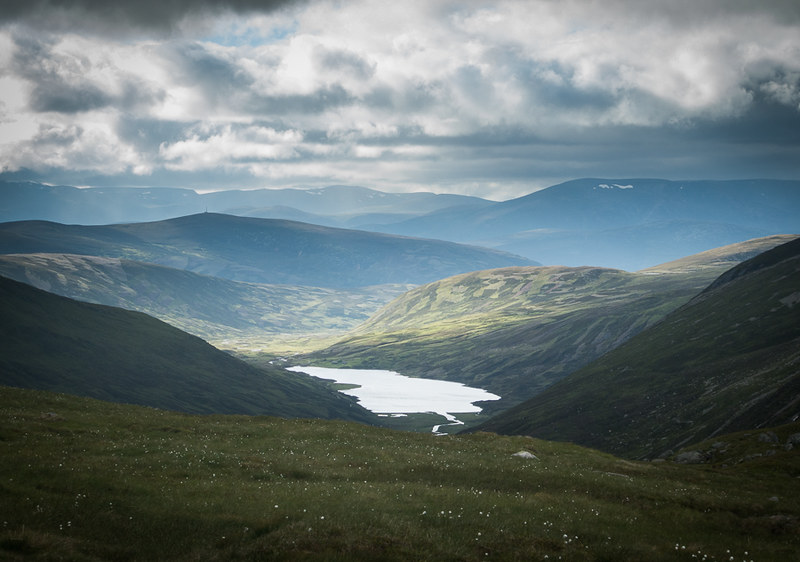 Jock's Road is just about visible once you are on the summit of Crow Craigies. As I dropped off the summit I looked for a spot to rest, even though it was still light for another couple of hours, insomnia, the long drive and 20km walking had made me ready for it. The small summit gave way to excellent views all around, down towards Glen Clova: 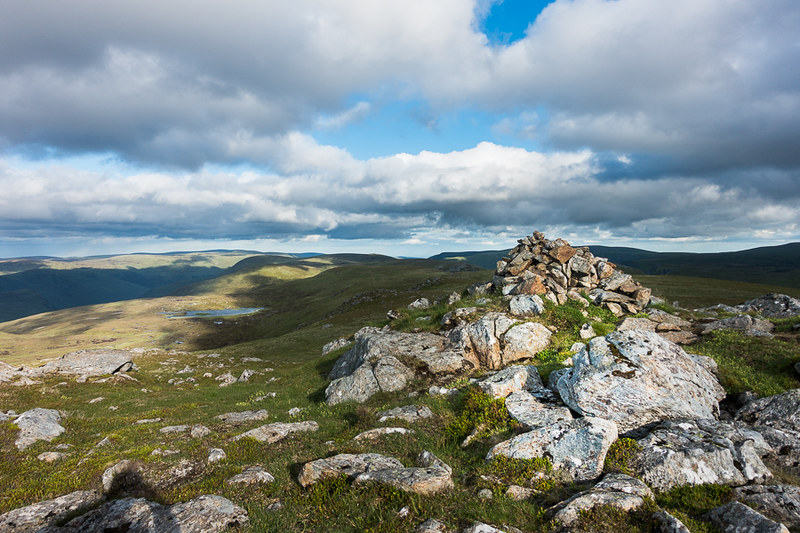 NNE to Lochnagar (in distance) and Broad Cairn:

Dropping south off Crow Craigies, I found a soft spot in the lee of some rocks for the bivvi, but the wind still found a way round to me. I had good views of Mount Keen off the NE and Lochnagar group to the north.
Mount Keen: 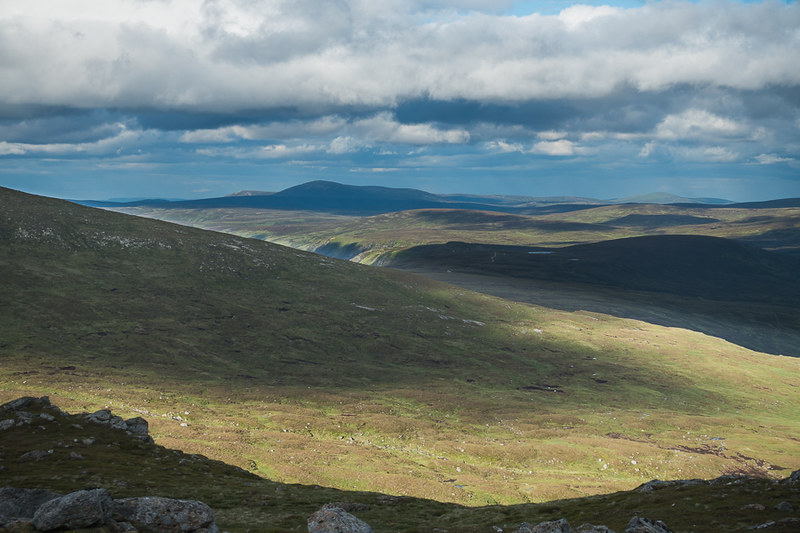 I was facing the wrong way for any sunset pyrotechnics, but it didn't look like there were going to be any in any case. As expected this time of year, there wasn't even any true darkness, and after a couple of hours kip I was able to a semi-decent shot of the sunrise over Lochnagar and Broad Cairn:

Now, on reflection I'm not sure me and bivvy bags are going to be the best of mates. I carry one on long days in the hills as some sort of emergency shelter, but no matter what it claims, it ain't able to breathe faster than I can sweat, and the condensation was not the most pleasant experience. As my tent is only a little heavier and provides a much more comfortable experience, its that for me from now on ... probably.
Once it had started to get light again I was no longer able to get any sleep so packed things up and went back to find Jock's Road for the remaining 7 km back to Glen Clova.
At this point the path is still indistinct and messy, but after a few hundred yards I came upon works for building a decent track, and quickly the path became obvious and well maintained descending into Glen Doll: 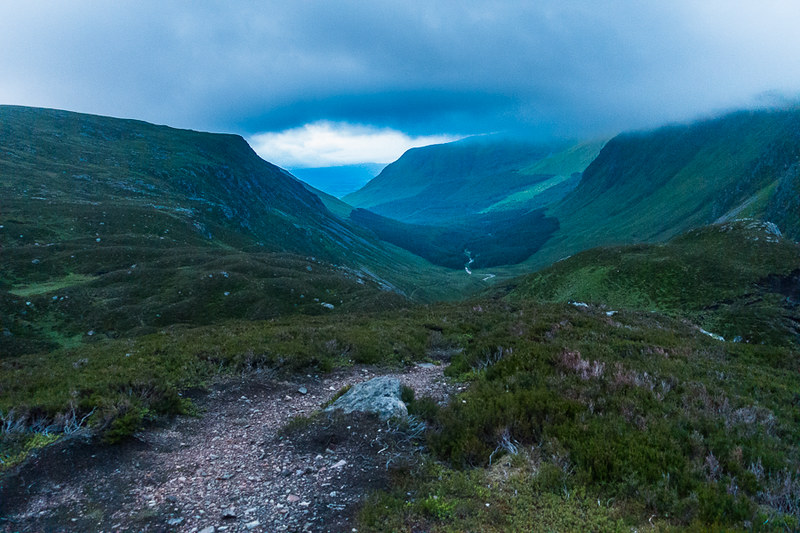 At the top of the descent into Glen Doll is a small shelter with a red metal door, not unlike an old fashioned post box built into a wall, not sure I'd really want to crawl inside.
Looking back up Glen Doll, the red shelter door just apparent: 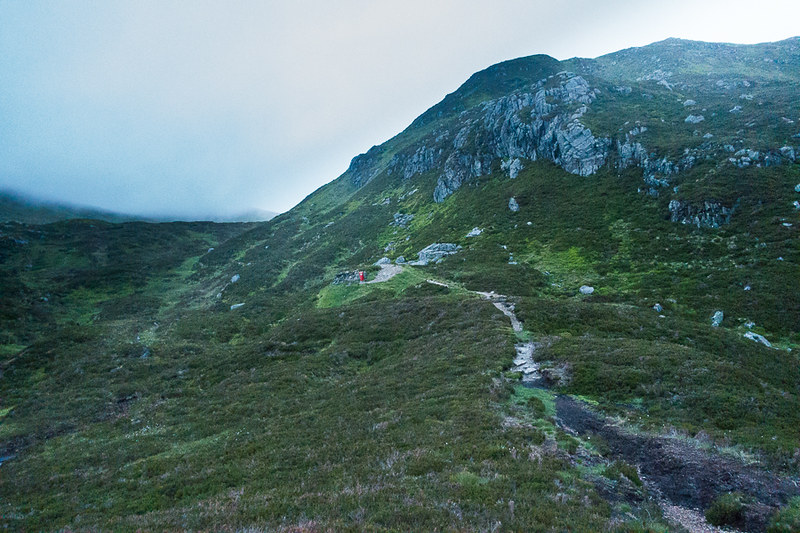 Descending Glen Doll, even in the flattened dawn light, was a truly wonderful way to end the walk. It may have been a daft way to do this route, easily done in one long day, but 'twas a bit of an adventure none the less.

Well done Jonathan for getting out and bivvying! Sounds like you are sleeping in one of those plastic emergency bivvies that I have in the back of my rucsac. I am waiting for that weather window before i bivvy.

If you enjoyed it then it's not pointless

Looks fun, despite the grumpy pose

Great description of Tolmount and Tom Buidhe. Multiple checking of satnav and map to convince yourself you really have reached a summit!

Enjoyed reading that. Your pictures really show off that area, love the one of the sunrise over Lochnagar

. They make me want to go back there, though perhaps not for Tolmount and Tom Buidhe

. I had to chuckle at your description of them.
Nice wee adventure!