It has been a month since my last outing. The forecast this week hasn't been great although Thursday was indicated to be the 'window in the weather' that gave me the encouragement to get on the hills again

I didn't fancy the central fells as they can often be busy at this time of year, so I opted to head out west again and climb the hills I had seen from Grike and Crag Fell at the opposite side of Ennerdale Water, namely Great Borne and Starling Dodd.


2016-06-30_0907 Great Borne.gpx Open full screen  NB: Walkhighlands is not responsible for the accuracy of gpx files in users posts

I parked at the Bowness car park on the north side of Ennerdale Water and was walking by 10.05am. I walked back along the tarmac road about a quarter of a mile until I reached a stile leading me onto the path running up behind Bowness Knot and in the general direction of Rake Beck. It was a good path albeit the bracken is now beginning to dominate and a machete may be useful in a few weeks time! On the road from the car park, heading towards Herdus When I reached the north side of Brown How, the path steepened as it headed northeast wards up the gully that would bring me out between Herdus and Great Borne. I was pleased to reach the top of the gully and then have easier going over firm/rocky ground to the summit of GB. View down to Ennerdale with Bowness Knot in the foreground and Crag Fell behind.... 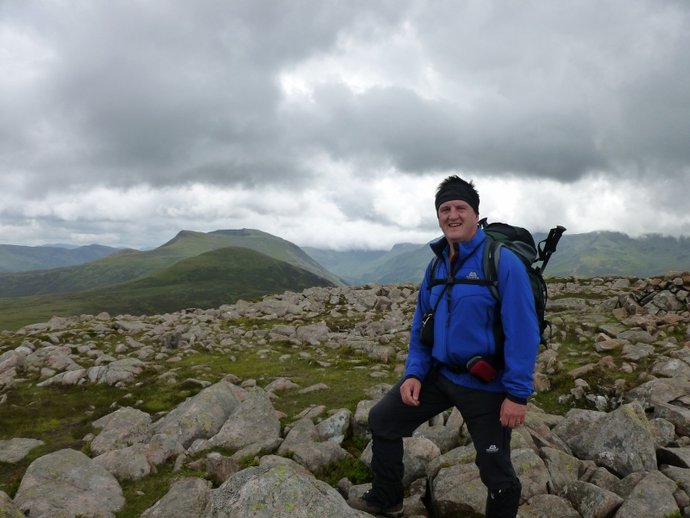 I stopped for a cup of coffee and to examine the health of my left foot, Compeed applied and it felt much better. Met a gent who had walked up from the Northern approach and was then heading to Buttermere to meet up with his family. He disappeared into the distance before I got to my feet again. Zoom-in to the Grasmoor hills

My next target was Starling Dodd. The terrain was good and the path could easily be seen descending the eastern flank on GB and then steadily rising up the western side of SD. I made good progress and reached the, dare I say 'bald' and relatively undistinguished summit, which boasts two cairns with a mixture of stones and old rusting metal fence posts. There was a keen wind blowing so I dropped down a little from the top to reach a more sheltered vantage point and then had some lunch. On my way to Starling Dodd Looking back to Great Borne View north to Mellbreak, Crummock Water and the Grasmoor hills. Whilst I was chewing on my ham and mustard sandwich (my favourite combo), I was taking in the view in front of me of the next mile or so of the ridge; nearest to me was the small mound of Little Dodd; then there was the more impressive Red Pike, aptly named by way of the red coloured scree. I was feeling good and was ahead of estimated time to this point so decided to add Red Pike to the walk. Red Pike from side of Little Dodd

Conditions under foot were still good and although one or two patches were showing standing water from the previous day, generally the paths were 'sound'. From the slope of Red Pike, looking back to the route so far

Apart from the guy on GB, I had seen no other walkers (this is one of the reasons I like these Western Fells), however this was about to change with Red Pike readily accessible from Buttermere and consequently walker/tourist friendly, although not to the same extent as say Helvellyn. I took a couple of photos on Red Pike before noticing a 'bimple' over to the Ennerdale side of the broad, flat ground. I headed over to it and thought it may provide a better angle to take a picture back down Ennerdale. It was noticeable that the rock was of a different type and colour and when I looked at the map, I saw that it was called White Pike. on Red Pike with High Stile in the distance ... and this time without the ugly bloke! Looking down Ennerdale from White Pike

All I had to do now was to head across the South West flank of Red/White Pike and pick up the path to descend into Ennerdale. To be honest, the terrain was good and walking was relatively easy over a mixture of short grass and sparse small stones. It made for good progress until the path steepened and re-entered the bracken again (machete at the ready lol: On reaching the vehicular track that leads up/down the valley, I was soon alongside the lake and back to the car.

Another enjoyable day in the hills. The weather had remained dry and although not spectacular, it made for good walking conditions.

Great report of one of the less well known corners of Lakeland - never been to Herdus or Starling Dodd, but after seeing this, will try to get over there some time!

Great stuff MR, it's something to remain dry at this time of year

A good looking hike with very few other folks cluttering up the place which is always an added bonus. Compeed plasters are the best invention of the 21st century

Tim - thanks for your comment - I would recommend this as mid-range walk with relatively easy going.

Chris - good to hear from you, cheers - yeah, I'm not anti-crowds but if I had a choice I would pick a quieter area. In the Lakes, it's just a matter of getting the right time of year for the right hill.