With all the shenanigans going on in the UK over the last few weeks, I couldn't think of a better place to be after the EU vote than Strawberry Cottage in Glen Affric. I last stayed at the An Teallach Mountaineering Club hut 9 years ago, and knew if I had a chance to return to this idyllic location I'd take it! With a 7km walk-in from the last public road at the very end of Glen Affric its not an easy place to carry a load of stuff! Staying there last weekend was the perfect antidote to get away from it all ! It's a perfect base also to tick off a lot of the Affric Munros in the area. It just so happened I was hoping to celebrate my 100th Munro this weekend and by coincidence it was also a club meet at the cottage....always good to mark the wee achievement sharing a dram with friends!
I arrived in Inverness on Friday hoping to sneak a wee Munro, possibly Tom a Choinch before walking into the cottage. However delays with my flights meant I didn't leave Inverness till after 1.30pm not arriving to Glen Affric nearer 3pm. So not wanting a long day, again by coincidence I arrived at the car park at the end of Glen Affric at the same time as old friends who had a key to the cottage. Note, take change with you to park at the scenic car park at ref:201234. We had a pleasant walk to the cottage following the Affric Kintail Way on the south side of Loch Affric. A circular route of the Loch can also make a pleasant low route 1/2 day for another time! We managed to avoid the torrential storms that were surrounding the Glen. Just as we arrived at the cottage, the heavens opened, and the thunder set in! Friday evening I think 12 of us were staying in the cottage, all planning the same Munros but attacking them from different routes. This route starts from Strawberry Cottage (ref-133205) however the route could just as easily start from the car park at the end of Glen Affric (ref 201234). We followed the Affric Kintail way west from the cottage for about 400m before leaving the way and taking an excellent track NE past Loch Coulavie and Loch Affric. The track is good and only one river could be tricky if in spate. The main river Allt Coire Leachavie has a good bridge crossing it. It took about 1hr from the cottage to reach the base of the track leading up to Coire Leachavie. If starting from the car park, again allow 1 hr, as I did the route the following day just to see what the track was like. The track is excellent and climbs slowly up the eastern side of Allt Coire Leachavie. Along the way there are some nice waterfalls. After about 1hr, you'll come to a small dam, and possible generator? Not sure what it was. From here the track gets a bit steeper as it climbs into the Coire. Climbing into the Coire Getting a bit cloudy A good track can be followed up the Coire to the bealach at ref 117247 and should take about 3 hrs from the start to get there. From here it's an easy walk up to the top of the first Munro at Mam Sodhail. En route you'll pass some ruins and the largest ruin/cairn at the top, which I've been told had to do with the observatory posts when they did the first surveys of the area? Route from bealach to top Me on top of Mam Sodhail

We made it at the top for lunch and again by coincidence met up with the other group who attacked the hills from SW end of the ridge. Munro no 99! For obvious reasons I was keen to plod onwards to Carn Eighe. After a short descent off Mam Sodhail a good track can be followed along the ridge up to Carn Eighe. The small top in the middle can be bypassed. The walk up to Carn Eighe is easy enough and again a good track can be followed. I was given the privilege of being the first up the hill. As soon as I got there I got my whiskey out and we celebrated with a few drams. At this point I tried to work out how long it would take to reach 200 munros (and how much it costs travelling from the SE each time!!) ..but decided not to think about that and just enjoyed the moment! After everyone arrived and suitably watered/whiskied we plodded along to the 3rd Munro of the day, and possibly one of the most remotest and most difficult to get to, Beinn Fhionnlaidh. As you need to either climb 2 munros to get to it or attack it from the other side via a boat trip, I was keen to get this lump done! Although the clouds looked threatening all day, the weather was still holding....just! Coming off Carn Eighe, care should be taken to stay on the western side of the ridge, as the eastern side has crags you don't want to be falling off! Again a good track leads off the hill heading north to Beinn Fhionnlaidh. It is a 2km plod between both hills, but time passed quickly when you're nattering away! Route off Carn Eighe with Beinn Fhionnlaidh in distance 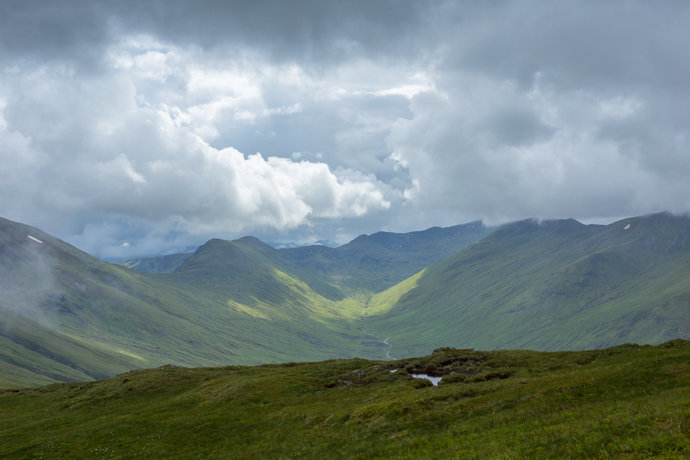 Looking at the glen behind us....clouds gathering

By the time we got to the 3rd munro the weather started to change, the rain came.... The route back was essentially the same. You can contour around Carn Eighe easily enough but we climbed Mam Sodhail again to recover a lost camera in the group. Our original plan was to follow the ridge SW to go to Bealach Coire Ghaidheil and take the track down to Glen Affric. However given the stormy conditions and torrential rain and poor visibility we decided to descend from the bealach we climbed and head back to the cottage the same route. Better to be rained on, on the way home than at the beginning! We eventually arrived back nearly 11hrs from when we started, soaked but enjoyed every moment! A few more whiskies were drunk that night and the craic was good. The next day with a flight to get I decided to walk out back to the car park and do the north track of the Loch, which was also in excellent condition. It was a beautiful morning possibly even too hot for munros! Sunday at the cottage 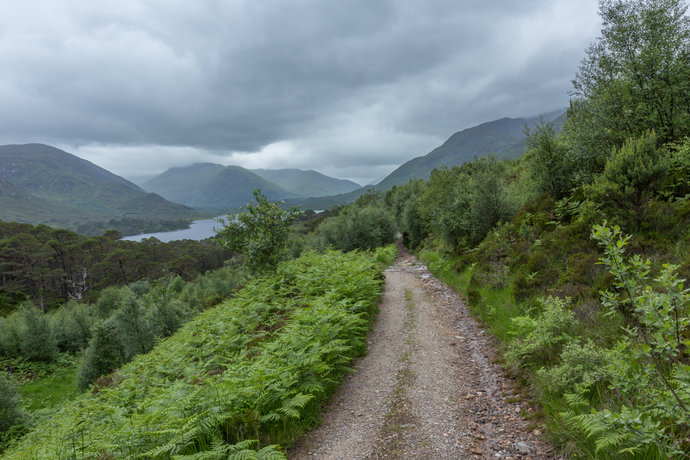 North side of Loch

We all departed the cottage and went our separate ways back at the car park. I did the north side of the Loch, and followed it with a walk through Dog Falls further east in the Glen. I arrived back at the airport only to find there was a 4 hr delay to my flight, eventually getting home 1am. Still, a great weekend....I only hope it doesn't take another 9 years to get back to one of the most beautiful glens in Scotland!

Well done Seamus, a big number and a big mountain.

Congratulations on your 100th munro and well done for also doing Beinn Fhionnlaidh!

I've heard many people say they couldn't be bothered with losing all that height from Carn Eige, and then regretted it later when they had to come back for it.
I like your approach to these hills. I haven't been to Glen Affric yet, but definitely must pay it a visit.