Sooooo for far too long I have been stuck on 90-something munros.
Finally I had the chance to get to the ton mark and maybe more

We set out for Dalmunzie, up the A93 and down the badly rutted single track road from Spittal of Glenshee towards the fabulous, and expensive, hotel. The weather forecast was for rain and perhaps worse. We knew it was an excellent track up to Glas Tulaichean and resolved to at least get one done if the weather turned for the worse. We set off at 9am and made for the high track, following the dismantled railway up towards the ruins of Glenlochsie Lodge.. Even compared to some relativey recent photgraphs, the lodge seems to have deteriorated into a considerable state disrepair, I wouldn't fancy getting too close! As we crossed the wee burn at the back of the lodge we met two sets of walkers and spoke to them off and on all day. All of us felt amazed at how good the weather was compared to what was forecast. Walkers 1-0 Sean Batty!

We plodded on up the fantastic track, gaining height up the Breac-reidh ridge. The climb steepens up just before the cut off, at a wee cairn for the path leading to the summit. Back behind us, we had a fine view of Beinn A'Ghlo's battle with the clag, cloud and rain. Whilst over to our left the second target of the day, Carn an Righ was completely clear of any cloud cover. Would our luck hold? From the cut off, it's only a short jaunt to the trig point summit and views become more extensive. Far from being a damp squib for my 100th, it was a far better day than expected and we quickly decided that we would continue on and attempt Carn an Righ too, as all the surrounding summits seemed to be mostly clear. We droped a little below the summit and sat with a great view of Glas Choire Mhor for first lunch. Just as we were finishing the first shower of the day passed over. We prepared for the worst, waterproofs on... then had to stop 5 minutes later as we were boiling over, the rain having come to nothing.

Losing height down Glas Tulaichean's eastern ridge, we cut off to the north and dropped down in height, heading for the path that cuts across the side of Beinn Iuthern Mhor's outlier, Mam nan Carn. The going down the side of Glas Tulaichean was pathless on short grass, nothing too difficult. We aimed for a gap in the bog to get us up and across to the path at the bottom of Mam nan Carn. This path was a bit of everything, some good bits, some muddy bits, some rocky eroded bits but, it makes a beeline for the base of Carn an Righ. Carn an Righ was reached in no time and we began the plod up the rocky path to the 902m point, before the path dog legs to the right and several wee boulder fields are crossed before the summit is reached, sooner than I expected. 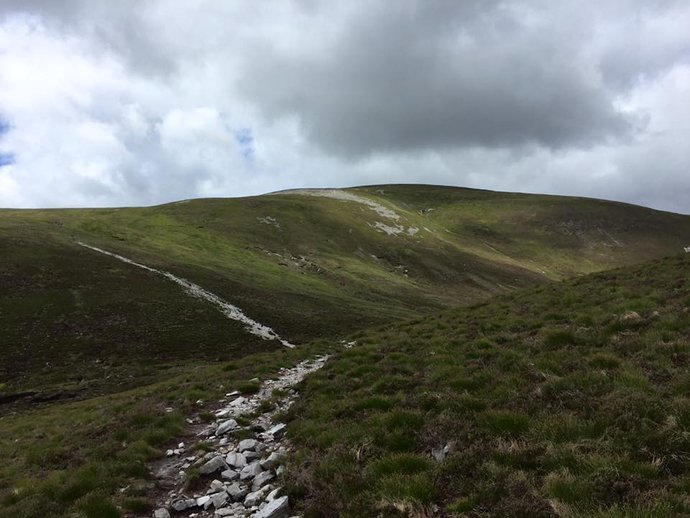 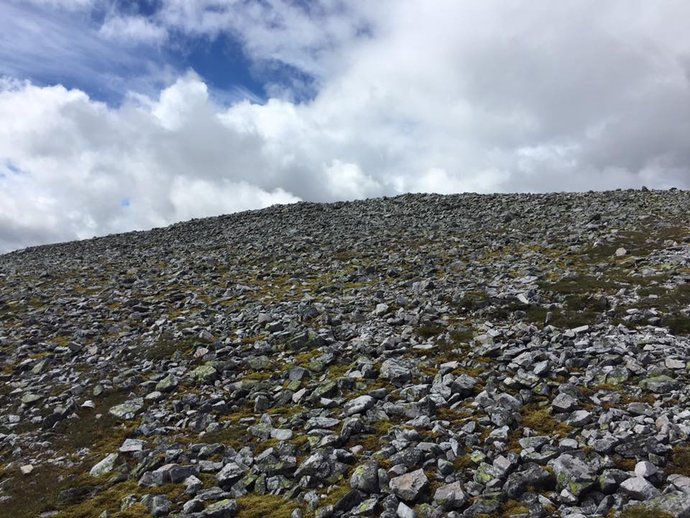 The King's Rocky Hill may not be the biggest hill and it's easily climbed but, it certainly is a superb viewpoint. To the north the Lairig Ghru, the west has Beinn A'Ghlo, the east Beinn Iuthern Mhor, Beinn Avon, Meall a'Bhuird and to the south Glas Tulaichean. 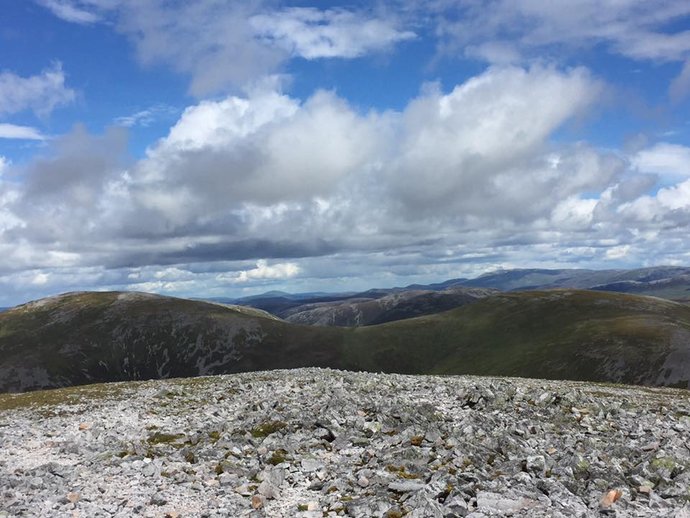 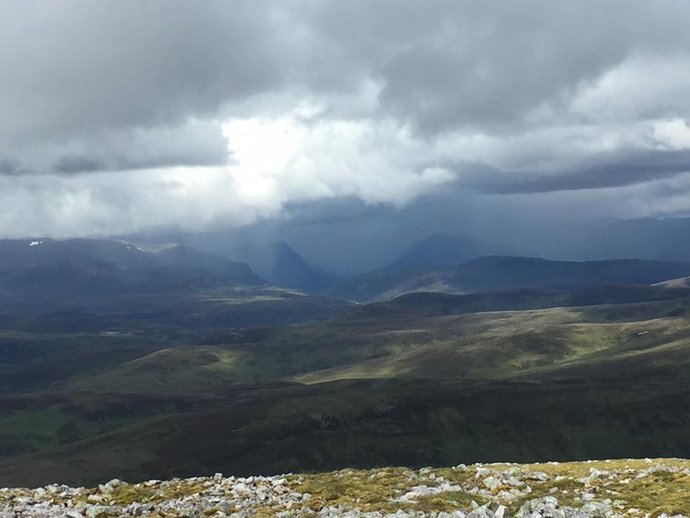 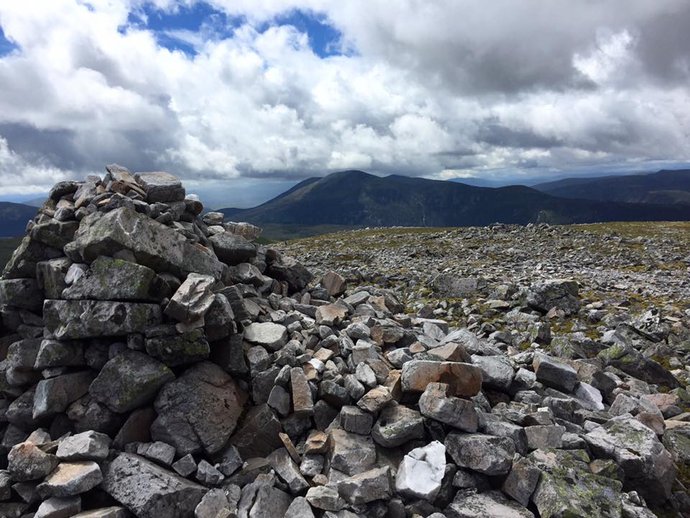 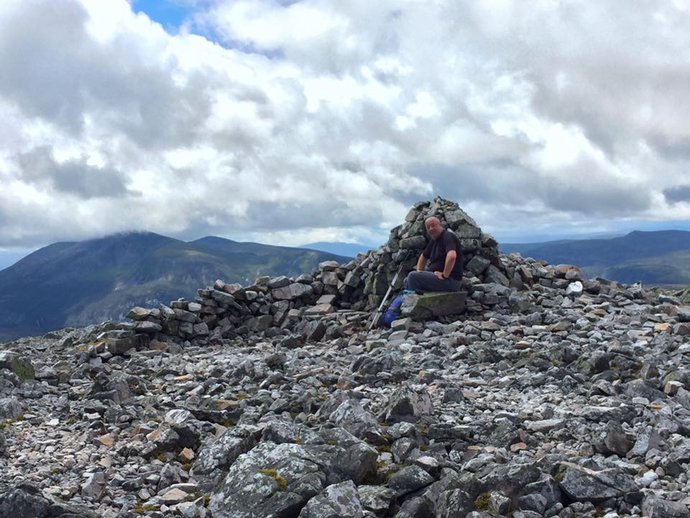 Second lunch, just like the first, was abruptly ended by the threat of rain sweeping over Carn an Righ and we made a hasty retreat down the hill into Gleann Mhor. Once again however, we were stopping sooner rather than later to take the waterproofs back off, as once again, the rain lasted no more than a few minutes. We made quick work of Gleann Mhor was were soon emerging out into bog wonderland just south west of Loch nan Eun. 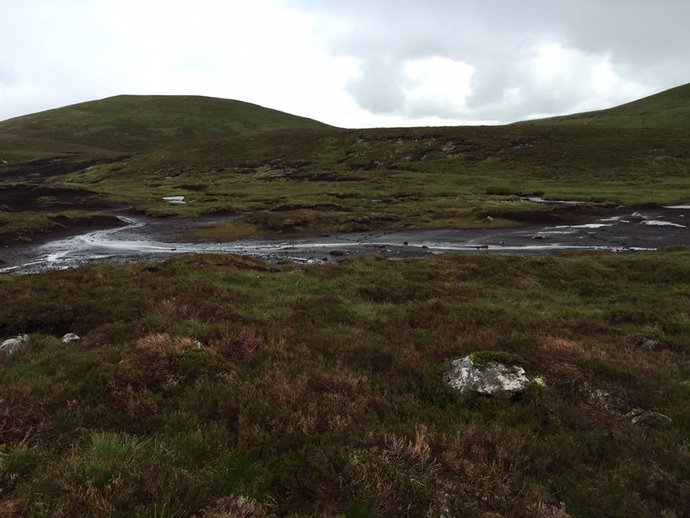 The path skirts through the narrow grassy band between the heather on the hills and peat hags in the glen, although it's a wet path it does avoid the worst of the bog, before cutting across it to the southern shore of Loch nan Eun. We stopped for a breather at the side of the loch, just beside it's outflow down into Gleann Taitneach, fabulous views all around. 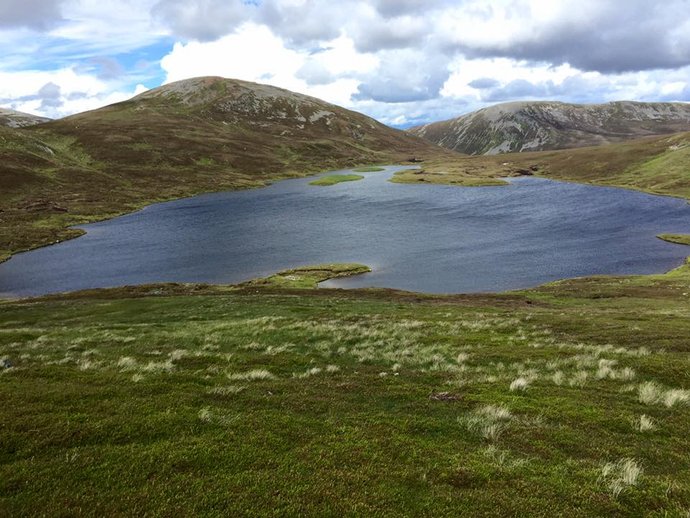 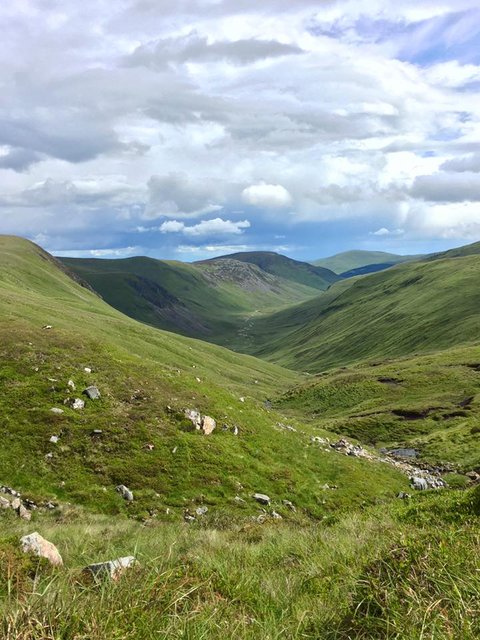 The drop down into Gleann Taitneach is steep at first and the path is a little tricky as it loses height down beside a sepectacular set of waterfalls on the Allt Easgaidh. The falls, just seem to go on and on, one cascade after another, dropping over 200m in total. I thought they looked spectacular. 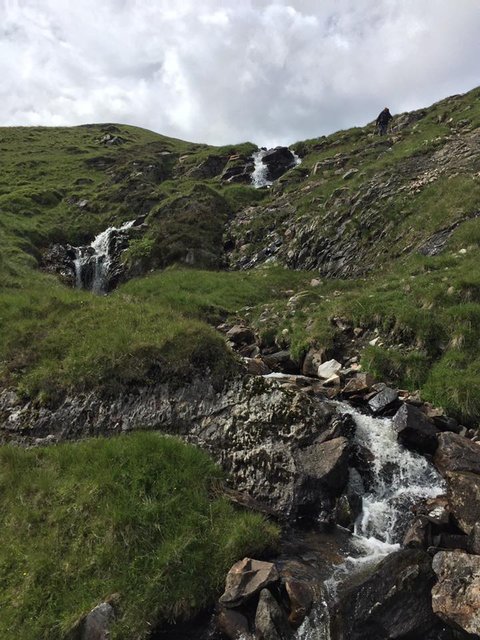 Eventually we reached the bottom of Gleann Taitneach, we kept looking back over our shoulders, both at the waterfalls and the bands of clouds that would threaten us with rain, but then sweep harmlessly overhead. Only once more were the waterproofs required. As we walked under the prominent wee peak of Carn Bhinnein; a superb looking rocky peak that we had good views of all day; the sun came out and the waterproofs were put back into our rucksacks, never to be used again. 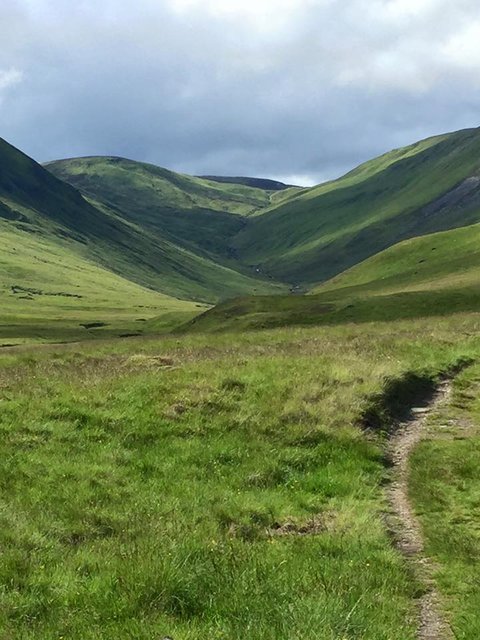 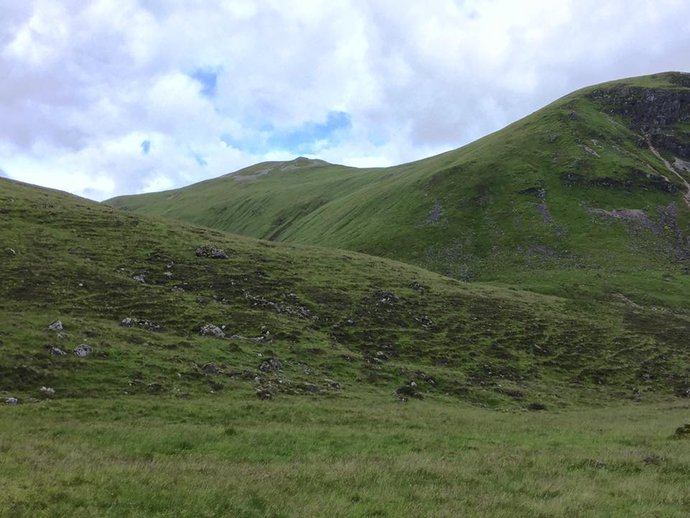 We forded the Allt Elrig just above where it joins the Easgaidh to form the the Allt Ghlinn Thaitneich, which we followed down the glen. A pair of Curlew's strafed us and called to each other across the glen but, we soon left them behind making for the rickety wooden bridge at the bottom of the glen and the awaiting car at Dalmunzie 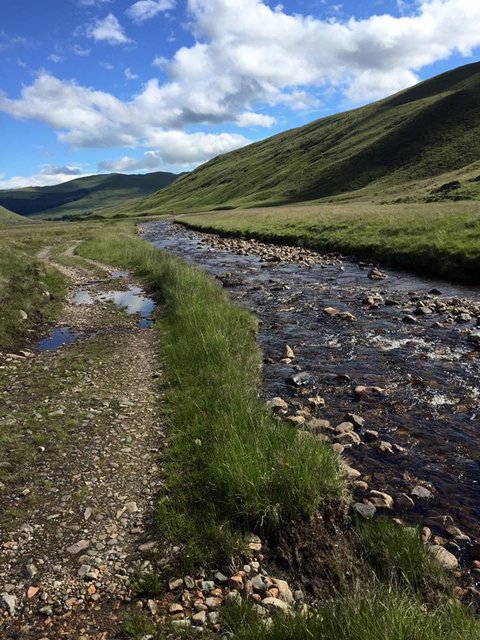 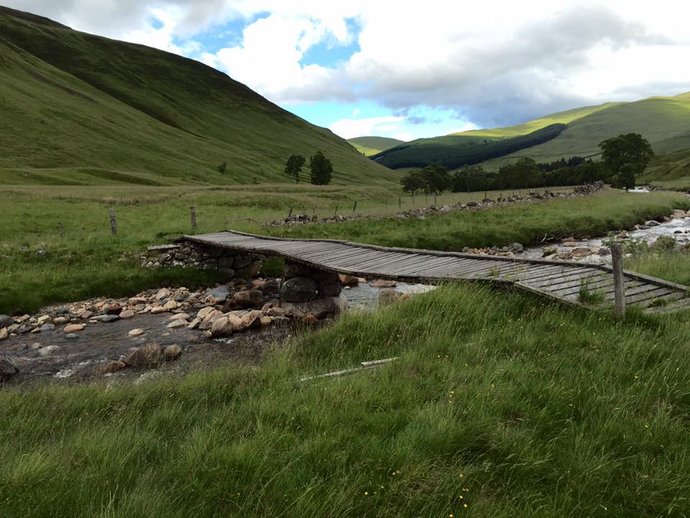 After one of those rarest of rare days, when the weather was much better than the weatherman said it would be, and after a year spent in the 90s, I FINALLY became a centurion! Thanks to Gammy for his company on the day and as always for putting up with my eternal nattering!

Re: A Century and beyond! - Glas Tulaichean and Carn an Rig