Strathfarrar, double nemesis and a battle with the elements

Strathfarrar, double nemesis and a battle with the elements


Right,,,where do I begin? lol After a successful 2 day, 5 Munro trip to Kintail, I headed for Strathfarrar for what would hopefully be my last faceoff with these two.

An earlier attempt to bag the Strathfarrar 4 with Lynne in March, on a lovely blue sky, snowy scened day, ended when we were literally blown off our feet and decided to head off after hill 2. We retried in early April on our way to the WH Gairloch meet, heading up the West end to get these two on their own. Had to turn back around 960mtrs under a big cornice on a horrible damp, dank, low vis day. These two were fast becoming my nemesisisis

Broke camp at Kintail and headed off at 7:15am, arriving at the Strathfarrar estate gatehouse at 8:50am, time to boot up etc and be ready to head straight in as the gate opened. Second car in.

Reached the far West end of the range and had a chat to the first car occupants, 2 women, dropping their bikes off and heading back to the starting point. Weather forecast for today was rain early on, sun later, off we all headed in our own directions, hopeful of a good day.

Having been up to the ridge previously, I wasn't worried about route finding etc, but the river crossing was on my mind as we had to avoid it on our last trip and use the pathless east side of the river. Climbing the track, I mulled over the option of reusing the footbridge above the big waterfall at Eas na Muice. I decided it was not worth getting to the fording point to find it too high to cross, so, footbridge it is. The map shows a track on the East of the river here but apart from a few feet at the bridge, it pretty much disappears after that. Only thing for it is to push on over very wet ground, not so much boggy, just very VERY wet. I stayed fairly close to the river and encountered a lot of troughs, hags, puddles etc,,not the best way to start the day.

After an hour, I reached the point of the river crossing where the track descends and becomes a smaller path on this side. On checking, the crossing didn't actually look too bad, worth considering for the return. The rain had been drizzly on the way up but was now getting heavier. The ridge was under cloud which didn't seem to be moving and all the high tops on the left, Sgurr a Muice, were under heavy clag too. No sign of the promised sun, so, stuffed the camera out of the wet and plodded on. I was following the McNeish route up which heads round Loch Toll a Mhuic, taking a left arc before joining the ridge under Sgurr na Fearstaig. This is the same route we took in April, but the path/s were hidden under snow. I opted to keep climbing straight up to the ridge and head East, rather than using the undercut path across to the right.

As I climbed, looking back round the right, I could see parts of the ridgeline appear as the cloud lifted. It didn't last long

It's a short but steep ascent here and it didn't take too long to reach the ridge. Then all hell broke loose. With no shelter, seriously strong wind, driving rain and visibility about 30 yards at most, I was getting a battering.

Keeping the corrie ledge on my right, I headed off, much mumbling going on at this point. Up on the ridge and getting a battering

It was very disconcerting seeing nothing at all ahead, I knew the route on the map, I should do, I'd looked at it often enough over the past couple of months lol. With nothing to see, I was aware only of the gradual loss in height then again the increase heading up to Sgurr Fhuar-thuill. I reached the summit of 1049mtrs at 12:30 with no break in the weather. Took a quick selfie with the rocky cairn and headed off. 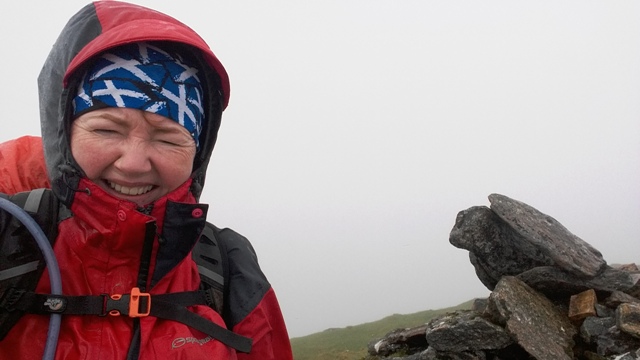 The distance between the two hills here is the biggest on the ridge and crosses 2 beallachs and the top of Creag Ghorm a' Bhealaich. All of a sudden, I could see some views appearing, a loch below to the left and up ahead,,the path started to appear out of the cloud. FAB!,,nope,,that didn't last long either. On reaching Creag Ghorm, I got a glimpse of the summit of a' Choire Ghlais and could see both cairns and the central trig. Then the cloud dropped as quickly as it had risen, mumbling continued lol

Climbing from Bealach Toll Sgaile I could see nothing, rain was a bit lighter but thick cloud just sat around everywhere. Getting an idea of where I am Seeing the summit ahead

The ground becomes rockier and I had to scramble over some larger stuff before reaching the first cairn. Vis was so poor, the second cairn and trig were not visible. But, on the plus side,, the rain was off for a bit. It had taken an hour to get from the first summit to here. I managed a sit down, sandwich out, check-in txt to John, just as the rain started again. I crossed to the trig and the other cairn for a pic there too and headed off. (don't want to be accused of not touching the right one lol) 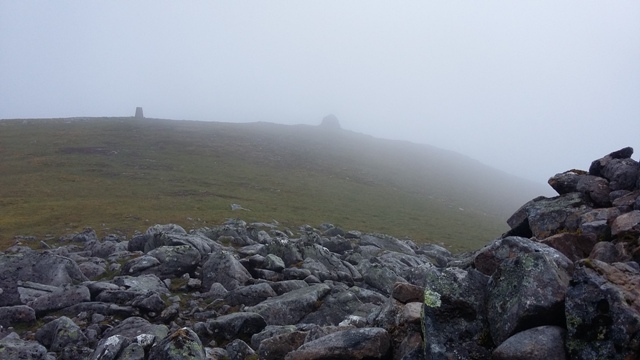 Looking over to the trig and second cairn Another cairn, touched the trig on the way over lol

My hands were frozen lol,,,but with the wind and rain driving, I simply couldn't be bothered stopping to get gloves out so, poles under my arm, hands in pockets, I scrambled back down over the rocks and trudged off again along the path, back to the western summit. I must have looked like a petulant schoolboy, dragging my feet, hands in pockets, head down, more mumbling lol. My only relief was knowing the two women coming across from the East hadn't passed me, that would have been soul destroying lol. (strange thing then happened, I had a nose bleed, never happened before, just hope the rain had washed the big splashes of the red stuff away before the girls arrived lol )

I reached the Western summit again and headed straight over to continue past the col. Wind and rain not letting up here. I'd been walking at over 1000mtrs for a couple of hours now, felt like I'd been hit by a bus.

Kept my eyes peeled for the cairn marking the route off to the undercut path. Found it!

Dropping down, the wind suddenly dropped, what a relief.

There was much celebrating, out loud, singing and expressing my relief at the wind not grabbing every breath I took lol Woooohoooooo

The visibility was still very poor but as I crossed over the muddy, rocky, slippy path, gradually the land below appeared as I dropped through the cloud. The loch appeared, the reflection of the sun on the watery path appeared and eventually, the green hillsides on the route down appeared. Great to see where I was, eventually.

As I reached the junction back where I had ascended up to the ridge, I turned left and followed the stalkers path down beside the burn. With the river ford still to contemplate, I had already decided I didn't care how high it was, I was crossing that goddam river and going down the track. This is about how much rain fell on me in the morning,,,,,the afternoon is another matter 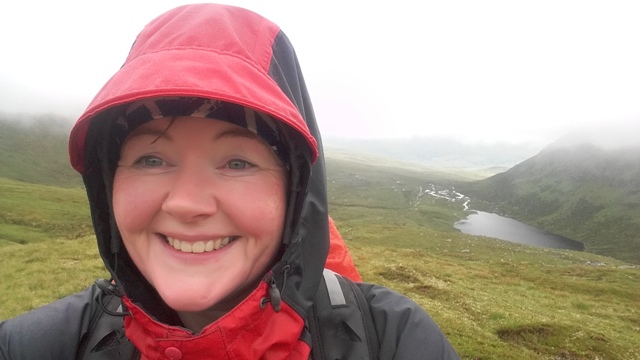 Smiling cos whats behind me ,,,is where im heading

Unfortunately, when I reached it, levels had risen significantly again since the morning. With no point wasting more time, I just headed back off down the pathless east side of the river. This time though, I stayed higher up where the ground was a bit flatter and easier going, still very wet though. I knew it had taken an hour up and visibility was decent now, rain only a light drizzle at times and soon I could see the trees around the high waterfall with the bridge coming in to view a little higher up. Bliss.

Skipped across the decidedly dodgy bridge, complete with broken spars and only 1 handrail. Trotted down the track and back to the car in 1 min under 7 hrs lol. I didn't think it would have taken this long but I lost a lot of time using the pathless east side so all in all, not too bad. Finally on the way down

I could have shouted with joy, in fact,,I think I did, when the car appeared. I could smell the cup of tea waiting for me lol


Changed clothes, kettle on, tea made, just as the two girls came over the track. We had a wee discussion about the day, they had waded thigh deep across the river lol

I offered them a lift down to the car so they could avoid the cycle back,, One was keen, the other wasn't bothered (did I look dodgy?) lol,,we compromised on them asking me to drop off their rucksacks at the car. Sorted.


This was by far, the worst conditions I had walked in on the hills in some time, but, it was day 3 of a productive weekend, with previous days conditions exceeding my expectations, so what the heck. I got these two done, despite their best efforts to wash me off lol

Great stuff and well done under those conditions, but surely the wind was not as bad as the last climb at the Torridon meet? Glad you had some lift in the clouds though. These are the days you think about for a mighty long time after Compleation

Great stuff and well done under those conditions, but surely the wind was not as bad as the last climb at the Torridon meet? Glad you had some lift in the clouds though. These are the days you think about for a mighty long time after Compleation

would defo consider a return trip on a good day lol,,get all 4 done at once