Two weeks in the West Highlands around Midsummer had been booked so I could get on with climbing my remaining Munros: Starting Saturday 18 June; two nights in Corpach, then, with friends, three on Knoydart and three on Skye, and finally six in Lochcarron. I had the Sgurr na Ciche 3 pencilled in for Sunday, but the forecast persuaded me to drive up overnight and do them a day early. So I arrived in Corpach with a spare day ahead.

Sunday's forecast sounded pretty dismal for most of the West Highlands, but perhaps slightly better around Glen Spean and Corrour Station. As Corpach Station was nearly on my doorstep, I got on the 11:21 train. Travelling to Corrour is always enjoyable and the train got there promptly at 12:30. The next train back was due at 15:24, so there was less than three hours to get up and down Leum Uilleim, to avoid waiting for the last train.

The horseshoe-shaped Corbett was in mist as I set off towards it, but it wasn't raining. I went for a clockwise circuit and moved onto Sron an Lagain Ghairbh. Some nice began to unfold as I climbed... Looking south-east from the ascent ...but soon I was up in the cloud. It was a nice ascent up a ridge, quite steep with rocky bits, though. I made it to the big summit cairn in good time, but with not a lot to see. Map and compass led me west to the ATV track, where I turned right, and moved around the misty horseshoe and onto Tom an Eoin. As I moved along An Diollaid, I dropped out of the cloud and some decent views opened up again. Then the rain started. I moved along at a pace, as much to get to the shelter on the station platform as anything. When I reached Corrour, there was over 20 minutes to spare. At least it was a dry 20 plus minutes! As usual, there were a few like-minded people to chat to, also waiting for the train.

For the following few days I joined friends for the Knoydart and Skye trips, then I moved on to Lochcarron. Monday 27 saw a day trip to Inverness, and Tuesday 28 had the Munros finished. I'd originally booked the stay in Lochcarron with a view to climbing the Torridon Munros, but that had been done ahead of schedule. So I brought along some plans for Corbetts in the region. But Wednesday's forecast didn't look good.

Actually, this turned out to be a much more pleasant day than expected, although I felt I'd earned an easy day anyway. So I just had a gentle ramble around the area. I'd left the camera behind, but had my phone. Two of the Corbetts I had in mind were Fuar Tholl and Glamaig, but now they can wait for another time. At least I got some nice views of them on my stroll. Again a 'mixed' forecast, but I decided to drive round to the Torridon Hotel and climb Beinn Damh. The walk started in conditions that were grey, but not too wet, ascending through pleasant woodland. As I left the trees behind, Beinn Damh remained in the cloud... ...but looking behind, some of the higher Torridon mountains looked as if they might clear. However, the mist stuck to Beinn Damh. I reached the bealach, turned left, and was soon clagged in. But a line of cairns led all the way to the summit. The summit of Beinn Damh

As I came back towards the bealach, there were fleeting views. Turning downhill from the bealach, I dropped out of the cloud, with a nice view ahead. The descent, looking towards Torridon

The return to the Hotel car park through the woods was a nice way to finish the walk, before heading back to Lochcarron.

There are some beautiful and spectacular mountain road passes in Great Britain: Llanberis, Hardknott, Newlands, Cairnwell....but the Bealach na Ba, between Kishorn and Applecross, must be a candidate for the very best. It's not as steep as the Lake District passes, but the hairpins seem even sharper. It's not as high as the Cairnwell Pass or the Lecht, but it's much nearer the sea, making you feel way above it. When you get them, the views are superb, both of the nearby sandstone mountains and the islands across the sea.

On this trip, I'd made one Corbett walk from a rail summit, another from near sea level, so why not finish with one form a road summit? On the last full day of my stay, I drove past the head of Loch Kishorn in weather that looked quite promising, and turned to head up the pass. At the car park near the summit, there was a mixture of views and clouds. As I walked up the easy track, the transmitter mast at the head of the first section was in and out of the mist. On reaching the mast, I was clagged in, and I made the turn right towards Sgurr a' Chaorachain. The ground was
quite rough with numerous ups and downs. Views appeared and disappeared; too quickly to catch with the camera. The first Corbett was reached, and I made my way back to the mast. At the mast, rain started, but descending north I came out of the cloud. Even with visibility, care was needed to micro-navigate a way across the mixture of rocks and heather, with slippery conditions. On reaching Bealach nan Arr, I picked up a path leading to Beinn Bhan. Soon a way had to be picked through boulders, and the route to the second Corbett also involved a lot of ups and downs, with an intermittent path.
I reached the trig point with the cloud base just about level with the summit, and no panorama to speak of. Leaving Beinn Bhan's highest point, I soon dropped out of the mist again, with Loch Kishorn visible down on the left. 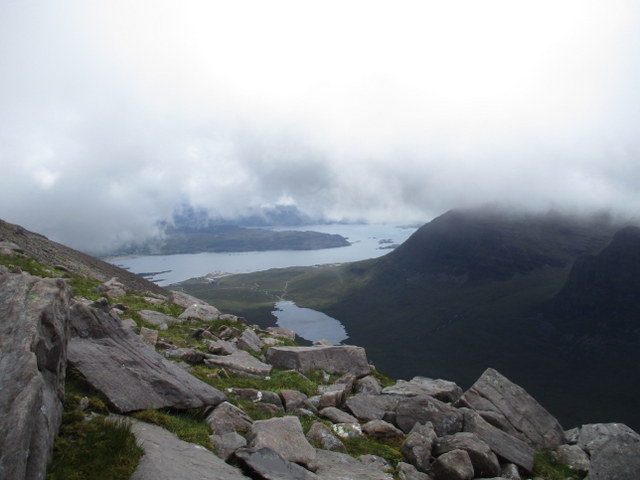 On the way back, the best views of the day opened up. Sgurr a' Chaorachain from between Beinn Bhan and Bealach nan Arr

Picking a way down the ridge through the boulders seemed trickier than on the way up, but in time I was back at Bealach nan Arr. I swung back south and uphill towards the mast Skye mountains from the return towards the mast

Maybe I could have made more of a shortcut back to the car park, but moving back uphill gave me some of the views I'd missed earlier. Looking back to Bealach and Coire nan Arr

After ascending a while, I cut across to regain the track coming down from the mast. A look back at Sgurr a' Chaorachain

I arrived at the car park, which was now quite busy, and drove down to Applecross. The camera had been packed away by the time I made a short stop at the village, but my phone was still handy. Beautiful blue sea and lovely scenery made the longer drive back via Shieldaig worthwhile. I came back to Lochcarron with my Corbett count now into double figures; the second reason within a few days to celebrate! Another couple of drams were in order.

Next day, I went home to Yorkshire after an unforgettable fortnight in Scotland.

Some great corbetts there Simon. Beinn Damh must be awesome when you have the views.. Agree with you on Bealach na Ba - its hard to top in the UK. I have been secretively wanting to cycle that route. Everytime I have been up there en-route to Applecross its been blowing a hoolie.

Aye Applecross always looks cracking, and in those eerie mists - love weather like that

Borderhugh wrote:Some great corbetts there Simon. Beinn Damh must be awesome when you have the views.. Agree with you on Bealach na Ba - its hard to top in the UK. I have been secretively wanting to cycle that route. Everytime I have been up there en-route to Applecross its been blowing a hoolie.

Cheers. I can imagine those hairpins being very interesting to cycle, in either direction.

basscadet wrote:Aye Applecross always looks cracking, and in those eerie mists - love weather like that

Thanks. Weather like that is fine when the forecast threat of thunder doesn't materialise. Fortunately it didn't