A quick bike hike up Gulvain

A quick bike hike up Gulvain


With usual walking chums being away, Michael and I decided to hook up this weekend. As the week progressed, the weather was not impressing us

but we made a plan and headed for a bike hike up Beinn Dearg and Carn a' Chalamain. Meeting at Perth at 8 (bit of a lie in!), weather man Michael had used his extra hour to formulate a new plan - it seemed that the forecast had changed dramatically and west was best; he suggested heading for Gulvain instead as we could use bikes for that, but avoid the heavy rain now forecast for Glen Tilt

We parked at the layby just after the A861 turns off and found a couple of other cars already there; hardly surprising as it was now 10am

We unloaded the bikes, booted up and off we went, soon realising we ought to have checked the map as we were going the wrong way along the road...

always hate the start of walks!! But it didn't matter - the sun was shining and it was awesome to be out 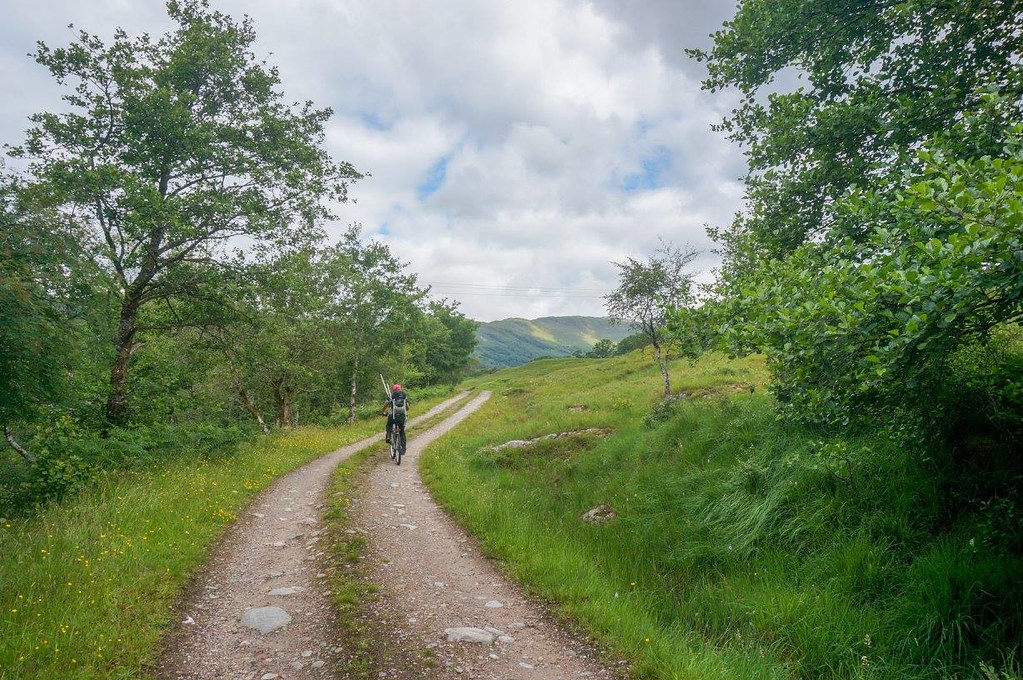 Once on the right track, the cycling was great - the track was pretty bumpy and there were a couple of great hills but we powered on. Michael may have got the better of me here his bike weighed about 10 kilos less

(that's my excuse and I'm sticking to it!) but we had an enjoyable cycle along the Glen. 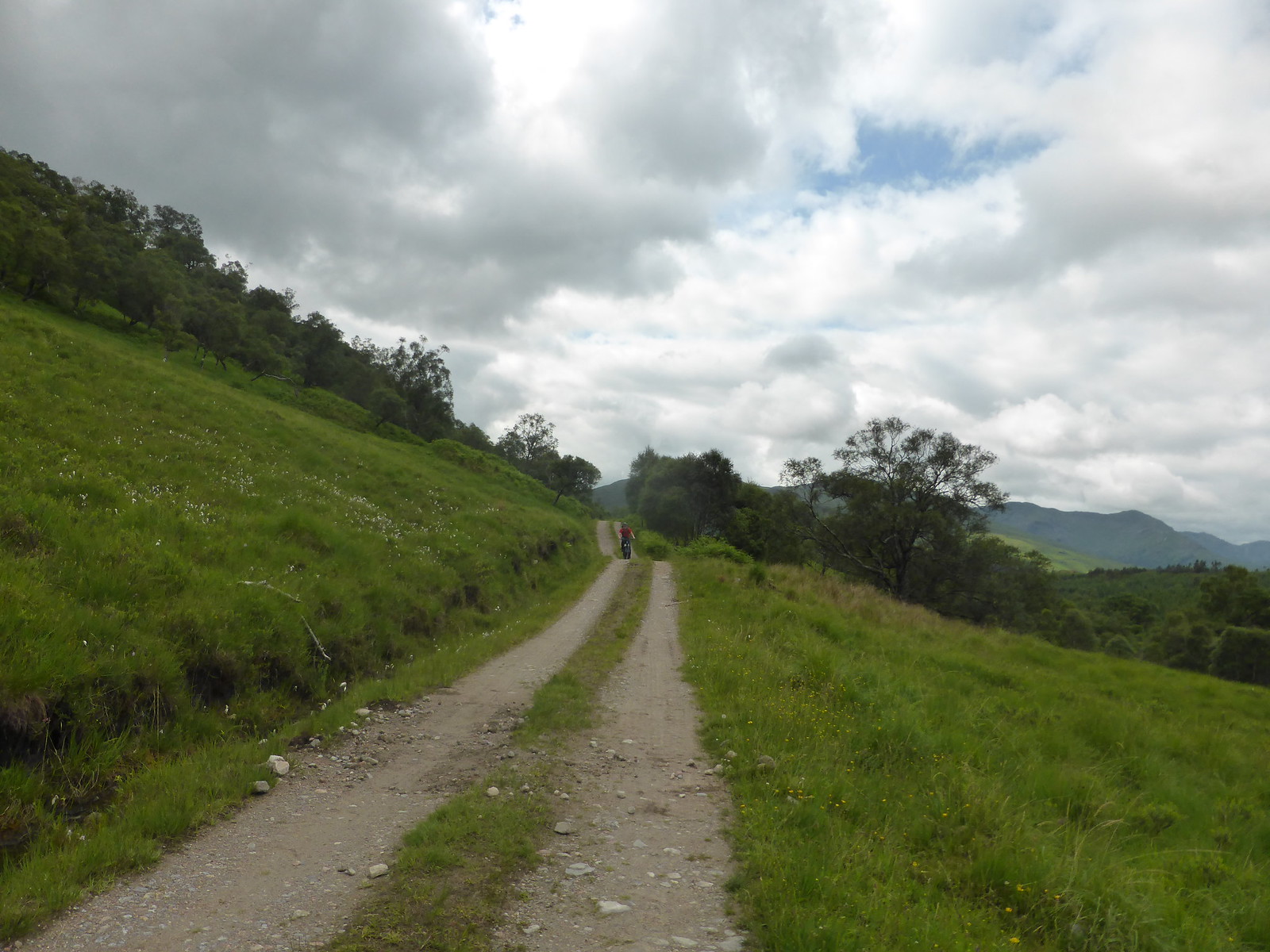 The tables are turned - Jaxter catching up! 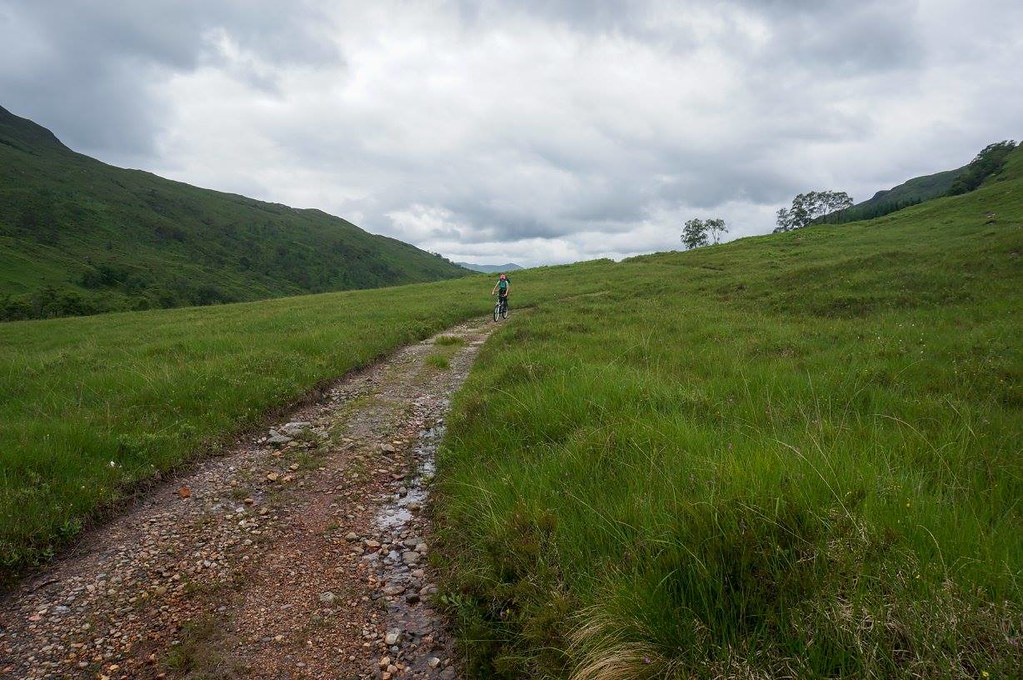 We could see Gulvain itself ahead, there was a bit of clag drifting on and off the top but the path up it was clear to see. 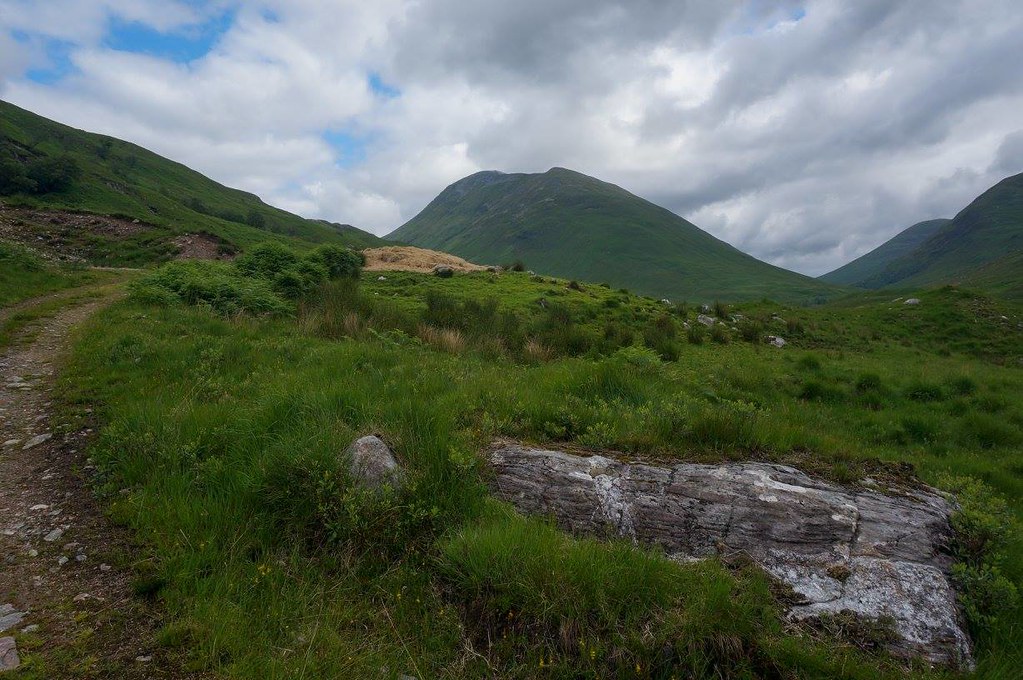 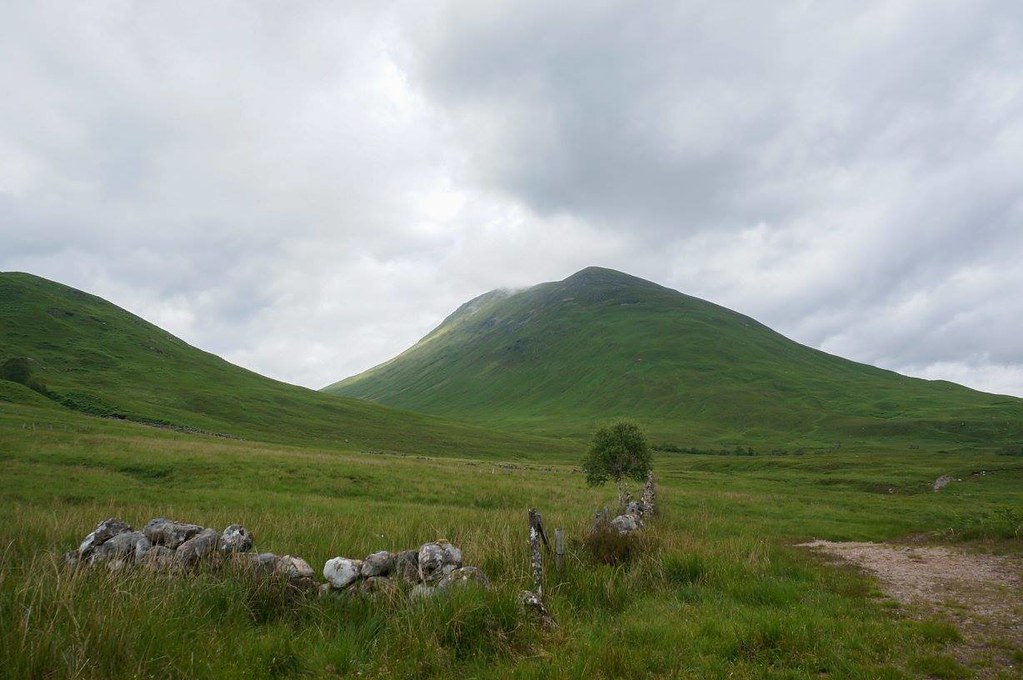 Now almost at the base of Gulvain, we looked for a spot to leave the bikes; we crossed the bridge and here the path turned to mush. 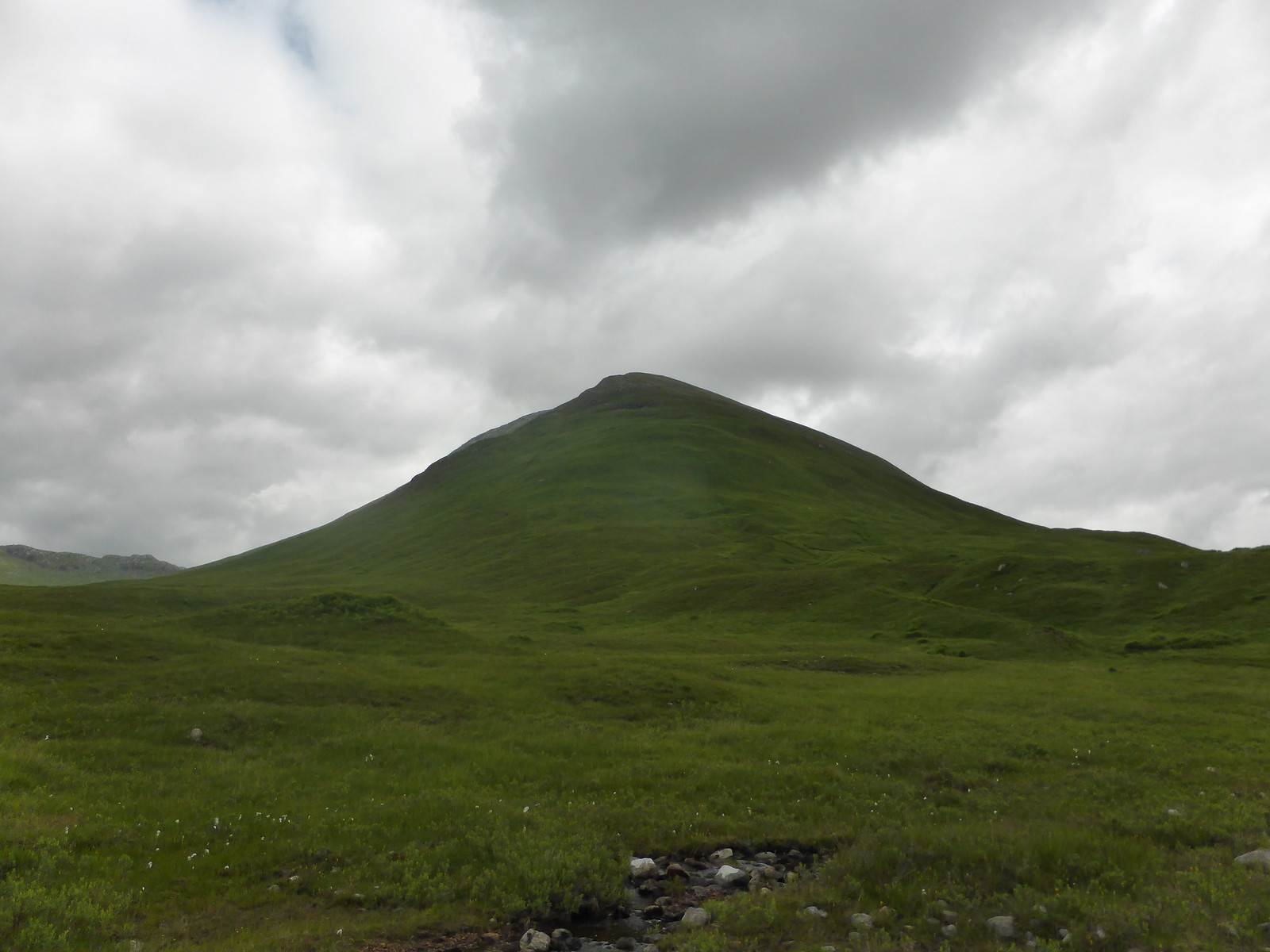 Dumping the bikes behind a grassy lump, we got poles out and continued on foot. A minute or so later, I heard an exclamation from behind me - Michael had decided he needed extra head protection when climbing this mountain and was still wearing his helmet...

Running back to leave the helmet... 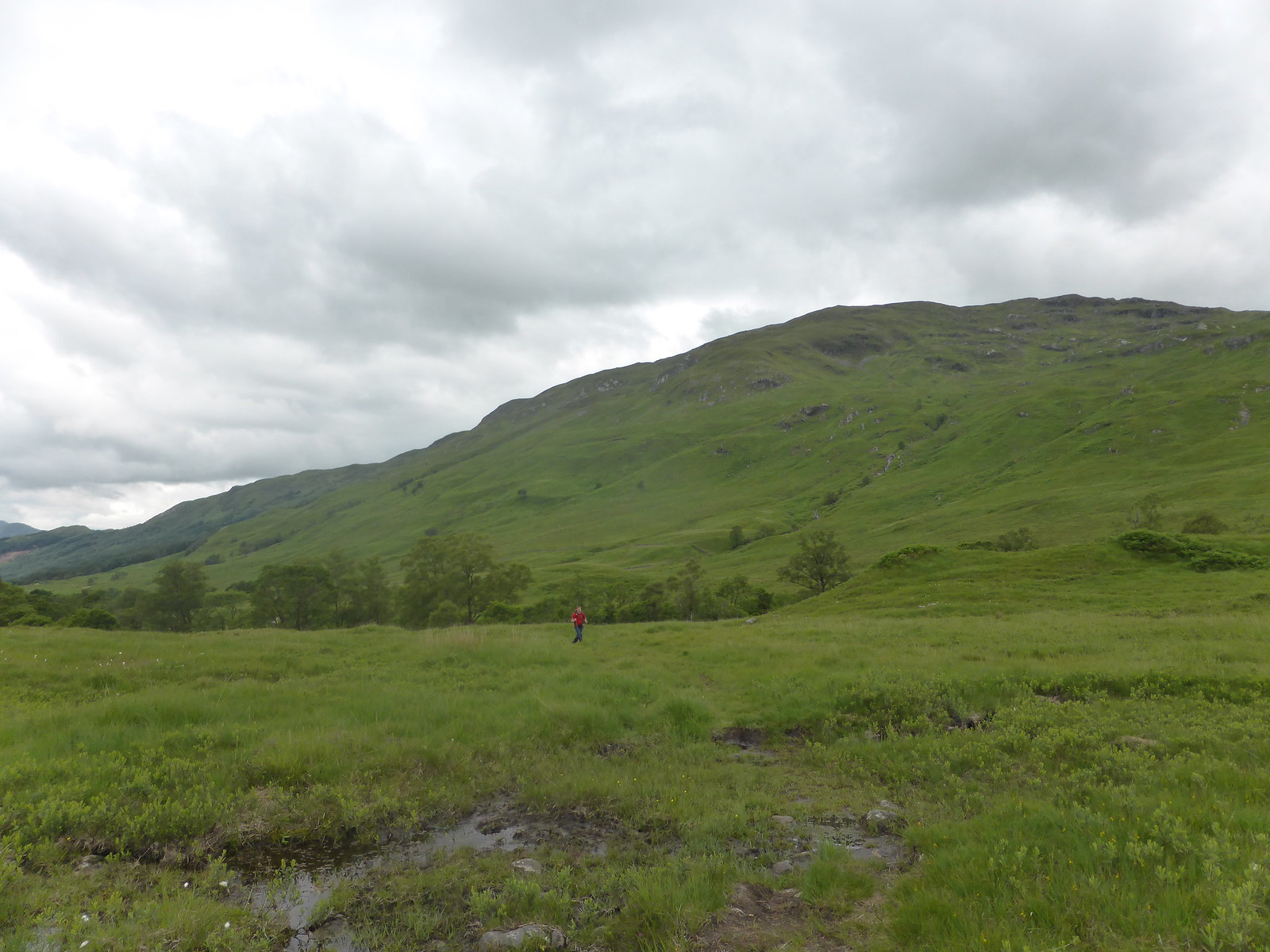 After he had run back to leave it with the bikes, we continued! The path was initially gradual, but soon steepened out into zig zags before becoming more brutal. We were both dripping with sweat as there wasn't a breath of wind and it was really muggy. Unfortunately these conditions were also perfect for midges, and there were a few of the wee beasties around. 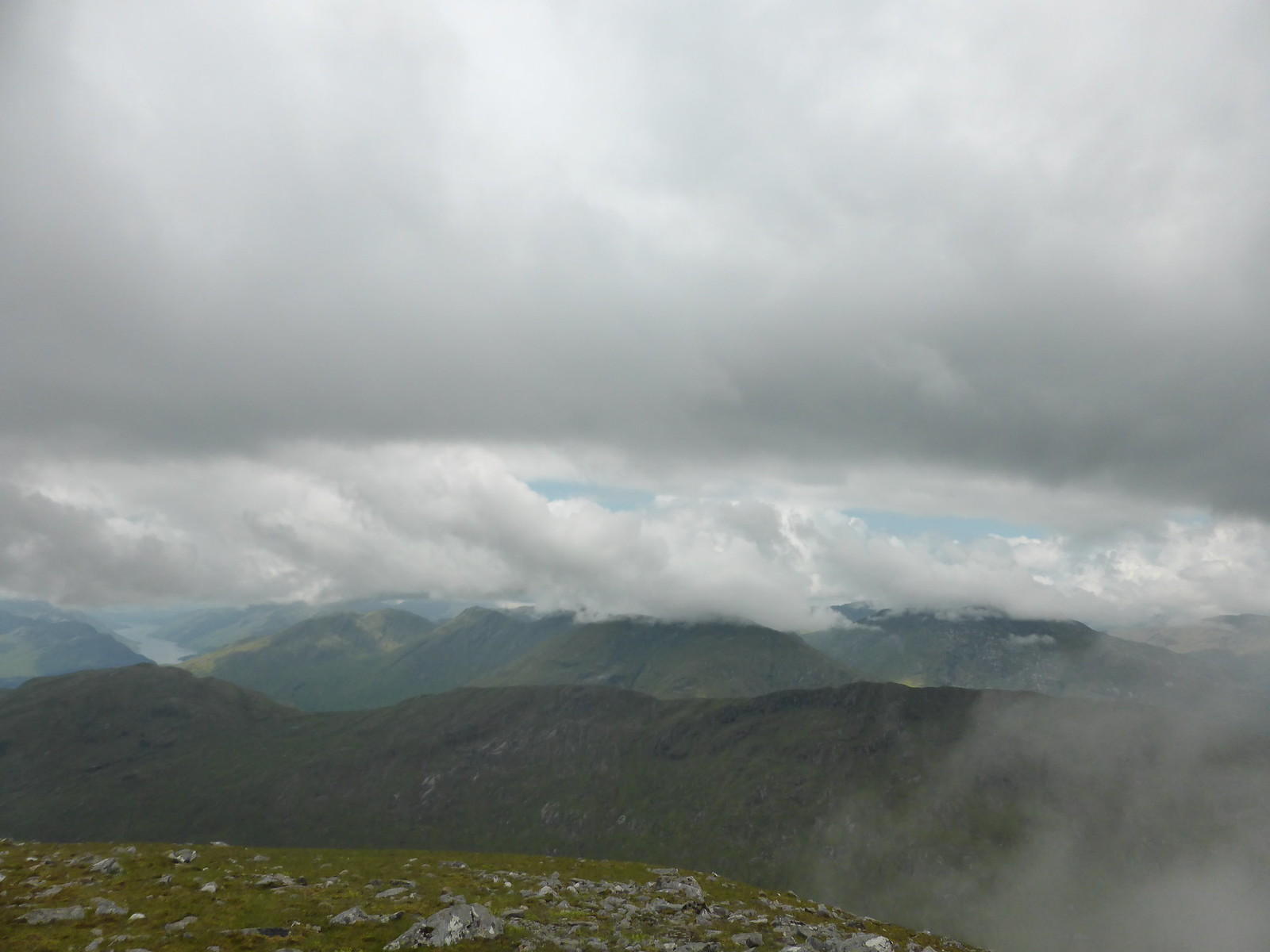 Lovely view down to Loch Morar 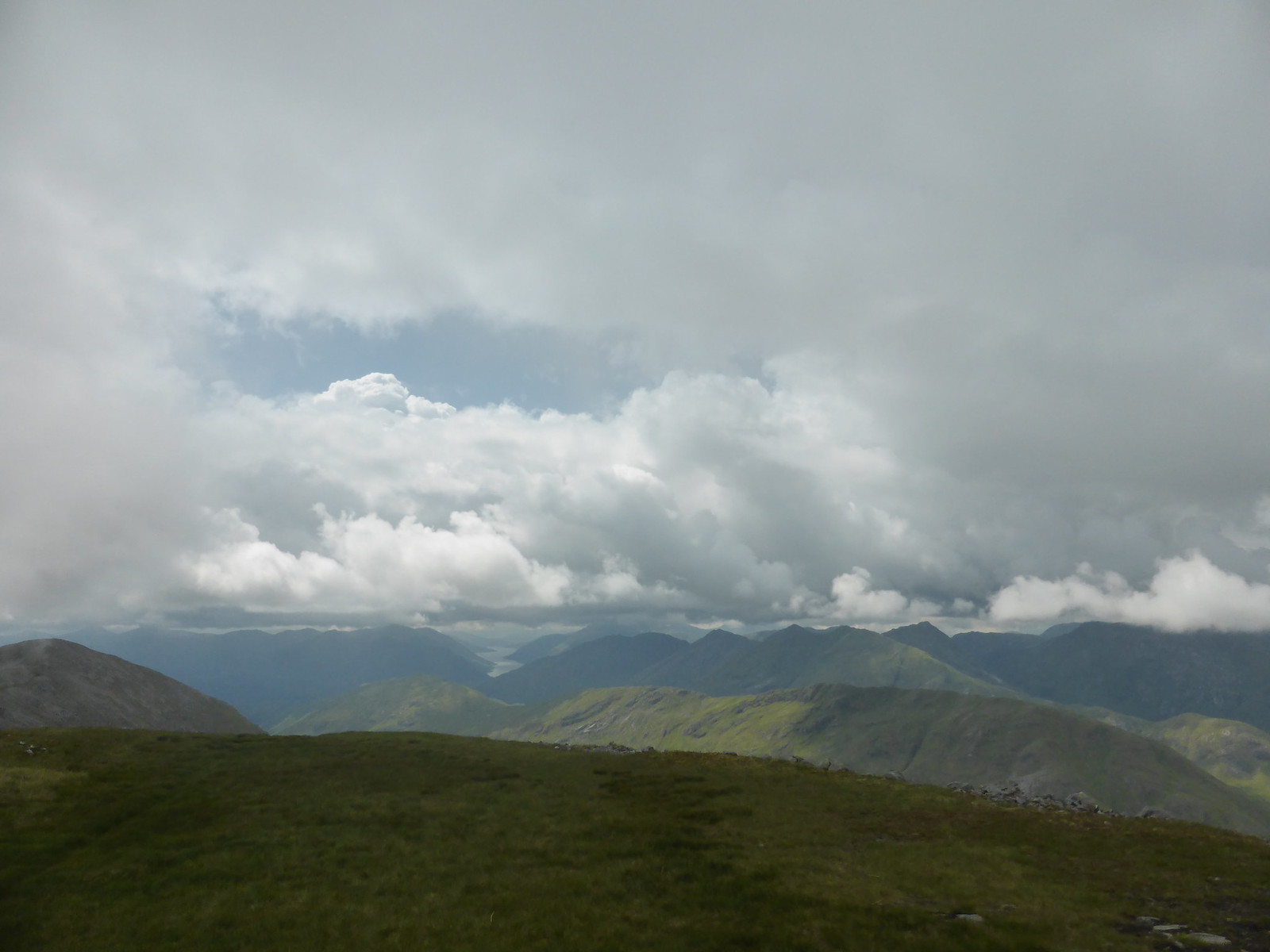 As we approached the top, the terrain started to flatten out and a very welcome slight breeze appeared. As the ground became rockier, we came out on the first summit to a very phallic looking cairn! We could see the ridge ahead of us, although the true summit clagged in as we set off

A cheeky wee pose as the clag comes in 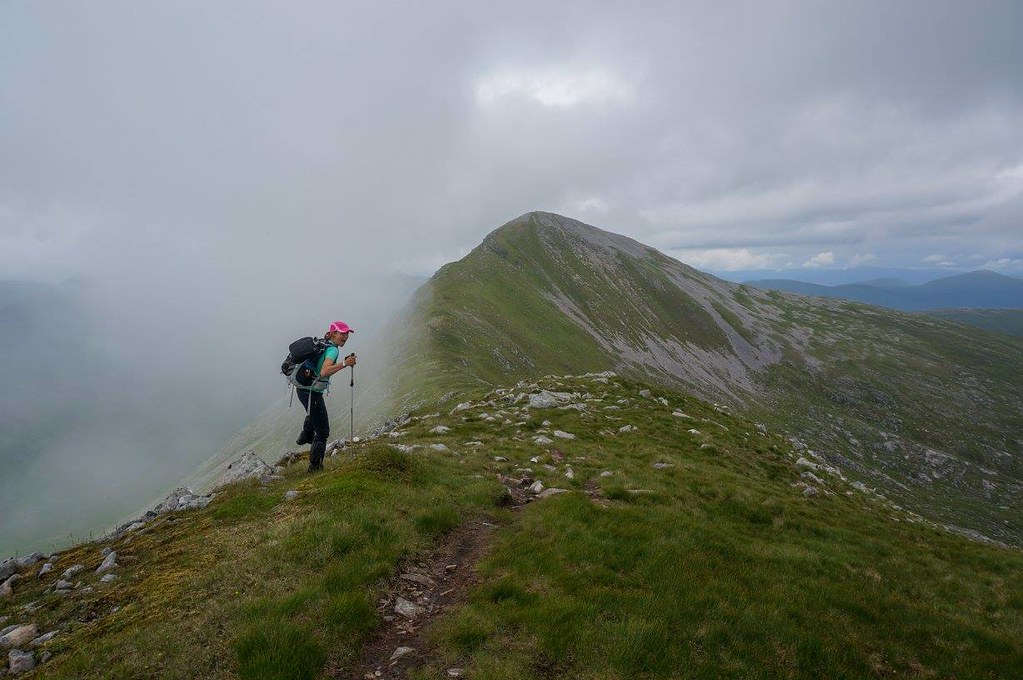 Hoping that it would clear before we arrived, we set off. As we started the descent to the ridge, I felt a twinge in my knee, a niggle that had been plaguing me the day before had returned. Knocking back a couple of ibuprofen and assuming everything was OK, we continued on.

Once the brief steep descent was out the way, the ridge itself was a joy. On cue, the clag cleared as we approached the summit and we were greeted by some excellent views. We were trying to work out what everything was from this angle - this isn't an area I know well but there was one very distinctive shape that no-one could miss - and it was clear!!

Big Ben clear for its once a month airing 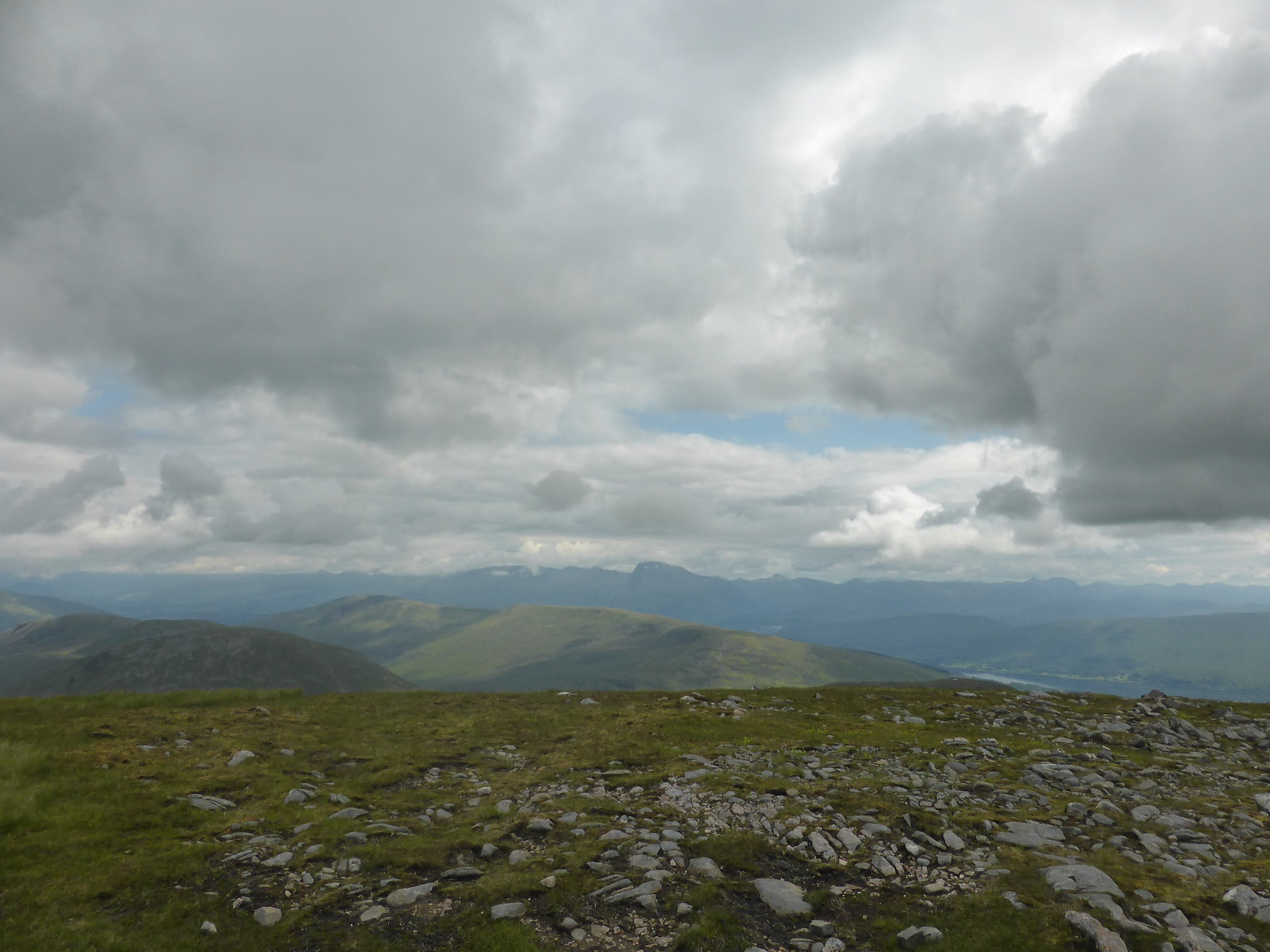 The Glenfinnan hills and Loch Morar 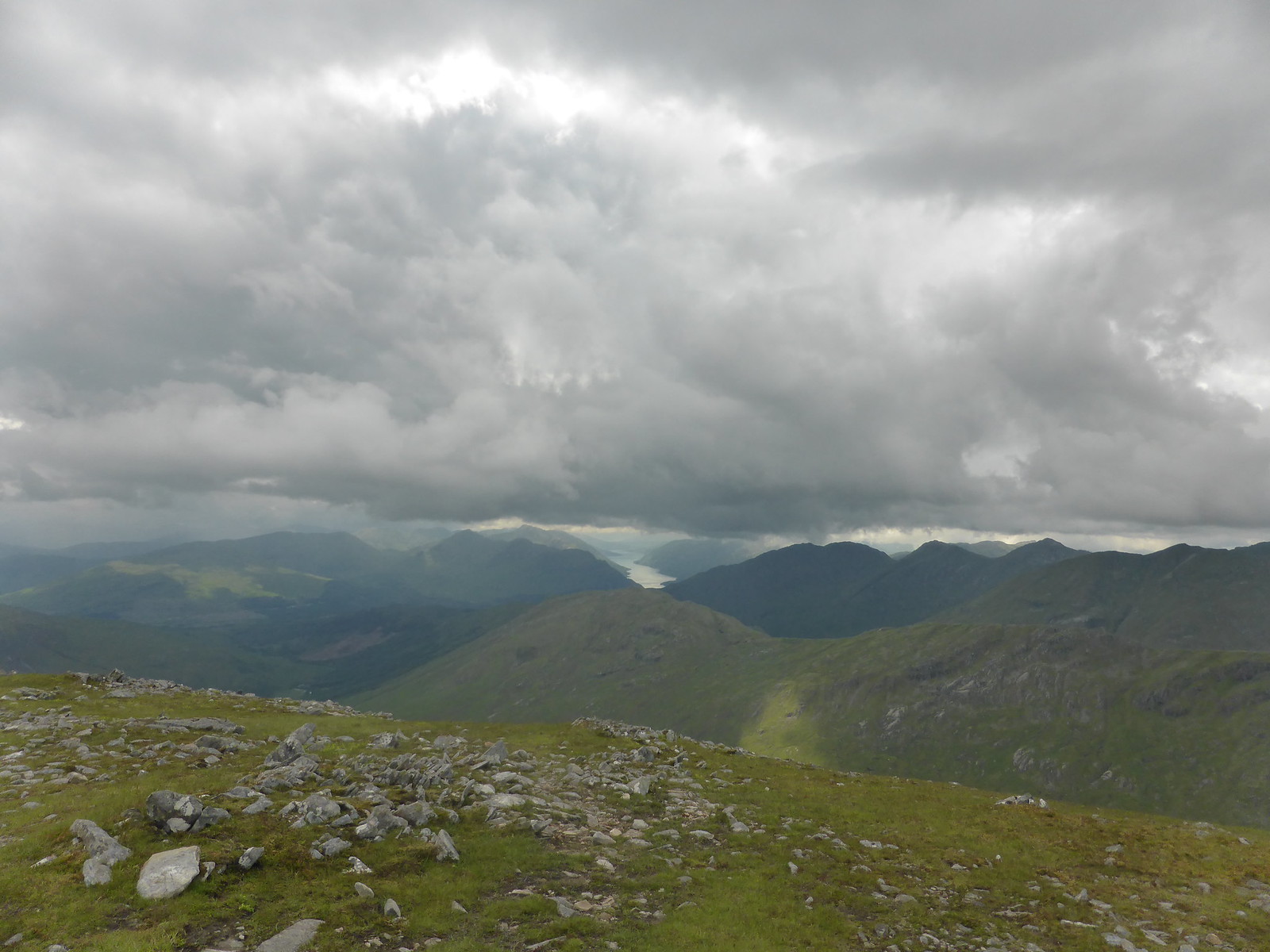 The traditional shots were also taken.... 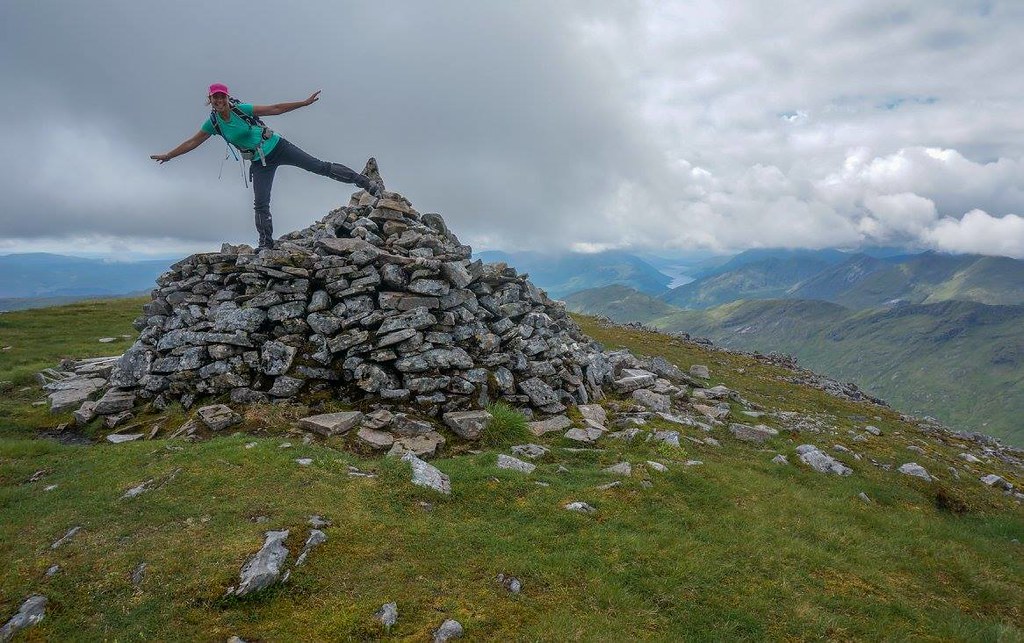 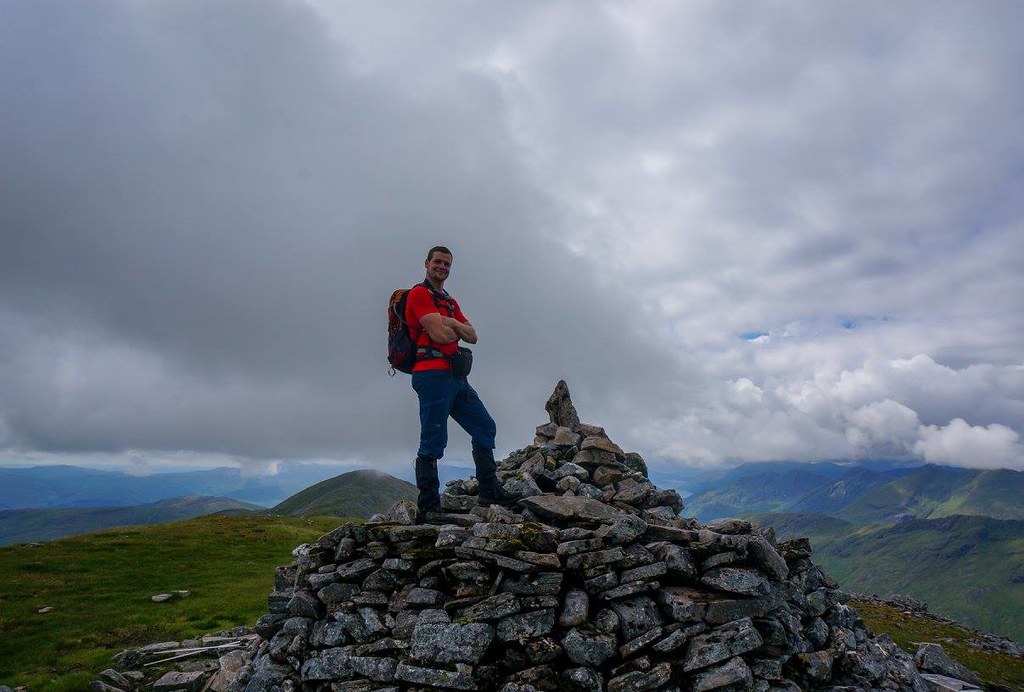 And we settled down to eat some food as it was most definitely lunchtime. According to Michael's tracker app it had taken up 2 hours 40 to this point - not a bad effort for a wee Saturday stroll

After a nice leisurely break, we decided to leave the summit of Gulvain to the midges and head back. Everything was even clearer now and the ridge looked awesome 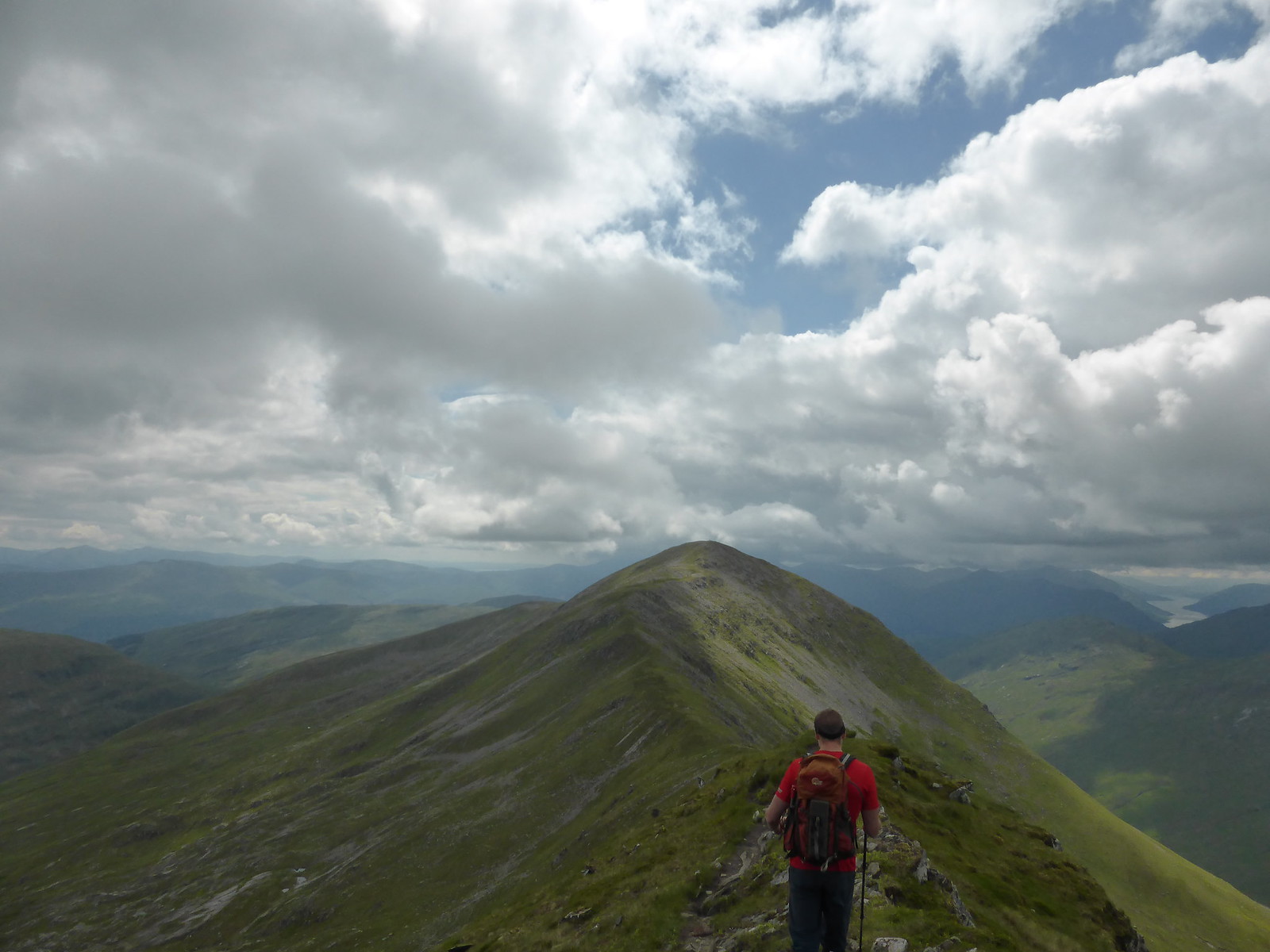 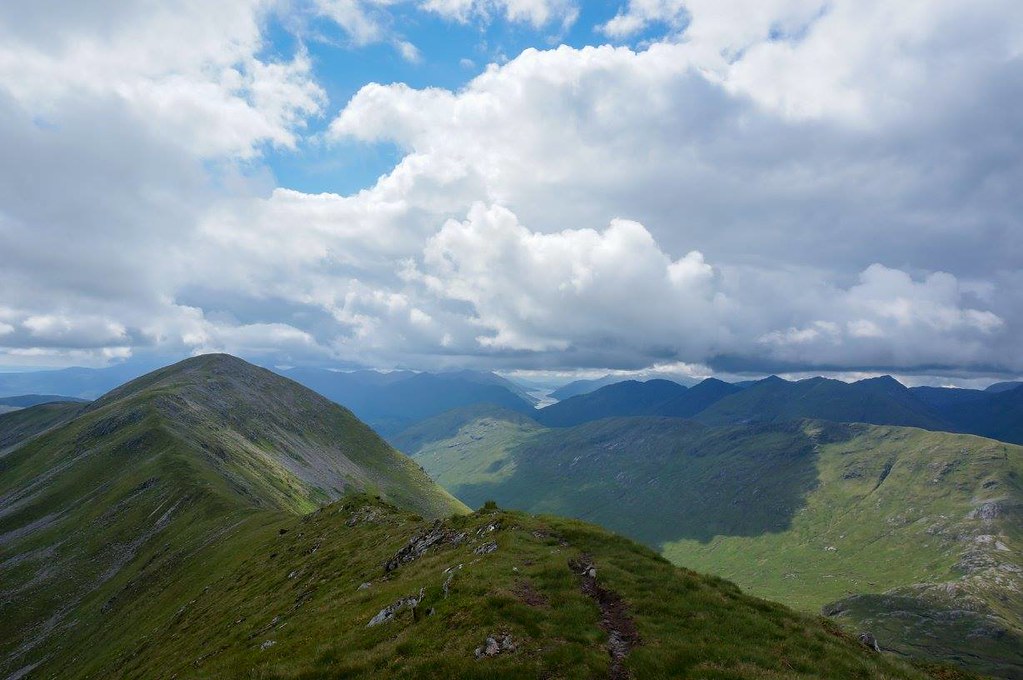 Unfortunately on way across the ridge Michael got over-excited and threw his camera across the mountain. Apparently this wasn't deliberate and it didn't sound very happy afterwards....This was the last photo it ever took....RIP camera 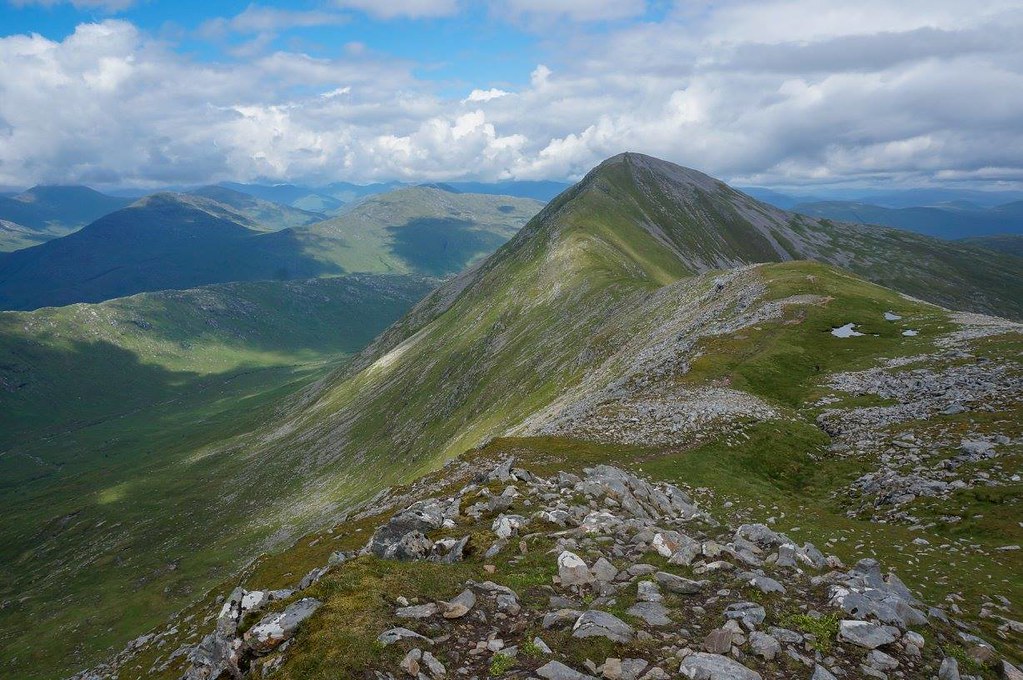 Around here we met a group of folk heading up and they were feeling very envious of our bikes - the walk in must have taken ages! As we reached the wee summit the sun came out and everything looked even better - we had definitely made the right decision today

Looking back along the ridge to the true summit, the phallic trig taking centre stage 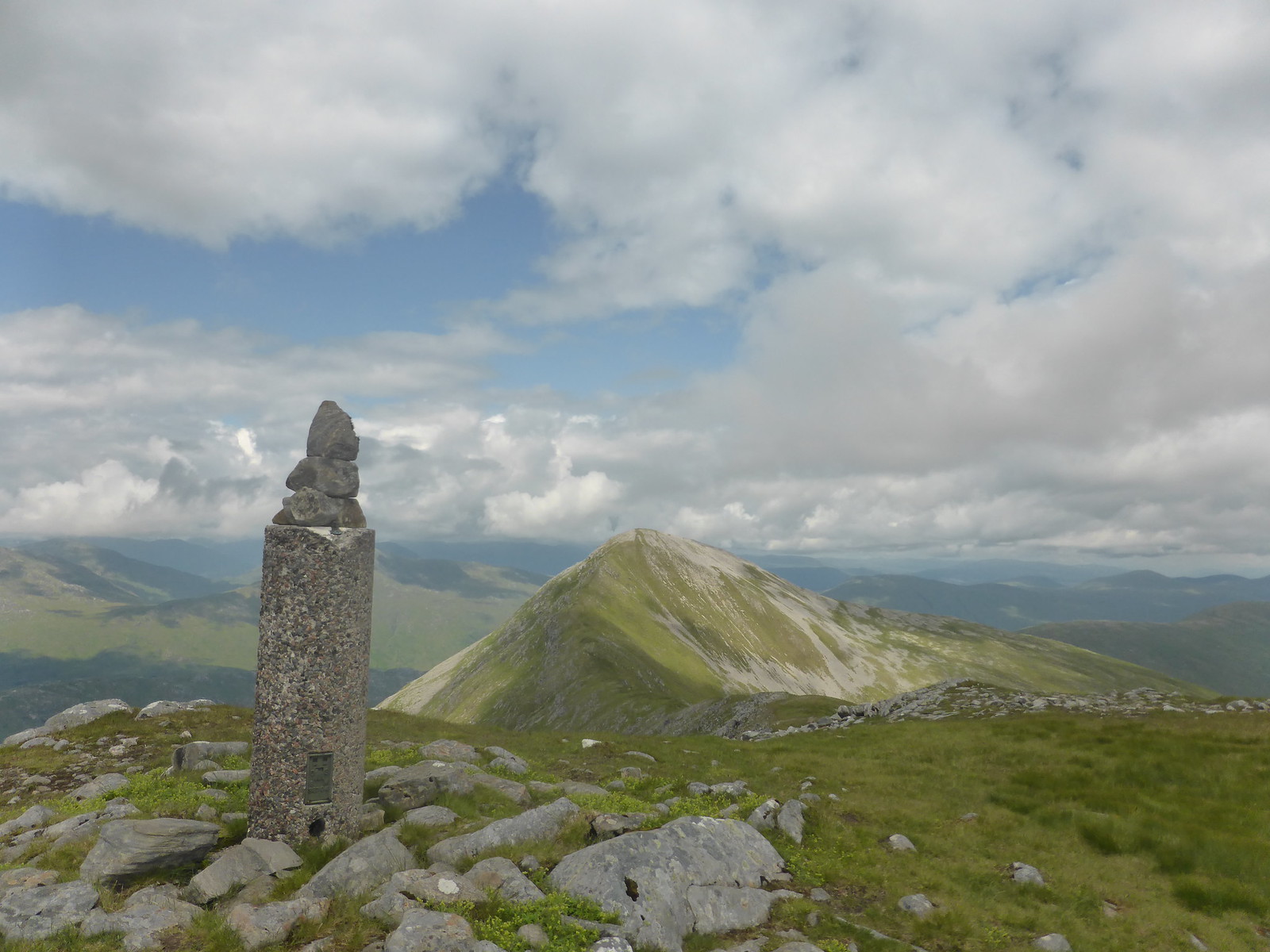 The distance back to the bikes wasn't far from here, which meant it was going to be horribly steep. Off we went, and as we started the downhill, my knee announced itself in an unpleasant fashion....so it turned out it wasn't something I could walk aff...

This section was a bit of a trial - fortunately it was well pathed and I was able to take my time but my knee was pretty painful. However, the weather was still good, there were excellent views to be enjoyed and Michael was wonderfully patient going at my "injured pace" 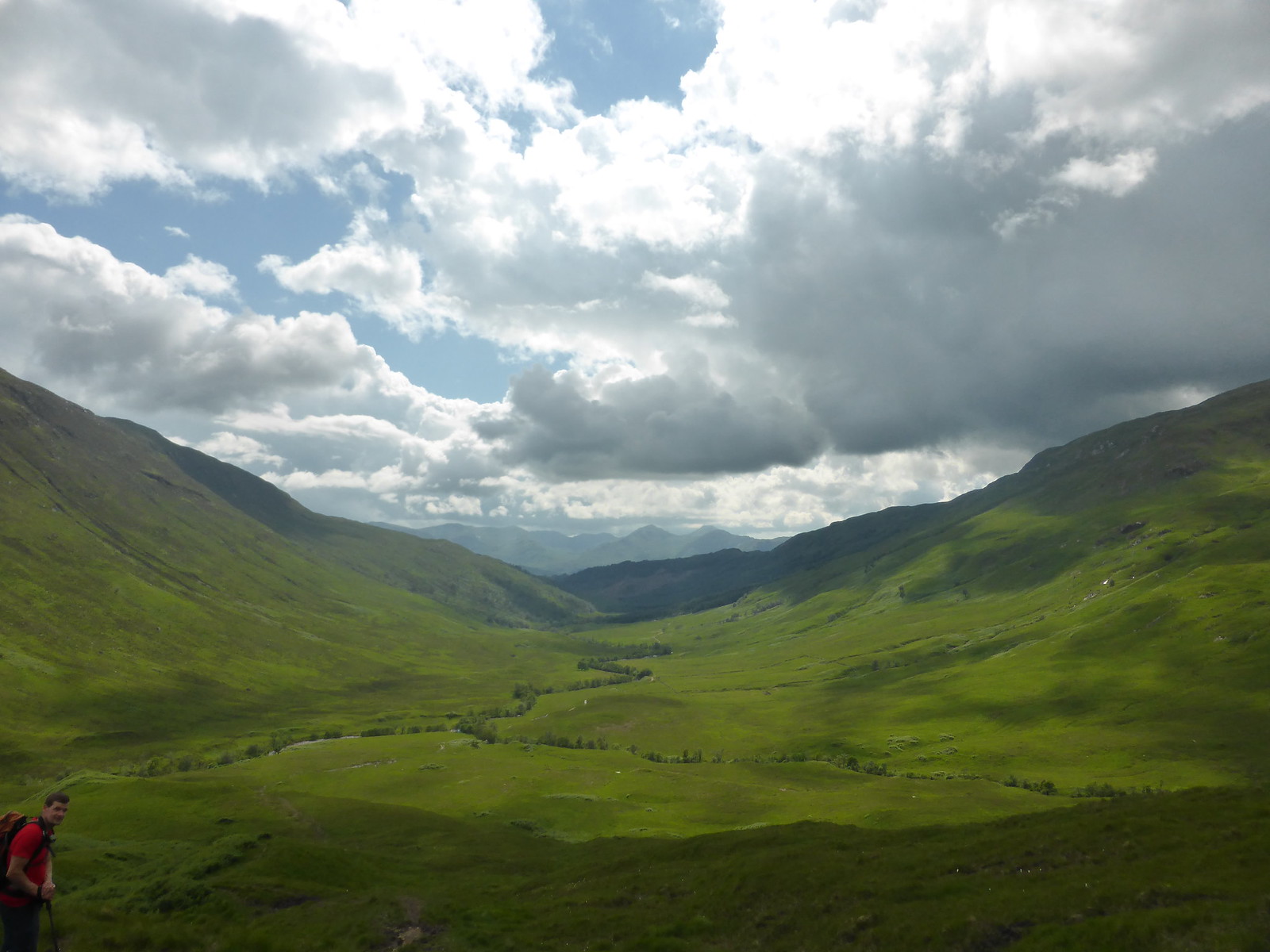 It was a huge relief to be finally on flatter ground and then back at the bikes. Michael was super happy to have his helmet back on, he'd really missed it up on the summit....

and we headed off along the long track.

Back at the bikes, menacing clouds ahead 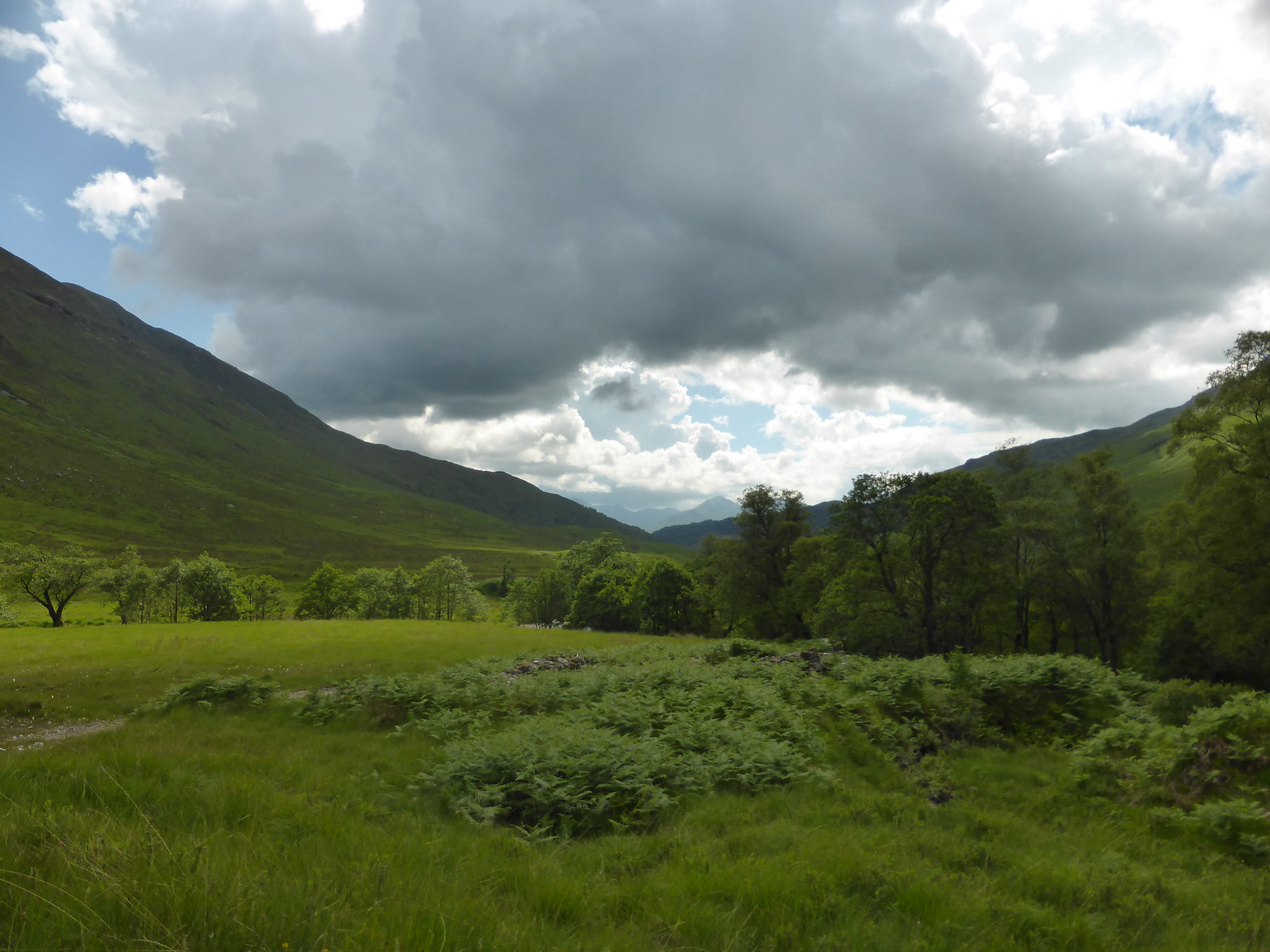 Fortunately my knee seemed to have no problems with cycling so we had a very enjoyable cycle out - it threatened to rain at one point, even daring to start spotting but we ignored it and it stopped (if only that were possible with everything I don't like

Eventually arriving back at the car in glorious sunshine, out came the app which told us 5 hours 45 minutes - a nice wee workout! We loaded the bikes onto the car - I stood and watched

and headed for somewhere that sold Irn Bru and icecream

Half an hour doon the road we were nearly at Spean Bridge and Michael realised he had left his phone on the car parked next to us at the layby...

so back we went, hoping that the owner of the car hadn't left and also that the phone really was fully waterproof as it was now raining torrentially....

Fortunately everything worked out OK, but I don't think Michael will ever put his phone down again

Looks like a mountain with a superb ridge in a great location!

Hope your knee gets better. Have a great day on saturday

Fine wee report of a good day out JB

. Glad you managed to fit in all the misfortunes

A nice ridge walk, and it sounded like a good last minute change of plan. But I thought going wrong at the start was something we only did down here in England

I hope your knee gets better soon.

Nice one, looks like the weather improved as the day went on.

Didn't realise you did short outings like this one

MikeSouter wrote:Fine wee report of a good day out JB

. Glad you managed to fit in all the misfortunes

It was a great day...the misfortunes make it even more memorable

simon-b wrote:A nice ridge walk, and it sounded like a good last minute change of plan. But I thought going wrong at the start was something we only did down here in England

I hope your knee gets better soon.

Ah the start is always the hardest bit

Happy to admit to my mistakes

Thanks - I think it may finally be on the mend

Gordie12 wrote:Nice one, looks like the weather improved as the day went on.

Didn't realise you did short outings like this one

Cheers - save the biggies for the best weather days

Thanks, enjoyed reading that and some lovely and fun pics. I'm planning on using my bike for the approach to Gulvain as well and your report is very helpful for this.

Great report - definitely one for the bike for me