An Dun and Creag an Loch

An Dun and Creag an Loch


I often begin my walk reports by commenting on how I have been looking forward to a walk. Many are planned years in advance, queued up til the day I fit them into my schedule. I had been drawn to the photographs I had seen of An Dun and its appearance on the map, with its steep sides and summit plateau. The prospect of a lochside camp further added to its appeal.

​I initially parked in the small layby immediately south of the start of the track to the Gaick Pass, but I felt that my car was a bit conspicuous parked on the A9 for two nights, so I continued south before doing a U-turn at the end of the dual carriageway and heading for the Trinafour turning. I drove a short way down the old A9 which is no longer a through road. Parking short of the bike sign, I felt that I would not be obstructing anyone. While sorting out my kit, a large lorry came hurtling down past me at a speed more appropriate to the new A9.

Still recovering from a virus, I was not feeling very energetic and pushed my bike up the steeper uphill sections. It was nice to clear the trees and see the hills ahead. An Dun and Creag an Loch are just visible over the hillside to the right. 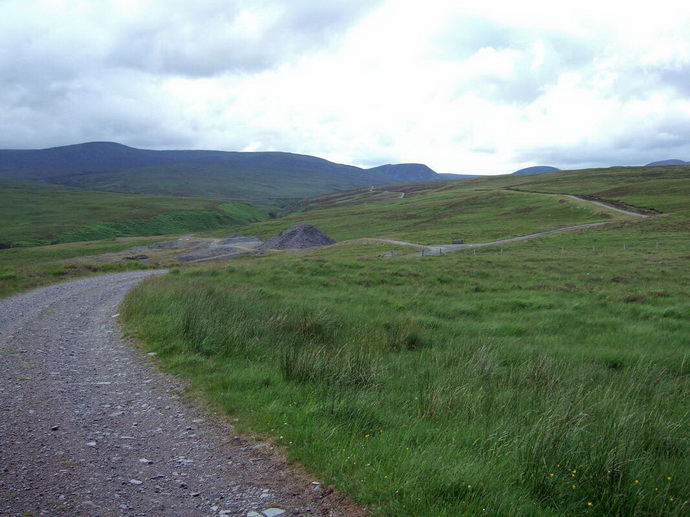 After about 5km, this derelict cottage is reached. I believe that on the OS map, it is named Badnambiast. I always look at these buildings as potential bothies. This one would require new timbers and windows but the walls and chimney stacks look in good condition. It has the potential to make a fine bothy with a nice outlook. At present, it just seems to be used as a place to store timber and the like. It is sad to see it fall into an increasingly derelict state. 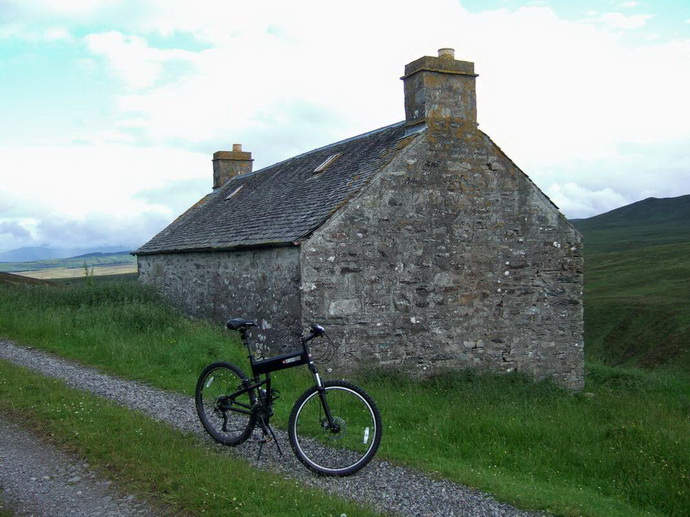 The track crosses the Edendon Water twice with a middle bridge crossing a tributary. The photograph below it at the first bridge with An Dun to the right. 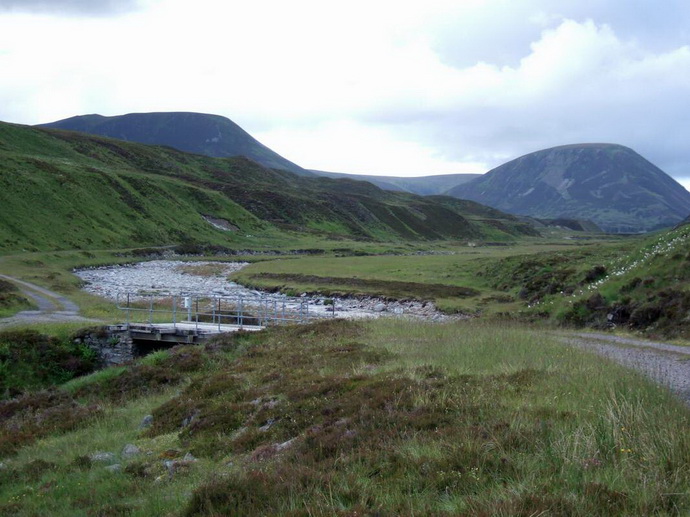 The third bridge was more of a ford. The pipe through which the river should flow must have become blocked and water flowed over the top. Looking on the internet there are photographs of people walking across a dry bridge, but I needed to put on my gaiters to ensure dry feet. The concrete is not very pretty so the "bridge" as seen below makes for a much better photograph. 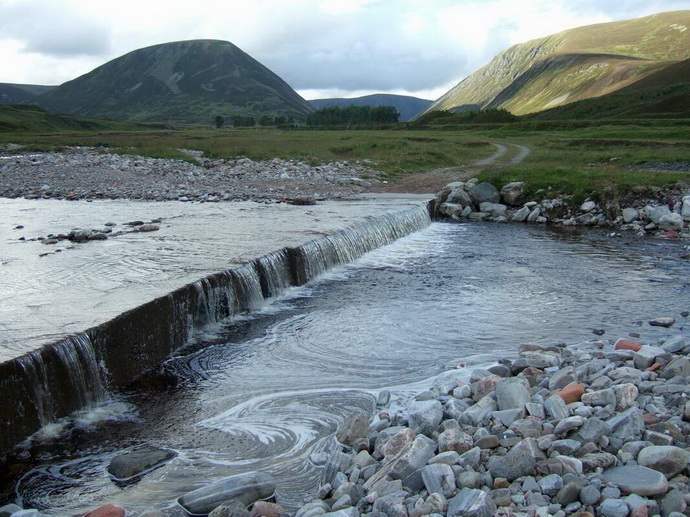 Sronphadruig Lodge seems to have been abandoned to the gradual decay by the elements. This is rather sad, but I suppose it is too expensive to maintain. There is a smaller building that looks well maintained and presumably used as a locked estate bothy. The KEEP OUT signs are clear enough. This did not concern me as I was looking forward to a couple of nights camping at the southern end of Loch an Duin. 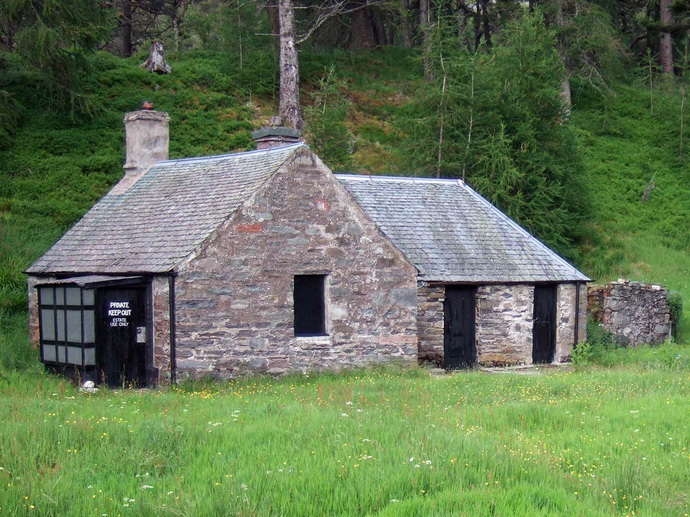 I did consider camping near to the lodge as there was a lot of good flat pasture but continued with my original plan of camping at the end of the loch, though it necessitated crossing boggy ground and pitching the tent at the best compromise between rocky ground and squelchy moss. It rained a lot overnight, but I was warm and dry. I was in fact much happier than my appearance here would suggest. The showers had stopped for breakfast and there was only to be very light showers during my walk, heavier showers returning only after I had returned and eaten, the pitter-patter of rain on the tent being conducive to a peaceful afternoon kip. 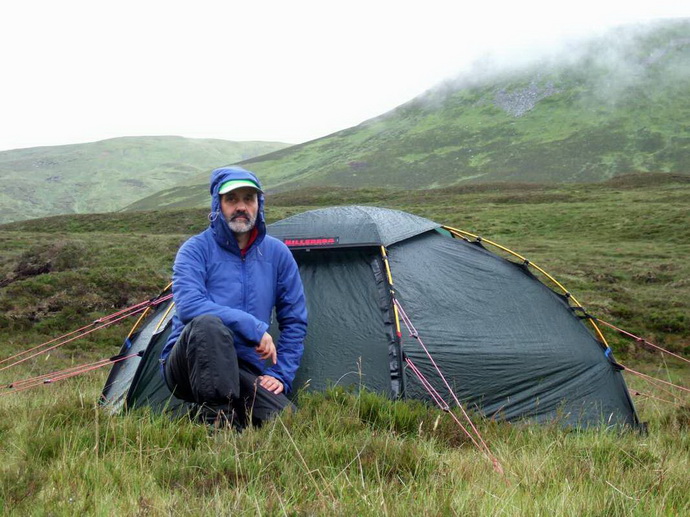 The route details at the top of the report are from the tent only. The route in from the A9 is clear and the same for everyone. I have not included the bike in on the map, just the route covered on 4th July.

Low down on the ridge up An Dun, there were a number of orchids. I am no expert and I know that orchids can be difficult to identify due to variation within species and hybridisation between species. However, I believe this to be a Common Spotted Orchid Dactylorhiza fuchsii. 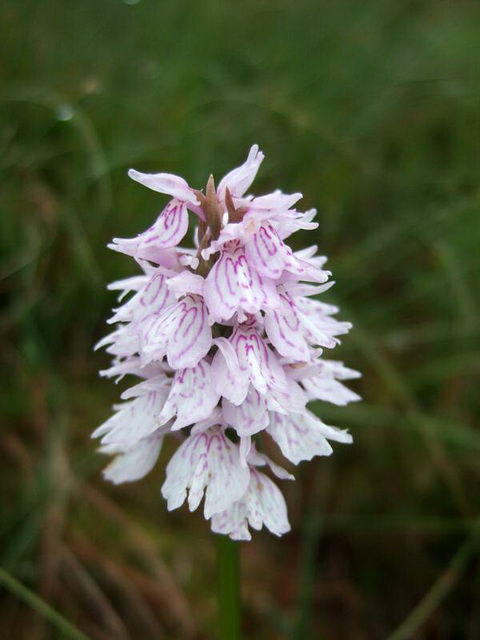 Some way up the ridge, this path crossed on an upwards diagonal. I thought that it might just head round the hillside and disappear, but it continued all the way to the summit plateau, making the going just a little easier. I had strained something in my back some days earlier so anything that made the route up less of a slog was most welcome.

Looking back down the ridge, my tent appeared to be no more than a large boulder on the villus-shaped peninsula projecting into the loch. 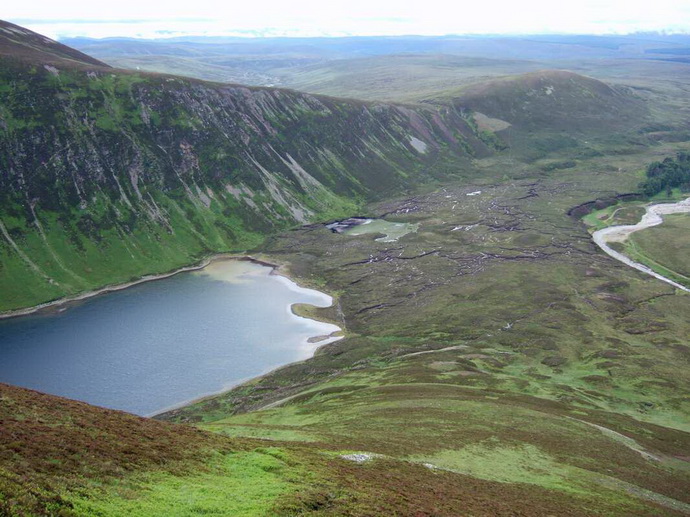 Turning uphill again, I could see my welcoming committee waiting at the edge of the plateau, apparently not very impressed by my slow progress.

There are two summit cairns, this larger one at the southern end and a smaller one at the northern end. One should not draw conclusions regarding the actual summit of a hill from the size of cairns, as shown across the glen where the summit of Mal Creag an Loch is marked by a small cairn while a much larger cairn is to be found 500 metres to the south. Using Memory-Map 25 000 scale suggests that the northern cairn is at 827m while that to the south is only 826m suggesting that the cairn I'm sat on below is not the highest point, though it approximates to the map coordinates given in "THE CORBETTS AND OTHER SCOTTISH HILLS". My 50 000 paper map only gives a spot height (827m) at the northern end. 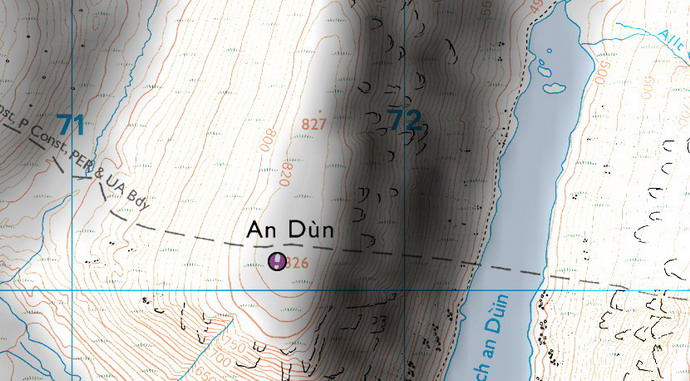 Bing Maps, presumably more up-to-date OS maps shows both spot heights as being the same. There cannot be much in it so I advise dedicated baggers to visit both, which those traversing the hill will do anyway. It was largely overcast but at least I could see the tops of most of the other hills. Looking across Loch an Duin to Maol Creag an Loch, I wondered whether the water was shallow enough to paddle across to the two islands as the ground looked like they might provide some decent camping pitches. The north ridge down to the Gaick pass provided pleasant walking and at the bottom, I picked up tyre tracks across the pleasant green pastures, fording the river and leading to the Landrover track that heads out this way from Glen Tromie to the north. 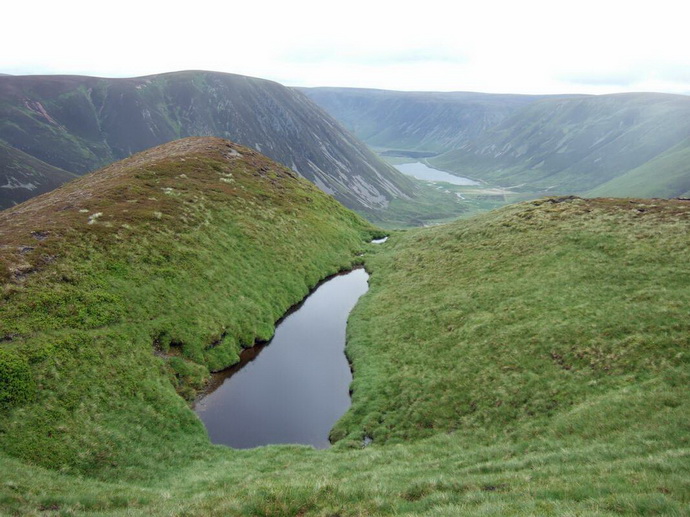 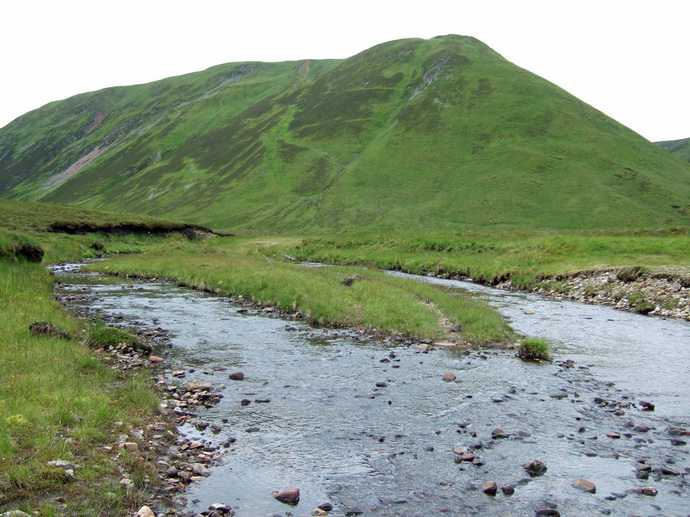 I started my ascent of Creag an Loch up a rocky strip that hid the burn beneath, before heading up a ridge to the right. Higher up, this lead to an interesting little ridge that contoured around the side of the hill for a while before leading to gentler slopes to the small summit cairn. Heading south, I stopped for a selfie at the larger cairn that does not mark the summit, being at least 15 metres lower than the summit. Heading down the south ridge, I looked across to An Dun which looked like an emerald compared to the other surrounding hills.It must be the Munro, Carn na Caim, in the distance. I think the smaller An Dun is the finer hill, with its steep sides, it is indeed something of a jewel among relatively uninteresting hills. 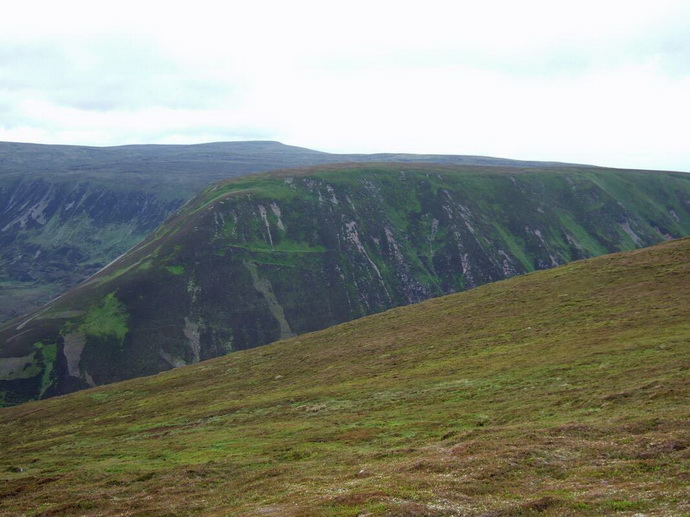 I thought about dropping directly down to Sronphadruig Lodge and joining the track but an indistinct path seemed to drop towards the head of Loch an Duin so I followed this as the most direct route back to my tent.

I sat in the light rain and cooked Uncle Ben's Spicy Pilau Rice with Mackerel Fillets in Sunflower Oil. I would usually drain the oil, but on this occasion, I threw the lot in. The rice only needs to be simmered for a couple of minutes. Though it is a little heavier than dried rice, the fact that it is so quick and easy to cook, using up very little gas, makes it a great option when camping in the wilds. I enjoyed a lovely afternoon nap before re-emerging from my tent, to find much brighter weather. As you can see from these photographs, the breeze had dropped so the loch looked more mirror-like. There was an abundance of these yellow flowers at the water's edge. My research has led me to believe they are the flowers of Ranunculus flammula or Lesser Spearwort. After a good night's sleep ( I occasionally stirred to hear rain tapping on the tent) I woke up early and was up by 0600 and having eaten my porridge, I packed my kit and was away by 0700. I enjoyed the bike ride back out past the derelict cottage with a fine view across to the cloud capped Schiehallion.

Arriving back at the car, I was struck by the number of wild flowers in the verge of the old A9.
Dactylorhiza purpurella Northern Marsh Orchid 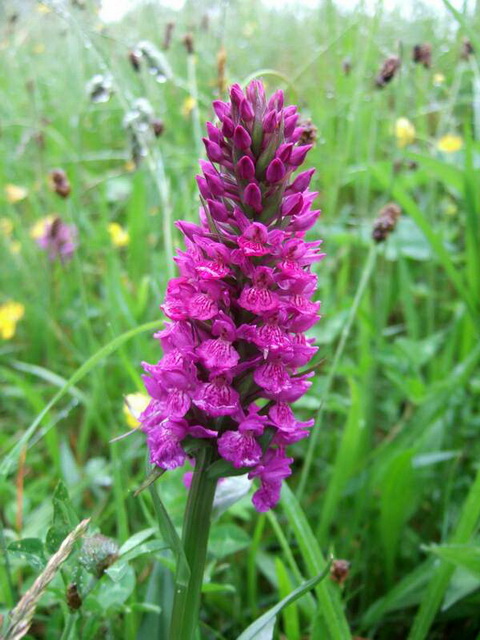 After a second breakfast at the Pitlochry Boating Station, I headed for Meall Tairneachan and Farragon Hill. Driving home afterwards, taking General Wade's Millitary road from Trinafour to Dalnacardoch Lodge, I could see Vinegar Hill (Am Meadar), An Dun and Creag an Loch ahead. The weather had turned bright and sunny and it was absolutely wonderful to take one last look at these hills before returning home.

Users browsing this forum: Mates, Owen b and 69 guests