June 2016 was nice by Scottish standards. Of course, July then must be c**p so there is balance

What can you do on a showery weekend, with heavy rain passing over you every hour, when cloud obstructs views and wind blows you off your feet?
I know what I do on such days - I climb Grahams

Honestly, weather was too unsettled to plan anything long and demanding, so we chose to do a lower hill, where we stood some chance to see views. Rather than drive 3 hrs to the nearest easier Munro, we picked a local hill, a rather unknown Graham called Carn a'Choin Deirg.
Theoretically, this is a prefect, shorter walk for autumn/winter time, but because this hill is in the middle of Alladale estate, it should be avoided during stalking season. We have done the neighbouring Corbett, Carn Chuinneag, twice already and we knew the starting point was at the end of public road in Glen Strathcarron, near Glencalvie Lodge:

Track_CARN A CHOIN DEIRG 03-07-16.gpx Open full screen  NB: Walkhighlands is not responsible for the accuracy of gpx files in users posts
The first 4km are easy, on a good track: Weather was reasonable when we started the walk-in, some cloud hanging above us, but sunny spells as well and not too windy in the glen. River Carron was in spate and we were glad that our route didn't involve any river crossings. There are some small waterfalls along the walk-in: They looked much more interesting with extra water Carn Chuinneag just peeking out from behind the lower, grassy ridge: As we approached "our" hill, we noticed a shower coming. At the moment it was still behind the Graham, but the wind was blowing from the west and we were sure, this rain would reach us sooner or later: 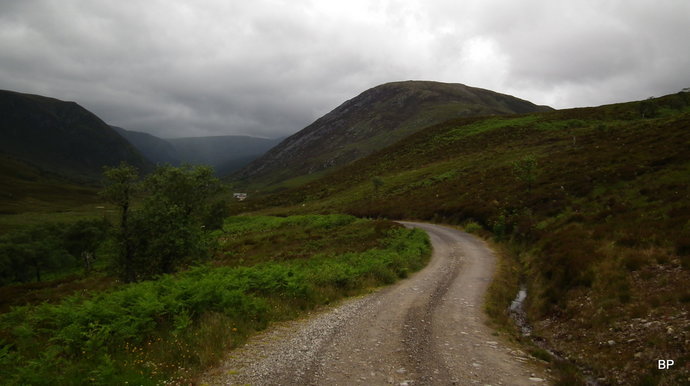 There are a couple of new buildings, summer cottages, not marked on 1-25k map, just next to the bridge over Allt Riabhach. Just past the bridge, we noticed a faint ATV track, climbing the slopes of the Graham. We stopped to put on waterproofs, as the rain was definitely getting closer now, and charged up the wet grass.
The rain is near:

As we gained height, there were nice views behind to the east and south:

The ATV track, though wet in places, can be followed to the height of about 400m, then it shrinks to a vague path (seen here to the right), but apart from being boggy, this slope presents no real problems to a fit climber:

The rain arrived as we pushed up to the top of Carn Alladale, the clag came as well and we lost the views. Thankfully, we were on the leeward side of the hill, so the wind didn't affect us for a time being. We took it as a a good omen and actually enjoyed the climb, giggling and joking when one of us slid on wet vegetation. We passed just below the summit of Carn Alladale, aiming for the long ridge leading to the true summit of the Graham. Here, the wind hit us, but it wasn't nowhere near as bad as in mountain forecast. The rain has actually stopped and we even took some photos with the thinning cloud in the background:
Waterproof Panther

The cloud began to lift and we were impressed by the vertical face of Creag nam Fuaran:

We descended to the first col on the ridge, which is divided across by a high deer fence. There is a gate at 407903 so we aimed for it. It was padlocked, but easy to climb over. From the next bump (598m) the rest of the ridge looked piece of cake:

Kevin taking a breather, with Carn Alladale behind:

Weather was improving, we decided to stop on one of the countless lumps along the ridge, have a cup of tea and enjoy the views while they lasted. The sun came out and for a short time it felt like summer again! Carn Ban is the last unclimbed Corbett for us in this area, but we want to do it from Loch Vaich, where we can use bikes to shorten the walk-in:

View back to Carn Alladale and Carn Chuinneag in the far distance: Kevin getting ready to go: As we reached the next top (667m), we could now see the true summit - and weather was turning nasty: From the west, an apocalyptic-looking cloud was charging towards us with enormous speed. Only a few minutes ago we basked in sunshine and now...

Before the cloud reached us, I managed to snap a panoramic photo:

Of course, we had to re-dress in the waterproofs. We took them off earlier, so now we were fighting to be ready for the storm: Actually, it was not a storm, just a very heavy shower. In seconds, visibility dropped to a few meters, but we had no problems navigating on the easy ridge. We descended to a small lochan at 396921, and from here it was only a 20m climb to the trig point. Sadly, the rain persisted and we saw an absolute zilch from the top. Shame, as this summit is said to be an excellent viewpoint to Assynt weirdos... but not today, I'm afraid.
Views, views, where art thou??? After taking a few blurred photos on the windy summit, we run back down to the col. Here, a quick look at the map and we decided to descend SW slopes to a path by Allt a'Chlaiginn (this route is suggested by SMC Guide). Of course, as we started descending, the summit behind us cleared. Oh, how typical!!!

The descent was easy on grass and heather and for another 30 min or so, we had summer weather again! As we reached the bottom of the glen, we discovered the the path has been developed... into a freshly-bulldozed track. Here's stalking country for you 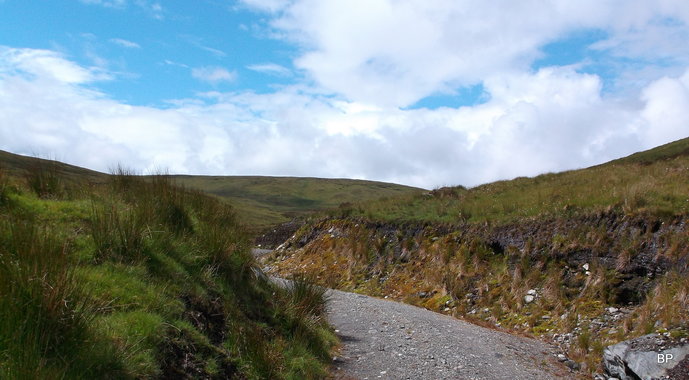 At least the track makes for fast going, but having walked about 2 km down the glen, we were chased by another heavy shower, so we had to stop and waterproof ourselves one more time At least in warm temperatures, rain doesn't bother us that much. We were dry by the time we returned to the car park. And the walk back was quite pleasant, along the humming river

..................
Summing up, not an epic, but a lovely route, we will come back one day in better conditions, to see the views from the summit. Kevin tested his new summer boots (Brasher-designed Berghauses) and he was happy with them, at last he returned home without blisters

Looks a nice walk with some impressive river scenery well captured in your photos. The Grahams do come in handy sometimes!

Was just looking at this hill last night for our agenda sometime soon. Hopefully with better weather than you got however

This hill has been on the radar for a while, a good one for rainy days

It seems the coming weekend will be wet, too, so probably we'll pick another Graham rather than a huge multi-Munro climb.