Gordon had planned to return to Rannoch to do the 2 munros he'd spied from our previous trip to capture Meol Meoig, so having spotted the same ridge of high pressure building on the weather map, I hitched a lift with Gordon to do Leum Uilleum by train from Rannoch.
We headed off at 5am to be in time for the 8.46 train to Corrour.
At the station, the cafe was open so I ordered a bacon roll & a brew to await the train. To my angst, the cafe owner announced that there were no trains today because of the strike ! Arrrgh !!
New plan...........
I decided to go for a walk down Loch Laidon to fill in the time until Gordon had finished his hills so, having finished my roll & tea, strolled off in the direction of Laidon. After about a mile down the loch, I realised that I wouldn't see very much from the track as it passed through a mature forestry plantation, so I turned back and scoured the map for a new destination. This was when I noticed a track leading up the E slopes of Stob Na Cruaiche. ( Gordon had pointed this hill out to me in the cafe, but I had discounted it as "probably being too boggy". )

I headed up the track until it emerged from the trees and continued up the hill. Eventually, I arrived at a flat grassy area where the track terminated, but spotted a quad track heading up the hill in the general direction I wanted to go, so set off following it until it emerged near the summit of Meall na Doire, the first top on the ridge. 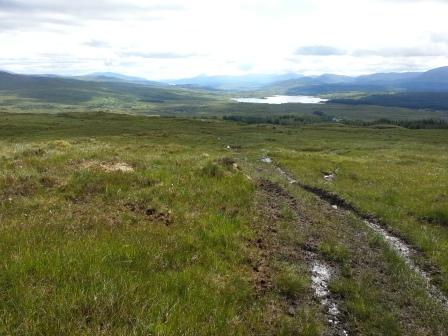 Here I glimpsed the top of SNC, which seemed quite a distance away. 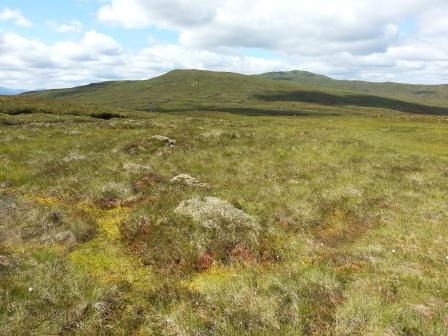 Getting down into the bealach was haggy & tussocky, even going downhill, on the route that I chose, anyway 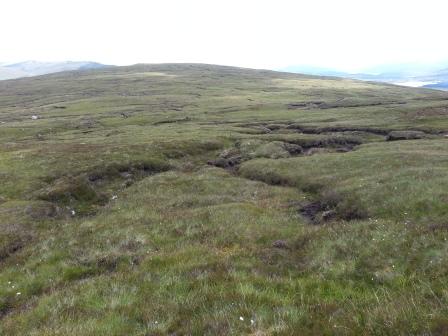 Managed to navigate a path up onto Meall a Bhuirich, characterised by its triple cairns with embedded commemorative plaques of the Pearson family. 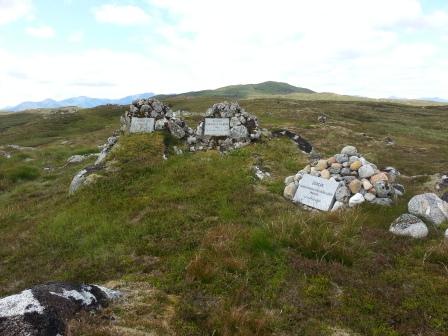 The Pearsons plaques on Meall a' Bhuirich

They have a fantastic view down Loch Rannoch, dominated by the unique conical shape of Schiehallion !
As I was trying to work out an easy route across another haggy bealach to the bottom of the final ridge up to SNC,
I spotted a couple of figures leaving the summit of SNC. We met on the crest of the first bump, where I noticed this quad track. The two ("Edinburgh" - I think ) lads confirmed that it led directly to the top.
Looking down, we could see the track disappearing over the edge of the ridge in the general direction of Loch Laidon, so we agreed it would potentially be an easier way down and planned to follow it.
After exchanging pleasantries, we parted along the quad track in opposite directions. True to their prediction, the quad track took me directly to the summit trig point & cairn.
The stunning panorama that met me as I breasted the summit fairly took my breath away ( what was left of it ). Uninterrupted views all the way round from Shiehallion, Corrour, the Easains, the Grey corries, the Ben, the Mamores, Glencoe, the south Rannoch hills, & the Glen Lyon hills - just stupendous. What a view point. 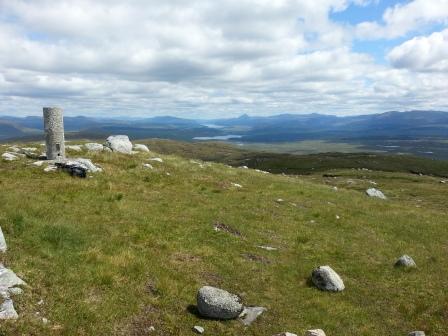 Shiehallion and the Tummel valley 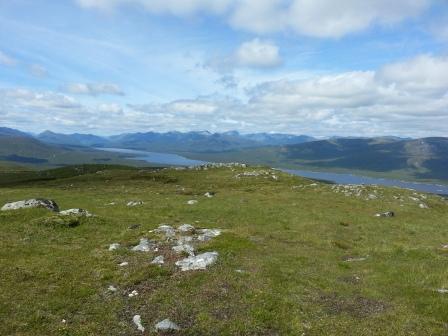 The Mamores etc and the Ben 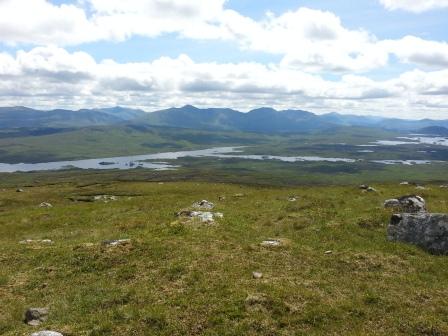 I lay down in a wee grass "chair" on the E side of the cairn and mused that the Pearsons had indeed selected a worthy view for their last resting place !
With only a puff of occasional breeze and the occasional bumble bee alighting on my leg, presumably mistaking my trousers for a flower, until it sniffed my sweaty odour and took off for a more productive landing site, I lounged in total comfort !
The Ling was starting to flower, beginning the unmistakable purple hue that the scottish hills have in late summer ( what summer ? - is it today ?).
As I lay there in total ecstasy, even dozing off for a few minutes, I couldn't help appreciating how lucky we are to have these wonderful environs on our doorstep.
Eventually, I had to drag myself away from this mountain heaven and explore the descent route along this mysterious quad track. 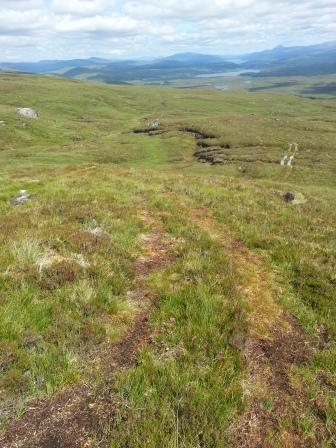 The descent quad track near the top of Stob na Cruaich

Sure enough, it dropped off the side of Stob an Armailte and contoured below Meall a Bhuirich, passing between an old radio mast and the remnants of an electric fence before dropping down into the trees alongside the burn which flows from the bealach between Meall a Bhuirich and Meall Liath na Doire, emerging on the forestry track which runs along side Loch Laidon. 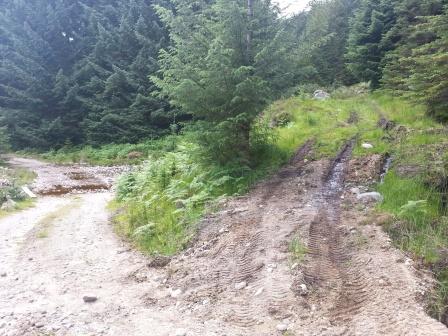 A pleasant 2.5km walk through the trees got me back to a busy Rannoch station cafe in time for another brew, accompanied by a slice of the Rannoch station cafe's patented Midgie cake, while Gordon whizzed down the Alt Eigheach track on his bike, back to the car and thence along the road to pick me up.
When we met in the cafe, Gordon was also hyped up and enthused from his day on the hill and we excitedly swopped experiences as we drove eastwards towards Pitlochry , dodging a mega bus that occupied the whole road whilst heading west.
We felt we had earned our Pitlochry chipper today !
Altogether, a most satisfactory day in spite of the train strike trauma and Leum Uilleum will still be there on the next braw day.