As a family we were holidaying on the North Welsh coast and our proximity to Snowdon meant it would have been criminal not to visit Snowdon. We planned to start from the car park at Pen-Y-Pass and thought arriving at 9:30am on a Thursday morning would be early enough to secure a parking space. The car park was already full and a warden directed us down the pass of Llanberis to a car park were we could catch a Sherpa bus back to Pen-Y-Pass. 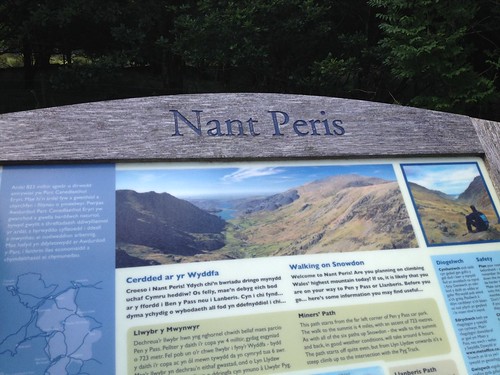 The car park at Nant Peris was fairly empty when we arrived, but by the time we’d put our boots on another half a dozen cars had arrived. My advice to anyone is to bring some money with you. The car park is pay and display so you’ll need some change. It cost us £5.00 to park one car for the day and the bus from here to Pen-Y-Pass was £1.50 each way. The bus gives change, but you’ll need pound coins for the car park.

My wife and two younger children we’re going to ascend Snowdon via the Pyg-Track and my older son – Callum - and myself would cut off the Pyg-Track to go over Crib Goch and then meet up with the others at the summit of Snowdon. 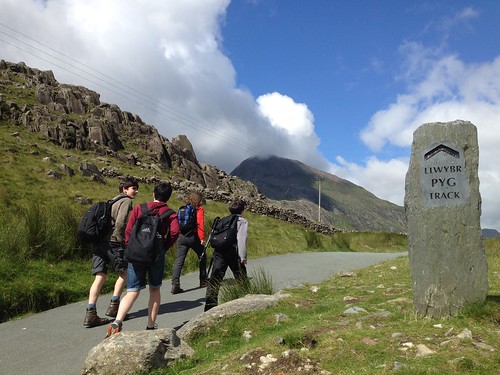 The Pyg-Track was busy and most of the people who had been on the Sherpa bus with us had chosen this route, with the minority taking the Miner’s track. The weather was dry and the wind was from the North West around 20 mph.

The path off to the Crib Goch is fairly obvious and is at a point where the Pyg-Track levels out. I took the obligatory photo of Callum at the stone sign and also the warning sign on the style. After the crowds on the Pry-track it was nice to have some solitude. We could see a couple on the scramble and there was a couple just behind us having a wee break before heading on, so compared to the path we’d been on earlier this was empty.

The scramble was great fun with plenty of good foot and hand holds and Callum did a great job in finding a route up. 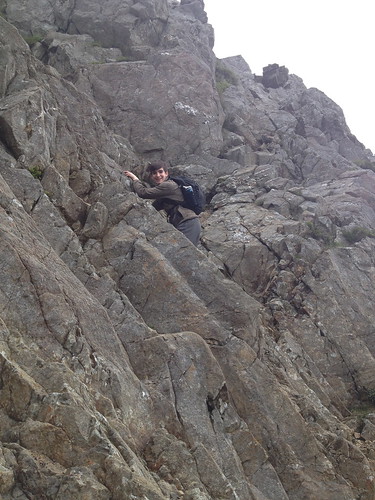 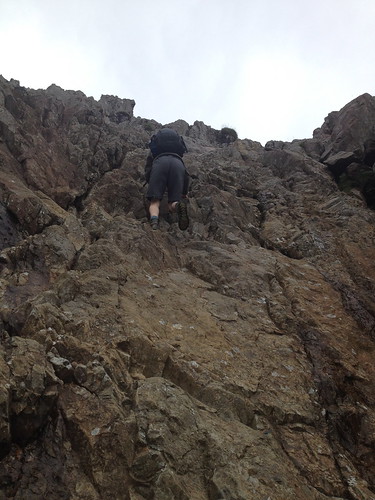 We quickly caught the couple we had spotted in front of us and carried on up to the start of the ridge where we found an older gentleman having a wee break. We decided this was also a good spot for a bite to eat before heading of and exchanged the normal mountain pleasantries of “How’s it going, where are you going?” He wished us a good day and set off with the parting words, “you’ll probably catch me up further along the ridge”. Sure enough we passed by him around the pinnacles. 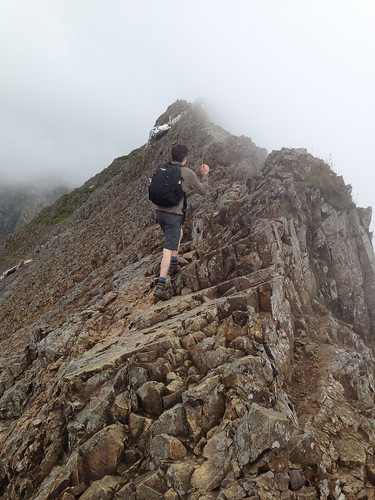 Cloud was sweeping onto the northern face of the ridge so there was no view down into the pass of Llanberis. However, the view down to the Pyg-Track and the reservoir was clear and we spent a few minutes trying to spot the rest of our group. Callum took to the ridge like a mountain goat. I was a little more cautious and crossed using the peak of the ridge as a handrail. By the time we’d reached the pinnacles the weather had further closed in and while visibility down to the left was clear you could only see about 10m in front of you.

After the pinnacles the way ahead was not so clear to us and the lack of visibility was not helping. We veered too far to the left on a track and had to search for a suitable way back onto the ridge. After some fairly hard scrambling on a route that is best described as “sketchy” we were back on track. My legs had recovered from the scramble up onto Crib Goch and I enjoyed scrambling along this section much more than on the Goch itself. I found Crib Goch harder, not because of its exposure, but we scrambling up to the ridge at quite a pace and had used leg muscles that I’d not used for a while. By the time we’d reached the pinnacles my legs had recovered making the rest of the walk more enjoyable.

Eventually, the concrete trig point of Garnedd Ugain came into view. The top of the trig point is a bit wobbly and appears to be connected to the rest of the structure only by the reinforcement bars. 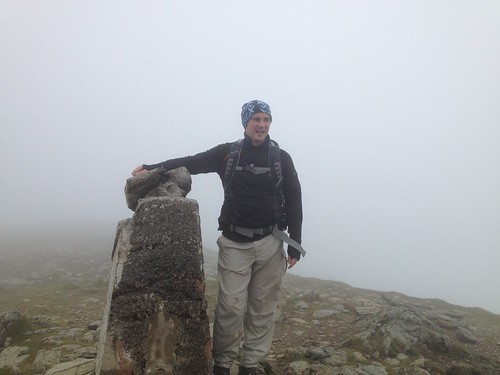 The cloud had further thickened, so there was no view to speak of. This lack of visibility meant the decent long the broad path from the summit to where it meets the Llanberis, Pyg and Miner’s paths was a bit of a trudge. I’d received a text from my wife saying she and the other two boys were waiting for us in the summit café and as we hurried along to meet them disembodied voices started to reach us through the mist and soon silhouetted figures came into view.

At the summit there was a queue to the summit marker and the man made steps to and from this made it look more like a religious shrine of pilgrimage than a mountain summit. 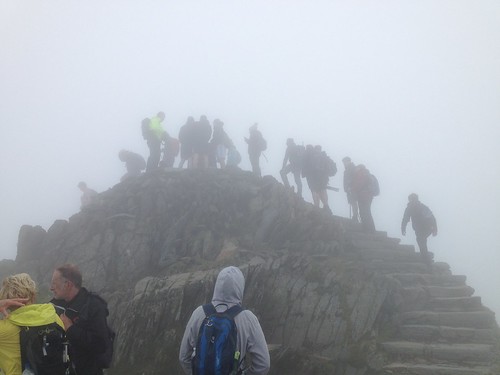 Callum and I met the others in the café, had a quick drink and then we set off to head back to Pen-Y-Pass via the miner’s track. Their ascent had been enjoyable and they were most pleased that they have reached the summit of Snowdon before as had. As we descended the miner’s track the West peak and Llwedd Bach were bathed in sunshine, but the cloud stuck to the summit of Snowdon. Once we’d reached the shore of Glaslyh, the view back to the waterfall was beautiful. This caught me by surprise, as I’d tended to associate Snowdon with crowds and ugly paths scaring the mountain. However, it really is a spectacular mountain and the view of the sun-kissed ruggedness of the western ridge is wonderful. I’d definitely like to return at some time to do the whole horseshoe.

Once at the car park we did not have long to wait till a Sherpa bus arrived to take us back to where we’d parked. As we drove back towards Betws-Y-Coed we looked back and as if to taunt us, or whisper ‘haste ye back’, the summit appear cloud free.

Graeme - Yes, it was a great day on some great hills. We both loved the scrambling and it has wetted the appetite for taking on some more walks that include some scrambling .

Now you've got some photos up, I can see it was a good day!

Looks like your boy is a natural, the shot of the folks heading up the steps to the summit in the mist is almost otherworldly