Was keen to get out somewhere having been rather busy lately and having booked some leave a while back but, with a rather mixed forecast, the best option seemed to be to head for the north east. It looked as though alternate days could be reasonable but in between perhaps not so good - turned out more or less like that with 10% - 20% precipitation probability frequently becoming 100%.

Parked on the verge just off the B955 SE of Clova at NO353715. The track actually starts at NO362710 but couldn’t find a place to park the car without a no parking sign. Set off at 0740hrs - walked up to the left of some trees before crossing the burn and joining the main track. Walked up to Loch Wharral to visit the estate’s bothy then NE to Ben Tirran and up to the trig point at The Goet. Back down the same way without the detour to Loch Wharral.

Took just over an hour to drive to Millden Lodge - parked beside the phone box at NO540789. Opted to take the bike - cycled up past the Mill of Aucheen and took the left fork in error but didn’t go too far before realising it wasn’t right. Back down then up the track which runs to the west of the Burn of Turret. Decision time at the fork in the tracks - decided to go to the right heading initially for Hill of Turret. Dropped down to cross the burn then uphill. There are various hill tracks and wasn’t sure which to take - followed an old hill track before rejoining the better track and which I could now see I could have used instead (used it on the return). Cycled/pushed as far as I could until it got just too steep to keep going. Locked up the bike then followed the track over the Hill of Saughs until it ended - moorland from there on with some boggy sections to the summit. Same route for the descent other than staying on the better but slightly longer track further down.

Slightly longer drive to south of Logie Coldstone on the A97 then west - parked in the Morven parking space at NJ410044. Had previously considered cycling form the west but the easterly approach looked preferable. Walked past the derelict Balhennie, through the gate with moorland signage then steeply west uphill. Met two sets of walkers on their way down. A little light rain further up but at least it was a bit clearer. Briefly considered taking the longer way back down but decided against it due to the rain. Back at the car and time to get some dinner before the drive up to Glen Rinnes.

Drove down the road and stopped at the gates of the farm at Ellivreid. Couldn’t see anywhere to park so knocked on the door to ask - a man appeared and kindly said that I could park on the grass to the side of the driveway. Set off over the field to the left of some trees then headed off southwards over Hill of Achmore and Lapprach before turning northwards to get to the summit. Quite a lot of boggy and heathery ground made the going hard at times - also raining quite heavily with a very strong wind. As a result, decided not to return the same way but instead to follow Morton’s Way - quite a bit longer but at least the wind and rain would be mostly behind me. Followed the track north then west and down via Folds of Corhabbie. Crossed Corryhabbie Burn then back to the car.

Drove down to Knockandhu then on through Chapeltown and parked at NJ245204. Set off towards West Auchavaich farm and saw the farmer standing in the middle of the yard. Wasn’t sure whether to keep going through the farm or skirt the south round some trees until he shouted to me to ask if I was lost. Walked up to him and asked whether it was OK to walk through the farm towards the hill. The conversation went something like this:
Farmer: “Where have you come from ?”
Me: “Glasgow”
Farmer: “So you should know about Scots law and your rights”
Me: “Yes but it just seemed considerate to ask”
Farmer: “Just follow through the farm up there and that’ll take you where you want to go”
Maybe a small thing but given some of the stories I’ve read, this was rather refreshing and helpful. We chatted a little more before I continued up through the farm, through a field and to the south of some more trees. Then a more or less direct line SE up the hill to the summit. Hard going through thick heather but tried to use some animal tracks where possible. More rain on and off - could see the squalls coming in from the Cairngorms each time. Same route for the descent back to the car.

Drove south to the Lecht ski centre and parked in the car park. Helicopter just about to take off from the carpark. Followed the track up beside the ski tows then over to Beinn a’ Chruinnich. From there walked down and up to Carn Ealasaid via some boggy ground. Occasional squally showers still coming over from the Cairngorms. Same route back to the car.

Short drive down and parked at Corgarff Castle car park. Set off just after 1800hrs up the track beside the castle then south to join the main landrover track. Could see the 748m top in the distance. Followed the track south past some trees until it started heading west. Broke off and then went SW to the summit. Occasional signs of a faint track but mostly trackless with some sections of bogs and peat hags which sowed progress. On the upside, it had turned into a nice evening with some rather interesting cloud shapes. Returned the same way.

Parked in the Keiloch car park and had remembered to bring change for the parking charge. Later than planned due to being tired from the previous evening’s walk. Cycled up the road towards Invercauld House before taking the turn off to the right on to one of the tracks through the trees.

Followed the track on to more open ground 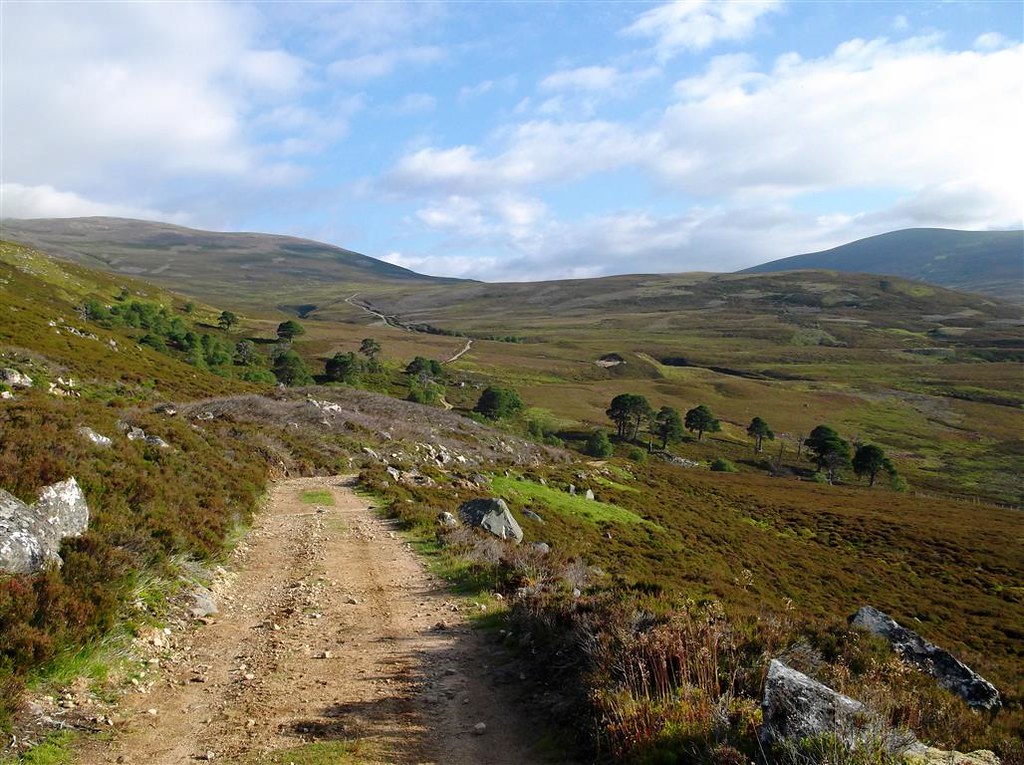 Found it hard going and had to push the bike more than normally required - don’t know if it was just the effect of the previous two days or that it looked like the track had been resurfaced with a lot of loose stones which it made the ascents impossible for me to cycle.

Got to NO180981, locked up the bike and headed along the track towards Carn Liath

Followed the track uphill and over the summit of Carn Liath. Then initially headed eastwards towards Creag an Dail Bheag. It didn’t look higher but is marked as being higher on the map.

The extra distance was worth it as the summit affords good views towards Ben Avon.

Back down the same way to the bike then cycled (and pushed mostly) up to the foot of Culardoch.

Locked up the bike and set off up the hillside - found a track here and there but doesn’t take too long to get to the top.

Back down to the bike and found these Burnet Moths on my cycle helmet - thanks to Sgurr for identifying them for me.

Met a father and son just after I set off - they were cycling (and pushing) the full loop. Again found it slower going than normal on the return being very cautious not to let the front wheel wash out on the downhill stony sections.

Also cycled past the Invercauld statue

Back at the car before 1300hrs - a quick wash in the facilities with the Angry Corrie wallpaper before the drive home. Back late afternoon in plenty of time to cook the family dinner. Had managed more than I had originally hoped - weather wasn’t as good as forecast but no complaints really.

Interesting report that rockhopper, some nice photos too

Well that fairly bumped up your Corbett count

A good number of hills there rockhopper, with plenty of variety.

I was up there about the same time, but just doing one a day and then relaxing in the afternoon. In fact, I was on Carn Ealasaid the same day as you, although I went up from the hotel to the south-east.

Nice, quiet part of the world up there, even with the slightly unnerving thunderstorm on Corryhabbie Hill on the Wednesday. Next time, though, I'll put more effort in and get at least two Corbetts done in a day; you've inspired me

Well done, I couldn't get all that done in the time you did and it's my stomping ground lol

Sounds like a decent chap that farmer, and very polite of you to ask firstly. I was in the Lakes at the weekend and went through Skelgill Farm, thanks to signs being put up.