I was staying in Glenmore (Loch Morlich) for several days, but those had already seen the Cairngorms swathed in rain and cloud, with at least one more day of poor conditions predicted. So, after some checking of different area forecasts (and comparing MWIS with the Met Office's offerings) I decided on this route, which I'd had sketched out for a long time.
It did require a drive west (and then reversing that since I was booked into Glenmore for another night), but looked like an interesting shortish day and potentially better conditions to be out. The main roads were fine (I always enjoy the A86 across the central Highlands), but the narrow single-track road up to Fersit took longer to drive than I'd allowed for. There were several other vehicles parked in the open area, as well as cyclists along the narrow road or stopped at lochans beside it.

My late arrival, around 11 o'clock, threatened missing the train at Tulloch; there are only a few trains each day which cover these stops, so a mistake here could write off the whole route. So I pushed my pace walking back along the road, then a short stretch of verge beside the A86. There's about enough space to walk off the road itself, but it is still a relief to get onto the quieter downhill stretch to the station.
That went well as far as reaching Tulloch in good time, but contrary to appearances I wasn't alone waiting for the train. There was also a swarm of midges, or maybe they decided that I was the Station restaurant, opened just in time for lunch. I spent 15 minutes pacing as I waited for the train, probably not the kindest treatment for my feet after covering 3.5 miles in 50 minutes. I was also feeling warm from that exertion and without much of a breeze to keep the insects away. 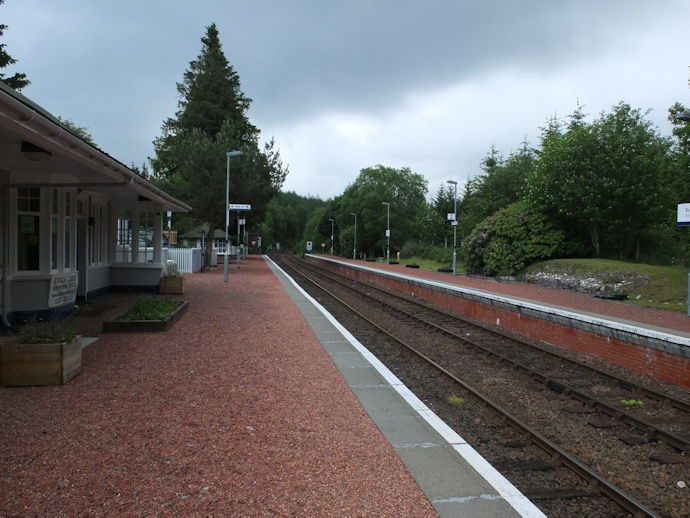 The train duly arrived and I boarded for a short journey to Corrour (£3.90 for a single ticket). I checked with the ticket collector to make sure that the train was stopping and didn't need a request to halt. When we reached the station, a school group also disembarked, though it sounded like there was some uncertainty about the return train. My own concerns were more about a slight shower beginning, enough that I put on a jacket before setting off.

Apart from hints of rain, there was a cool breeze and cloud covering most of Beinn na Lap (and the surrounding hills) from about 600 metres. The first part of the route is on easy tracks, with the Loch Ossian Hostel visible nearby. There were a lot of walkers around, many apparently headed to or around the Hostel and loch. 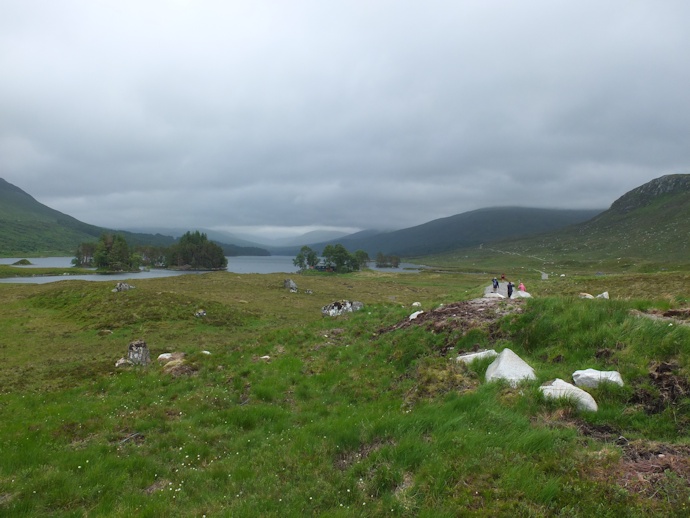 Of those that I passed and saw, only a couple of other walkers seemed to share my aim of Beinn na Lap. I spotted something clinging to a stem lower down the path soon after I passed the couple and the wind brought in hints of a shower. 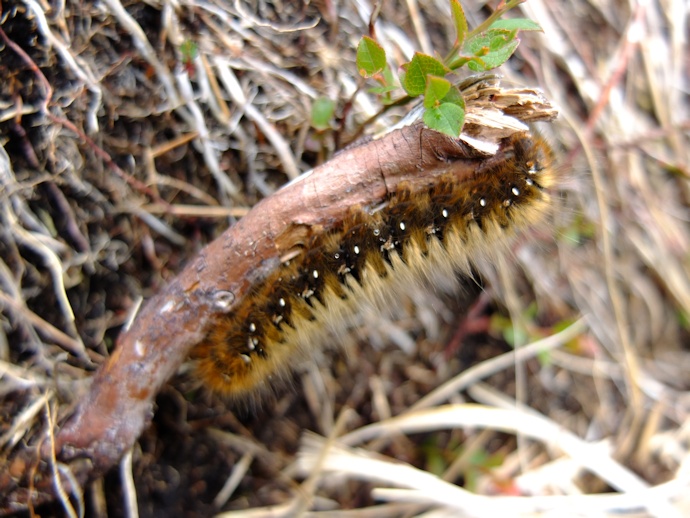 The path grew fainter and steeper, then the cloud from about 600 metres up hid whether anyone else continued or thought the better of continuing through cloud and mist. So far as I could see, I had the hills to myself for the rest of the day - but I couldn't see very far at all for most of the walk!

I kept to the south flank of Beinn na Lap for much of the ascent, hoping to avoid some of the northerly winds and rain. When I did come out onto the southeast ridge, there was a faint path over the stony ground but the shape of the hill provided plenty of confirmation of my heading. That was just as well as the wind and some light, but driven, rain minded me to push for the top and then get into some shelter where possible.
The cairn offered some protection from the elements, so I had a quick installment of lunch to keep my energy up. 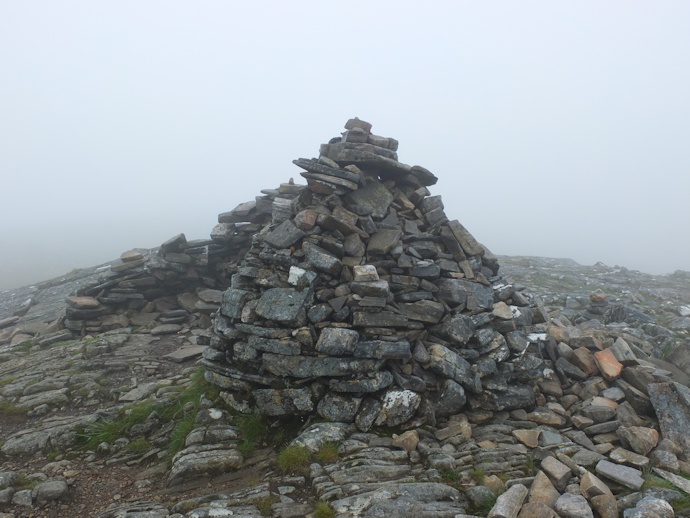 Then I set off slightly north of west to make my way down stony slopes. More heather joined in lower down, where the wind eased slightly and the cloud also seems to have lifted a fraction as I continued down to a peat-bottomed bealach. This is about 400 metres below the level of the cairn, but only rates as "moderate" on my scale of steep pathless wanderings. 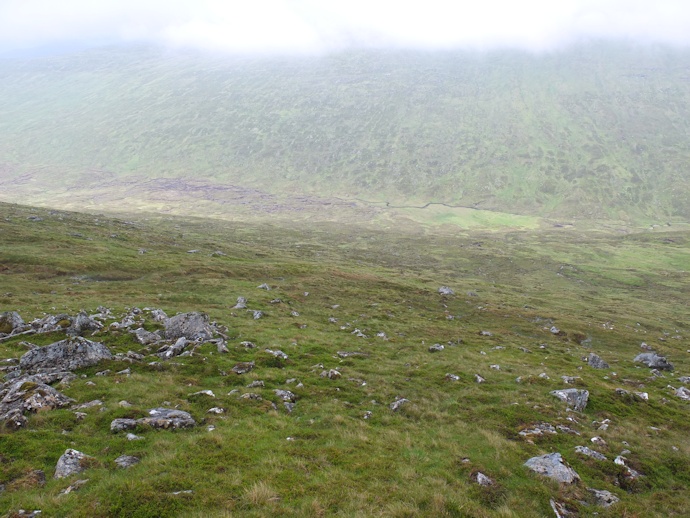 The peat itself was relatively dry, probably still soaking up water despite some rainy days, and I don't remember the hags being deep or rough enough to cause any concern. 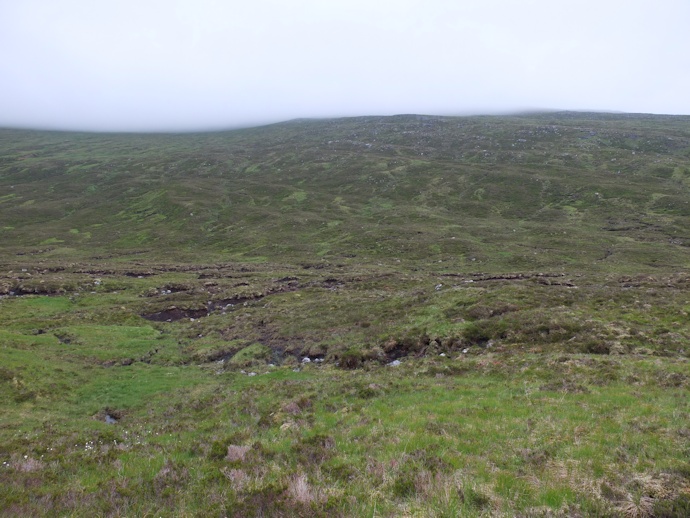 The cloud meant that I didn't have much visual guidance about the later sections of the route, beyond chosing an approach over or around Garbh Bheinn. So I stuck with trying to minimise ascent and distance, while avoiding the steepest and stoniest areas at Creag Tharsuinn. This was just about visible, so I aimed north-northeastwards, trying to find the section of ridge around the 832 metre point. The ground was basically grassy with scattered stones, so fair going despite a wind still finding its way around the hill. 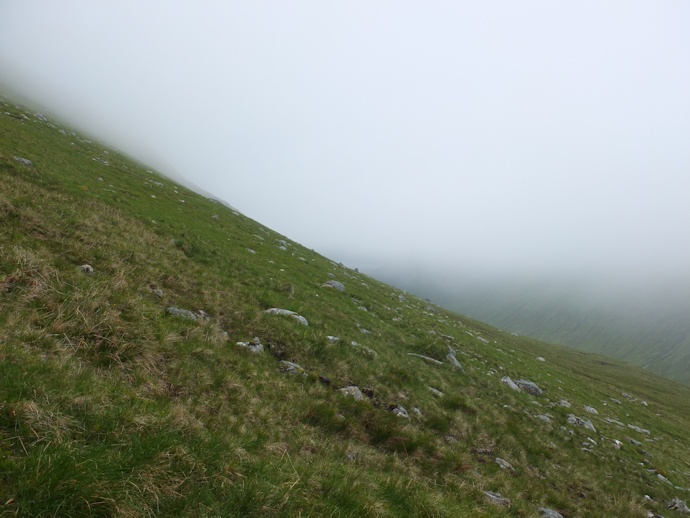 Dense cloud along the ridge made the next few miles quite tiring mentally, especially now that I was more exposed to the northerly wind and some mist-rain. The ground became stonier nearing the Top of Meall Garbh. I couldn't see far through the clag, maybe 50 metres at best, but made my way to visit both of the high points (shown as 976 and 975 metres), especially since they were along my route and gave at least some indication of how I was progressing. I had another snack stop at this stage, for morale as much as anything. 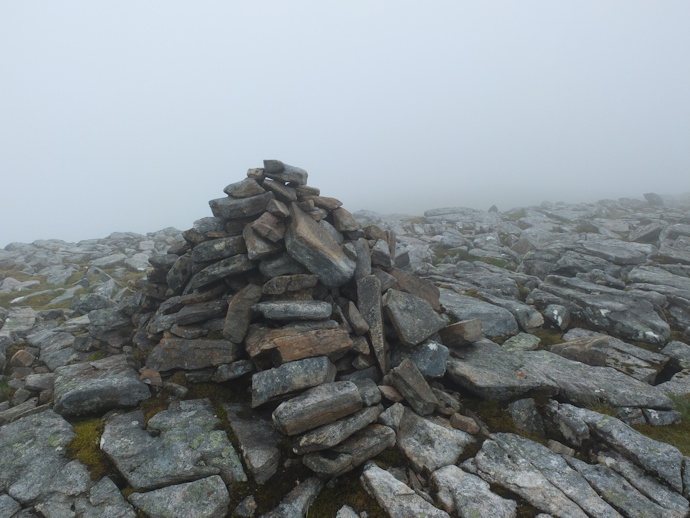 It is little more than a mile from the higher cairn on Meall Garbh to Chno Dearg, but felt like much more. I descended after the second top/outcrop, crossing a more open stretch with the ground dropping away (to Coire nam Cnamh) somewhere to my right. I picked up traces of a path at this stage, from the usual round of Stob Coire Sgriodain and Chno Dearg, but lost them again (or they disappeared as the ground grew stonier).
Chno Dearg rises only 123 metres from the bealach, over about half a mile of distance, but dragged on interminably. It is rounded enough that I was getting no noticeable shelter from the wind and clag, even through the ground itself was straightforward walking. From checking my times, this stage only took 27 minutes, but seemed much more than that. At last the ground levelled off and I could turn right to reach a bulky cairn looming through the mist. 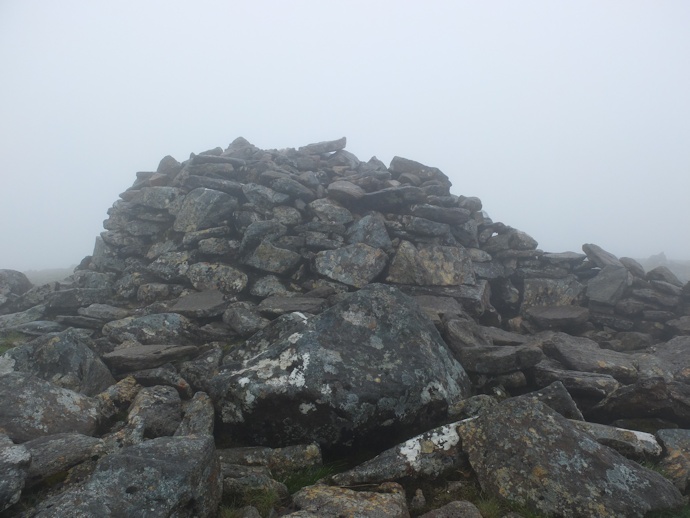 The following stages of the walk also took a lot of concentration and persistence. I occasionally found and left faint paths, or at least the traces of passing feet, but a lot of it was a mixture of using the compass and details of the ground. After descending Chno Dearg southwestwards, I eased right (westwards) to a wet bealach area between Coire an Lochain and Coire Meadhon.
After this, the ground rose and fell, with multiple small knolls, rocky outcrops and dips between them. The ground isn't especially steep or difficult, but continued to be testing to cross efficiently. I visited many of these points, including the minor top at 924 metres, before a more substantial climb to the 958 metre southern Top of Stob Coire Sgriodain. 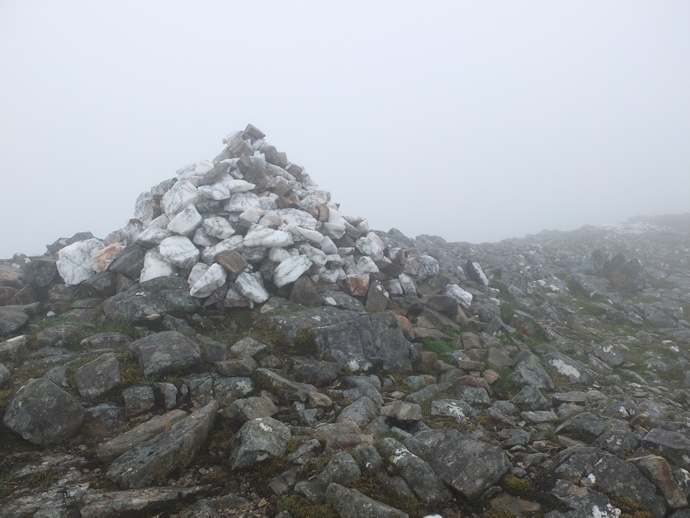 This felt a big milestone, especially as there were now more definite traces of path. I picked my way down into the trench of Glac Bhan, probably named for the white quartzite in evidence here. It's a short but steep ascent to reach Stob Coire Sgriodain itself, where the cairn overlooks a steep drop to the west. The weather still denied me any views, but seemed to be easing as the afternoon drew to an end. 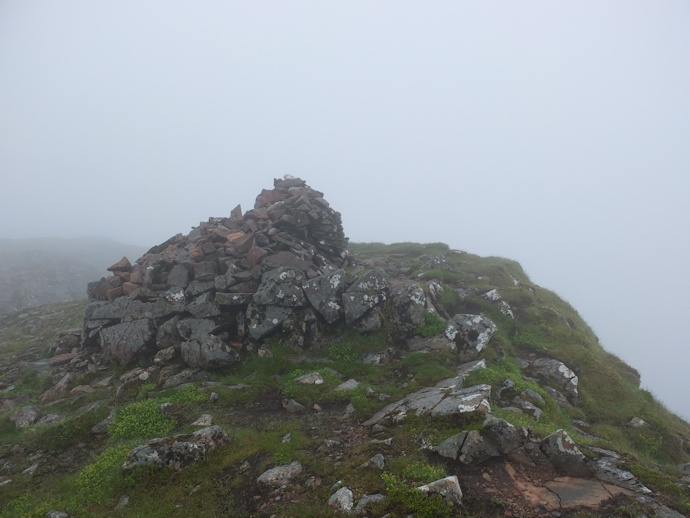 The WH route, usually for ascent rather than descent, follows most of the north ridge. I decided to descend around Sron na Garbh-bheinne much earlier in order to avoid any trouble with craggy ground in the cloud. As it turned out, the cloud soon thinned and brighter patches appeared down in Glen Spean. 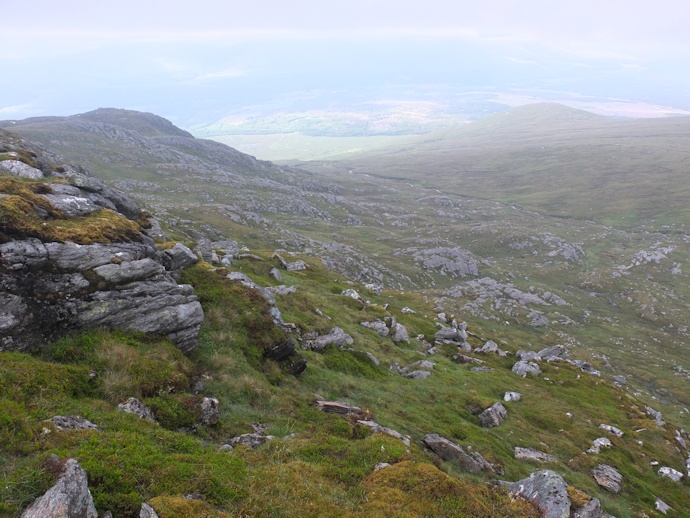 This also offered a view of Coire na Lochain, though Chno Dearg and the upper ridge kept their heads hidden. 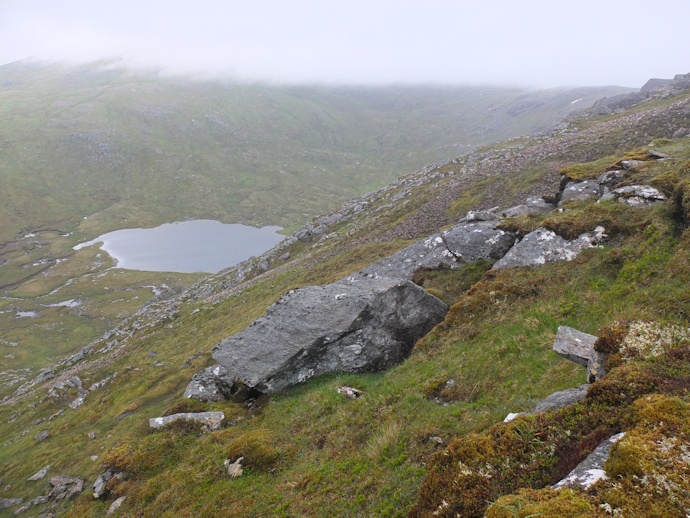 Coire across to Chno Dearg

There was a lot of steep ground, which grew wetter as I descended, before starting to follow a burn headed north. I kept close to Allt Chaorach Beag as it flowed around one last outcrop, then over further saturated moorlands. 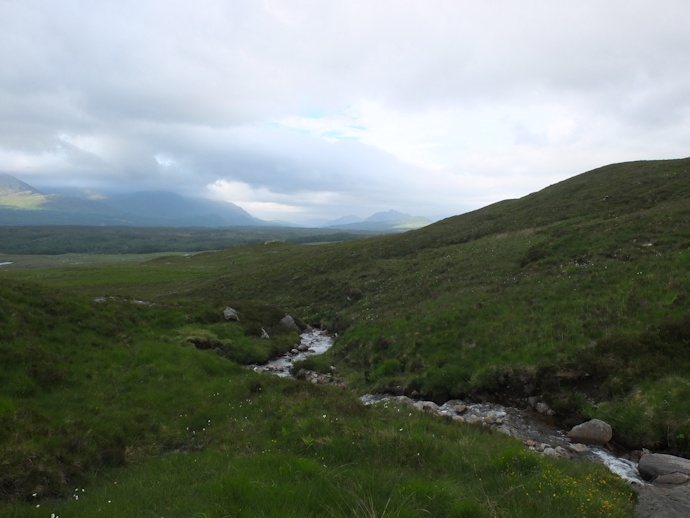 Cloud clearing during the descent

The boggy ground was exacerbated by cattle trampling, but Fersit was drawing closer ahead. I was glad of my gaiters as I squelched over bog moss and trod around other interesting vegetation. 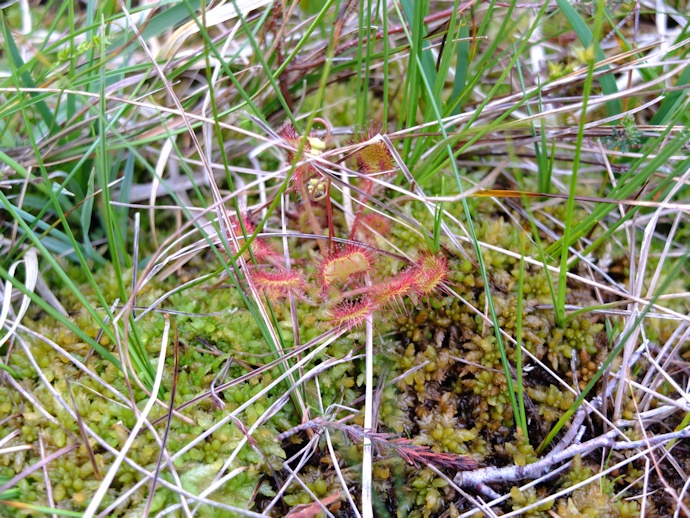 Closer to the farm, I followed a fence line where that kept to some slightly higher and drier ground, then went through a gate onto solid track. That led me past some houses to reach a pair of bridges crossing first the railway line, then the River Treig. 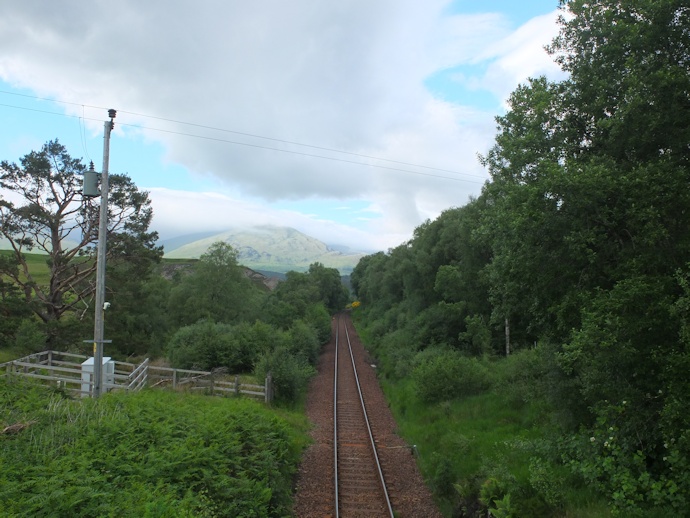 When I returned to my car, it was the last vehicle of the handful which had been parked earlier. I quickly changed out of my boots, ready for a drive east through some evening sunlight towards Loch Morlich. That rekindled some optimism about better weather, which was further fuelled by more promising forecasts. But the outcome of that was another day which I still need to finish writing up.


our_route.gpx Open full screen  NB: Walkhighlands is not responsible for the accuracy of gpx files in users posts
Actual route was Fersit to Tulloch Station, then catching the train to Corrour Station (about 40 minutes spent at the stations and on the train) before the hill traverse returning to my car at Fersit.