Finishing up on Brock Crags

Finishing up on Brock Crags


After five years of periodic sorties, and then a rather more concentrated effort last year, my day to complete Wainwright's list at last. Having climbed all the high ones first, I'd left a smattering of loose ends everywhere to tie up and a final three of Gray Crag, The Nab and Brock Crags probably doesn't make up the most natural route, but this one worked out rather well on a nice cool summer's day. Brock Crags may not be everyone's completion choice, or the most momentous of peaks, but it had been the plan for a long time – a quiet spot with some proper views and a really short way home after the event. (It also meant delaying a revisit to Rest Dodd, about which I had very few kind thoughts, as long as I possibly could…!).

hartsop.gpx Open full screen  NB: Walkhighlands is not responsible for the accuracy of gpx files in users posts
After quite a late start, all my intended parking spots in Hartsop were long gone and it was just possible to squeeze into the last half a space at Cow Bridge (hadn't really considered what the Plan B would have been otherwise on a day when I was only thinking about one walk!). Possibly a good thing to have a longer walk-in though before tackling the very breathless climb straight up the front of Gray Crag. Later in the day I could look back on a clear – perhaps paved - path much of the way up, but you need to start the ascent a bit further along than Wainwright indicates to find it, and I didn't… a good half of the early climb – although more vegetation than rock – was spent in the sort of hands-down scramble where standing still or turning round feels just a little bit risky. Definitely the wrong way, but oddly invigorating (perhaps more so in hindsight!) and when the angle eases you've gained a lot of height very quickly and can enjoy some really nice 'cliff-edge' views before plodding on up the damp ridge to the actual summit. 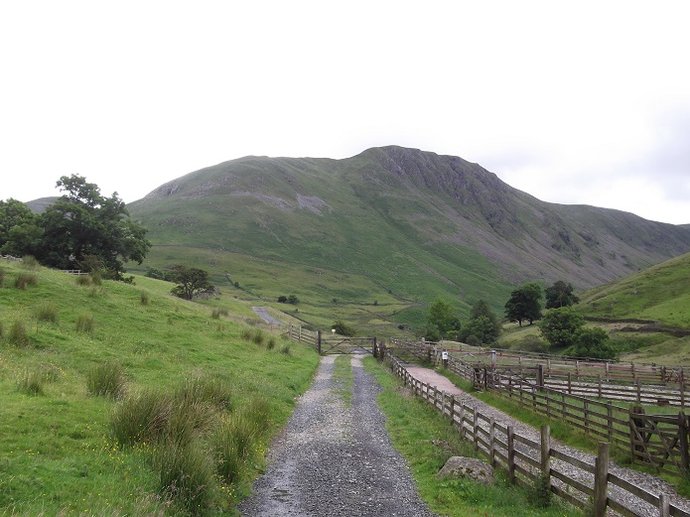 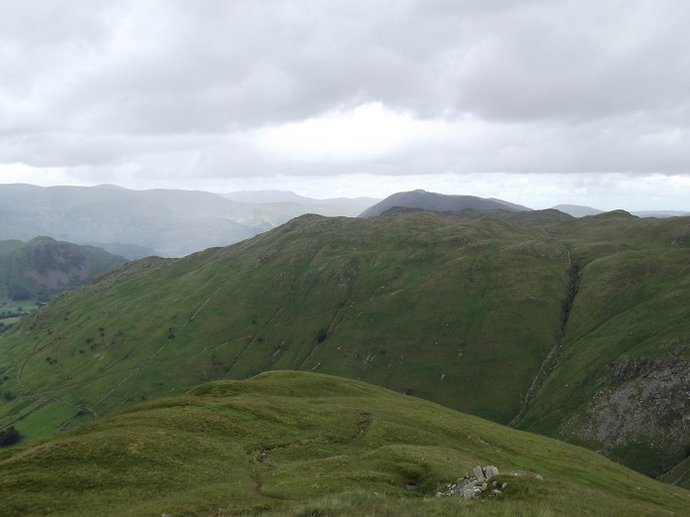 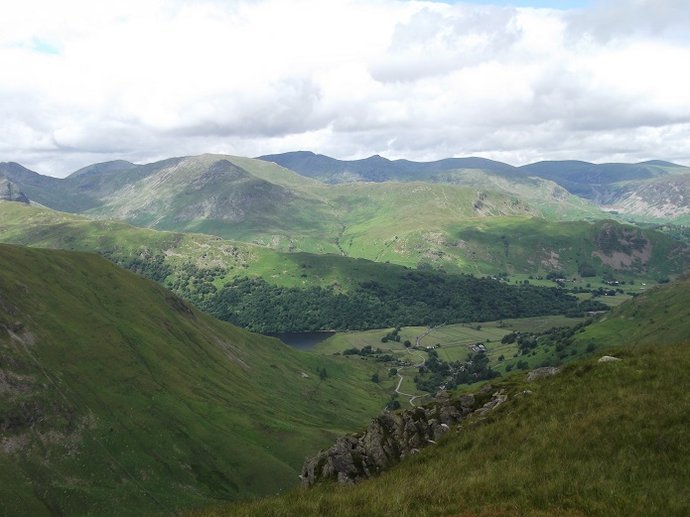 Saint Sunday Crag and the Helvellyn range over Hartsop 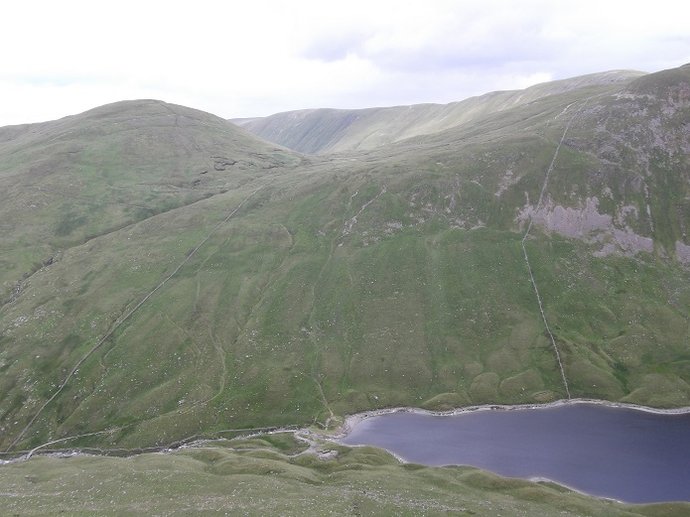 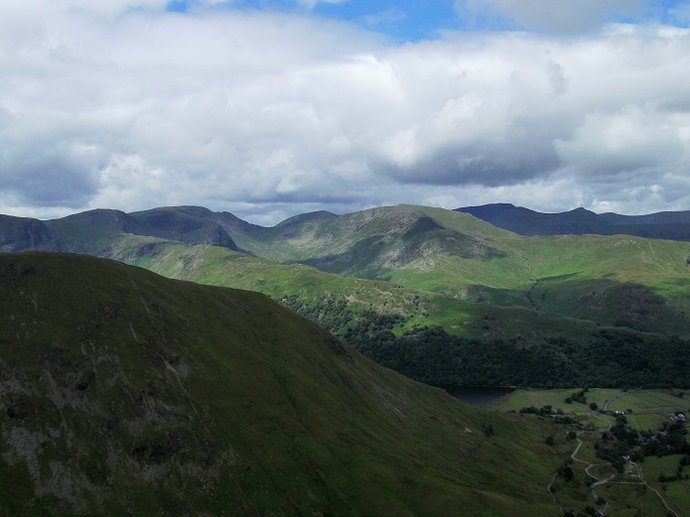 This was the highest point of the day and it looked really easy and quite tempting (but definitely off-route) to continue up to the High Street hills – instead it was a reverse until finding moderate enough angles to descend, surprisingly gently, to Hayeswater. This – and the waterfall-laden Gill dropping down to Hartsop – looks like a lovely spot in years to come, but at the moment there is perhaps rather too much heavy machinery about for that. 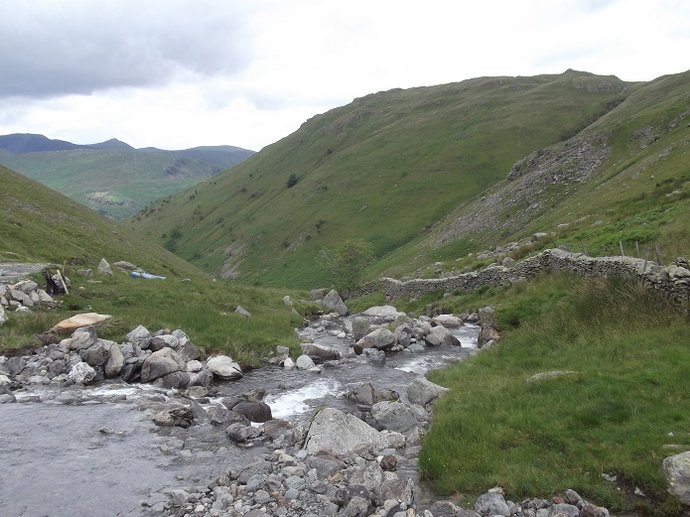 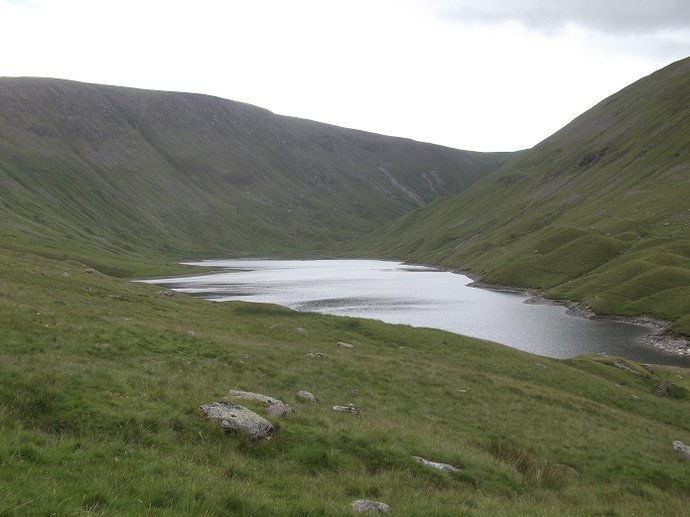 Deep breaths before tackling the long and marshy tramp up the slopes of Rest Dodd – an unavoidable tall obstacle in the way of The Nab – but it was a little more clear a path than expected, easy enough going, and the hill itself isn't as grim as I'd remembered on a wetter, greyer day years back. It's still a pretty good candidate for the ugliest Wainwright, green, lumpy and mis-shapen from any angle it seems… but it's a good viewpoint for better things all around. The Nab, now 'bagged', is very likely to be a once-only hill for me – there's less charm in revisiting a hill when you (legitimately) have to do it by the same route each time, and especially if it isn't that great a route: painstakingly steep down from Rest Dodd and then there and back across some rather wide peat-hags. A good few of these aren't skirt-able but it was dry enough to tramp straight through the middle of them; you might want to steer well clear after a week or two of rain. 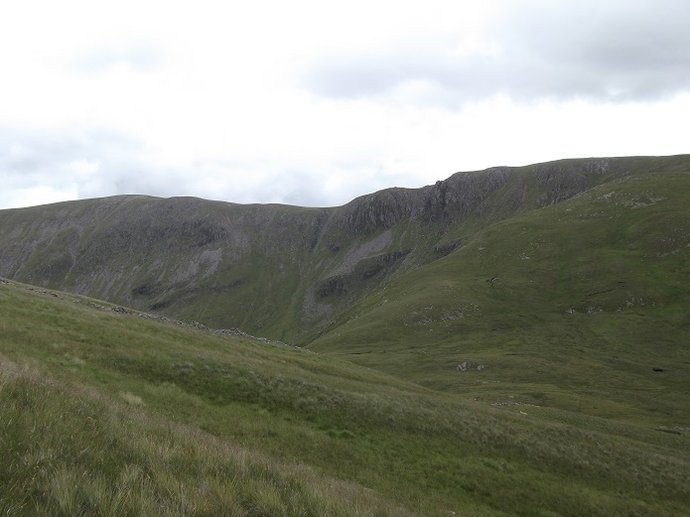 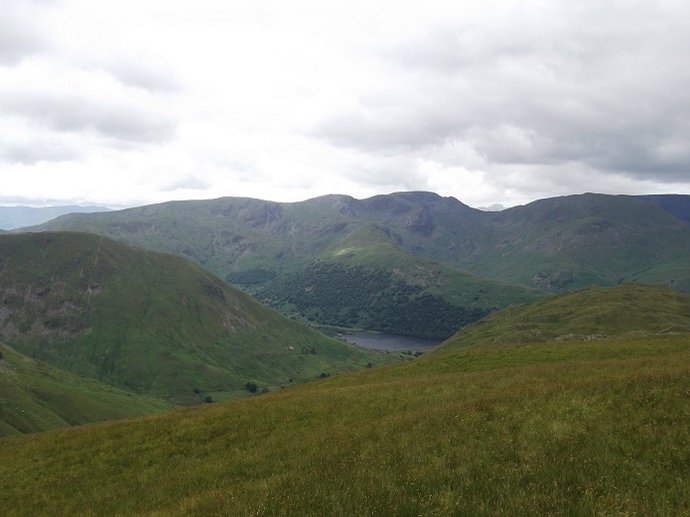 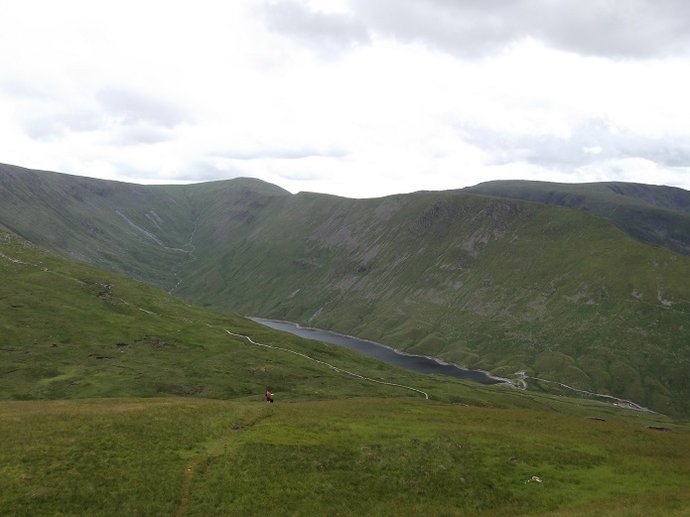 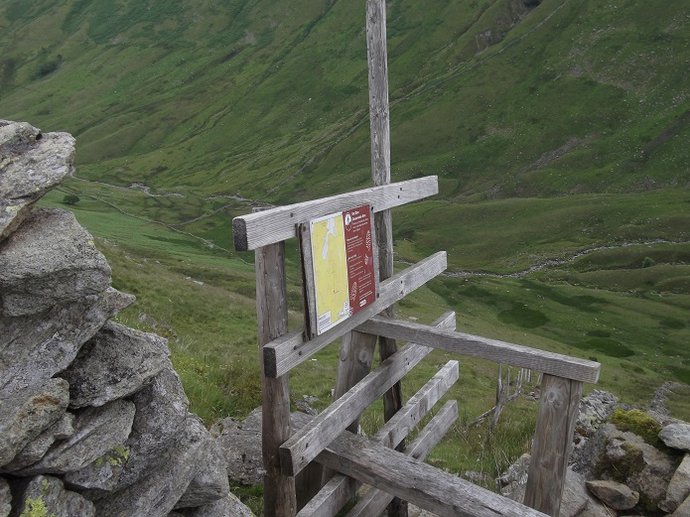 Ramps Gill from the rickety stile heading for The Nab 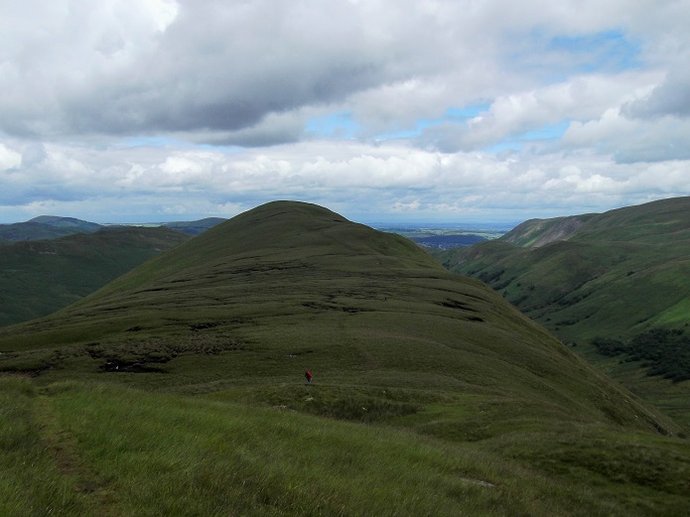 I enjoyed what I thought was an off-piste route cutting across the slopes of Rest Dodd towards Angle Tarn though – decent walking with good views of the valleys north and clear signs that plenty had been that way before: I suppose that it's the obvious bail-out from reascending Rest Dodd. Having expected to see no-one at all round there, it was surprising to repeatedly see someone else athletically haring around what looked like a very similar route – later I saw that all described on the Lakes blog 'Sharkey's Dream', although his route was a far greater undertaking than mine…: http://sharkeysdream.co.uk/PAGES/WALKS/20160703.html. I felt a silly little frisson to see myself (anonymously) appear a few times in there – and very satisfied with the description 'he knew his way around the fells', a nice little badge after only 213 of them!! 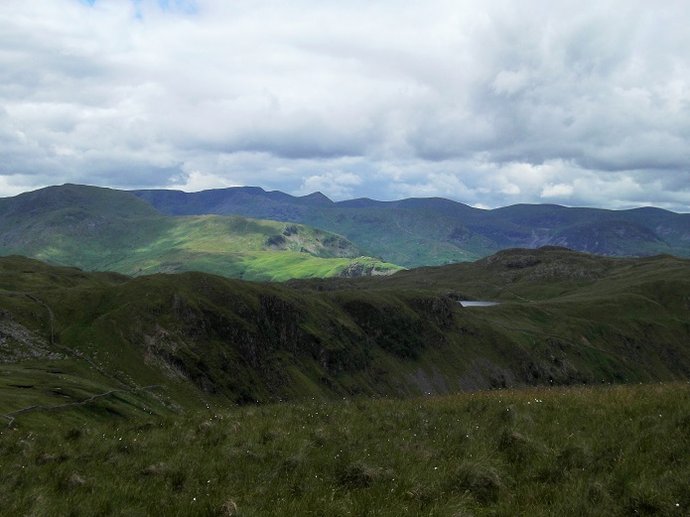 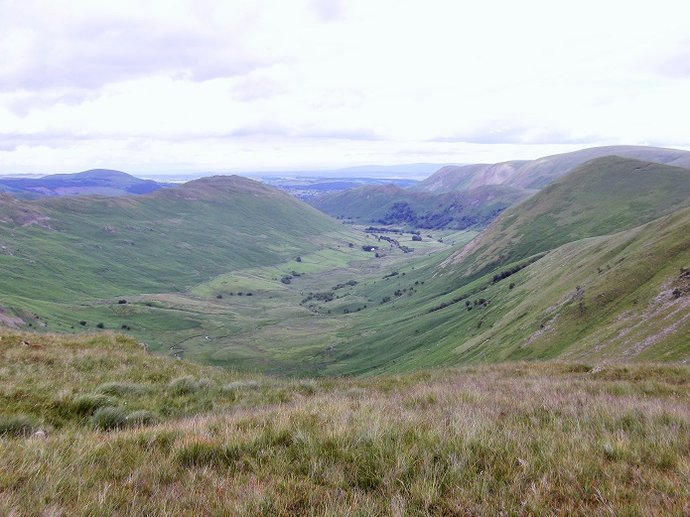 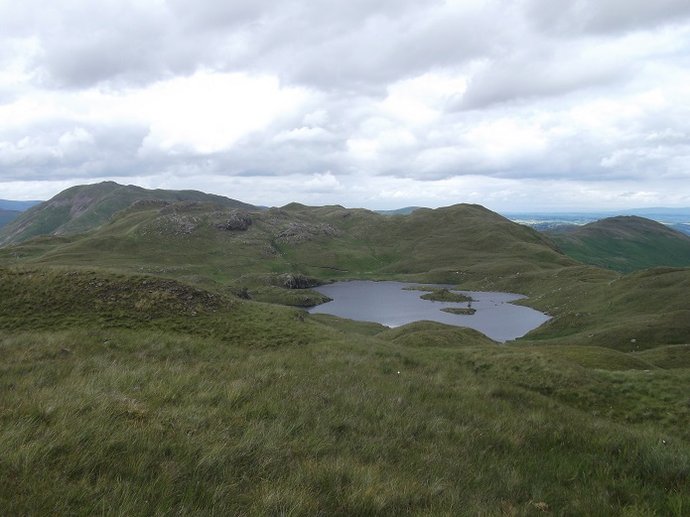 Back in the more popular areas there are a couple of really good views of Angle Tarn, one of the finest of its kind, on the easy tread to my finishing point on Brock Crags. As hoped, it's a fine peaceful little summit and it felt just a little momentous when the sun shone briefly on me for just about the first time as I sat drinking in some epic views of the Eastern Fells (just the views, the temptation of a symbolic Wainwright ale overruled by dull practicalities involving a long drive and a heavy pack…). It didn't really feel much like an ending point – I could look around and pick out some of the favourites from the past and the different routes I could find to return to them, and I knew I'd be back in the Lakes plenty, starting the following weekend, for 2nd, 3rd, and 4th visits, if never a full second round – there are a few on the list that felt more like a duty than a pleasure and, while glad to see them all once, I doubt I'll ever feel obliged to return to some. I took the obligatory summit shot, wishing I had rather more interesting kit to include and lightly cursing the presence of my reluctant walking pole (I resisted this sign of age for a long while, but now it makes an occasional unwelcome appearance when a steep descent is in prospect. It always feels a nuisance for 90% of a walk!), and then set off satisfied on the pleasant little zigzag down. 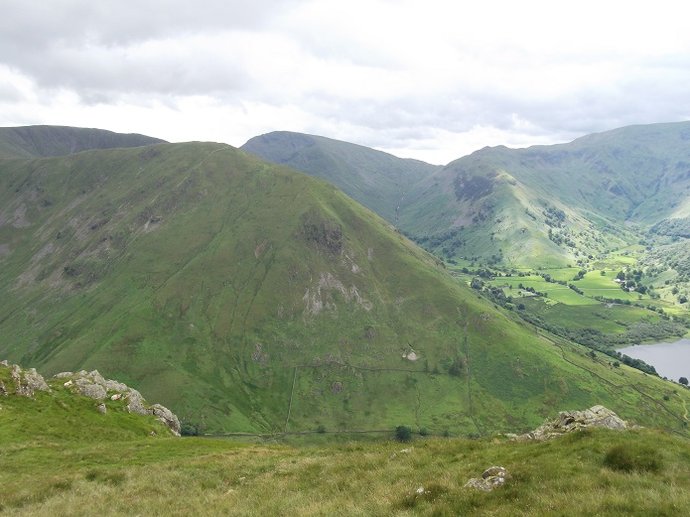 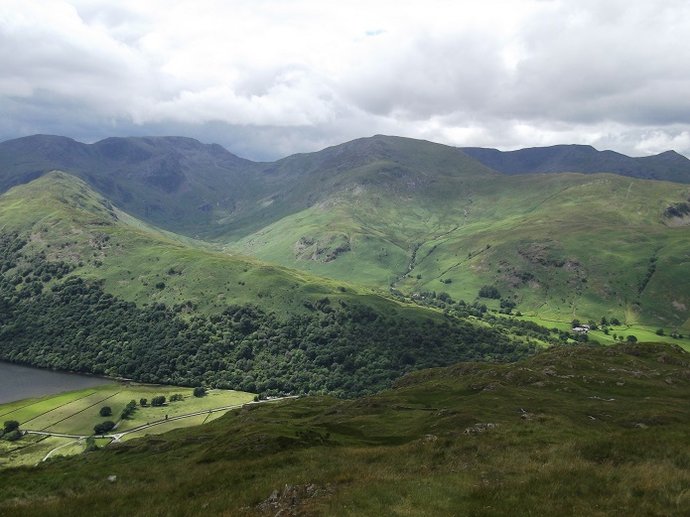 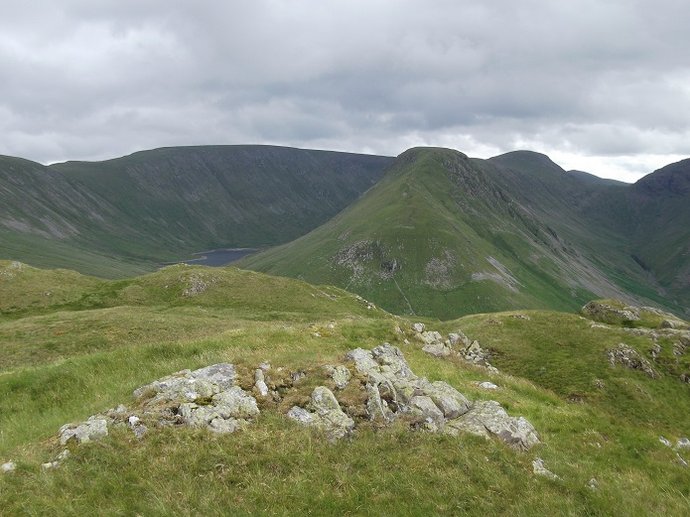 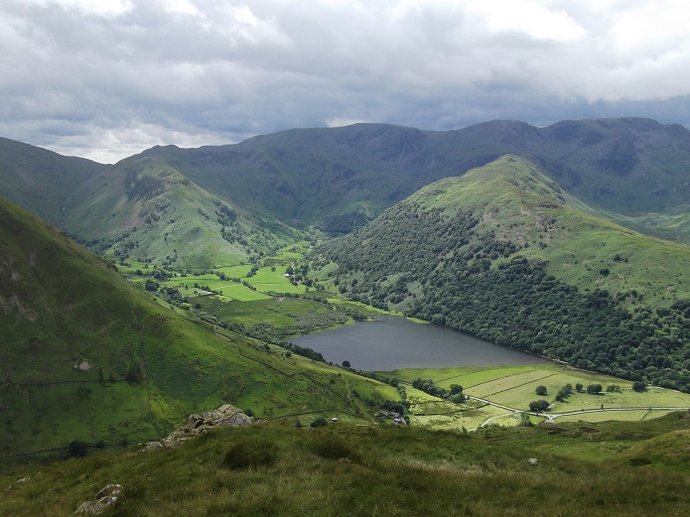 Over Brothers Water from Brock Crags 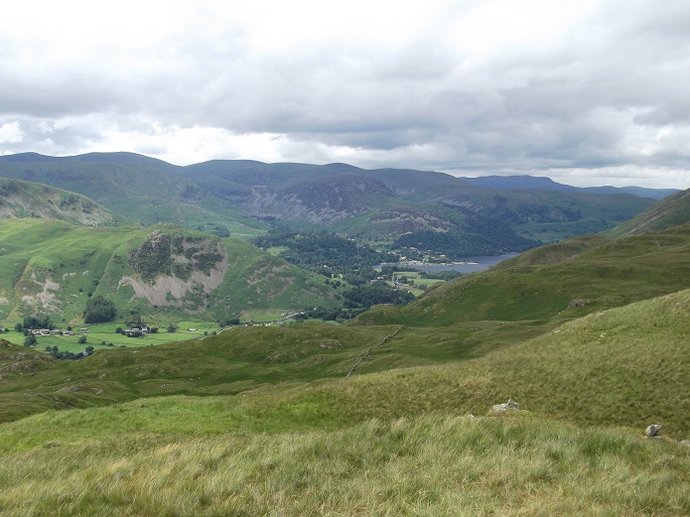 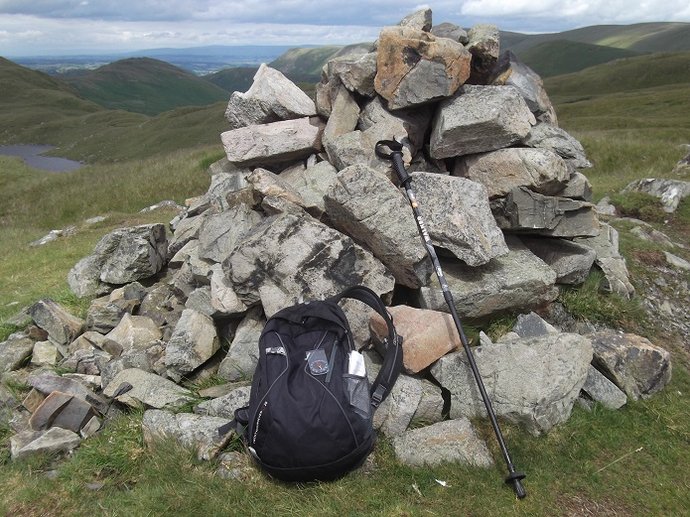 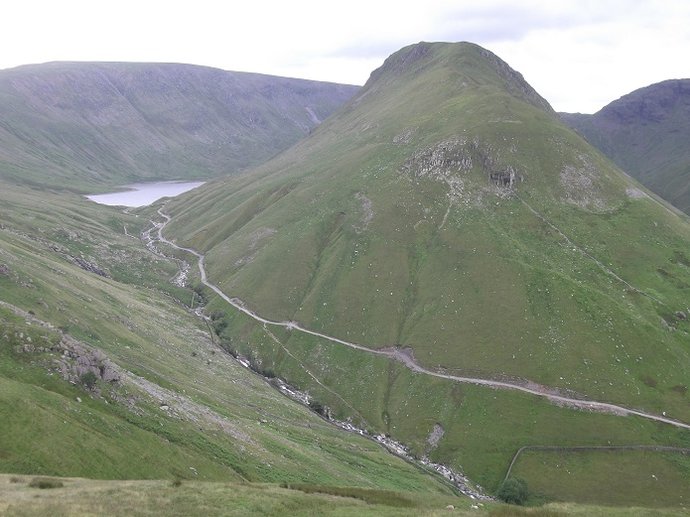 Gray Crag (even steeper than it looks here!) 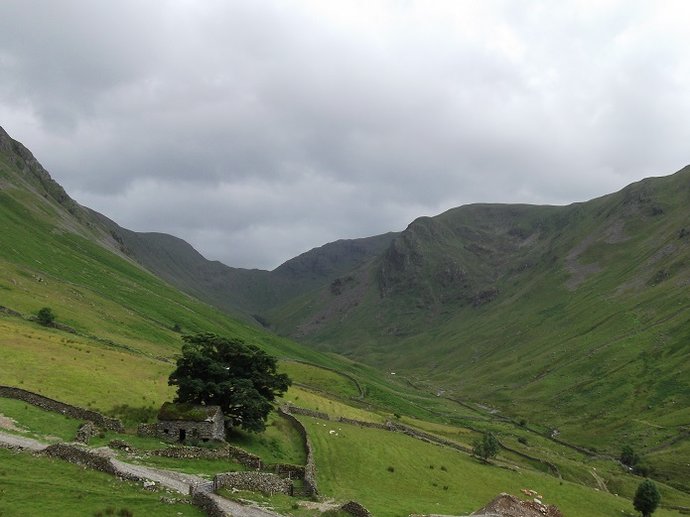 Plotting everything you do on WalkHighlands makes it temptingly easy to get a bit self-indulgent looking back at what you've done… it had taken me exactly 50 walking days, 525 miles, over 55000 metres of ascent, and almost all of them had something to enjoy, most of them an awful lot. My favourite day had been one with just a single Wainwright, on Great End by the most beautiful of routes (http://www.walkhighlands.co.uk/Forum/viewtopic.php?f=9&t=44780); my least favourite a very long wet trudge around Martindale with nine of them, the very day that had so put me off coming back to Rest Dodd (http://www.walkhighlands.co.uk/Forum/viewtopic.php?f=9&t=24950). The longest day had been an epic baking-hot roller-coaster around Ennerdale, as more sensible people sat watching Murray's first Wimbledon win; the shortest day a standard little visit to Seatallan, the day I officially ran out of things to say on this site about hills that everyone else had climbed, by the same routes everyone else had climbed them…

Next: just a few of the lesser Welsh 2000s to finish off, possibly a dabble in the last few English Hewitts that have been sitting untouched on my map for the last couple of years, walking somewhere in all of our National Parks. And plenty more days among the Wainwrights, now with the benefit of knowing everywhere, if knowing that it's so far only a very little bit...

. Good route you left yourself that.

Congrats on completing the Wainwright's poppiesrara

and a great report to boot

Re The Nab, yes, who would want to cross over that lot multiple times I wonder

Congratulations on finishing the Wainwrights

. Some nice light-and-shade photos in there, and probably one of the quieter corners of the Lakes. I had no idea where Brock Crags were but I must have passed within a few minutes of them as I've come down the path that goes past Angle Tarn before.

Looks like a relatively simple (if a bit damp) task to mop up the rest of those Hewitts, although it sounds like you're going to brave the misery of Cefn Gwyntog before then

Well done Poppie, Brock Crags is a fine little top to finish on.

As interesting, entertaining and modest a write up as always P. Congratulations on completion of the Wainwrights and what an excellent way to 'celebrate' with a moment of solitude in a wonderful spot close to home.

Completion is a great achievement that we on WH may sometimes take for granted a little bit, because so many are working toward it, counting down and a good few achieving it too we see it and discuss it quite regularly; but looking back over your 50 days, 525 miles and 55000 metres of ascent it is an outstanding effort by any calculation

Thanks very much, all!

Big congrats and a nice route to finish.