Before I come to the description of this walk, let me say a few words about what got me started to do hillwalking in Scotland, and the important part Beinn Dorain plays in this.

My first trip to Scotland was in 2002, for a rather unusual reason. The year before, a friend of mine and I made a trip to New Zealand. The bonus miles we earned for this trip were sufficient for a flight to any destination in Europe. To make the most out of it, we chose the airline's most expensive flight from Stuttgart (where we both studied aeronautical engineering at the time) to any city in Europe, and the winner was ... Edinburgh!
We both knew enough about Scotland to deem it a worthwhile destination, booked the flight, and made a two-week roundtrip to see most of the country.

Needless to say that I was enthusiastic about Scotland and came right back the year after to walk the West Highland Way (about which I had read in the travel guide book) with another friend.

This was when the Munros really entered my mind. I had read about them the year before, but even more so along the WHW - there was a poem about the Munros in one of the hostels, and I think the information panels about the Tyndrum Hills already existed back then. The decisive moment, however, was when we left Tyndrum on a clear early October morning towards Bridge of Orchy, and Beinn Dorain slowly came into view and rose to full majesty. I immediately fell in love with this mountain, and I still love the sight of its perfect slope which seems so steep and so hard to climb. My first view of Beinn Dorain back in 2003 (scanned from slide - yes, there once was such a thing as slides...)
((i've uploaded the photos now until my account is "approved" so that I can use the BBCodes of my photo hosting provider. I'll remove the uploads then.))

Arriving in Fort William at the end of the WHW, I bought Cameron McNeish's book "The Munros" and soon was hooked on the Scottish hills by looking at the photos and reading the descriptions.
After that, nothing happened for a long time. I finished my studies, got my first job in the French Alps and for six years went up most of the mountains of beautiful Haute-Savoie that are accessible by walking.
During this time, I met my future wife who loves hillwalking as well, and we chose two weeks of hillwalking in the Lake District for our first holiday together, followed by a few days in Edinburgh.

The Munros, having been dormant in my head for all the years, awoke my interest again. This was further nurtured by another WHW walk in 2014, this time with my wife. We stayed two nights at Rowardennan and went up Ben Lomond on the very day Scotland voted against independence - the first Munro I ever climbed, entirely shrouded in clouds.

Behind Tyndrum, Beinn Dorain stunned me again, and my desire to walk the Munros grew ever stronger. 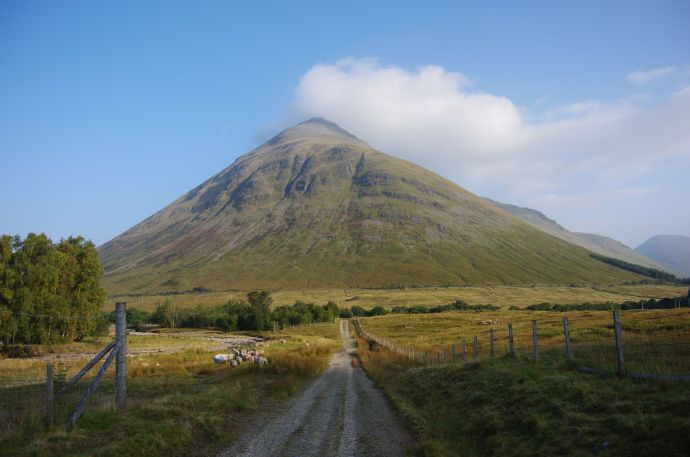 I had been joking about wanting do to all the Munros for more than 10 years by then. It is a crazy idea, living far away from Scotland in continental Europe (having moved to the rather flat Northern Alsace in the meantime), and not being able to spontaneously just go there when the weather is suitable.
This year I finally resolved to begin in earnest, and booked a trip to Scotland for June.

Naturally, the first Munro I wanted to climb was Beinn Dorain, and so I did.

The weather forecast for my week of hillwalking in Scotland was disastrous, low clouds and rain all the time, temperatures on the summits below +5°C. The first day was impossible and yielded nothing more than a valley walk around Buachaille Etive Beag and later up the Lost Valley, but for the second day, Scottish Mountain Weather Forecast showed some mercy and predicted some clear spells.
There was bright sunshine in the morning, and I left my car at the parking area in Bridge of Orchy to start the Munro undertaking for real.

Fine weather in the morning

I had seen the path starting behind the railway station twice before on my way along the WHW, so I already knew that the ascent would not be so steep as Beinn Dorain's slope as seen from Tyndrum suggested. I soon caught up with a group of three other hikers, one of which had already completed the Munros, and now the others "tag him along" to complete their rounds. It took him 30 years, even living in the UK. Once more I see the difficulty of my project - I will be nearly 70 in 30 years...

The gully to the left of the path is quite deep in places, and next to a small waterfall, an elderly couple had a break with a beautiful view into the valley. They had planned to go up Beinn an Dothaidh only, as the lady has bad eyesight and they can only proceed slowly. I was impressed, and the encounter gave me hope that it might be possible to do this after all, even when it will take 30 years.

On the bealach between Coire an Dòthaidh and Coire a' Ghabhalach, I made a short break and learned from the group of three that they would go on to Beinn an Dothaidh, Beinn Achaladair and Beinn Mhanach, then return to Auch Estate where they were staying, which sounded like a nice circuit.

I went on towards Beinn Dorain and soon found a faint path leading along the East side of the mountain below the summit, which I then climbed from the South. In the meantime, the clouds had come down to almost touch the rock, and a cold breeze had started. After taking the compulsory photos, my fingers were chilled to the bone, and I was glad to have packed woollen gloves when I left France at 25°C...

At Carn Sasunnaich, I made another short break to take more photos:

Looking North, there was another premiere - this was my fifth time visiting Scotland, and the first time I was actually able to see the summit of Ben Nevis, which made the day even nicer: Finally satisfied with the view, I went back down to the bealach and started going up the slopes of Beinn an Dothaidh, where I met the elderly couple again on their way back down.
From Carn sasunnaich, it could be seen very well that the middle summit is the highest one, which was not so obvious anymore later when I arrived there.

However, I first went up the East summit, more or less directly uphill. By the time I came nearer, it was completely covered in clouds, and the wind blew quite strongly. I waited for maybe 20 minutes in the shelter of a small outcrop until the clouds had lifted the few metres that were sufficient to liberate the East summit. Some photos, and on to the real summit. The wind became even stronger (and cold!), and I remembered with a frozen smile what Scottish Mountain Weather Forecast had said in the morning - "effect of wind on you: negligible". If the wind had been just a little stronger, it would have almost blown me off the summit (slight dramatization here)! Listen to the wind blow...

From here, the West summit looked a bit higher, so I went there, too, just to cover all eventualities, even though the map clearly shows the middle summit to be highest.
The way back down to the bealach quickly brought some shelter from the wind, and below the bealach, I could take off the bonnet, the coat, the pullover...

I arrived at the car very happy, having successfully completed the first real Munro walk (not counting Ben Lomond two years ago as a by-product of walking the WHW), and just as I had wished for all these years, Beinn Dorain was the first. I hope many more are to come, let's say about 279 of them... Looking back to Beinn Dorain on the way back to Tyndrum

20160614_wh.gpx Open full screen  NB: Walkhighlands is not responsible for the accuracy of gpx files in users posts

A great mountain to start the Munros with, I enjoyed your report and your pictures, glad you had some views and hope you have many more successful Munro walking trips.

Well done. Looking forward to the report of your next trip.

Thank you both of you for the nice welcome here!

Great pictures and story. I went past Beinn Dorain many times as a kid and as you say a place you get drawn to and have to climb. All the best