A GREAT WEEKEND IN GLENFINNAN 1

Just before you get to Glenfinnan on the A830 the road goes under a railway bridge. About 300m after this there is a turning on the left – not signposted, easy to miss – that leads over a bridge to a small car park. We turned right out of the car park and along a forest road towards Loch Shiel. After just over 2km the track swings round to the left and follows the loch side: another path leads towards to Glenfinnan. All of a sudden Katie’s face lit up

: she had spotted the rocky ridge of Meall a Choire Chruinn. 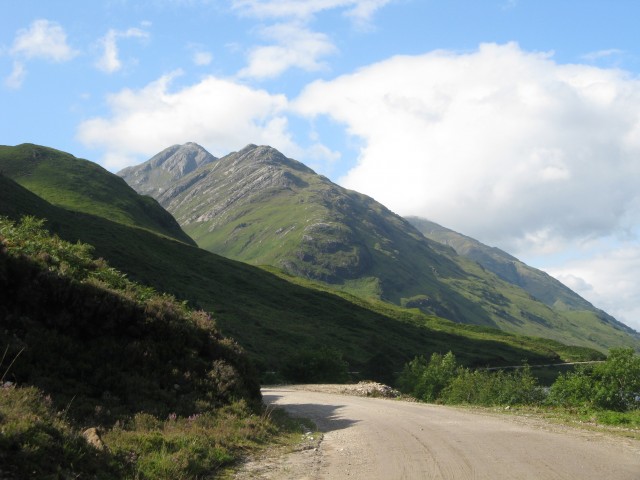 . Eventually we decided to return to the road and crossed the Allt Coire Ghuibhsachain by the bridge that is clearly marked on the map

. The rocky crags higher up provided some entertaining scrambling

but could be avoided on the right – but why would you want to do that? The scrambling opportunities continued almost to the summit of Sgurr Ghuibhsachain. 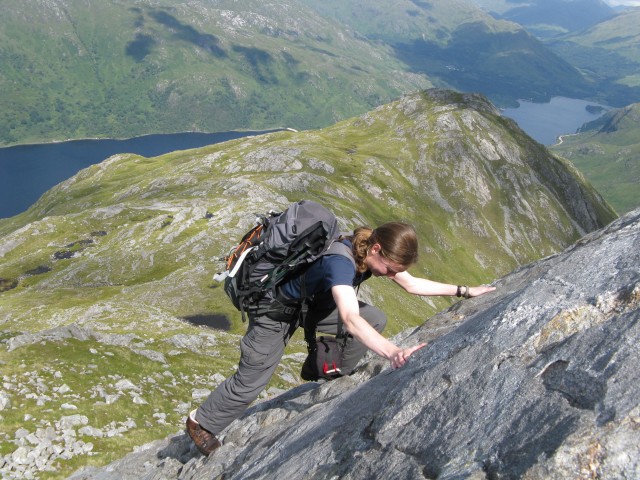 she wouldn't wave to me!

We sat at the cairn for a while picking out hills for future expeditions – there are an awful lot of Corbetts in this area – before going down steep rocky slopes and along past a lochan to Sgorr Craobh a’ Chaorainn. Katie took the direct approached and scrambled up some slabs to the summit and I went round to the left where another short scramble led to grassy slopes and the summit cairn. From there we dropped down N along the ridge to Sgorr nan Cearc, contouring round Meall Doire na Mnatha. Then headed for the buildings at Callop, a very boggy descent and quite hard going.

Try to find an alternative! Such as going over Meall na Cuartaige.
Once we got to the track a short walk saw us back at the car park. We sat in the sun reading the paper for an hour

or so before putting up the tent on a nice patch of grass near the river.

Re: A great weekend inGlenfinnan 1

Good to see a report on these hills. Looks like you had a good day on them. I remember doing Sgurr Ghuibhsachain with my dad and sister when I was about 15 - they avoided the scrambly bits, while I managed to get stuck on a slab somewhere! Seem to remember there was a very prominent vertical finger of rock nearby.

For some reason we missed out Sgorr Craobh a’ Chaorainn, descending the glen to the east instead. Something I will never forgive my dad for!

Re: A great weekend inGlenfinnan 1

That ridge looks a great way up.

When I did these hills they were felling trees so I could'nt walk around the corner.
Ended up walking up past Callop and up the Meall na Cuartaige ridge.
Two nice hills mind you.