Closing the door on the Fannaichs

Closing the door on the Fannaichs


There’s a sense of satisfaction in getting something tangible finished: re-decorating a room, weeding the vegetable patch, sorting out shelves in the garage. On the other hand, a sense of relief is also possible when you complete something, grateful in the knowledge that it doesn’t have to be experienced again: commuting on the M1 or M6, kowtowing to an incompetent boss.

Over the past few weeks I’ve had mixed emotions about completing the Cairngorm Munros and then knowing I’d visited all those that lay to the east of the A82. Getting close 250 had also made me wonder if that too would feel like a milestone reached. But, before I can think about how I’ll feel if I ever Compleat, there are a handful of minor “sets” that I can look forward to drawing a line underneath: Knoydart, Skye, the inevitable Fisherfields, and the Fannaichs to name a few.

Two bites at the Fannaichs in recent years had seen five of the nine summits visited in a variety of conditions: benign, swirling snow, thick clag and once a driving wind that even drove the redoubtable Fife Flyer from the hill in defeat. I didn’t know how I’d feel after seeing off the western four: relief or satisfaction? So, to find out, I drove north the evening before and stretched out in the back of the car, out of the reach of the midges that would inevitably be lurking the next morning.

Well that’s what all the emergency signs on the way north were telling me on Monday evening. And to cap it all, MWIS only promised a 60% chance of a cloud free Munro in the north-west.

But optimism ruled – and was repaid in spades.

Early morning sun on Sgurr Breac and the Druim Reidh

With midge net on and most things packed, I emerged from the car at 5.30am the next morning. Early sun washed across the northern crags of Sgurr Breac and the slopes of the Druim Reidh while I enjoyed the solitary silence. Fortified by a second mug of tea I strode briskly along the track leading to the eastern shore of Loch a Bhracin, trying to leave the wee beasties behind. Once through the woodland detour and across the bridge, I felt it safe to see things without the sheen of pale grey mesh.

I declined the opportunity to cross the Allt Breabaig at what masqueraded as a ford, and pressed on up the western bank: it was far too early in the day to get wet feet. An easy boulder-hop emerged a few hundred metres further upstream and then it was just a case of heading up on a rising diagonal across some rough ground to reach the track above. 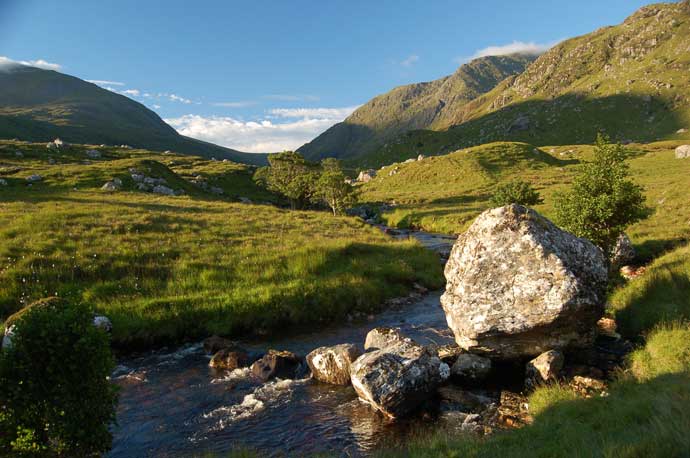 Shelter at the bealach at the head of the Allt Breabaig

The walk up to the bealach that leads over to Loch Fannaich was a long and gentle one: just over six kilometres to gain three hundred metres in height. In the early morning shade it was a comfortable start to the day. The pull up to Cadha na Guite on the other hand, was a steep, pathless thrash. There was something vaguely resembling a track at the beginning but that soon disappeared and it was a case of simply picking the easiest line. I’d opted for the biggest of the four, Sgurr nan Clach Geala, to begin with: a hope that it would make the day easier.

Any stress or pain from the climb up the final ridge to the top of SnCG was alleviated by views into Coire Mor on one side, and away to An Teallach and the Torridon giants gradually opening up on the other. To be fair, the clamber up these slopes wasn’t that bad anyway and, with the angle easing off near the top, it was a pleasant stroll in the increasing heat to reach the cairn and trig point.

Looking across to An Teallach from Sgurr nan Clach Geala ...

... and the other way to the Beinn Dearg group

After watching the cotton wool clouds drift across the distant hills for a while, it was time to set off for what was going to be the easiest top of the day, Sgurr nan Each. Looking down toward Sgurr nan Each before leaving SnCG

At this point, excuse a digression on Munro criteria. Sgurr nan Each is a fine little summit, an airy one with the cairn perched precariously. It’s clearly the highest point on the descending ridge that stretches from the higher Munro to the north toward Sgurr a Chadha Dheirg and Loch Fannaich to the south. Yet the rise from the bealach of Cadha na Guite is barely 110 metres. Surely it’s a “top.” Meanwhile, you look over to the cluster of peaks comprising An Teallach whose north-eastern component must sit with a contemptuous jealously. The extensive bulk of Glas Mheall Mor lies a little further away from its adjacent Munro and, at 979m, rises about the same distance above the intervening saddle: yet it’s a mere “top.”

Still, they are what they are: or at least until another set of re-survey results.

Another view of An Teallach - this time from Sgurr nan Each

Apart from the marvellous views to distant hills, the prospect that dominated from Sgurr nan Each was the spine of Sgurr Breac to the north west : a potential slog to be negotiated after dropping back down to just 550m. The descent wasn’t as bad as it could have been; steep but with enough solid footsteps and tiring on the knees rather than jarring on the toes.

After an initial short, steep stretch, the pull up to Sgurr Breac was nowhere near as tough as the prospect had seemed from the slopes of Sgrurr nan Each, and it was reached within the hour. Again, the Torridon hills popping in and out of clouds dominated the views, and the way ahead to the final Munro opened up.

The way ahead stretches across Toman Coinnich to A Chailleach from Sgurr Breac ...

... and yet another view to An Teallach

My own satisfaction of “three down: one to go,” and reaching 250, was dwarfed by the arrival of a young ten year-old completing his first Munro. Carrying not only a beaming smile but also his own pack, he was accompanied by both his father and grandfather: justified family pride all round with three generations enjoying the hills together.

We all met again after crossing Toman Coinnich and arriving at the final Munro of the day, A Chailleach. The wee man had set a cracking pace so the down-up-down-up took only half an hour, while giving the opportunity to consider which route to follow in descent. Someone recommended descending back to Bealach Toll an Lochain then contouring round to the Druim Reidh before dropping down to meet the outward path. The more aesthetic alternative appeared to head down the spur of Sron na Goibhre and down toward the Loch Toll an Lochain.

Opting for the latter, I followed the three generations of the new Munroist's family onto the Sron na Goibhre. With hindsight, and after reading the WH route description in the comfort of home, we shouldn’t have started our descent before the small rocky outcrop on the ridge. Fortunately the grass was dry and the ground not sodden. In wet conditions the steep grassy section at the top would have been treacherous, with little hope of stopping a slip. From below, and subsequently reading the WH route description, the best and safest descent begins after the cluster of rocks, not before them. Once across the Allt na Goibhre, the tracks of an ATV led down to the loch and the return by the shore to the boat house and bridge. It’s been easy and quick to type those few words, but reality was far different. It seemed to take ages before they even came into view, never mind reach them. To this point, enthusiasm for the day and the surroundings had kept me going: a sense of footsore weariness now began to take hold. After every inlet and twist of the shoreline another emerged round the corner in a never-ending attempt to elongate the day.

Finally, the eastern end of the loch hove into view and the end was in sight. Not before realising that the very last stretch from the bridge to the road was uphill. It may only have been thirty metres, but that was enough.

At the end of a thoroughly enjoyable ten hour day, despite the final couple of miles, a sense of multiple satisfaction was definitely the order of the day.

The Fannaichs were finished; but not with a sense of relief. I’d be happy to go back and get views from those cairns that were caught in the clag.

I’d passed the 250 mark, although the next milestone -getting down to single figures – may take a wee while.

It’s always worthwhile snatching a great day out in a brief window offered by the weather when it could have been much, much worse.

And I could share the satisfaction of a young lad starting his own Munro journey – I hope he gets as much out of his next two hundred and eighty as I did from these four.

Re: Closing the door on the Fannaichs

Mummm ... I have a soft spot for the Fannaichs and these are wonderful photos of them - thank you! Congratulations on passing the 250 mark.

Re: Closing the door on the Fannaichs

Well done Nigel. Hope to do these next week. Will be wanting the views.