After a day of rain and cloud above Glen Elchaig, I let the weather and forecast persuade me into a lazy day. So I spent a morning and much of the afternoon around Strath Carron and Loch Carron. There was still cloud on the hills, but mostly-dry conditions at low levels and it seemed that the worst weather had already passed by.

I decided that the best option could heading into a bothy, ideally one that gave a head-start for walking the next day. There were several options, but the nearest and best looked like Coire Fionnaraich, on the direct route to two hills (and also in reach of Fuar Tholl). There were several other vehicles parked near Coulags Bridge when I arrived, though from gaps between the cars it appeared to have been busier earlier in the day.
I packed up and set off shortly before 6pm, following the signed footpath through a short stretch of woodland then ascending gradually close to the Fionn-abhainn. I met several others heading down the path, including a Kiwi mountain-biker on his usual route. 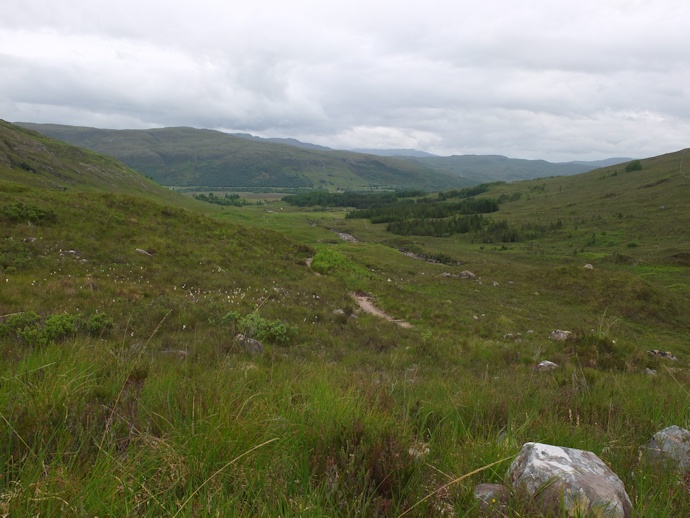 Back to Coulags and Strath Carron

The well-made path crosses the stream by a bridge, though it would have been no trouble using stones. The bothy is only half a mile further on, so I continued in order to get settled and sort out a meal. Coire Fionnaraich is a fine bothy, both for its setting and furnishing. There are views east to Sgorr Ruadh and Fuar Tholl (although their less dramatic sides) and south towards some of the lower Attadale hills. The neat stone exterior has plenty of good windows to let light in, with wood panelling on the walls and floorboards which are a good substitute for a sleeping-platform.
My modest needs for a cuppa and hot water to re-hydrate some food were met by a Trangia, with no need to investigate the impressive stove. But that looked capable of keeping the place warm whatever the winter weather. The bothy has two rooms downstairs, with two and a smaller space upstairs. So there was plenty of space for myself, another walker and two backpackers.
There's a smaller roofless building behind the bothy, presumably connected to its history as a keeper's cottage. There were some midges out that evening, but not enough to deter me from a bit of wandering to appreciate the surroundings, especially since the weather continued to look promising. A male ring-ouzel was pecking around outside the bothy, though my photo is through glass so only clear enough for identification. After a good night's rest, I woke early, having chosen an east-facing room. There was still cloud, but thinning out and with a base well up the hills, so I breakfasted early and packed up to set off before 8 o'clock. I didn't notice the Clach nan Con-fionn stone alongside the path, but soon into the walk there's a small cairn and parting of the ways. My route lay left, uphill, rather than continuing north (though there are plenty of good destinations that way too). The morning sunshine felt warm, so I kept a steady pace and gave the skies time to continue clearing. The path has more worn sections as it climbs, but also offered views of Maol Chean-dearg and the well-named Coire Garbh. About 45 minutes of walking brought me to Bealach a' Coire Ghairbh and a choice of hills. Both wore a cap of cloud, but looked likely to clear. With most of the day ahead (it was still before 9am), I decided on the Munro first and to save An Ruadh-stac, though both looked tempting in the welcoming conditions. 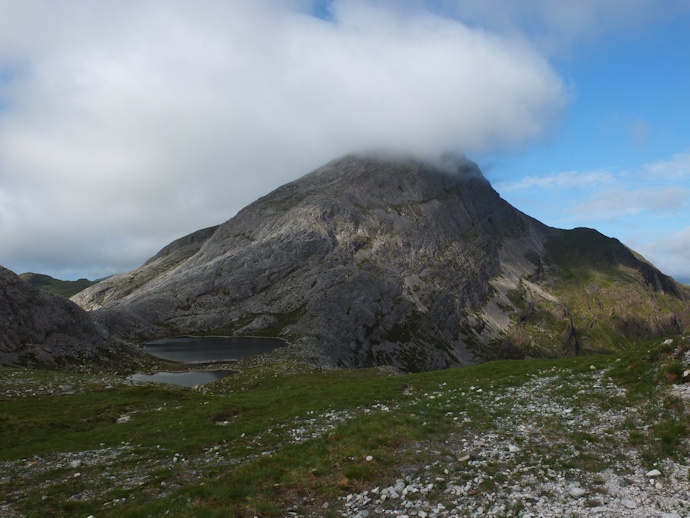 The path up Maol Chean-dearg crosses a lot of quartzite covering the southern shoulder. That includes a steep section of scree, but nothing to cause problems after I'd walked Ben Sgritheall a few days before. Then the path crosses a long lumpy, rocky shoulder (around point 757 metres) before another shoulder of red sandstone further up. Cloud still clung around the top, so I took a brief break and hoped. It only took about 10 minutes at the cairn for my persistence to be rewarded. Snacks were soon forgotten as the thin cloud drifted and cleared away, giving bright sunshine with glimpses and then longer views. There was no need to shelter at the massive cairn, but it gave somewhere to leave my pack as I wandered to edges of the rounded top. Many of the surrounding hills seemed to have similar conditions, rolling away white coverlets of cloud and starting to bask in the morning sun. 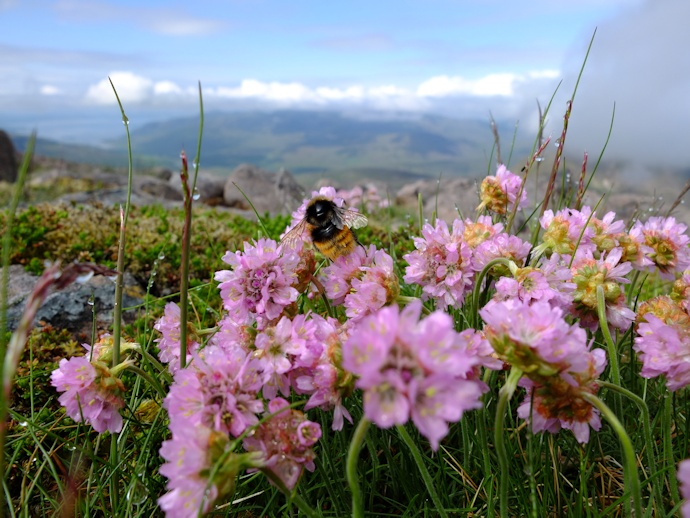 I hung around for about 30 minutes, though the higher Torridon ridges to my north were reluctant to show fully. 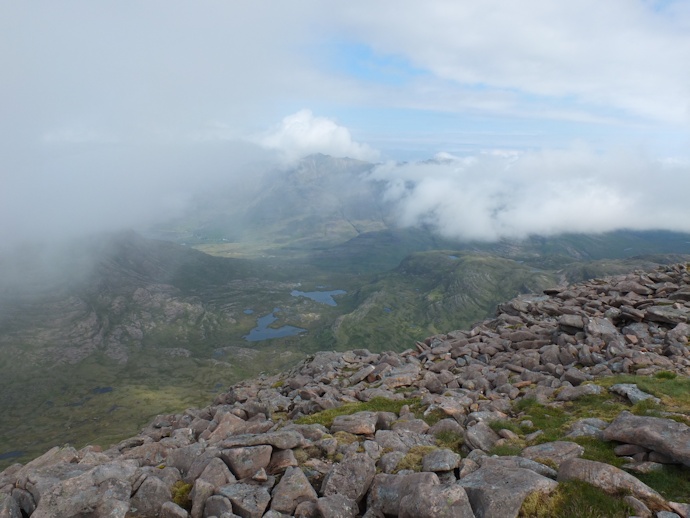 Eventually I retraced my steps down over the sandstone and quartzite, displacing some of the scree path (always better to ascend than descend). The next stages involve even more bare rock, but all quartzite, so I was especially glad of the dry conditions underfoot and overhead. From Bealach a' Coire Ghairbh I turned left to Bealach an Ruadh-Stac. Then I tried to keep to the slight ridge that runs southwest, though the slabby quartzite outcrops are more work than following the edge of Loch a' Mhadaidh Ruadh. But it did give a good look at the slopes ahead, which had appeared formidable so far, and chance to check my footing on the rock. That turned out to be surprisingly good going, with a lot of grip from my boots on the dry stone, even on slabs with a lot of tilt.
Once onto the hill itself, I found plenty more such gradual slabs and a helpful path, when I chose to follow it, following the eastern ridge. This is still quite steep going, but untechnical, at least in the dry. Like most hills, you only see the most imposing sides of An Ruadh-Stac from its neighbours, but it is surrounded by plenty of views to excuse taking breaks during the ascent.
The cloud gathered into a high ceiling, well above the hills but keeping me in shade for the climb. So I didn't linger for so long at this summit, also considering the risk if a shower fell while I was still up high. I met another walker during my descent, giving the excuse to pause again. Then I varied my upwards route slightly by visiting Loch a' Mhadaidh Ruadh, finding it gave good views with easy going compared to the bare quartzite outcrops. Then I recrossed Bealach an Ruadh-Stac, but this time heading uphill. This adds a little extra ascent, but varies the route and - like a lot of smaller hills - gives views of the higher ground around. Even a look through at Liathach and Beinn Eighe across Bealach Ban to the north. View of the Torridon ridges

I've been uncertain about venturing onto the really challenging hills, but after a couple of walks on their margins the temptation continues to grow. I descended down the broad southeast ridge, which turns to open moorland further down. Then turning more east for a descending traverse of Leathaid an Aon Bhothain above the bothy. I met a Californian walker during this stage, taking his time. After all, the Scottish hills were even more of a contrast to him than they are compared to my native East Anglian countryside. But he seemed to be coping, so I carried on over wetter ground to rejoin the Fionn-abhainn path. That brought me easily back to Coulags and my car. 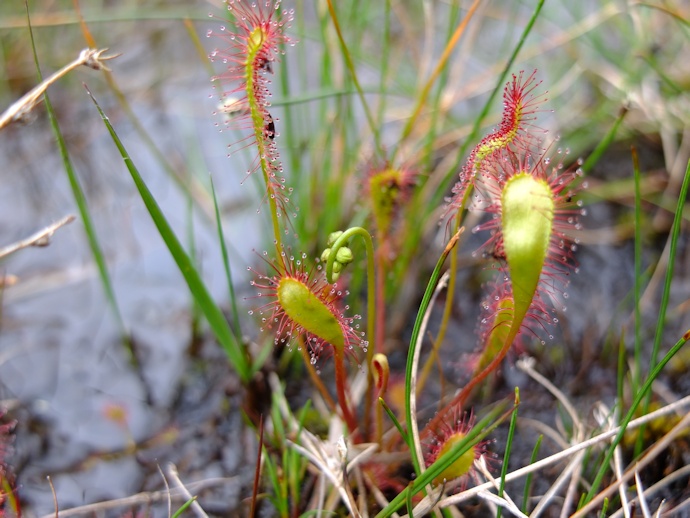 I've since discovered that a small run-of-river hydro scheme is going to be constructed on Fionn Abhainn in the coming year (target completion date September 2017). This isn't going to prevent access, but I'm glad to have done the walk this year rather than during any visual disruption or machinery activity.


our_route.gpx Open full screen  NB: Walkhighlands is not responsible for the accuracy of gpx files in users posts
Time includes 13 hours spent at the bothy overnight.

Cheers, I was delighted with the splendid weather and feast of colours after a very grey and drab-green walk 2 days before this. I can't claim to be observant (I missed Clach nan Con-fionn, after all), but some sights almost demand a photo.

Thanks, writing up walk-reports is a nice way of reliving walks (though with less weather, wheezing or risk of falling in a bog).