After my last report (Schiehallaion 22/06/10), which was heavy on words and light on pictures, this one should hopefully address that imbalance.

Jessica had the Friday off, so we had planned a long weekend in Glasgow. The plan was to get one days walking in on the Saturday, with Ben Chonzie being the eventual hill of choice. Other options were considered but they would have involved a lot more driving for Jess and her then needing to entertain junior for several hours while they waited on me to finish my walk. At least with Chonzie being the mark, Chase could tag along and bag his 2nd Munro.

We set off from Gartcosh just after 10:00 and were at the Loch Turret Dam car park shortly after 11:30. The weather was near perfect. Clear blue sky for miles around and a gentle wind blowing down the loch. We were changed into our walking boots, sun-blocked up and our lunch packed into the backpack just before 1200. 01. Chase and Daddy, ready to set off from the car park. 02. Chase practising his scary face, in case any Gruffalos are about.

The walk along the reservoir was pretty easy going. We just took our time and enjoyed the sunshine. Looking out for Gruffalos took our minds off the seemingly never ending track. 03. Chase, off on his merry way along the track.

We reached the far end of the reservoir about 1330. This was where we got a proper look at the climb ahead of us. . 04. Chase with his first proper view of the climb ahead.

We decided that this was a good place to stop for some lunch. 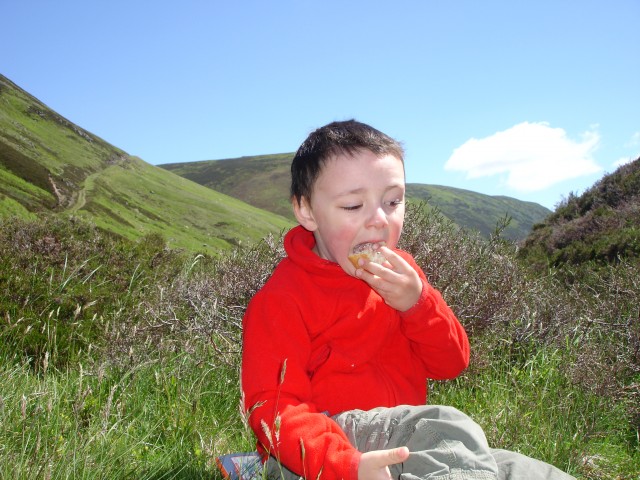 05. Chase having lunch in the heather.

We set again about 1400, following the track as before. Chase decided that we needed to stop at the last of the waterfalls crossing the track to throw some stones in the water. Well, it was hot and sunny... At the end of the track, there are faints tracks through the grass and heather. We followed one that was heading directly towards our "descent route", picking up another that took us across to the foot of the gully, on the left. 08. Chase climbing up the gully.

Chase did pretty good on the climb, but some of the heather and grassy knolls did slow him down. He was pretty tired by the time we reached the top of the gully, and another 15 minute rest was needed before we pushed on to the summit. 09. Chase, refusing to look at the camera. 10. At the top of the climb, looking back along our walk in.

We followed the line of fence posts up the last of the climb and made it to the summit just before 1600. A few others were already there; They had set off from the end of the track at the same time as we had, but had opted for the other (easier) route to the summit. That's what happens when you give young children choices. The walk back down was pretty straightforward, apart from a few sections where Chase needed some help, due to the thicker heather and a some loose footings.

The following pictures should be enough to cover the walk out... 12. Heading back down, following the fenceposts. 14. Chase at the top of our route down, the way home behind him. By the time we got back to the track, we were both pretty worn out and Chase decided that the best plan would be for him to take point, from the vantage position of my shoulders. My shoulders and knees did not agree.
We came to an agreement...
He sat on my shoulders on the up-slopes; He walked, to give me a rest, on the down slopes.
This worked well, and we were back at the car park, to meet Jessica, for 1900.