Macdui and Carn a Mhaim by chance, not design

Macdui and Carn a Mhaim by chance, not design


After our cycle back in from An Sgarsoch and Fhidhleir to the Linn of Dee car park, we restocked our packs, loaded a second tent to use as a store for gear and headed straight off again towards Derry Lodge. Pushing the bikes up through the trees then down to the bridge,,before taking a left and heading off towards the lodge. John said this would take 25 mins,,but as I've oft repeated, I'm a terrible cyclist on these tracks and as it got rougher,,I got slower, pushing the bike pretty much for the last half.

I arrived at Derry Lodge some way behind John (I'd seen what I later found out to be Bob Scotts Bothy in the trees and had to ask a couple on the track if a guy in green, on a bike had gone down there, I had no idea what the lodge looked like lol) Picked out a camping spot on a clearing to the left of the footbridge, plenty room for both tents and bikes etc and lovely views up the glen. With a good view of the incoming rain showers,,and there were plenty,,not heavy,,just there! Mr Tomsie, the kids entertainer, in his GREEN trousers

As the showers came and went so our decision to bring another small tent paid off,,cooking gear, packs and wet stuff could be stored in there, keeping the 3 man Banshee for sleeping only, fab stuff. It was bright and sunny between the showers and we were able to relax a bit, cooking dinner, wee drinky etc, watching the mad chaffinches do their best scrounging lol

The path from Derry Lodge is fairly broad and level, once over the mud, and we made our way easily into the trees. The track towards the Lairig Ghru

We were able to cross the river south of the Luibeg Bridge, just a couple of rocks worth. With persistent rain, and no sign of the weather clearing, we plodded up the Ghru, easy enough going but pretty wet. Once or twice the ridge line appeared,,then just as quickly, disappeared again. Devils Point under the low cloud Flight of the concord,,,ok heron,,or crane,, heck, I don't know

We stopped once or twice, seeing the path on the ridge to Carn a Mhaim above us, discussing whether to cut our losses and just head up there. Back down the Lairig Ghru,,ever hopeful of brighter skies

Opted to push on a bit further, giving the weather another chance to lift. Just as the Pools of Dee came into view, we had yet another discussion. Is bagging these so important that we would push on in these conditions???? Although, I battled with this, we then decided, as we had already undercut the Macdui summit, we would strike out up the steep side of Big M, turn back to the summit and descent off Carn a Mhaim. Damage limitation lol

The climb up the side of Macdui was steep, wet, slippy and knackering, but after about 1hr 40, it levelled out as we headed East to pick up the path to the summit. I think the rain had stopped here but it was blowy and visibility was pretty poor, ideal conditions to catch a glimpse of the Grey Man himself, its amazing how the mind plays tricks on you,,,,did that rock just move??? 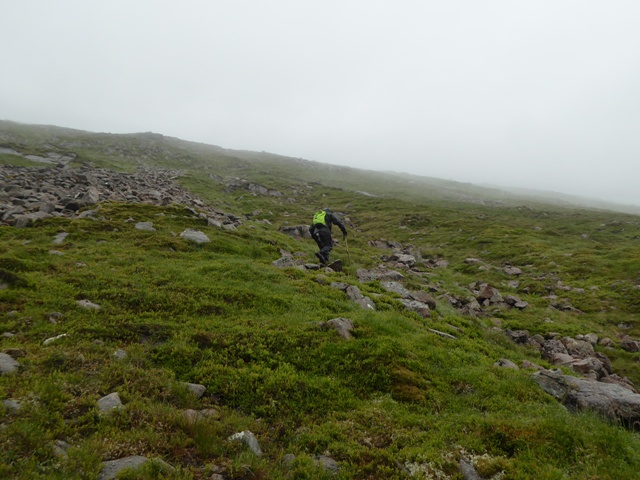 We reached the summit cairn and trig point, the summit is littered with small shelters, cairns etc. Looks like a small stone age village sprung up at some time. 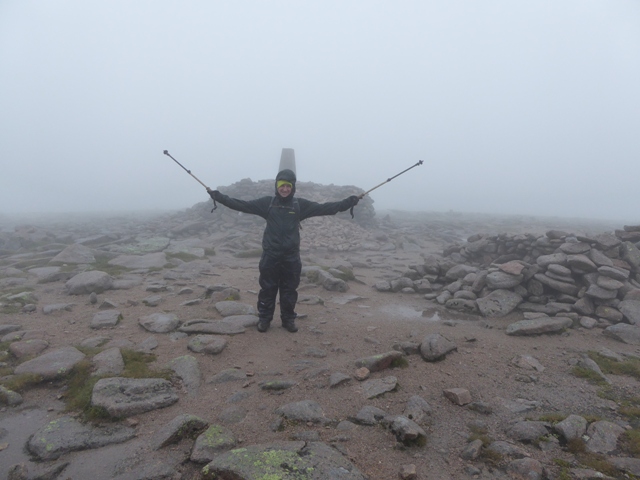 The misty trig and the grey man of Beinn Macdui!,,oh sorry,,its John

There is also a cairn with the circular "Doulton" way markers, pointing towards major, not so major and otherwise unheard of points, tops etc, in the distance, a distance we could see no more than 20-30 mtrs in lol so we had to take its word for it. On the way off, we met a chap who had been at Corrour the night before with some friends, seems he was the only one on the hills today but they were all heading to camp under the Shelter stone that evening. Said our goodbyes and headed on down Heading off on the boulders

The route to Carn a Mhaim involves heading SE then East to avoid some serious crags, but covers a lot of boulders . Came a cropper here when a big boulder toppled underfoot and spat me out on the rocks...on thr way down i honestly thought my arm was heading down between two rocks and waited for the snap. Thankfully, the only damage was a skint and battered shin. Turned South again to the Cothaiche burn and then to the beallach below, before rising gradually on a good, rocky at times, path towards Carn a Mhaim. The weather cleared on the way down here and we could see the hills beyond now including our initally intended hills to the West, but with the gusty breeze, rain showers were being blown down the glens and heading straight for us at a rate of knots. So, hoods up, hoods down,,hoods up was the order of the rest of the day. Carn a Mhaim appearing from the clouds 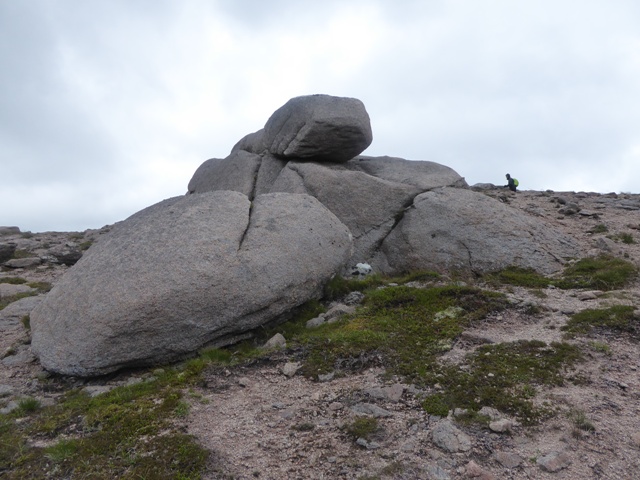 Some big rocks and a little John

We reached the summit under yet another shower. No hanging around, headed off down one of several paths leading off the rocky top. Up to the summit of Carn a Mhaim

The weather was improving all the time now, as we lost height. Seeing the tracks below we picked our way down as others came along from the L Ghru to the right, and up the track from Derry Lodge etc. We watched as they made their decisions re crossing the river or using the Luibeg bridge, some trying one, before opting for the other. Zoomed in shot down to the tracks, groups deciding on river or bridge crossings lol 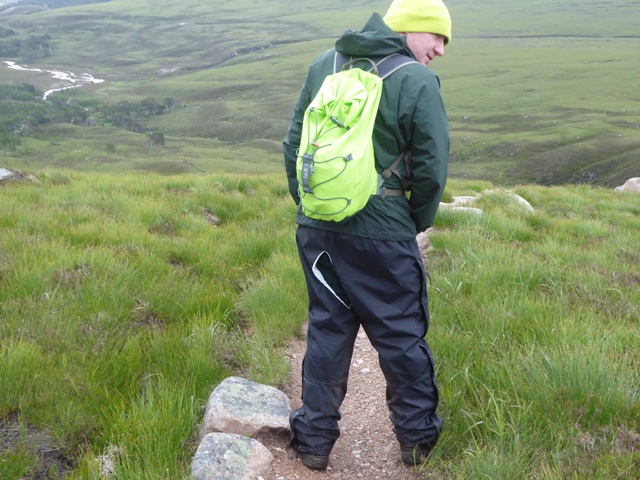 Think Johns waterproofs have seen their last,,even the gaffa tapes come off lol

We watched one group return from the river and head for the bridge so decided it must have risen during the days rainfall so chose to do the same, straight for the bridge. The ground before this is VERY muddy and tricky to negotiate without getting a mudbath, but having made it through, we crossed over and climbed up to the higher path which then heads down to the trees and on to the outward path. Down to the bridge before heading back to the camp.

This wasn't the day we originally planned and although a bit disappointed at not getting the Braeriach 4, we still managed two hills, including the second highest Munro.