After yesterdays slight "change of plan" I was left with Derry Cairngorm in the area, an outlier and a must from this side I think, as we were already there.

With the weather improving, we managed breakfast away from some midges and under the trees. John had been having toe trouble and was still having issues, so we opted to head up Glen Derry and return the same way, minimising any steep downward paths etc. We crossed the bridge at the camp spot, there is a path on the Lodge side of the river but it rises higher and isn't necessary (the signpost before the bridge misleads a bit here I think as it simply points left and right on THIS side of the bridge, best to cross over and head up through the trees) Heading up to Glen Derry

This was a lovely walk, up a lovely glen. The gradient is relaxed and it was easy to just saunter along, taking in the day. No rain and very little threat of any coming our way. Clouds were high but we still kept our eye on them

Views ahead to Beinn Mheadhoin were fab, we could clearly see the barns and it gave me a chance to fiddle with the huge zoom on the new camera. Arty shot on the way up the Glen

Seeing Mheadhoin ahead gives a good idea of how far you have to go up Glen Derry, as you can see clearly where you then bend left to head for the beallach. We then met 4 walkers coming down the glen, the last one we realised was the same guy we met coming off Macdui the day before, so they had come from the Shelter stone. The climb up the glen to this point went much more quickly than I had anticipated. Zoomed in further on the barns of Mheadhoin

The crags under Mheadhoin are impressive and glistened from recent soakings in today brighter weather. As we turn North East, we reached a small bridge over the Etchachan, asking John to stand on it and jump for a photo opportunity didn't go down too well,

it was pretty windy here and on reaching the bridge,,its only about 18-20 inches wide, so well done for getting both feet in the air John lol. As Van Halen once said,,,Might as well 'Jump'! John checking out his previous route

With a slightly steeper path we could now see the Hutchinson Memorial Hut in the coire above with some residual snow in the Forked Gully above that to the left. We had some lovely weather now, blue skies and high cloud. Up to the Hutchinson Memorial hut

We stopped in at the hut and read a few of the diary entries, small place but would be a cosy shelter on a bad night. Looking back down from the hut to our ascent path Up to Forked Gully

Leaving here, the path steepens further but is still good going underfoot. Chipped away and made it to Little Loch Etchachan with its bigger brother beyond. Watched as what looked like a gull buzzed a much bigger bird over the loch then up towards Derry C. Definitely a raptor of some sort but too far away to see more than that.

John heading past Loch Etchachan with Macdui beyond

Heading round the loch, we found a small cairn and headed off towards the West side of the hillock of Creagan a Choire Etchachan. Fairly rocky going as we contoured round, spotting the actual path a little further to our right we just headed over and picked it up eventually. Heading for the summit of Derry C

With a rise of little more than 100 mtrs over a distance, this was easy going and we reached the summit with no problems. Weather was great, blowy but that kept anything wet on the run. 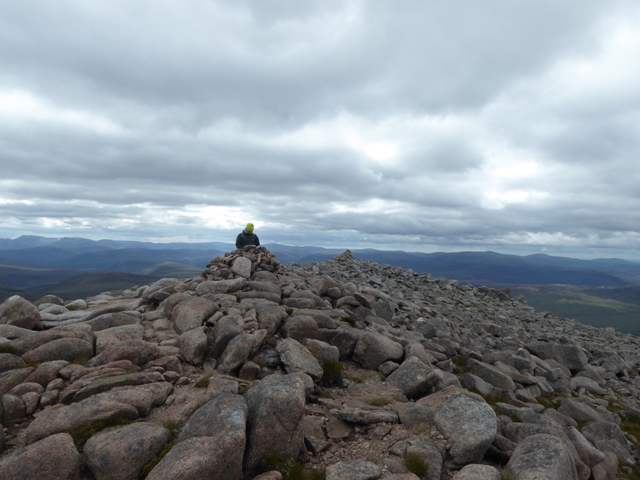 John at one of the two cairns Our initial plan was to return by the same route, due to Johns toes (he was in his mudclaws for this hill) But since we were already effectively a fair way into the direction of return, as the crow flies, he suggested we just carry on down the 3 bumps and back to Derry Lodge, so, off we go. Initially after a bit of a boulder field, this was a very pleasant descent.

Nothing off piste, no steep bits to speak of, heading down and over to Cairn Crom and South East to Craig Bad an t-Seabhaig before a steeper descent through thickening undergrowth and down to the bridge over the Derry Burn and our camp. Heading back down to the tents,,can just pick one out behind the dead tree lol

We broke camp, packed up and headed back out to Linn of Dee. The cycle back folks...35 mins and I cycled most of it,,,must have been a glitch lol

A cracking solo hill on a lovely day. Pleased to have go this from this side too, definitely a good route to use.

That's me down to 13 Munros now, wondered at the superstitious aspect,,13 to go,,,would something go wrong,,,,,who knows lol