I've driven past these two hills dozens of times and I figured it was about time I climb them. Decided to do the route suggested here on the site. Got a late start around 1:30 and the layby was pretty full. Nevertheless, I only met a few people coming down from Ben More on my way up. It was steep, steep, and more steep. Very tiring on the legs. Found a path for pretty much the entire way up and it improved as I reached about the halfway point. It was some effort to get up to the summit but after about 2 hours and 20 mins I was soaking in the fine views. The distant hills were all in silohouette but looked impressive needless to say. The view toward Loch Tay was especially nice. I had the summit of Ben More to myself and so after a good rest and a tricky self portrait I headed down to the bealach to Stob Binnein. Met another climber on my way down who had done Ben More and Stob Binnein but was reascending Ben More

On my way up Stob Binnein my legs and lungs started to fade. Took more breathers on this hill, but finally made it to the top. At this point the clouds had thickened and the wind had picked up. Didn't hang around too long, so down to the bealach and off to the descent path into Benmore Glen. The descent path wasn't all that bad and before long I was back to the car, just under 6 hours, not bad considering how many breathers I needed. Met the guy who was reascending Ben More back at the layby. He was on some journey! Poor guy had cycled up from the south coast of England and had climbed several hills along the way. Guess he thought he was Superman, because he said that after camping below Ben More he was going to wake up, cycle to Fort William, and climb Nevis

All I can say, is better his legs than mine.

All and all a great day out with superb weather and views. 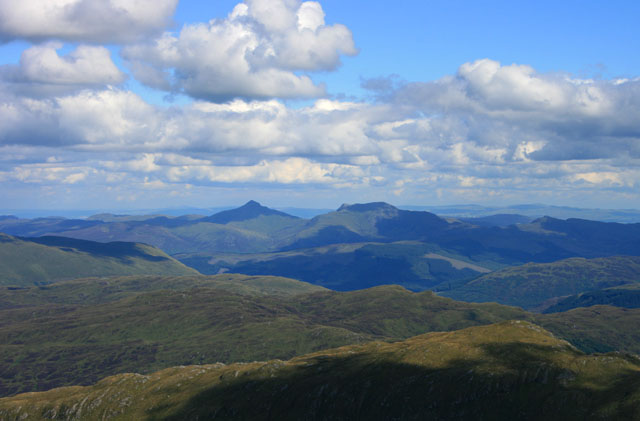 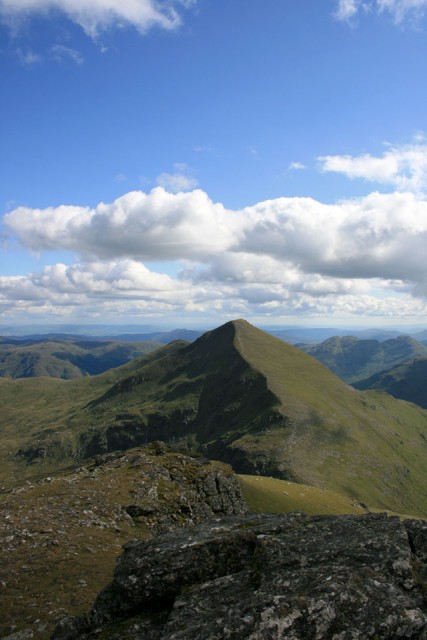 Nice report Stretch.
Looking at the first picture it would seem that the sun wash shining relentlessly, however there are some fantastic atmosheric shots of the darkening clouds above the surrounding hills and valleys. All in all you had good weather though unlike the mists I have been in lately.

Is that the Ben More giant surveying the landscape

Thanks Monty, you wouldn't believe how difficult it was to get a pic of the Ben More giant! Can't get anyone from St Andrews to accompany on my walks, so I have to try and set up the self-timer. There is a large drop right below the trig point so I had to try to run around the drop and get myself in place before the camera went off. Took 3 times to get it right

Grand viewpoints these - nice shot along to Loch Tay

Thanks for those pics, nIce to see the views I missed out on when I did these in low cloud in May.

I must make the effort to do more self-portraits. I don't carry a tripod and haven't been on many tops at the same time as other walkers so far, still plenty to do yet.

I done these two last Friday and got totally soaked. Cloud level was about 600m I think so no views at all.

These pictures look good . I'll go back and do them in better weather I think.

Great report Stretch. Hoping to grab these in the next week or two as on holiday from work. Not been out in ages so really keen to get back on the hills. Had these in my sights for a while so your report and pics have come along at just the right time. Thanks.

Jock, enjoy these two, but I think Alan and I will agree that your legs will remember them for a while

Lovely pics there Stretch. I hope you remembered to include all that running you did against the self-timer on the distance log!

The clouds may have rolled in on Binnein but this still knocks spots off the day I had on this pair last year. Quite a few unfortunate incidents befell me that day.

Thanks Graeme, I assume you mean that I should stop timing myself against the suggested times for walks or that I did this fairly fast? I thought it was taking me forever to do both hills, it wasn't until I made the descent that my long legs picked up momentum. Fully expected 7 hours for this, but it ended up like 5:50 instead. Any joy I had at doing this quickly was erased the following day on the Monadhliath nightmare walk

Good to see someone who has escaped from the clag

gaffr wrote:Good to see someone who has escaped from the clag

Sssshhh Gaffr, don't tell anyone that I actually floated down to the summit!