After staying the first of 2 nights in Cannich, I wanted to minimise the amount of driving for my walks. The forecast was OK rather than great, with cool cloudy conditions and a bit of rain likely as the day went on. But I was raring to go after a couple of easy days, so decided to try one of the shorter ridges nearby. This could ease me back into navigating properly in the cloud. Also, being a Monday suited access to the Glen Strathfarrar private road, since there would be no car access on Tuesday and reduced hours on Wednesday.

I was at the gates shortly after 9am, finding several other cars there before me. These stopped along the glen, leaving me to continue alone and park at the eastern end of the route for a 9:30 start. Driving further along the track might have saved a few metres' ascent, but it is level walking along the glen either way. I don't have or use a bike - the track would be ideal for that - but it's a pleasant walk, with lochs and river to one side and hills rising all around.

More significantly, I'd decided to start with the road-walking and go clockwise, saving the boggiest section for my descent. That should minimise the time spent with wet boots, a precaution that turned out to have been a good idea.

There were large herds of apparently tame deer in the glen all day, though one group did ford the river about half-way along, perhaps to avoid my approach. Deer grazing down the glen

Several trucks and other vehicles passed me in the glen, though I seemed to have the hills to myself for quite a while. There was a single blue 4x4 parked at the start of my ascent track, though no sign of the occupants for the next few hours. The gradual ascent is slow to grant views of the Strathfarrar ridge, but I could turn around for a look at the Mullardoch hills. These were also a good measure of the cloud level, which was roughly 1000 metres for much of the morning. 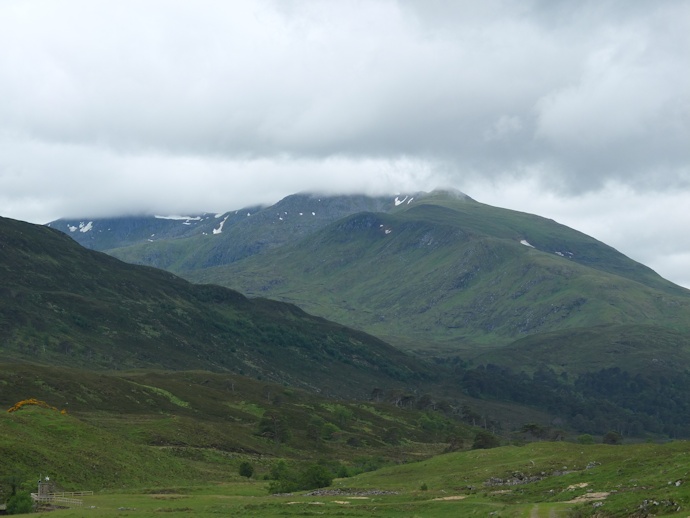 The western track (for ascent when walking the route clockwise) allows easy progress without being too intrusive. It runs just west of the Allt Toll a' Mhuic, flanked first by some steep wooded slopes then a cascade after about a mile of walking. I had an early break for lunch around where the track crosses the burn. The cloudy skies and overcast conditions didn't show things at their best, but there are imposing crags along the west of this corrie leading northward to the day's first Munro and Tops. Ridge to Sgurr na Fearstaig across Allt Toll a' Mhuic

Grassier slopes offer early access to the ridge, but I kept close to the main path up through the corrie. At least until I wandered off some fainter sections and cut more directly north beside a burn. That let me stock up on water and appreciate some of the moorland flora. The cloud ceiling closed in towards the end of my ascent, following a narrow but gradual path around the steep slope under the ridge. Then I left the path again to turn left. There's a brief narrow ridge, then broader ground. As the westernmost Top along the ridge, there are probably fine views when those are visible. But I just resorted to cairn photos for this and the next few hills. Wind and rain joined with the cloud, so I concentrated on taking bearings and pacing distances to keep track of my location and ensure that I remained on the correct ridge line to traverse eastwards. Sgurr na Fearstaig amid the mist

After the first top, its parent Munro involves a more substantial ascent and stony ground, which as usual felt more due to the weather being against me. The substantial cairn is close to a steep northeastern corrie and gave enough shelter for a second installment of lunch. During this stage, my only photos were a quick snap of each cairn (to record the times and confirm that I had reached them), trying to keep the camera dry beneath my jacket in the meanwhile. The next Top, Creag Ghorm a' Bhealaich, lies along an interesting stretch of ridge, not that I was appreciating the scenery very much. But it was good walking even in drab weather, especially once the rain eased off and I dipped beneath the cloud level at Bealach Toll Sgaile. There were even hints of views beyond the ridge, though I pressed on rather than wait and hope for more. I saw and started catching up one other walker on the west ridge of Sgurr a'Choire Ghlais. He skirted the edge of a boulderfield, which I ascended more directly, then paused at the western cairn. I met a different walker, up by train from Peterborough, who had more ambitious plans of continuing to camp northwest beyond the ridge. Then we parted to make sure of visiting both the cairns - and also trig point - that distinguish this Munro. Continuing the walk, I descended the east-northeast ridge of Sgurr a'Choire Ghlais. This drops away on its northern side, making it apparent that the cloud was clearing while I headed for the next bealach. Then there's a long gradual rise to Carn nan Gobhar, the last parts over boulderfield. A lot of this is stone-on-stone, so slightly more demanding than stone set into the ground, but proved no trouble, especially with the cloud helpfully staying above the summit. Although not very far overhead, so it formed a ceiling that capped the views for the remainder of my walk. From the cairn, the final Munro of the day lies southeast, but the ridge starts by heading east. I cut this part slightly short, with comfortable walking over short turf after passing the bouldery summit area. There is a narrow peaty bealach, then a final climb of broad rounded slopes. These hide the cairns (at the summit and further southwest) for most of the way, but otherwise it's a straightforward ascent.
From the cairn, I noticed a distinctive corrie slightly east along the ridge, which might be at the 950-metre level but seems uncertain on the OS mapping. This was also a chance to take in views back along the ridge. And to consider the descent, as the usual route would involve crossing a lot of boggy ground. I half-considered heading over the outlying top of Garbh-charn instead, but decided on the usual route. I passed a male Ptarmigan while descending the upper (still stone and grass) sections of Sgurr na Ruaidhe. These slopes become much wetter and softer going, with a lot of cotton grass and spotted orchids. There is a track further into the corrie, but the ground there was particularly boggy along the track - and seemed to be more water than peat in places when I investigated alternatives; every step seemed to find water flowing downhill beneath the heather. 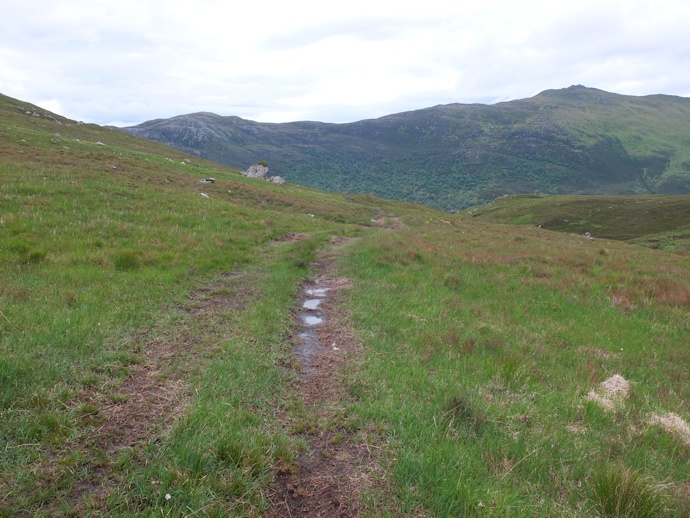 There's a small hydro facility of some kind not far above the glen. This does at least mean a solid track for the lowest part of the descent, a final half-mile back to the parking area. The track brought me out where I had left the car that morning, passing more wildlife interest including (from later checking of one photo) a female Azure dragonfly and some variation from the spotted orchids I'm used to seeing covering the hillsides. One other car had joined me on this grassy area, possibly belonging to a few other wakers who'd passed in the cloud atop Sgurr a'Choire Ghlais. I'd not noticed any hats, hands or other extremities sticking out of the bog, so can only hope that they got through safely. Track from the grassy parking area

After a pleasant drive back down the glen, I returned my pass at the gate, arriving there at the same time as an angler returning from the river. Then I set about replenishing some calories with a delicious dinner at the Struy Hotel, conveniently located just a few hundred metres left along the main road.

Re: Four from Strathfarrar

Pity about the views

Re: Four from Strathfarrar

Luckily I got views from the neighbouring Mullardoch hills and improved conditions the next day, so I'm not complaining (much)

There's plenty of access time to the glen in the peak summer months, if you're there on the right day, though Wednesday afternoons are just for shorter routes (or the quick-of-foot).

I had investigated a route in from Strathconon to the north, which looked interesting but a lot longer and requiring a much longer drive from Cannich. Plus more navigation and pathless sections, making Strathfarrar the obvious approach.