A Special Day on Carn Aosda

A Special Day on Carn Aosda

41 people think this report is great. Register or Login free to be able to rate and comment on reports (as well as access 1:25000 mapping).


Firstly, i never thought i would ever write a walk report (as much as i enjoy reading other peoples!!) and certainly not for the Munro often thought of as the easiest of all to complete, but i felt this was a story worth sharing.

To give some background, the story of this walk goes back to April when i received a text from my big brother Peter. He had been looking at the munros and had come across Carn Aosda with its description as the easiest of all due to its high starting point at Glenshee. He told me he wanted to climb this mountain with me. What makes this a little different is that Peter was born with Spina Bifida.

When he was born, my parents were told that he would spend his life in a wheelchair... when he proved them wrong and began to walk with sticks, he was told he would always walk with sticks. In his usual stubborn manner, he threw the sticks away to allow him to play football with the rest of the local kids. He's 5 years older than me and i can remember him only walking with his calipers on, determined to be as independent as possible.

So when i got his text, i knew he was determined to attempt this walk, but i had reservations on whether it would simply be too much for him. I was in France at the time and was not coming back to Scotland until July, so i knew that if he wasn't completely sure, he had time to reconsider. I wasn't surprised when the first thing he asked me when i got back was "When are we going to Glenshee!!??"

So early on Monday morning we set off on our drive north. I had given him all the advice i ever give anyone who is going hillwalking with me about weather conditions, clothing and supplies and, of course, the advice that the hill would always be there another day. But i could tell from the look in his eyes that today was the day for him.

We set off with the tops going in and out of cloud, and the odd shower passing through. It was a slow pace to allow Peter to take his time and have plenty of rest every few steps. The walking sticks he had bought were perfect for helping him with his balance. And foot by foot, minute by minute, we made our way steadily up past the green hut and across the ski runs. The long straight part of path to the summit ridge was badly eroded and i worried that this might be too much for him, but he was determined that coming this far he was going to make it.

We reached the sign at the top of the ski run which points to the cairn and he realised he was going to make it... a huge smile broke out across his face and i was simply left speechless with pride. I videoed his last few steps to the cairn and hugged him... i'm not embarrased to say we shed a wee tear there at the top!! And unusually for me on a munro, we had 20 minutes sitting in sunshine at the summit as he sat and took in the views.

It had taken us 2 and a half hours to walk up, and it would take us the same to edge our way back down again, following the longer, shallower path this time to avoid the steep, eroded path we had come up. By the time we were coming down to the car park, his strength was going from his legs and arms, and every step was a trial, but the stubborness that had pulled him to the top of the hill (and out of his wheelchair all those years before!) ensured that he had completed his first (and probably only) munro without any help from me other than some words of encouragement.

To say that i am proud of my brother is an understatement. I am amazed at his determination to succeed in something that everyone would have told him was impossible. The moment when he reached the summit will live with me for the rest of my life. And it made me realise that sometimes the only voice we should listen to is our own.... 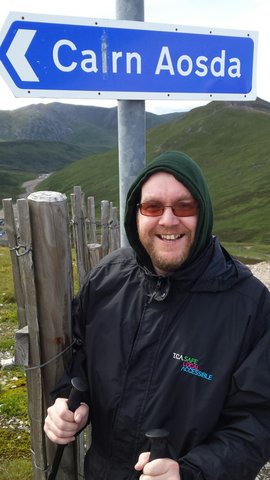 Very well done Peter. A great example to us all and not just for mountain walking

Simply inspirational, brought a wee tear to my eye too. Shows there can be no limit to human endeavour, if the mind is willing. Go Peter

Respect ...and great inspiration for the others

Really enjoyed reading that, and a huge well done to your brother.

What an inspiration, this is a worthy prize winner, very humbling to read. Your brother is a brave and incredible person and I wish him all the very best for his next adventure

Superb. Very well done to both of you: Peter for his determination and achievement, and you yourself for the support and morale you must have given him. Excellent stuff.

Hi everyone, I am the aforementioned Peter and I only joined this site to thank, first and foremost, my bro, for this very well-written account of a incredibly special day with him. Every time I stopped to rest, he told me to look back and see what I had achieved, constantly giving my the inspiration to go another few feet higher. I also chose to rest on some very steep parts of the hill, which wasn't great for standing back up again and I relied on him to keep my balance. The feeling of getting beyond the steepest slope was pure magic and the summit was easy from there on.

Second, I must thank all of you for your kind words and compliments. They are all very much appreciated and although this (probably) will be my only Munro

, I do now find myself looking for routes up every hill I pass, so..

Top
41 people think this report is great. Register or Login free to be able to rate and comment on reports (as well as access 1:25000 mapping).