First day of my holiday and the forecast wasn't looking promising so rather than heading for the higher hills we opted for Ben Venue. It was raining a bit when we parked up, but we weren't put off and set off following the track to the right of the notice board and soon we had a glimpse of our target through the trees, and the rain stopped for the moment. 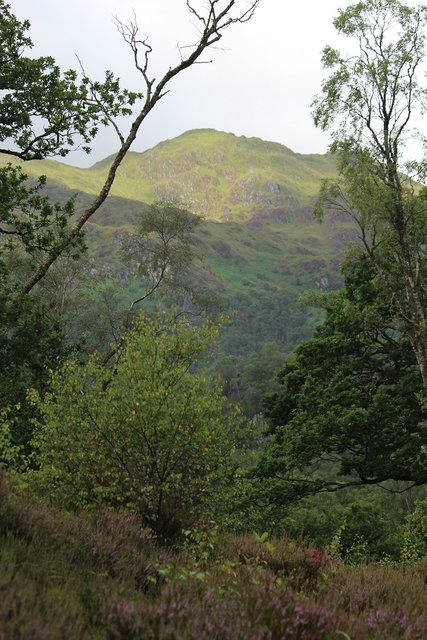 The route is well-signposted so it was easy going just following the regular signs that pointed us the right way, along with a couple of forestry signs warning walkers not to proceed along the forestry tracks as there was forestry work going on. We were soon on the track that was taking us round the mountain and, with no sheep in sight I let the dogs off the lead. It wasn't the most attractive route with felled trees, some new forestry tracks that were just ignored (the first was also signed to keep walkers on the right path, which is the one just going straight on...and on...and on...). Basically, you just keep going on before reaching a new section of path and passing through a fence into boggy ground. After the long track, the boggy ground was a welcome change! Millie on the new track

There was still a clear path to follow and the scenery became so much nicer with a waterfall cascading down from the hills. At the top of the hill to my right I spotted something and initially I thought it was maybe a deer but when I looked properly I realised I was looking at one of the goats! Never seen any of the goats roaming the hills before. I scanned the hillside for others but I was soon satisfied enough that any goats were high up on the hill so Moss could stay off-lead and we continued on heading towards the waterfall and following the steep path up towards the ridge. Despite being wet it wasn't slippy, a bit of a scramble for me in places to get up, but no problem for the dogs who were racing on ahead and looking back at me as if wondering why I wasn't going as fast as them! From here it was across a boggy area, great fun if you're a dog apparently but me, I like to try and keep my feet dry so looked for the easiest way across and eventually we reached the big cairn that marked the splitting of the paths. From here, we took the right path to head up towards the summit of Ben Venue, another steep and rocky scramble up but nothing too difficult and we eventually reached one of the summits. The views ahead of us towards the lochs was great, but the views behind where not so promising and we were soon hit by a downpour! Any thought of visiting the other summit, the true summit, were out of the window as we opted to just start heading down again. Despite being wet the path down was still fine, though a bit of sliding down (for me anyway) was required at some points! Finally we reached the bottom, and were out of the worst of the rain and crossing the boggy bits. Unfortunately for the dogs, the boggy bits were short-lived and it was back onto the long track back to the car. We made it back in plenty of time to make it across to Loch Katrine for a trip on the Sir Walter Scott paddle steamer!