On 26 Jan three of us set out to climb Sgurr na Ciche & Garbh Chioch Mhor in very snowy conditions. The drive up Loch Arkaig was (as you say) interminable - I had to stop on each crest as the bonnet of the pick-up was pointing skywards and obscuring the view into the next dip! We eventually started walking at 8.00am up a very wet and boggy Glen Dessary 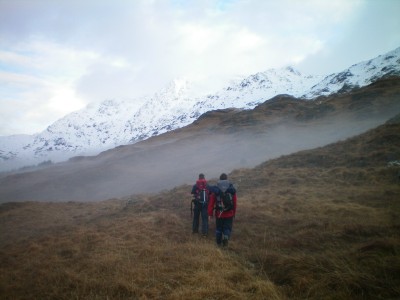 We planned to go anticlockwise (unlike the description on the BB) because we would be able to reach our targets before traversing the ridge East of Garbh Chioch Mhor, which is described as "exceptionaly rough with many steep ascents and descents and twists and turns" and was enveloped in cloud.
The walk up to the watershed is about 6 miles and the ramp which runs up onto the west side of Garbh Chioch Mhor was clearly visible. It was also deep in wet snow and required an energy-sapping trudge to climb it. 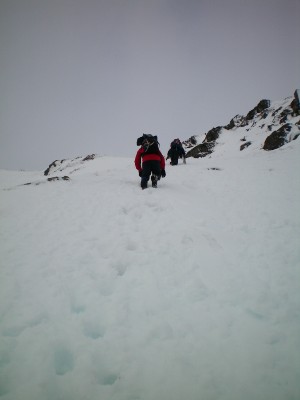 Worse was to follow when we reached the platform which runs along to the gully up to Feadan na Ciche. Large "swiss rolls" of snow were trundling down from the crags of Garbh Chioch Mhor and stopping in front of us - I checked to see if there was a likely avalanche awaiting us, but decided there wasn't. However the snow was now even deeper and conceled some holes and streams. The most energetic of the party resorted to crawling to make a trail for us. The gully leading up to Feadan na Ciche was slightly better, and was adorned with hundreds of icicles. 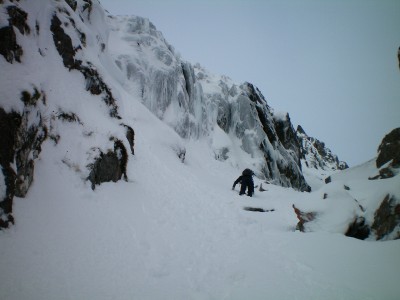 We reached the bealach 5 hours after starting out. Given the conditions we decided to miss out Sgurr na Ciche, so we started up the slopes of Garbh Chioch Mhor, following the wall which at this point was visible above the snow. Suddenly the cloud cleared off Sgurr na Ciche, but it was only for a moment - the clag quickly returned. 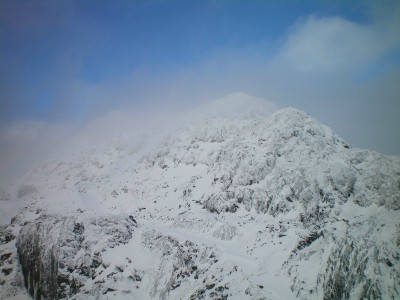 Some steep icy patches forced us to don crampons, but a broken heel strap meant one of us had to continue without. The visiblity was now almost white-out, and when we lost sight of the wall and bumped into a sort of tower, we resorted to the GPS. Unfortunately this gave us several different readings up to a kilometre apart! (I think it thought it was still in Northumberland). We climbed the tower, hoping it was the top but it didn't seem to be, and the ground dropped away in all directions. Hmmmm....it's hard to do, but we made the decision to retreat, and headed back down the way we had come, being rewarded with some views of Loch Nevis and Eigg underneath the dark clouds. We reached the car in the dark. Disappointing of course, but a good day out, and we're still alive. We'll be back.
For the record, the final pic shows the tops we were trying to do, taken a few years ago from Sgurr nan Coireachan. 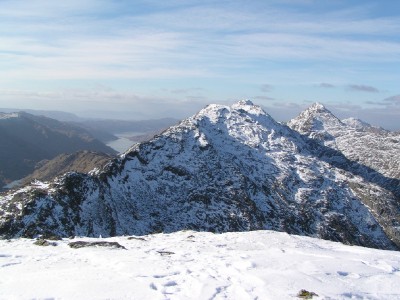 My God, you're brave setting out on such a remote Munroing session in weather like that - sorry you didn't make it but thanks for the pics as I'm planning to do that this year... in summer!;-)

Mountain Coward, the big problem is that the ridge is very rough and complex, so the compass and GPS are of limited use - you need a clear day (whether summer or winter) if you want a smooth trip. I think my next attempt will be in summer too - longer days and the glen should be less boggy.

Great effort in trying conditions, like the shot “Gully leading to Feadan na Ciche” best.
Looks like you got a cracking day on these hills on a previous occasion.

It was a cracking day, in Feb 2006. We continued over the Corbett: Sgurr Coire na Breachd Laoidh (I think that's how you spell it). Pic below. 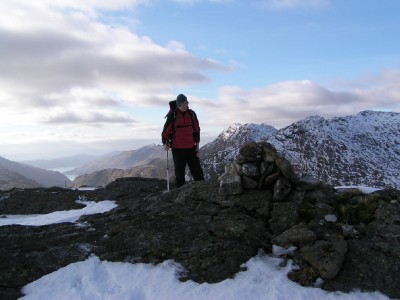 Yeah I gathered they are very rugged - they're classed as Knoydart aren't they? That says to me they will be very rugged. We're gonna do them in June I think - will probably need all those daylight hours, especially as I'm not the earliest riser and we'll be starting from Fort William.

Blood-quickening photos of snowed-up hills there! Planning on doing these in what promise to be pretty good winter conditions on Saturday. Looks absolutely stunning!

Aye Na Garbh Criochan is well named and tough hills. I have been on Sgurr nan Ciche /Garbh Cioch Mor twice and had clear visibility on both occassions ,superb effort and likely a wise retreat.