Not a great day weather-wise, but wanted to get out of the house for a while so took the opportunity created by a bit of a break in the rain to go up the closest Marilyn to Lossiemouth - which is the rather modest Brown Muir located just above the the Rothes Glen which has a 'summit' that is also home to a small transmitter mast which seems to be currently used by Orange and Vodaphone.

If anyone is looking to ascend this little hill, do not be fooled by the OS Map for the area - as I was when I made my first attempt a couple of days ago. The OS Map suggests that there is a track to the transmitter that zig-zags up the north side of the hill from Logieburn farm via the derelict farm buildings at Humbreck. However the track upwards from Humbreck no longer exists in any shape or form beyond forming a contour on the side of the hill. It's completely overgrown with gorse and so of no use whatsoever. I did attempt to climb up some steep meadows above Humbreck, but progress was limited by a combination of ticks, thick gorse and boggy heather - so I went back home to do some further research via Geograph to guess at the routes used by others.

The current track instead starts at the Mains of Teindland - Moniemouies - Burnside crossroads and you want to head up towards Moniemouies farmhouse:

Track leading up to Moniemouies farm: The first couple of hundred yards of this is old tarmac, but it soon gives way to a regular dirt track as you approach Moniemouies farm. Moniemouies farm itself is a derelict farmhouse which doesn't seem as though it has been abandoned for that long as the roof and stonework are in decent external order. Always sad to see a big house such as this in a pleasant location abandoned - but there is a lot of that around here unfortunately: Although the OS Map suggests that the track ends here, there is actually quite a good track leading up from Moniemouies towards Brown Muir, skirting round the edge of some sheep grazing fields. The views start to open up a bit more above the farm and you can get a good look down on the Speymouth area across to the Bin of Cullen on the coast: 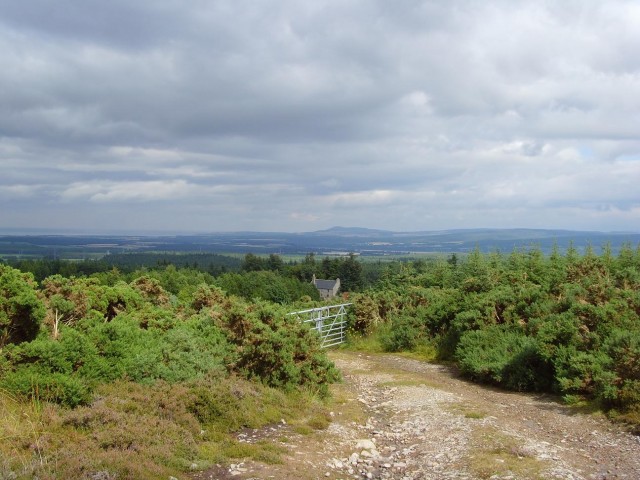 Soon you come to the point where the old track would have met the current track, but there is little evidence of the old track (so clearly given on the OS Map!) at that point. The route thereafter across the top of Brown Muir follows that of the original track and the green meadows give way to (unsurprisingly) brownish moorland and the transmitter at the top soon comes into view: It's a gentle incline up towards the summit from there, nothing too taxing and the track is generally in good order, so it doesn't take too long until you reach the small transmitter station: Next to the transmitter is an OS trigpoint: The summit is fairly flat with gentle undulations. The OS Map suggests that the actual highpoint is a few yards south-east-ish of the trigpoint and there is a slight rise there that I wandered over to through the heather, but there is little difference to the experience to make it worthwhile - in fact the area around there is quite boggy as soon as you leave the defined track. I was a bit disappointed that you can't see into the Rothes Glen as much as I would have liked - you would have to trek 50 yards through boggy heather to get a better look, but with rain coming in I didn't make too much of an effort. What you do get though is a great view to the hills to the south, including a great profile of the area's key mountain, Ben Rinnes: And also a great view over Elgin and the Laich of Moray towards Lossiemouth - which was uncharacteristically covered in a massive rainstorm at the time, as you can see over my shoulder in the background here: Me on Brown Muir with a rainy Lossie in the background

There's not much scope for wandering around there given the harshness of the heather bogs up there, and zero in the way of alternative routes to make the walk into a round one via somewhere else, so you have to simply retrace your steps back down past Moniemouies farmhouse to the crossroads. Unfortunately the rain caught up with me with just a couple of hundred yards to go and it didn't hold back!

A nice little walk that can be done in no real time at all, with some decent views - but it does lack any oomph to it. Nearby Ben Aigan is more fun.

Re: Brown Muir - a Moray Marilyn

Good report and timely for me - I'm staying nearby at the weekend dog-sitting for my parents - i was considering taking them a wander up here.