This Graham doesn't have its own WH route yet and from my earlier online research, I found out that it's usually climbed in combination with the neighbouring Corbett, Beinn a'Chuallaich, so called "Loch Errochty round". There is some uncertainty about the summit, as both Creag a'Mhadaidh and its western top, Gualann Sheilach, are both shown as 612m high. SMC Guide to Grahams lists the eastern top as the true summit, so this was our target. I'm not a purist and I will probably never complete Grahams, so it was less about statistics, more about an enjoyable day. Having climbed Beinn a'Chuallaich on its own in winter conditions, we could now concentrate on Creag a'Mhadaidh only. There is an easier, shorter route from the south, but we always fancied walking around Loch Errochty, so here we were, on a showery Monday, getting ready for the businesses as usual

Starting point is at 725649, by the locked gate, the road leading to Errochty Dam. Only enough space to park 2 cars maybe, but as it was a weekday, we were the only visitors:

Our plan was to walk along the track on the northern side of the loch, then climb the Graham and descend to the footbridge over Allt Ruighe nan Saorach, then back to Trinafour by the track on the southern side. We discovered to our delight, that the dam is not locked and can be crossed, which saved us a bit of distance in the end

Track_CREAG A MHADAIDH 25-07-16.gpx Open full screen  NB: Walkhighlands is not responsible for the accuracy of gpx files in users posts
As we began our little expedition, weather was sunny and walking was very pleasant along the tarmac road, with good views around - lots of green vegetation, trees and shrubs: As we approached the dam, we spotted the first signs of a showery cloud, wind blowing from the west, we knew it was going to hit us soon: It was time to prepare for the wet experience, nothing too surprising this summer

My light summer boots were still drying out after Carn Ban the day before, so I was wearing my winter Brashers, much heavier, but definitely waterproof: The bad side of being wrapped in waterproofs: if it's warm, you will get sweaty very quickly. And this was the worst kind of conditions to wear a coat and two layers of trousers: in between showers it was sunny and very humid. Yeah, my goretex coat is supposed to be breathable. Supposed to, he he. I was still boiling up inside all those layers!
A cooler moment - the first shower charging towards us:

I've seen reports suggesting a climb to Sron Chon and a high traverse to Creag a'Mhadaidh, but we were put off by 2m high bracken on the lower slopes, and decided to stay on the track for as long as possible, as it offered much easier going. We knew this track doesn't go all the way around the loch, but ends somewhere in the forest, about 2/3 way up, but it was still the less challenging option.
The rain stopped after 20 min opr so and the sun came back, the world began to smile again Shower nr 2 was already boiling up above "our" Graham, but this one passed over in less then 5 minutes:

After the second shower it seemed that a longer sunny spell settled over Loch Errochty, our target hill basking in sunshine:

At 676657 the track reaches a gate into the fenced off forest. Three options here: go up along the fence, go down to the shore or continue into the woods. We picked the last option, hoping that maybe the track goes a bit further than marked on the map. Sadly, it does not, it just ends abruptly in the middle of the forest, by a little stream, just as marked on 1-25k map. Trying to find our way through the dense woods (more 2m high bracken) would be the worst choice, turning back was not a welcome thought, either, so we did what we should have done at the gate - we descended the short distance to the shoreline. We had to climb a wonky deer fence (I almost got myself nailed on it

) but as soon as we reached the loch side, it was easy going again. I don't know if this loch is always half-full, or maybe it was a very dry season down there (with all the recent rain, hard to believe), but if you look on our GPS track, it says we actually borrowed shoes from Jesus!

In reality, the "tidal zone" around Loch Errochty is wider than A9!

At least we were making some good progress again, and it was dry underfoot (more or less). Of course we didn't expect a dry path to the summit of the Graham, but the longer we stayed off the bogs, the better for us.

Allt Sleibh was our only worry as it looked quite substantial on the map. Crossing the very mouth of the river we didn't fancy... ... but a bit further upstream, we managed to find a shallow ford:

Weather was still nice, warm and sunny, I was hoping for clag-free summit for a change... The western end of Loch Errochty is dotted with post-glacial hillocks, we climbed one of them to take some pictures: The way up: the usual Scottish landscape. Bog, heather and scattered boulders: Climbing to the summit was uneventful to say the least, a bit boring to be honest. At least my feet were dry and the views behind kept my smile on: 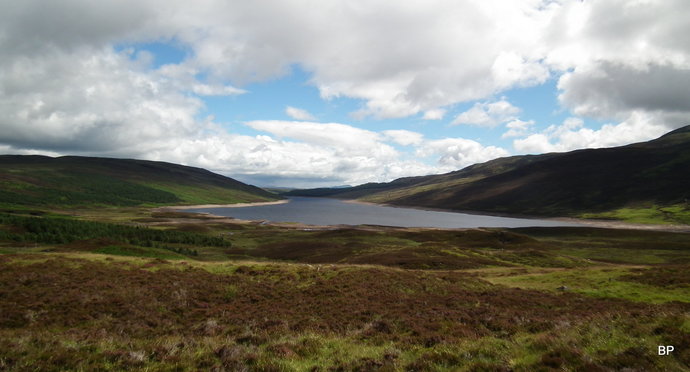 Near the top I felt I was beginning to run out of steam, I was hungry and oversweated, maybe I should have taken my waterproofs off earlier... but here it was, the top, just a stroll away!

Charging up with a sandwich in my mind: The cairn turned out to be the windiest place in Scotland! As we climbed, we were protected from the wind by the slope, but as soon as we emerged on the flattish summit area, we were almost blown over!
Graham no. 52, blowy but nice views: No matter how windy, it was time for lunch, I dug up my sandwich box whereas Kevin walked around the cairn snapping photos quickly. It was too windy to try panoramic pictures, but what he snapped was good enough to illustrate, that Creag a'Mhadaidh is a good viewpoint.
Loch Errochty again, and what must be the tops of Beinn a'Ghlo on the horizon:

Beinn a'Chuallaich to the right of the loch: Another shower approaching from the west:

Round rolling hills to the north:

A rare chance to munch some Wedel chocolate, when hidden behind the cairn:

As the rain was coming again, we quickly finished our snacks and started the descent towards the bridge. We encountered some peat hags, but nothing drastically muddy, and enjoyed nice views on the way down - at least before the shower hit us: The rain stopped just as we reached the footbridge: From here, it's easy going on a good track.
Looking back at the river crossing:

One more shower came and went (I lost count by then), but we still considered this little jaunt as successful. Might be a wet experience in places and pathless on the final ascent, yet this route allowed us to explore this hidden corner of Grampians, which we would never see if we only concentrated on Munros. Yep, climbing Grahams has its advantages

After the last shower died out, we slowed to a lazy pace and enjoyed the solitude of this place. Through the whole day, we didn't see a single soul! Kevin liked the Loch Errochty round as well. Even though we only ticked off one very low Graham (it's listed on WH as the fourth lowest), it was still quite a challenge. All that sweating, bracken-swimming, fence-climbing, bog-hopping, shore-walking plus a wind-blown summit... Quite an adventure!

So if you like challenges, this is a route for you!
..........
The next day's forecast was rubbish, but we were desperate to use up the week off as much as possible, so we picked a couple of local Loch Ness Grahams... just to save ourselves driving in the rain. We ended up with even more bog-hopping and the word "squelchy" almost became our last name