The day after the referendum, and a Friday lunchtime start to mop up the two hills I'd missed out on a misty November weekend at least got me out of the way of the person in the office most likely to rant endlessly about it.

I didn't feel much like heading into England, to be honest - I wasn't very pleased with it - but it was good for me to hear different people talking and be reminded that it wasn't just a country full of bigots.

The 12:51 didn't stop at Oxenholme, so I had time in Carlisle to go and find some lunch. By the time I got back to the station the trains had got horribly confused, but although my 14:49 wasn't due to arrive for about another hour, I was allowed to get on the 14:30 which was leaving at 14:46, and although it was even later into Oxenholme I just made the Windermere train. I had another half hour there to sit in the sun, and then I was on the Coniston bus and finally really starting on my adventure,

At Hawkshead Hill I sat on the wall of the chapel to put on my sensible shoes, and headed off up the minor road. 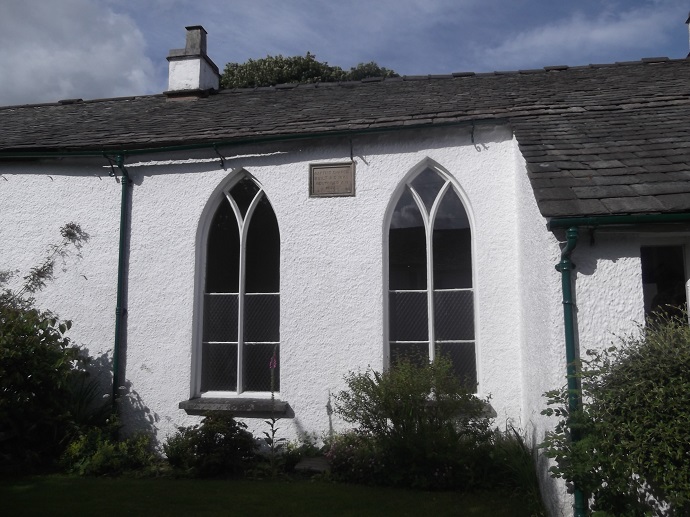 The next problem was that I was off the edge of the map - I'd checked that all the hills were on it, but forgotten about the starting point! But I knew from the Wainwright book that I had to meet a crossroads like a St Andrews cross and head northwest, so that was what I did, down a road signposted for Tarn Hows, and turned off right as directed onto the first path.

This was a broad track with tall trees towering above it - the only problem was that it started to head downwards, instead of upwards as the book promised me, and I thought I must have turned off too soon. After a bit the track seemed to be coming into the grounds of a house, which was definitely wrong, so I turned off left on a tiny path through the trees to try to get to where I should be. This time I did come up above the trees onto a hillside, but it wasn't right at all - I was as high as I was going to get, but nowhere near as high up as I should have been, and all of Tarn Hows was spread out before me where it shouldn't have been. 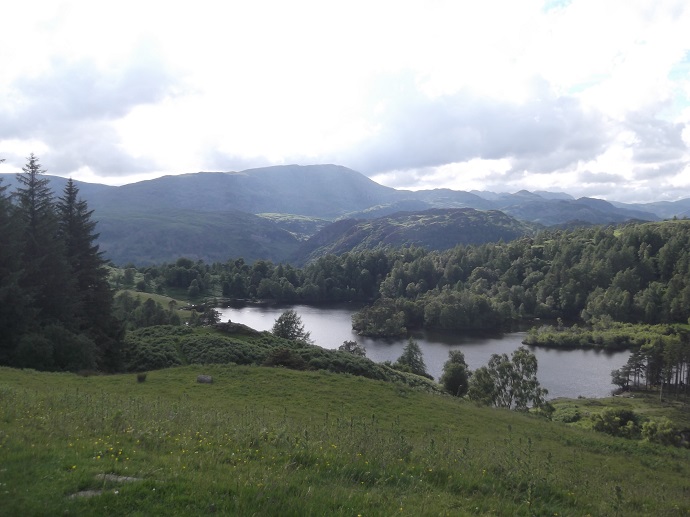 I was fairly sure that Black Fell was the place to the north of me, and headed off that way, past a mystery building called Rose Castle - nothing like either a rose or a castle - and avoiding the main path to try to head straight for the hill - which might have worked, despite boggy bits, if I hadn't met a cow!

Attempt two brought me down onto the main path and up to the head of the tarn - it was all very beautiful, and I was glad to be there, but I hadn't had much time to start with. From here I was back on the map, which definitely helped - I followed the Cumbria Way briefly to meet the road I should have been on to start with, which turned out to be definitely the rough lane of the Wainwright map, and nothing like the one I'd found.

Towards the top of the lane I turned off onto the path towards Black Fell, which climbed through the trees then onto more open ground after a gate. 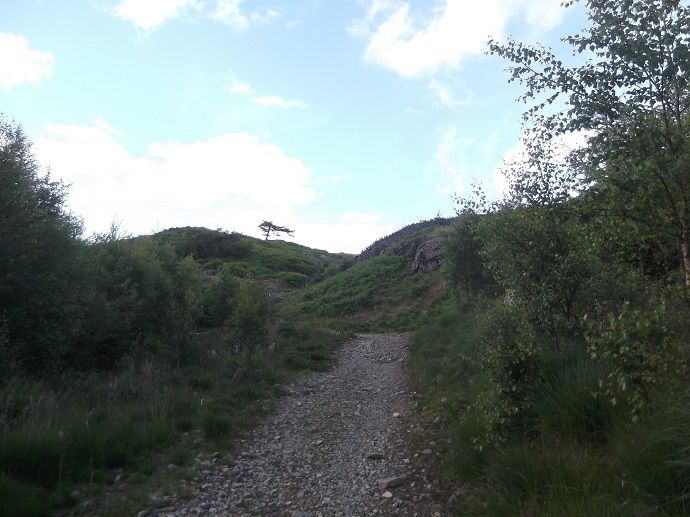 The summit area was the usual lumps and bumps until I reached the trig point on the highest bump - a bit like Gowbarrow Fell in the east, which I'd also climbed on a summer evening. 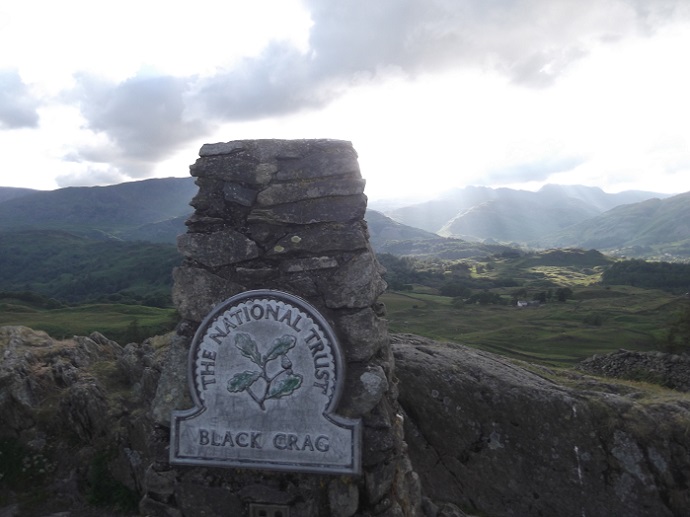 As the highest point in a low area, the views to the higher hills all round were glorious, but I didn't have much time to enjoy them, and retraced my steps to the gate, where I took the path marked for High Arnside, and made my way down to the road at Oxen Fell. 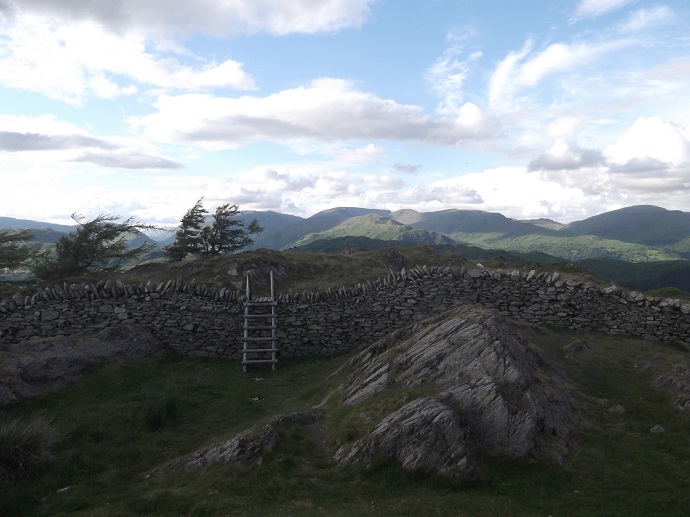 It was looking increasingly unlikely that I was going to make it up Holme Fell and down in time for dinner, but it was so close now, and so far from other hills, that I couldn't leave it behind.

The start of the climb was a surprisingly long way down the road, but at least I could see the bypass paths this time, unlike when I walked to Coniston in the dark - along by the road, then round the back of Yew Tree Tarn to head up a sloping path onto the hill. 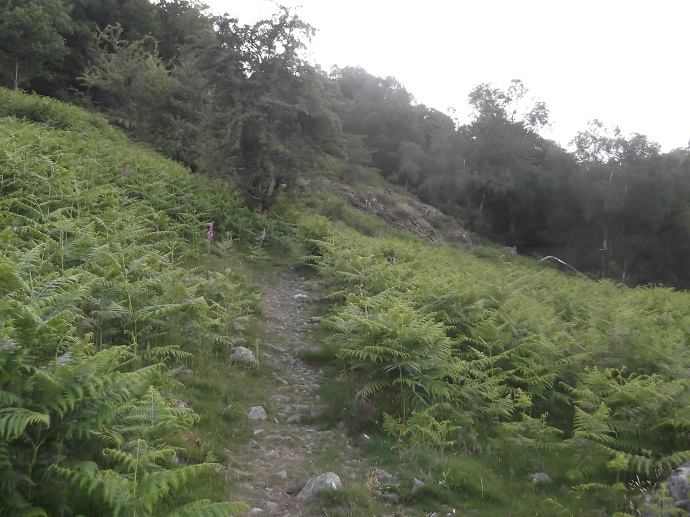 Higher up the path swung round and headed for a dip on the main ridge - I was walking up the shadowy east side, but the sunlight was so close that it was lighting the tops of the trees just above me. 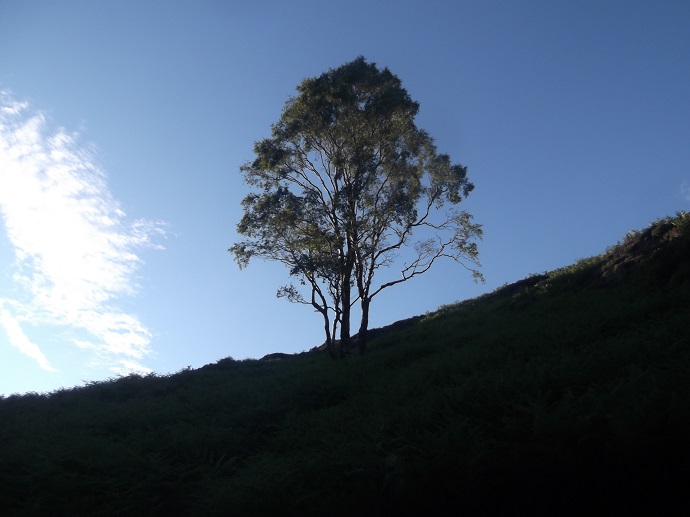 Looking up I realised that the trees weren't the only thing in sunlight - a deer was watching me from above, but of course as soon as I tried to take its photo it turned and ran. From the crest it was still quite a hard pull to the summit - I was feeling surprising wobbly, even allowing that it was late in the evening and I hadn't had any dinner.

I was expecting from the map to have to go along and onto the summit from the back, but there was a path up the nearest corner, up a scrambly bit, and up again onto a tiny summit ridge with three competing highest points. 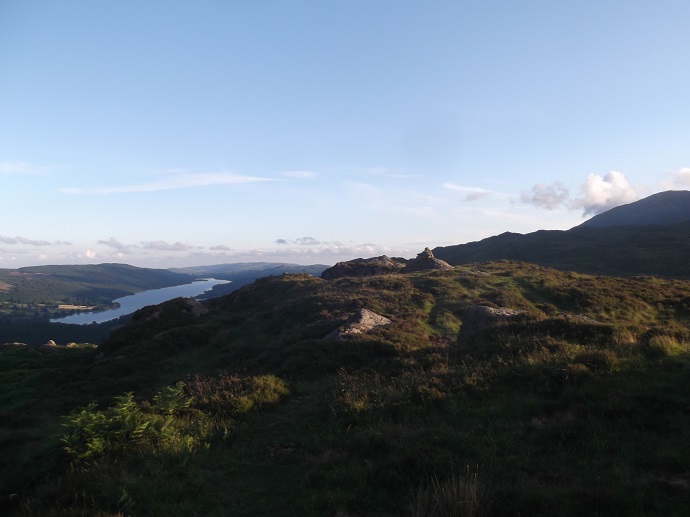 Again it was a good summit view, with the shapes of the eastern ridges forming an especially good collection. 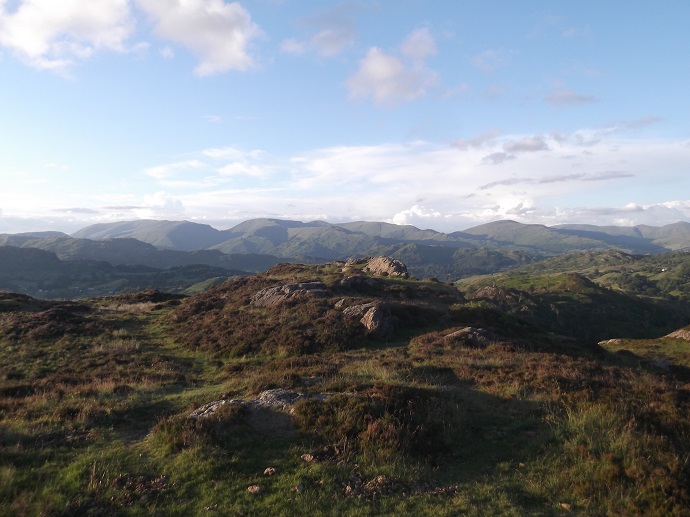 From the summit I could see a clear path leading down the west side of the hill, but somehow it wasn't this path that I ended up on, taking me out past an old quarry, which gave me an odd impression for a moment of looking at water, before it settled down as just a huge hole. Then from the farm track it was along a field path to the Little Langdale road and over to join the track to Elterwater halfway across, and find bed and beer at least.

Two nice little fells these; much better than a simple mopping up operation. Tarn Hows is attractive too.

They were two lovely wee hills, and I really enjoy summer evening walking, but they would have been even better if I hadn't got lost at the start and had made it down in time to get some dinner

Once you did get on the right track you certainly enjoyed a cracking trio N&D. I like the fact you couldn't resist Holme Fell even if it meant missing dinner to bag it