Family with a Dog

Family with a Dog


Preparations
Is walking the Rob Roy Way a suitable family summer holiday trip, or should it be left to grown-ups? We were a family of four, including son H aged 13 and daughter N aged 11. Four humans, that is, plus an energetic labradoodle, aged 5 and by far the fittest member of the group.
Our greatest outdoor achievement to date had been climbing Schiehallion, but the effort had for two years put us off any challenges more serious than some 3.5 mile Sunday walks. We needed to test our fitness and our gear. So a week before the big Day 1, we embarked on a nine-mile circular walk (in an area where Chitty Chitty Bang Bang was partly filmed). We walked more slowly than that old car and various deficiencies were identified in our so-called waterproof coats, trousers and boots. The next day was therefore even more arduous and painful (at least to the wallet): a day tramping around the Outdoors shops in town.
H was long-legged, relatively fit and well-motivated to complete the Way. All we needed to do was to attach the earplugs from his i-pod to his ears, point him in the right direction and he was off. How far would N get? We weren’t sure that she would complete the Way, we hoped she would complete more than one or two days. But kitted out with very smart new rucksack and poles, she looked and, more importantly, felt like the compleat hiker, well able to take 79 miles in her stride.
The other big issue for us was the logistics. We didn’t want to spend too much on accomodation - we wanted to save the money for eating out in the evenings – and we needed to stay somewhere that was dog-friendly. So we rented a cottage in Lochearnhead, about half way along the route, and used a combination of taxis and our own car to get ourselves to the start and back from the end of each day’s walking.
Day 1
And so at 10:30 a.m. on a drizzly and overcast Sunday morning in July, we stepped out of the Buchanan Cab in the Market Square of Drymen and headed North-East to our car which we had left in Aberfoyle. Our backs wilted under the weight of our picnic lunches. We followed the excellent Rucksack Reader directions and the equally excellent Footprint Map. We admired the wild orchids and enjoyed the tasty wild blaeberries and raspberries along the route. The way was uphill to begin with but on tarmac, so we made good progress. A lot of the forest had been felled.
The views to the North and South were good but the cloud obscured Ben Lomond to the West. We saw no other Rob Roy walkers on the Way at any point on that day, but saw two parties of walkers crossing our path as we approached the intersection with the West Highland Way. We appreciated the contrast between the busyness of the WHW and the solitude of the RRW. The tarmac eventually turned into unsurfaced track through the Loch Ard Forest.
Day 2
More forestry track, then a muddy path through the trees. We lunched by the side of the Lochan Allt a’ Chip Dhuibh and admired the powder blue damselflies that came out with the sun. We met our first fellow Rob Royers.
There is no longer a viewpoint above the Lochan, but we caught our first sight of Loch Venacher and our first experience of the real Trossachs further down the forestry track. At the foot of the hill we met tarmac road again for several miles to the final hill in Coilhallan Wood before Callander.
Day 3
Boiling hot sun and a new type of terrain: former railway track along the valley bottom to the Falls of Leny, up the widening gorge to Loch Lubnaig. We tasted the sweetness of the tiny wild strawberries. Everyone, their bicycle and their dog was out that day. So were the flies. A beautiful golden brown slow-worm was unable to slither off the tarmac, but it squirted a brown liquid on N’s helping hand. 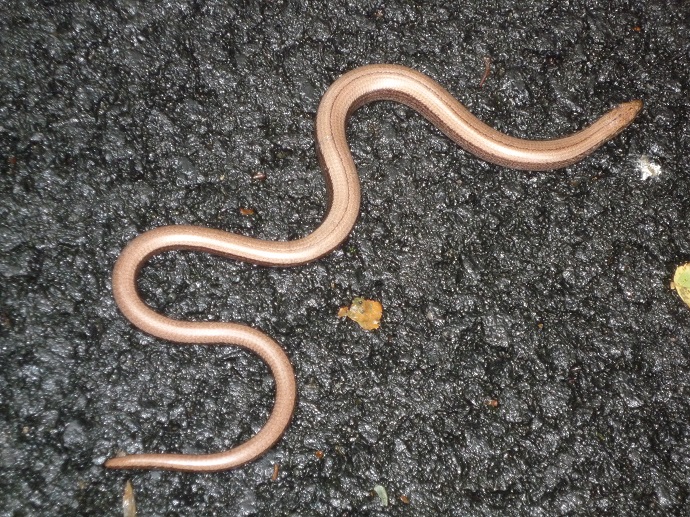 There was a very useful café with toilet at the Forestry Commission Chalets, but we picnicked at the lochside with a wasp. 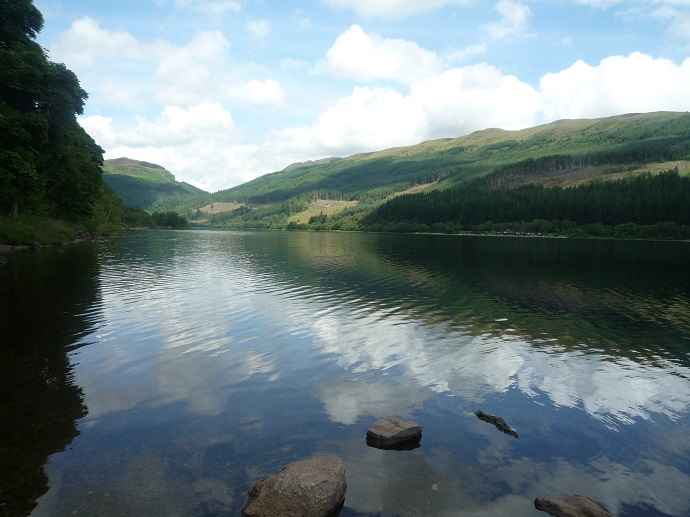 The views to the South became more sweeping as we climbed the valley. We descended and crossed the River Balvag on a bouncy footbridge to Strathyre. There we ate ice creams for tea before deciding to walk the stretch to Kingshouse that day instead of the following. We were rewarded with extensive views down to Balquhidder and beyond.
The Hotel at Kingshouse is now named Mhor 84 and it was our favourite dinner spot of the week. The dog was allowed in the Bar area which was in fact the best place to be on Ceilidh Night (Thursdays). We were lucky to catch the touring players of Feis Rois (Festival of Ross-shire): all manner of instrumentalists and singers got the joint a-jumping.
Day 4
The heavens opened in a major thunderstorm and the trail was deserted. We saw only two hardy running ladies from Lochearnhead. The dreich weather subdued even the view eastwards down Loch Earn and we never saw Ben Vorlich. Waterproofed from head to toe and sprayed with Smidge (recommended), we tramped on up the railway track through Glen Ogle to the picnic area off the A85, where we lunched in a cloud of midges.
But then the weather cleared and the views opened up as we descended down the tarmac path to the by then roaring Falls of Dochart and Killin.
Day 5
For some, this was their favourite day.
Route warning: the turning right off the South Tay Road about a mile out of Killin is not sign-posted or marked in any way. Because of that, we overshot the turning by about a mile and a half.
As we made our way up to the high moorland, various views of Monros and Corbetts opened up at various times in every direction: Ben More and Ben Lui to the West and South-West, Ben Lawers to the North, Farragon and Beinn A’Ghlo to the North-East, Ben Chonzie to the South-East. We enjoyed the track through the high moorland in beautiful sunshine, with banks of purples and yellow wildflowers on either side. 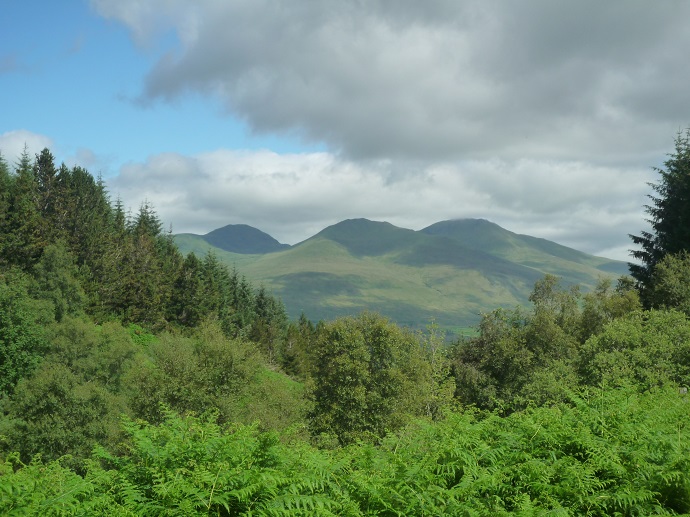 View to the North

The directions referred to a second radio mast but we didn’t see it.
We did see great views of Loch Tay stretching away from us as we made our way along the long path down the hill to Ardeonaig. The way was well marked. We then somehow completed the three miles along the South Loch Tay Road from Ardeonaig to Ardtalnaig that day. We were very glad to be picked up by the Highland Glen taxi at 5:30pm on the dot and transported back to our car in Killin. Day 6
This was the hardest day: five more miles along the tarmac road and then a climb to the wonderful, naturally sculpted Falls of Acharn before lunch. On the long haul up the Strath of Tay, our spirits were lifted by the view of Schiehallion to the North, which we had previously climbed, and by the miscellaneous wildlife: sizeable toads, a lizard and a mole. The mole was like a fish out of water as it scrabbled across the farm track in front of us under the afternoon sun. The forestry track seemed to go on forever before we finally made it to the glorious waterfalls at the Birks o’ Aberfeldy and the welcome sight of Rabbie Burns in bronze, sitting in poetic contemplation by the Moness Burn.
Day 7
For others, this was their favourite day. It started with what felt like a leisurely walk along the banks of the Tay after the hard exertions of the previous day. The pace was well maintained due to the best walking incentive and lunch place of all time: the Highland Chocolatier in Grandtully. You can order paninis or baked potatoes and eat them outside under a shelter with a dog. After six days of sausage rolls and pork pies for lunch, this was bliss but even more heavenly was the obligatory drink of hot chocolate. We stocked up on fine chocolate gifts in the shop, but their intended recipients never received them all … Over the hill to Pitlochry, a really pleasant walk up the hill and into the woods. A mad dash across the A9 was followed by a more pleasant stroll across the suspension bridge over the River Tummel. We finally made it to the Memorial Gardens in the centre of Pitlochry, but the burning question was: where was the Rob Roy Gift Shop where we could buy trophies, medals and T-Shirts to mark our completion of the Way?
Overall
Did N make it the whole way? She did indeed. She found that she could take nine miles in her stride, especially with the use of poles, but the 14.5 miles of Day 6 she found quite hard. She never lost heart. Occasional use was also made of the pulling power of the dog which was duly rewarded with extra helpings of sausage. We all felt we had done something very worthwhile. Since we took a wrong turning after Killin, we can proudly boast that we walked 80 miles (and do as often as we can).
Highlights: the many different types of walking, through forest, moorland, farmland and villages, up and down hills, by rivers and lochs, along forestry tracks, old railway tracks, paths and roads; the quietness even at the height of Summer; new and glorious views every day; the wildlife, wild berries and wildflowers; dinner on Ceilidh night at Mhor 84; the Birks o’ Aberfeldy; the Highland Chocolatier.
Other comments: three of us were wearing new boots (two pairs Scarpa and one Salomon, all waterproofed) but nobody got a single blister; there was a lot of tarmac; watch out for midges on rainy days; we only had to carry the dog twice – once over a style and once over a cattle grid – so many thanks indeed to those who installed the many dog-friendly gates; the way markings were excellent but don’t miss the turning after Killin unless, that is, you want to share our 80-mile bragging rights. 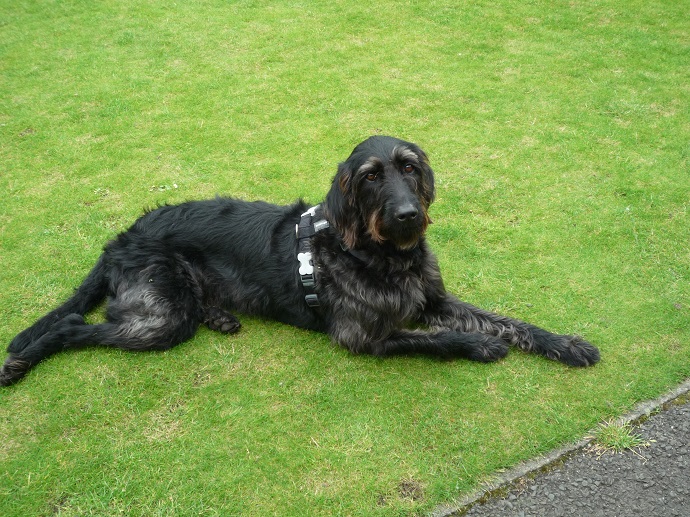