=
Well it's been over 10 months since my last day out walking.
It feels like such a long time since I climbed Ben Chonzie with "Super-Chase", back in June last year. It's been a busy time since then, with the main reason for such a long spell away from the hills being the arrival of baby Hunter back in September.
Hunter will remain just that for now. He can only claim "Super-Hunter" status once he's donned with own iconic T-shirt and bagged his own first Munro. At 9 months, it's still a little early, but I’m quite sure he'll be hot on his brother’s heels as soon as I can get him into a pair of walking boots. Maybe we'll go for a first summit at 2 years old this time; just to keep his older brother on his toes.
April 30th was the first real opportunity to get back onto the hills. We were up in Glasgow visiting family but decided to head towards Killin on the Saturday. The plan had been to tackle Beinn Ghlas & Ben Lawers with Chase, with Jessica spending the day with Hunter.
As it turned out, Chase decided on the Friday that he didn't want to go walking, so this trip was a solo effort by myself. No point trying to force a 4 year old to climb when he doesn't want to. That just wouldn't be an enjoyable day out for anyone.
We arrived at the Ben Lawers car park about 12:30. The sun was shining; there was negligible cloud above and no wind to speak of.
I sat and had a spot of lunch with the family before setting off at 12:50. It was hot; why do I always wear black?
Map, compass & guide book were in my pocket but, to be honest, were never needed; the route is pretty hard to miss. 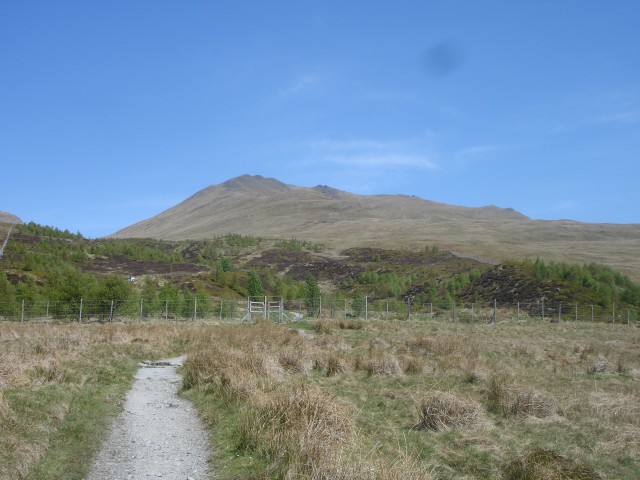 I followed the nature trail path as far as the stream crossing, where small blue way markers point you in the right direction. After about 15-20 minutes of walking I passed through a 2nd gate which leads to the open hillside and the still obvious route towards Beinn Ghlas. 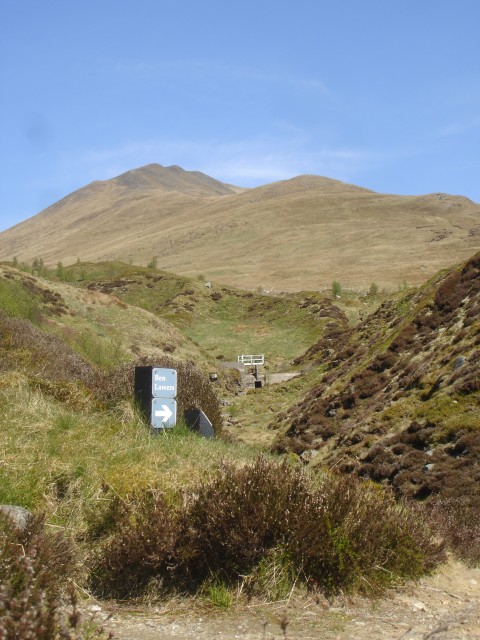 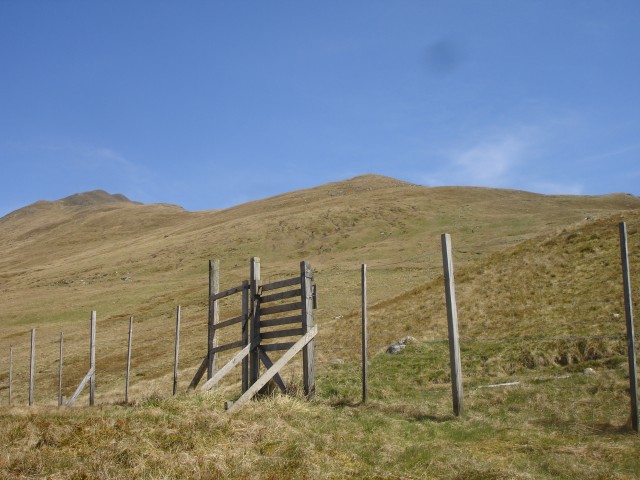 In under an hour, I had reached a levelling at approx. 3100ft , from where it is possible (weather permitting) to make out part of the route up Meall Corranaich across Coire Odhar as well as the obvious route to the summit of Beinn Ghlas itself. 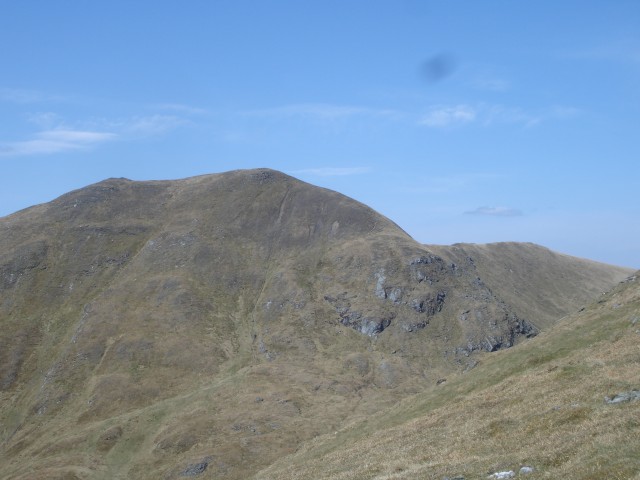 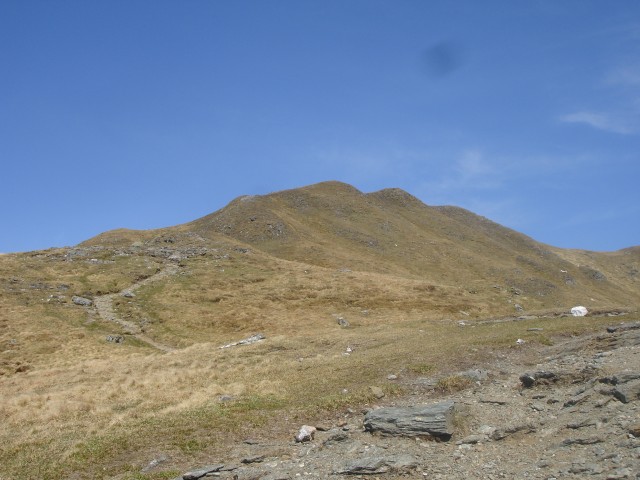 05. The main climb up to Beinn Ghlas summit.

Not much report on the push to the first summit of the day, the well-worn path landed me on the summit of Beinn Ghlas at 14:15.
Great views all around from the summit, and your first views of Ben Lawers proper. It did look quite a hike from where i was to where i was heading. The wind had picked up considerably on the final approach to the summit of Beinn Ghlas and another "gadget laden" walker was happy to let me know that the winds were in excess of 40mph. It felt it too; I'm no lightweight walker and care had to be taken to ensure you stayed upright. Still, cold and windy as it was, the sun was still shining. Exchanged a few summit shots with the other walkers, a quick snack and then heading off towards Ben Lawers at 14:35. 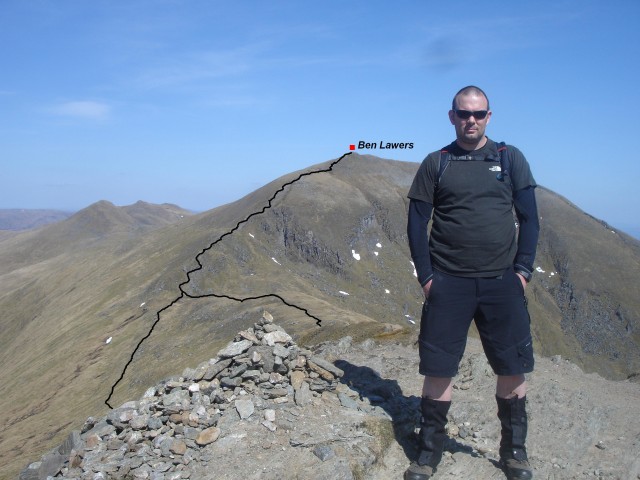 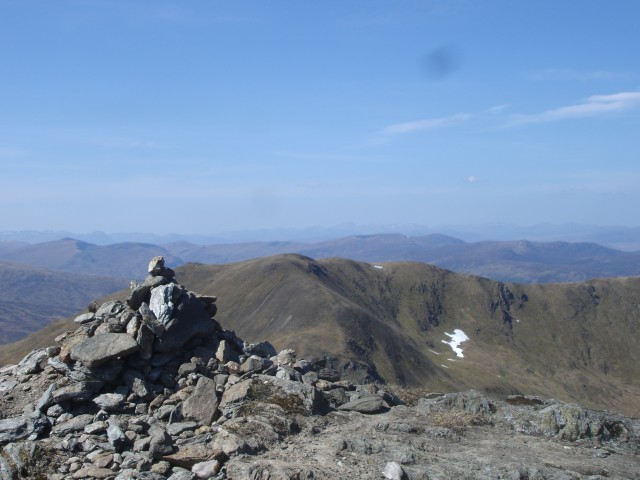 The wind, crossing between Beinn Ghlas & Ben Lawers, was fearsome. There were a few walkers turning back or heading down the alternative decent path behind Beinn Ghlas, leaving the climb up Lawers for another day. Much as I had been looking forward to having Chase with me, I was now glad that he wasn't. I'm not sure if I'd have risked taking him on, myself. Once across the pass between the two hills the wind speed dropped, but the temperature did the same. Braving it in my undershirt and T-Shirt no more, it was on with my NF Zepherus for the climb to the summit of Ben Lawers.
Again, not a difficult climb, although the occasional gusts kept my head focussed and my Lekis busy.

I reached the summit of Ben Lawers at 15:05 and was surprised to find that I had the top to myself for the best part of half an hour. This is always nice, but it was a bit of a nuisance trying to use the self-timer on my camera when the wind kept wanting to blow it off the mountain. Eventually managed to get a couple of reasonable shots before dropping off the summit to enjoy my lunch just below the summit cairn & trig point. 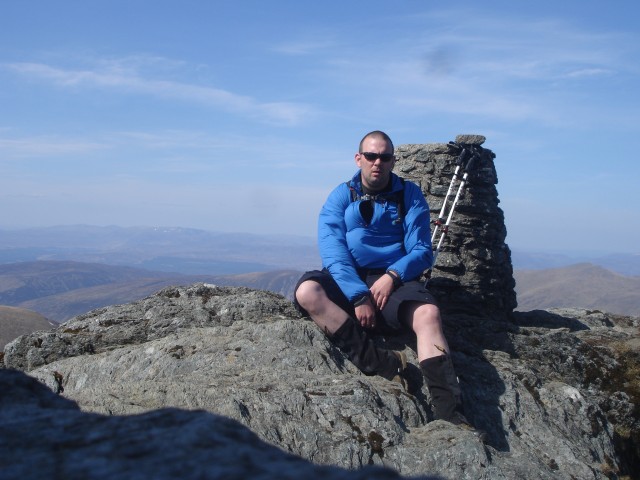 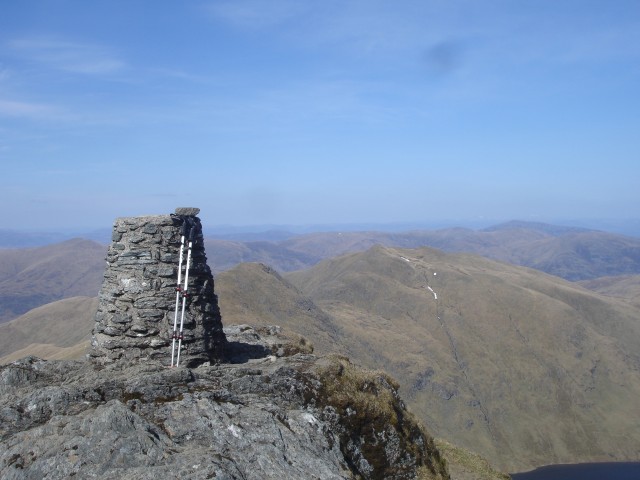 09. Ben Lawers summit cairn with An Stuc & Meall Garbh behind.

During my lunch, I had a read over my guide book (Ralph Storer's - Ultimate Guide to the Munro's) and worked out that I could possibly manage to get one more Munro in, if the decent route behind Beinn Ghlas has good going. Three in one day, after nearly a year off. It was worth a push. Meall Corranaich was my new target; could I get down Lawers, up & down Corranaich and back to the car park before my 18:00 pick up time. Only one way to find out.

The route back down Lawers was tough on the knees; a lot of loose footings mean you need to more careful than going up. Isn't that always the way. The wind behind me was trying to force me into a forward roll. That wouldn't have ended well, had I let it get the better of me. 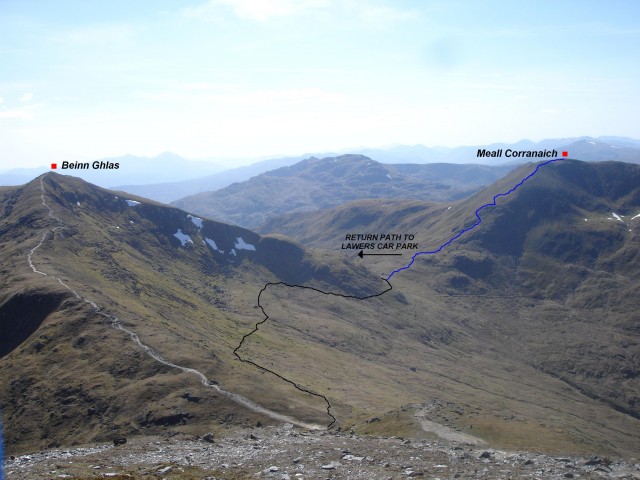 Not a lot to report about the alternative decent behind Beinn Ghlas, but as most people were heading back over Beinn Ghlas, I had a quiet walk, somewhat sheltered from the winds travelling down Loch Tay. 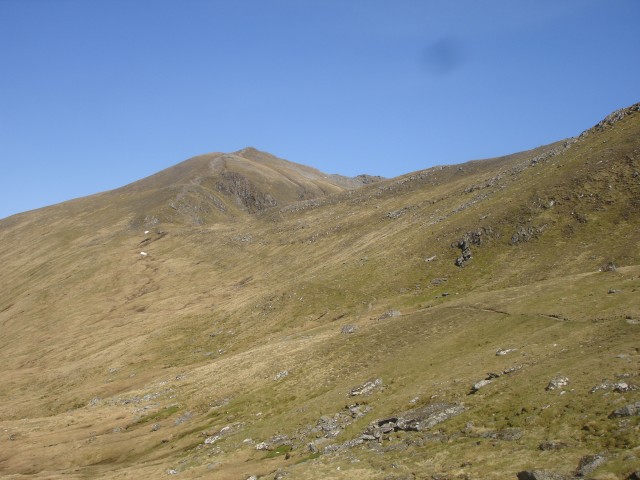 Once I rounded to back of Beinn Ghlas, I stopped at the very conspicuous boulder at the foot of Meall Corranaich. I did a bit of "Planking" but didn't bother the capture the moment on film. It was a great spot to rest my legs and soak up the sun.

Tempted (for a minute) to ditch the 3rd Munro and just enjoy a relaxing stroll back to the car park, the sight of a lone walker (making his way down), convinced me to get a move on and bag my next Munro while I could. His pace convinced me that the route wasn't as arduous as it had first looked.
It's a twisty, switchback path that leads you to the summit, loose footings in places and some sections where you wouldn't want to slip, but nothing too demanding or difficult. Again, as with the first two hills, the route is hard to miss.
I reached the summit at 16:45 and again, the place was deserted. A nice grassy summit, hardly Munro-looking, against its lofty neighbours, but a great position to see them from another perspective. Sat for a while: a few summit pictures as I enjoying the sun and the last of my food supplies, before heading back down at 17:00. 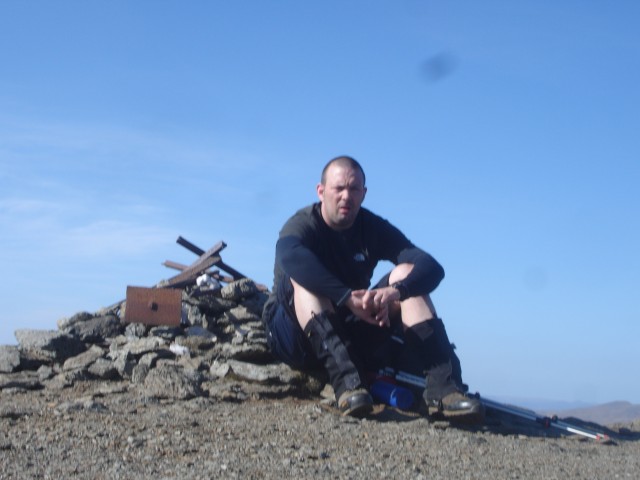 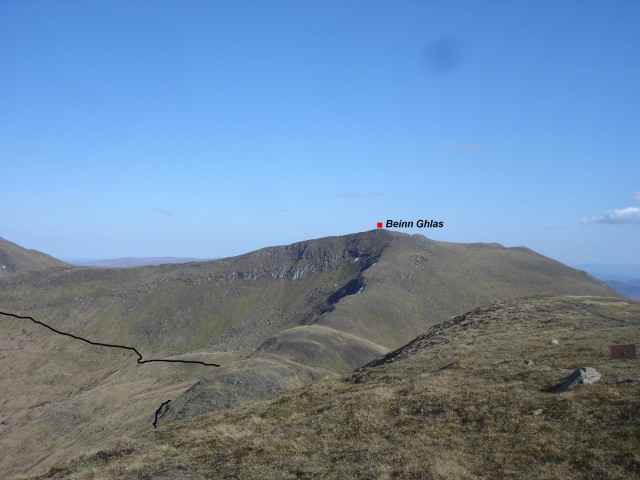 Once back on the return path to the car park, it wasn't long before I re-joined the nature trail path I had followed on my way up the hills earlier in the day. A couple more pictures to make a full round of the route and I was back in the car park by 17:50 to find Jessica, Chase & Hunter waiting for me. 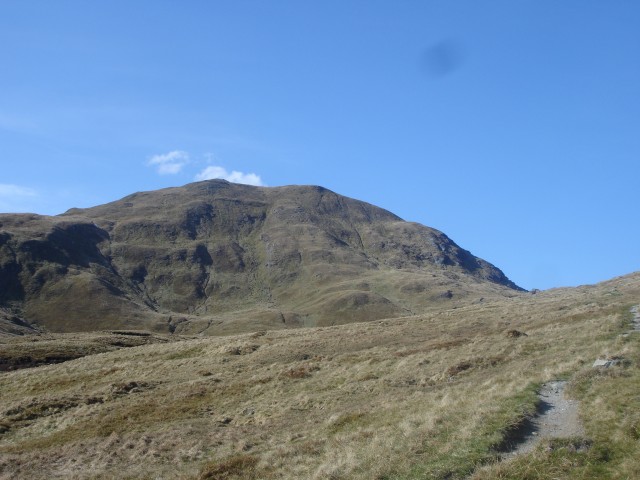 14. Meall Corranaich (looking back) from return path to the car park. 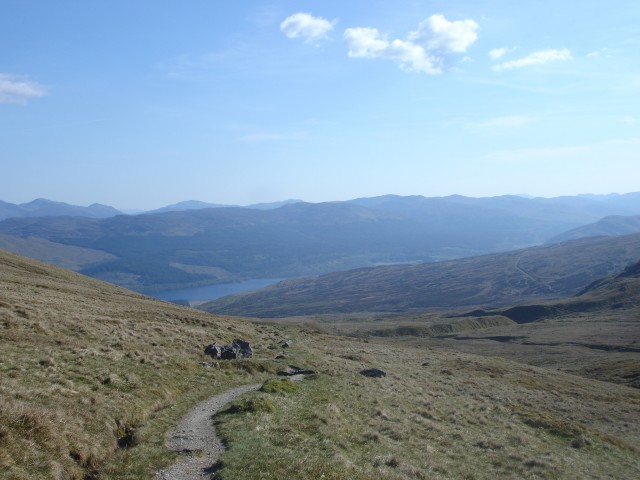 A great day out, back in the hills... official times are as follows: