Squelchy is my middle name!

Squelchy is my middle name!


Somewhere in the neverending bogfeast between Loch Ness and Glen Affric lies a group of obscure Grahams. Visited only by the most dedicated baggers, these hills are mostly pathless, wet and featureless. The only exception is Meall Fuar-mhonaidh, situated close enough to Drumnadrochit so it serves as a local viewpoint and has a well-worn path to the summit.
We have climbed Meall Fuar-mhonaidh before, an afternoon summer stroll by my standards. It's a popular route even for non-hillwalking tourists, basically everyone goes up there to see Loch Ness from above and maybe, just maybe catch a glimpse of the famous monster...
But those using the traditional up-down route will never see the true face of Meall Fuar-mhonaidh, its vertical NW face, towering over Loch nam Breac Dearga. Across the loch, a second Graham, Glas-bheinn Mhor, looks very boring and insignificant, but we haven't done this one yet so an idea of a circuit of Loch nam Breac Dearga was born.

It was a wet, windy Tuesday and because weather was said to be c**p everywhere, we decided to climb this pair as they are one of the closest hills to home. That gave us the pleasure of long lay-in, until 7am he he he.
The morning was dry but low cloud was "cooking up" showers as we drove down to Drumnadrochit. We parked in Grotaig and followed a well signposted path.
Our route:

Track_DRUM GRAHAMS 26-07-16.gpx Open full screen  NB: Walkhighlands is not responsible for the accuracy of gpx files in users posts
Of course, we didn't expect clear summits, but somewhere deep inside I hoped... Maybe for a glimpse of views... But as an old Polish proverb says, hope is the birth-mother of all fools.

Meall Fuar-mhonaidh from the path below. Cloudy of course. 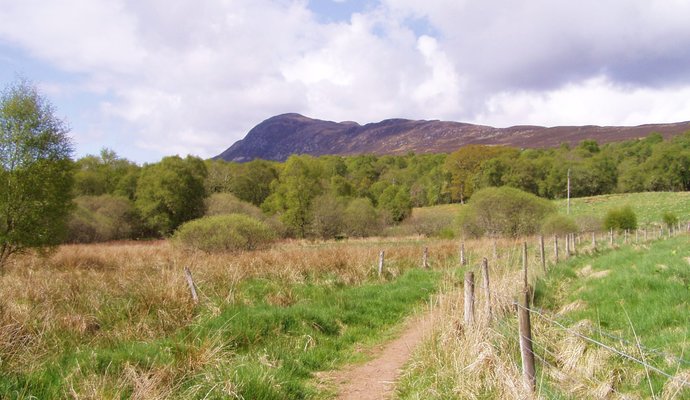 The path climbs up heathery slopes and to begin with it's not too bad, even on a wet day. We were below the cloud at the moment and still had some views, the best ones are obviously down to Loch Ness:

The north end of the loch: 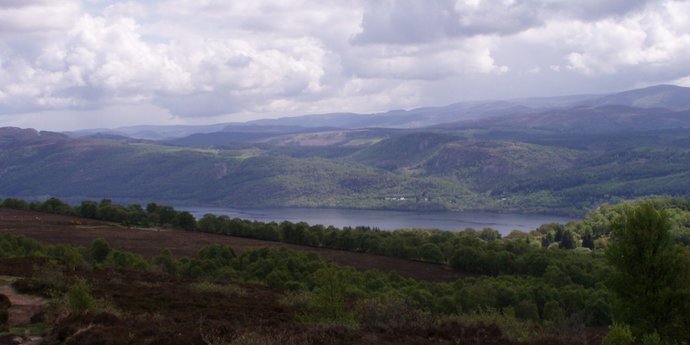 Having reached the ridge itself, we had to negotiate a stile: The path continued up the long whaleback ridge of the first Graham. We quickly noticed, how badly eroded it is now. It was nowhere near as bad in the past, I must say that since I first visited this hill in 2008, the erosion has taken an enormous toll

Higher up on the ridge, there are some really squelchy, boggy places, where tuft-jumping abilities come in handy

Looking down the ridge with views to Loch Ness:

The result of erosion: 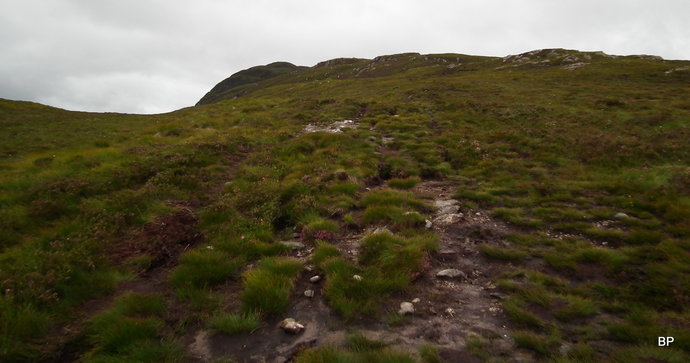 The cloud was down to 550m or so and as soon as we entered the clag, a drizzle started as well. We reached the summit without feeling much satisfaction, really, as it was a repeat Graham for us and without the views it felt somehow pointless to be there. We felt surprisingly cold as for July, so hats and coats came out of rucksacks...
Not very happy Kevin is at least trying to cover his misery with a smile... 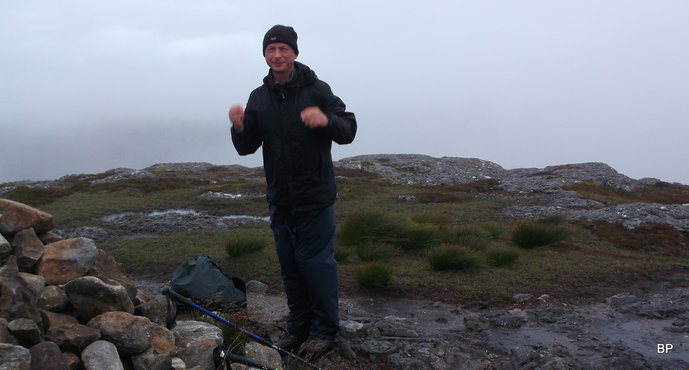 After a few minutes there was a short break in the cloud but we still didn't see much: On a good day, this Graham offers superb panoramas of Affric hills on the western horizon: Today's conditions didn't show any signs of improving, so we left the summit and descended the southern spur of the ridge. It's not possible (or very reckless to say the least) to attempt a descent straight west from the top. One would have to find the way down this: 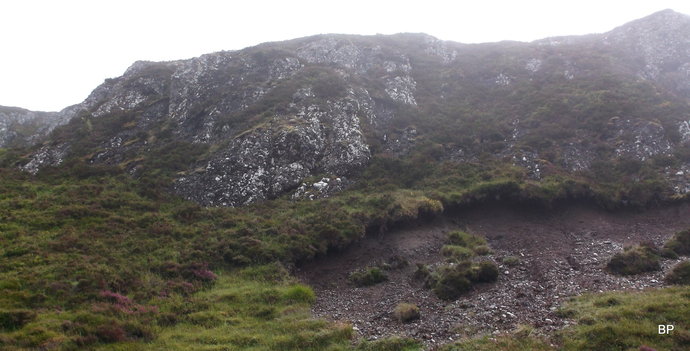 We traversed as far as possible along the ridge (no path, but mostly grassy going, a few scattered peat hags), before descending north along steeper slopes towards Loch nam Breac Dearga. The cloud was lifting a bit, thankfully, and we could admire the loch itself:

Our first glimpse at Glas-bheinn Mhor, emerging from the clag:

Just where a small stream flows out of the loch, there is a small cairn. Maybe it is supposed to mark a path of some sort, but we couldn't find any signs of path anywhere. We stopped for a breather and took the opportunity to photograph the NW face of Meall Fuar-mhonaidh: 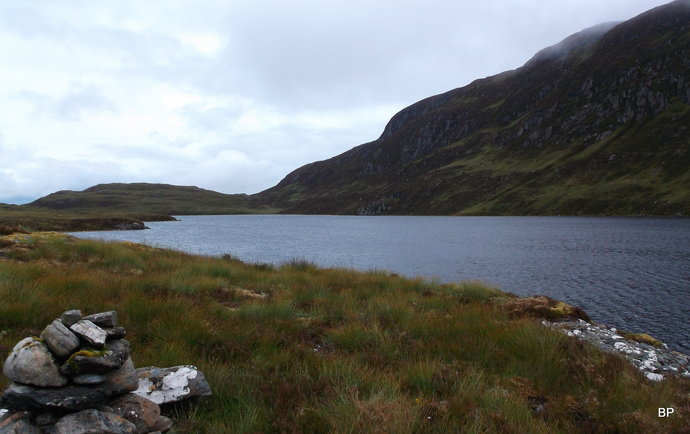 Vertical cliffs falling down to the loch: 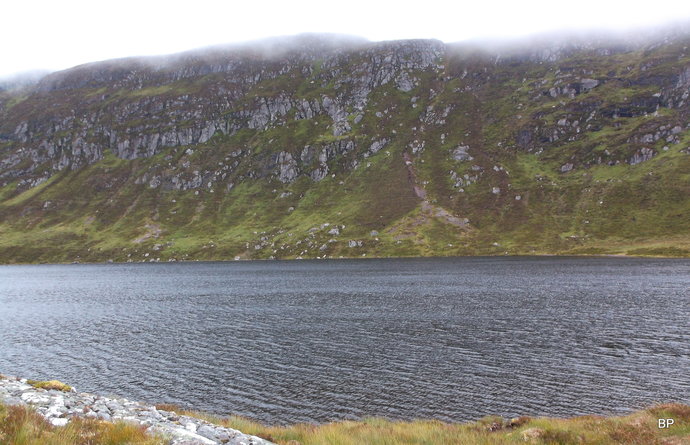 The climb to Glas-bheinn Mhor from here is less than 200m and it looks very easy, but don't be misled by the green, inviting slopes!

The whole hillside is one giant, squelchy experience and those without good goretex boots are not welcome!

As we began the slog up to the second Graham, stronger wind picked up and we decided, it was time for woolly hats and gloves. Hats and gloves! In the middle of summer!!! Ahhh, I forgot: it's Scotland. Anything possible in this wild country We circled around a 559m outlying top and traversed above Loch Ruighe an t-Seilich (a long name for such an insignificant body of water). There were remnants of a path here and there, but mostly it was a slalom to avoid the most boggy spots. Views behind us, thankfully, sweetened up all the butter struggle. The NW face of Meall Fuar-mhonaidh with the loch at the feet of the vertical wall, well, it's a view worth the squelchy trudge!

The track seen in this photo can be used as an alternative approach to the two Grahams, either from Glen Moriston or from Alltsigh, but no matter what you do, you still won't escape the squelchy finish 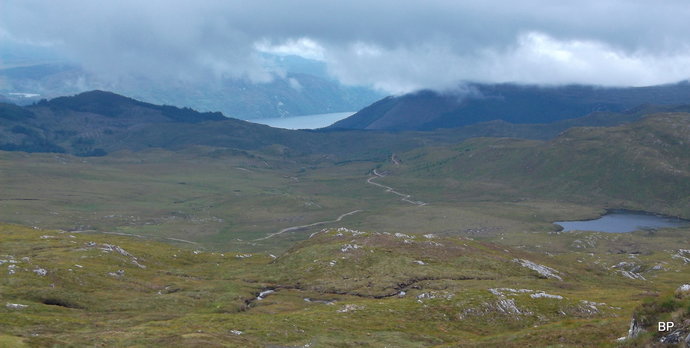 By the time we reached the summit, cloud has descended again onto Meall Fuar-mhonaidh, but our top stayed below the clag, so we had at least some views. No chance of Affric panoramas, but better than the first summit.
Lucy and me posed at the trig point - my 53th Graham, Lucy's 20th 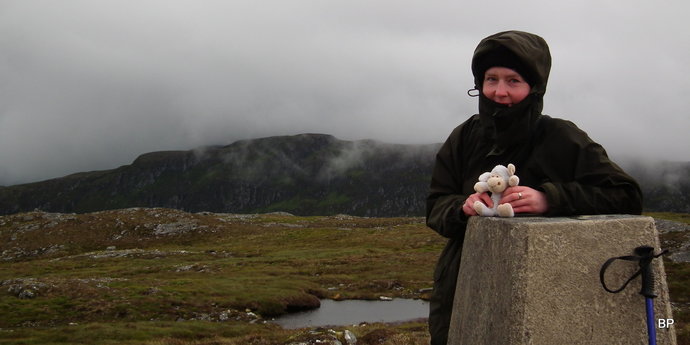 What we saw from the top. To the south, more cloud was gathering with a fat chance of rain... To the north, Loch Ness looked rather tranquil... 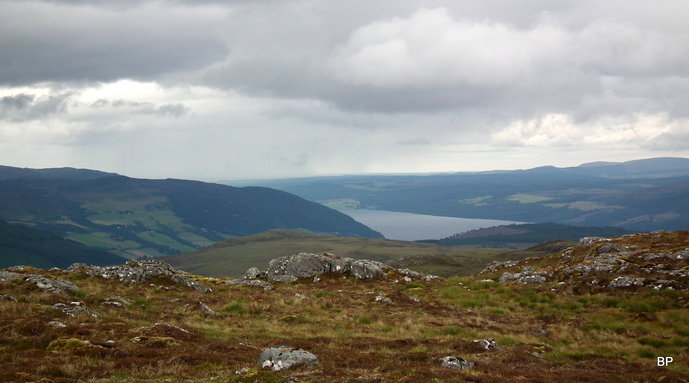 Ben Wyvis should be here, but it's been nicked This track comes from the north, from A831 but it leaves a low glen to cross if one wanted to approach Glas-bheinn Mhor from this side: The summit was windy and very cold, so after a photo session and a quick snack, we packed up and started the not so long but oh so squelchy trudge back to beaten track. It does not look far a crow flies, but due to bog and peat hags it's simply impossible to walk this in a straight line.
We reached the north end of Loch nam Breac Dearga when we noticed a dark cloud coming from the south, a shower closing up: The last photo before the washout: Climbing back to the summit area of the first Graham looked like an impossible task...

...but we managed to find a narrow path traversing below the cliffs. We left it at some point and scrambled a short distance over the wet vegetation to the main ridge of Meall Fuar-mhonaidh, where we joined our original route. By now it was raining cats and dogs so we walked back to the car park accompanied by squelchy sounds of our boots getting sucked in by boggy ground. Still - mission accomplished!
.................
Forecast for the following day gave us some hope for slightly better conditions in the east, so we grabbed the chance to visit two very remote Munros. More details of this knee-bruising experience in my next story.

Re: Squelchy is my middle name!

That delightful squidgy boggy experience seems to go hand in hand with Graham's....

Good on you for sticking with it

Re: Squelchy is my middle name!

Good on you for sticking with it

And it doesn't look like weather is going to change, so there will be more squelchy walking this summer for sure.

Users browsing this forum: Kronos24, nikkisloan, Ollie and me and 131 guests