The hills were alive with the sound of water.

The hills were alive with the sound of water.

Bow Fell-Rosett Pike-White Stones.gpx Open full screen  NB: Walkhighlands is not responsible for the accuracy of gpx files in users posts
Monday morning dawned not as the weather forecast predicted dry and sunny with showers during the afternoon but dry and cloudy, warm with a touch of damp in the air. As Chris and I drove towards Great Langdale with the intention of getting more than a handful of tops in the weather got decidedly more dire as we approached Keswick with the wipers giving the occasional burst of activity to clear the fine covering of water from the windscreen. This gave us no cause for concern as both the MWIS and Weatherline had promised a more or less fine day with the threat of rain during the afternoon as had the local forecast. But as we got nearer to Langdale the weather worsened with the clouds now hanging low in the sky and there was more than a misty drizzle falling.

Our plan of taking on Bow Fell, Crinkle Crags, Cold Pike, Pike O' Blisco and some bits and pieces was not in danger, just yet. We duly arrived at the ODG and having previously paid my yearly fee used the National Trust car park which was host to maybe four other cars. It was now more than a light drizzle with the clouds going nowhere just yet but we had everything crossed as we donned wet gear and bags before setting off along the road to follow the track to Stool End from where we would start to climb The Band. 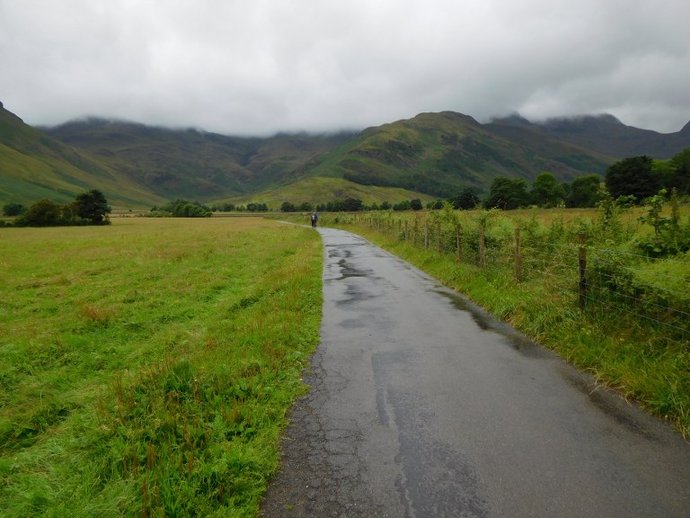 The lower part of The Band below the cloud.

There was another couple just in front of us who turned off to take the path towards Oxendale Beck from where they then started to ascend the steep path that runs under Brown Howe and alongside Browney Gill in its higher reaches. Where their destination was we don't know but we could see them creeping slowly upwards as we ascended The Band, but we had our own walk to think about so took no more notice of them as they began to disappear into the cloud. 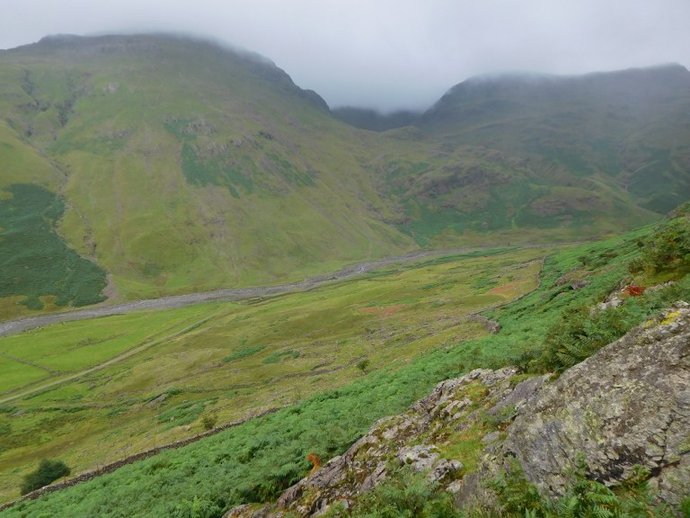 Looking to Markeens and Brown Howe from The Band. 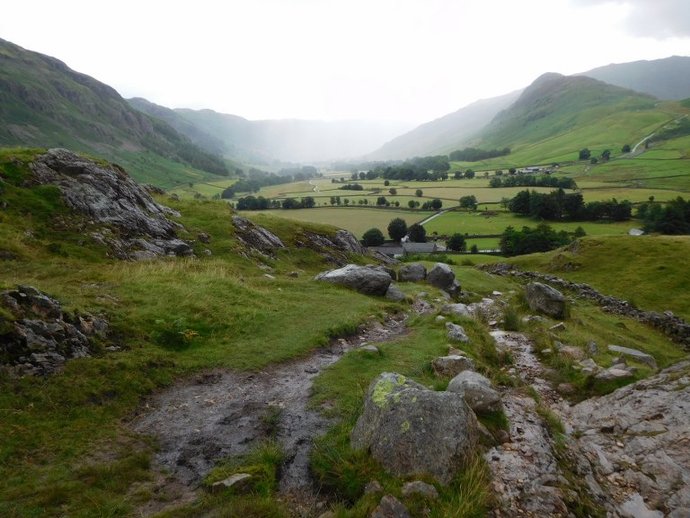 Looking into Great Langdale from behind Stool End.

The rain was beginning to fall a little harder with water starting to run down the path that is a mixture of paved and gravel sections with a few rocky bits chucked in to keep one alert. The rocky bits were a bit slippery so feet had to be placed appropriately to get a good hold whilst pushing up.

Roughly halfway between Stool End and Three Tarns there is a slightly higher hump on the right hand side by the name of White Stones and that was our first port of call to bag the 568 metre high Birkett. It rises not much higher than the path, is easy to get to with a short stroll past a couple of small tarns and some boggy ground with a slight rise over grass to reach the grass and rock covered top. On a good day the views would have been fantastic but today there is nothing but clag to point the camera at. 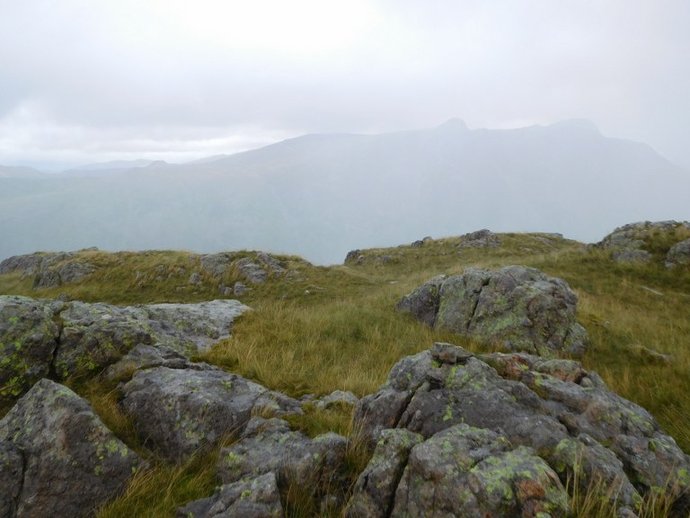 A man and his son passed us earlier on their way to Bow Fell but we met them on their return as they had abandoned the attempt due to the rain that was now falling quite steadily.

Having now left White Stones we continued ever upwards towards Three Tarns but before we arrived there we had made the decision to just get to the top of Bow Fell and drop off down the north side to Ore Gap from where we would take the path down to Angle Tarn. 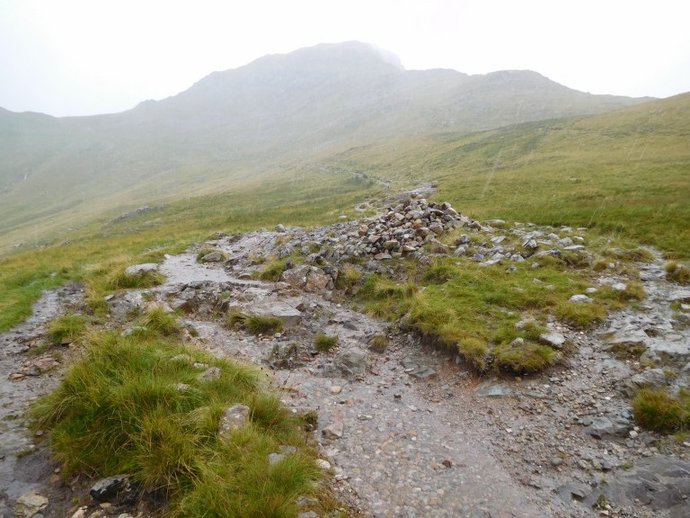 The rain had begun to fall in buckets by the time we had reached Bow Fell summit with the paths running like streams and there was no pleasure in lingering at the summit after a shot of Chris posing in the rain. 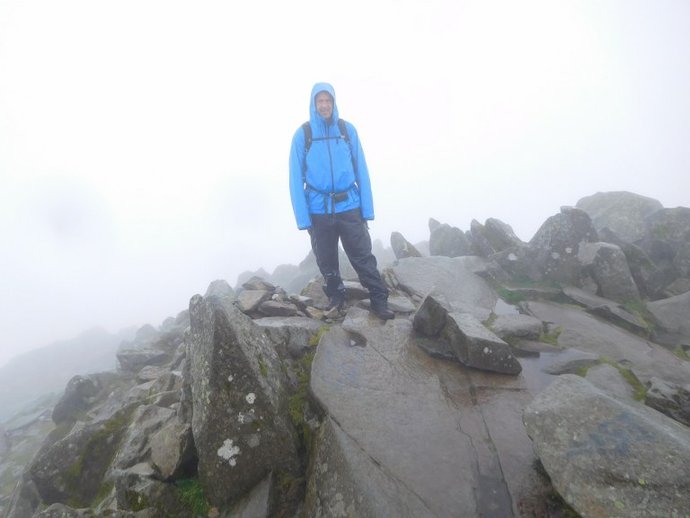 As we set off down to Ore Gap we met three people on their way up who had arrived from the ODG and were returning the same way. We never saw them again but must admire them for climbing up from Angle Tarn as the paths were a lot wetter there than the ones that we had just walked. Now it's our turn to fight the rapids.

It was a careful climb down through the rocks as we left the summit until we got on the easier path leading to Ore Gap from where we started the long downhill trail through water as there was no getting away from what was running down the hillside. I'm not keen on this path on a good day so today, for me, is not a good one for fighting my way down on a path that is more like a stream with the water spreading everywhere either side of the path making for difficult choices of the best descent. 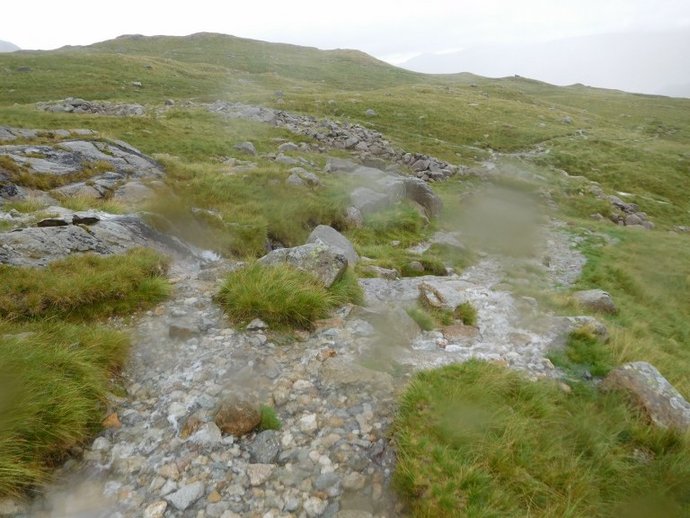 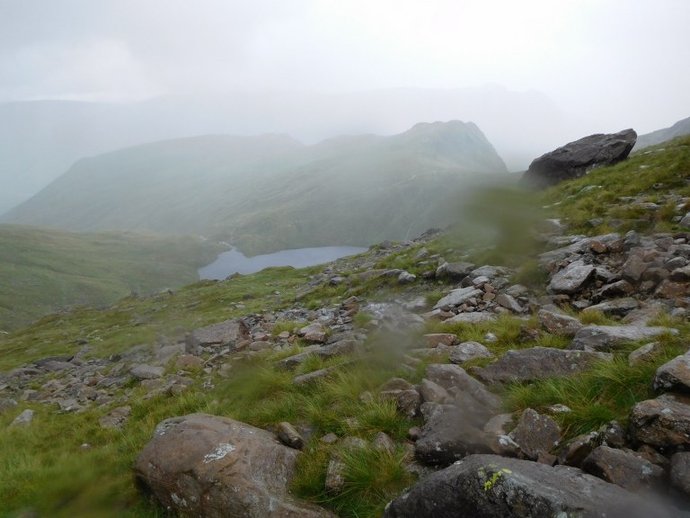 There were numerous streams running down Hanging Knotts as well as the fellside into Angle Tarn and had it been a Norwegian Fjord on a nice day it would have brought gasps of wonder from the sightseers. 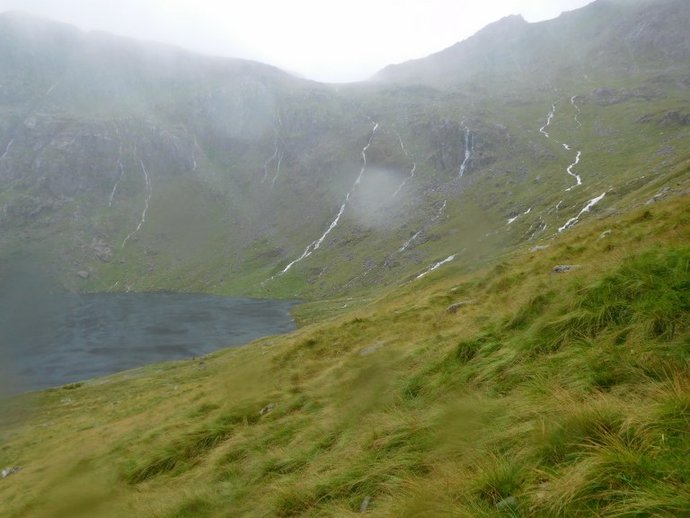 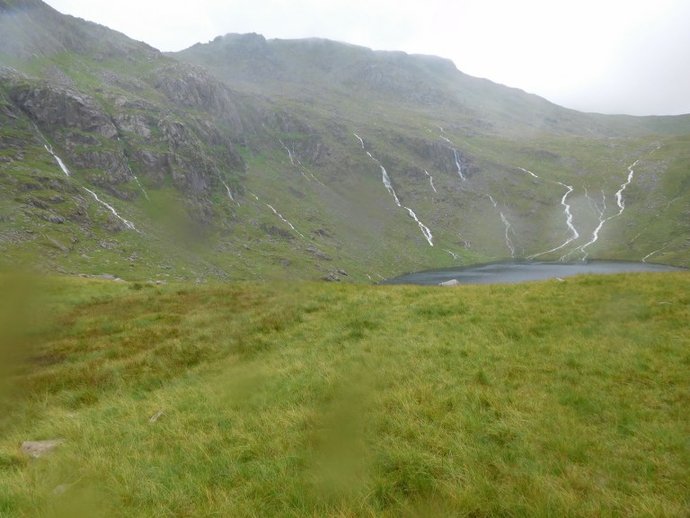 Once having reached the main path that continues down into Great Langdale we followed it past the tarn to stop at the foot of Rossett Pike before deciding - as Chris had never been up it - to give it a go. 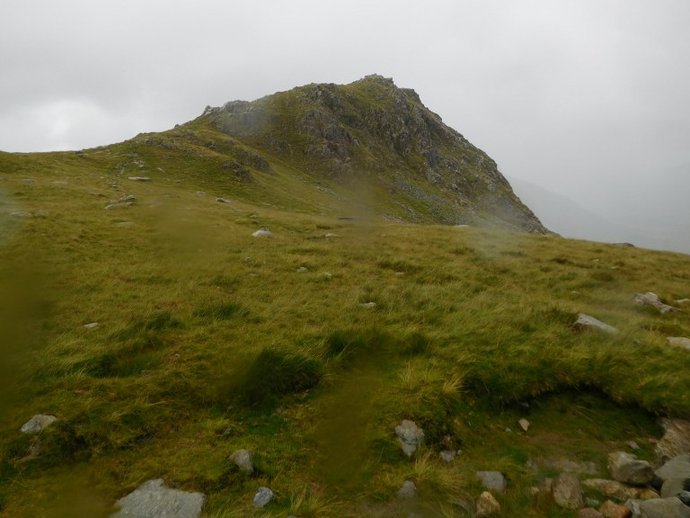 It's only a short and easy walk up to the summit from where the views were once again zero quality apart from looking across Angle Tarn towards Hanging Knotts. 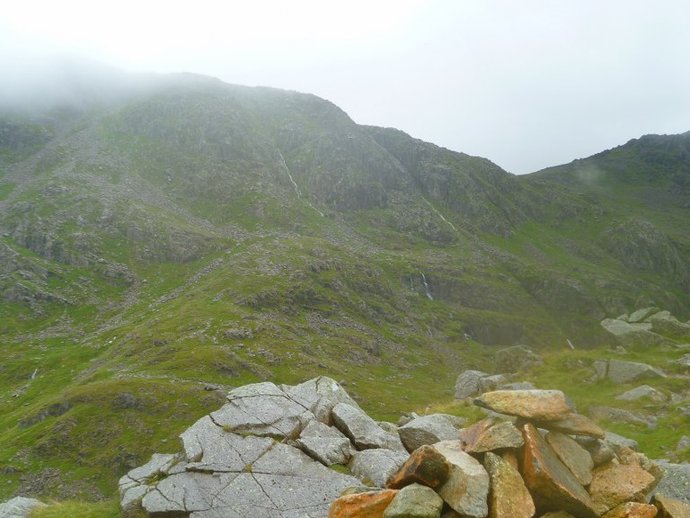 We could see quite a large group of young ones who were either on the D of E or some Outward Bound activity but they were way back so we didn't get the chance to speak to them. 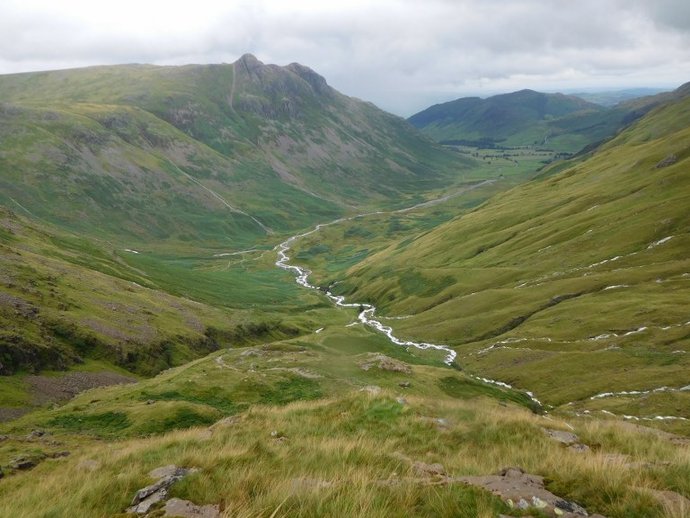 Leaving Rossett Pike behind us we set off down the engineered path alongside Rossett Gill and once down to the appropriate spot I took Chris and introduced him to the pack woman's grave where we sat and had a quick drink and a bite to eat, our first of the day as by now the rain had eased up quite a bit. 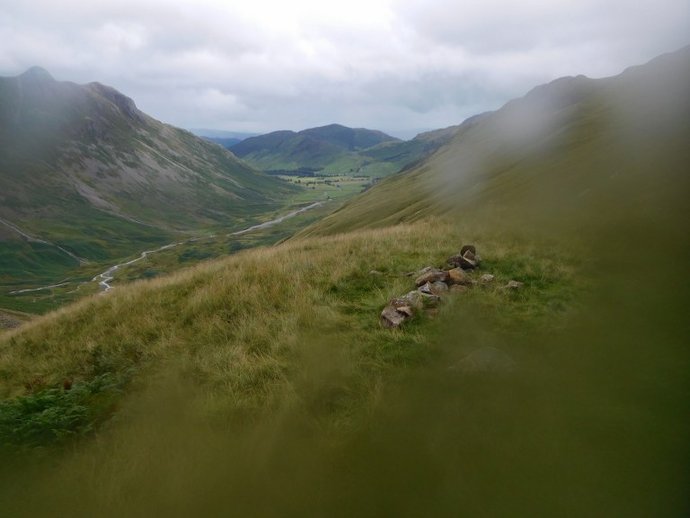 Langdale from the pack woman's grave. 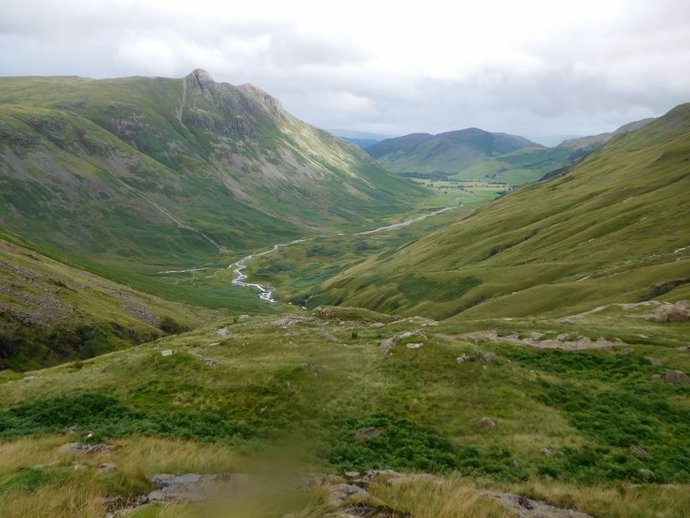 Mickleden and Langdale from the pack woman's grave site.

There was nothing more to do but clamber down the fellside using the old path by the side of Rossett Gill until we reached the paved path once again which gave us a bit of sport in the way of jumping over the many torrents of water that was gushing across the path. In fact higher up the path, just about where it narrows to pass through some rocks the path had been damaged by some previous downpour causing a large boulder to fall onto the line of the path.

We eventually reached the footbridge over Stake Gill… 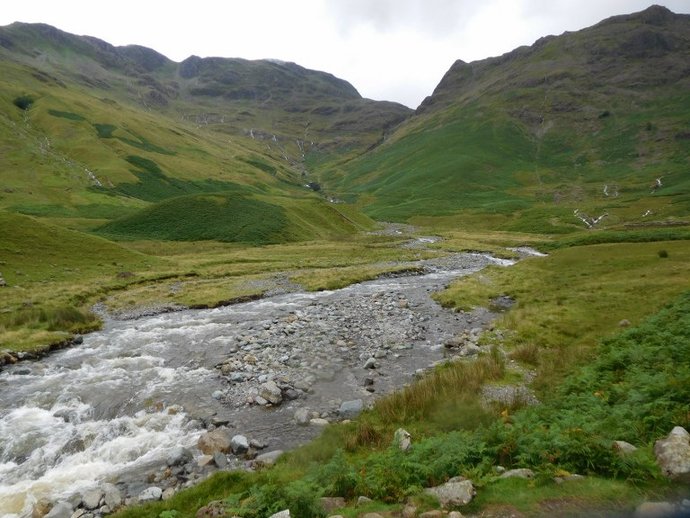 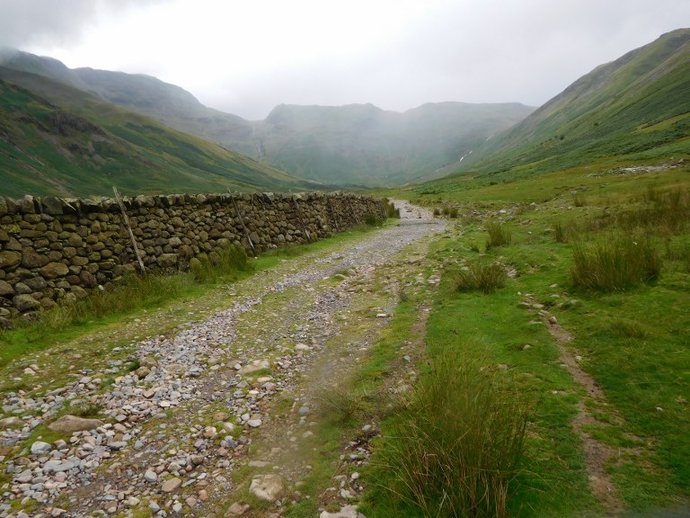 Looking back to Rossett Pike - Buck Crag and Black Crags.

alongside Mickleden Beck to arrive back at the ODG frustrated by the weather but happy that we had at least got a day's walking out of it. After a quick taking off of our waterproofs and boots it was then a quick dash into the pub for a welcome couple of pints to round the day off nicely.

, It was definitely the wettest walk in my first year walking in the lakes raindrops the size of hailstones (as I remember!)

especially with a couple of well earned beers at the ODG

There's always something impressive about how much water pours off the hills on wet days.

Wow! Impressive fortitude there to keep persevering in those conditions. Still, the pic of Angle Tarn being topped up are almost worth the soaking - magic!

I did Bow Fell in clag a few years ago, but fortunately it wasn't raining - I don't think I'd have completed the round if it had been (yes, I know: a weather wimp!).

, It was definitely the wettest walk in my first year walking in the lakes raindrops the size of hailstones (as I remember!)

especially with a couple of well earned beers at the ODG

Cheers TFW and pleased that you enjoyed the albeit, wet day out

Thanks for your comments

There's always something impressive about how much water pours off the hills on wet days.

Thanks for reading MG

and on this day it certainly was impressive

Alteknacker wrote:Wow! Impressive fortitude there to keep persevering in those conditions. Still, the pic of Angle Tarn being topped up are almost worth the soaking - magic!

I did Bow Fell in clag a few years ago, but fortunately it wasn't raining - I don't think I'd have completed the round if it had been (yes, I know: a weather wimp!).

Thanks very much for your comments Alteknacker

We've all been weather wimps at one time or another

and better to be safe than sorry

Great (if a little damp) stuff TM, I'm not sure I would have had the perseverance to keep on going wet boots and all

ChrisW wrote:Great (if a little damp) stuff TM, I'm not sure I would have had the perseverance to keep on going wet boots and all

Sometimes one just has to go for it

and we're not made of blotting paper