Thinking feet and a poet's ghost

Thinking feet and a poet's ghost


The goal for today was clear - it had to be at least one Munro no matter the weather. During my one-week stay in Scotland, I had so far only climbed Munros on two of four days - the day before was entirely "lost" to Hillwalking due to the bad weather, and I spent it by taking the train to Corrour and strolling around Loch Ossian in the rain.

(It felt a lot less remote than I had expected, as there were woodworks going on, cars passed on the track going to a hydro scheme work site and the dogs at Corrour Shooting Lodge caused quite a commotion. However, it was a fine day thanks to a very nice encounter with a gentleman on a very special errand to Loch Ossian, and we had some early dinner together at Corrour Station and a pleasant train trip back to Tyndrum, where he stayed as well.)

So which hill to climb today? After some pondering about this question during breakfast, I chose Beinn Mhanach, as navigation did not seem difficult, and it is one of the lower Munros in the area with maybe the best chances for a cloud-free summit.

When I arrived at the small lay-by near the turnoff to Auch estate, there was already a car with a hillwalker just leaving towards the valley. My small rental car easily fit behind the other person's car, and I soon followed him down the asphalt road towards Auch. The weather was not too bad, overcast with the clouds higher than expected, but - of course - not high enough to have free summits. Beinn Dorain with a little "hat" in the morning

I quickly passed by Auch Estate, crossed the Allt Coire Chailein and followed the track leading into Gleann Achadh-innis Chailein, passing underneath the North viaduct of the West Highland Line horseshoe curve. 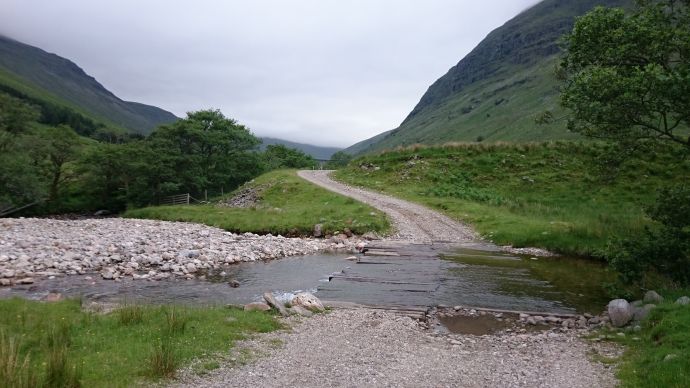 The track was broad and easy to walk. The several fordings of the Allt Kinglass did not pose any problems, as the water level was low. All in all there was less water in the streams and the ground was much less soggy than I expected during the whole week - it must have been quite dry here before I arrived in Scotland. The grassy flanks of the hills on either side of the valley were of a lush green, and the air was comparatively calm, very comfortable for walking. After roughly 6 km and 1h20 of walking, I reached the ruined farm house and sheepfold at Ais-an t-Sidhean.

According to the Websters' wonderful Munro guide book, this was once the hut of the Gaelic poet Duncan Ban MacIntyre, whose most famous poem admires Beinn Dorain (which made me think I could have liked him: Beinn Dorain or the beginning of it all).

The honour o'er each ill
Hath Ben Dorain;
Scene, to me, the sweetest still
That day dawns upon

Being a gamekeeper, he was not very fond of the many sheep leaving the hills bare. After his death, his hut was converted into a sheepfold. I mused for a moment about the various sorts of irony life can have in store for you, and whether the people who turned the poet's hut into a sheepfold knew of his aversion to sheep.
Perhaps MacIntyre might have appreciated that at least today there were no sheep present, but certainly there was a little bit of poetry in the air in form of the beautiful foreground his old farm house offered for a look back down the valley. The poet's house, Beinn a' Chaisteil in the clouds I can understand why Duncan Ban MacIntyre liked it here...

Before I left, I toyed with the idea of adding the two Corbetts Beinn nam Fuaran and Beinn a' Chaisteil to the walk. Both were well visible to the left, and did not look intimidating, so I kept them in my head as an option. The top of Beinn a' Chaisteil was still in the clouds at this time.

When I approached the end of the valley, I saw the man who had left before me already climbing the flanks of Beinn Mhanach straight ahead, apparently opting for a direct ascent. The ground seemed difficult, as he often turned around, looking for a better way up.
Back here, there was more wind, so I had only a little bite to eat and continued along the track that leads around Beinn a' Chuirn to the left. After the long and almost level walk-in, the relatively steep ascent was a welcome change for my thighs. Passing many sheep bones - the ghost poet's revenge? - I came to the end of the track after crossing Allt an Lòin. From here on, my route led me up the grassy flank of Beinn a' Chuirn. The clouds hung low, so I did not see where to aim except going steadily upwards. The map showed a fence leading up to the saddle between Beinn a' Chuirn and Beinn Mhanach, so I went more northerly until I reached it. Looking back along the fence Following the fence up to the saddle was no problem despite some quite boggy patches, and I soon entered the clouds. On the saddle, the fence changed direction for a short distance, which is where I left it to go up the flank of Beinn Mhanach more or less directly east.

The fog was quite thick, and the wind much stronger than in the valley. All of a sudden, the other hillwalker appeared in front of me, walking towards me maybe 20 metres to the right, i.e. in windward direction. I called out to him, but he did not notice me - his gaze was fixed on the compass in his hands, his head hidden in the hood of his raincoat, and in a matter of seconds the fog had swallowed him up again behind me, just like a (poet's?) ghost passing by...

To find the summit, I constantly aimed for a direction where I assumed that the upward sloping bits of horizon line I could see to my left and to my right would meet. The procedure worked, and could enjoy a moment of blindness at the summit cairn.

Going down, I used the compass to meet the fence that brought me up the saddle on its Southern side, where the fence went straight downhill. Even before I reached the fence, I was below cloud level and could again see where I was going. Beinn a' Chaisteil was now free of clouds, so the prospects looked good. Coming out of the clouds, the two Corbetts in the clear

In not even half an hour, I was 500 m further down on the track leading to Loch Lyon. I finally had my lunch next to the track, in much more enjoyable conditions than on the summit.

Now how to return to the car? The walk in was nice, but it seemed tedious to go the same way back. The route via the two Corbetts was certainly more interesting, but Bein nam Fuaran looked even steeper from down here than it looked while I was walking down the similarly steep side of Beinn Mhanach.
Furthermore, the weather forecast for the next days was excellent, and I intended to try the four Tyndrum Munros Ben Lui, Beinn a' Chleibh, Ben Oss and Beinn Dubhchraig and wanted to save some energy for this.

The decision tortured my mind for a long 15 minutes, I felt like stunned and torn between the reasonable, yet boring same way back and the more exciting and more strenuous way via the two Corbetts.
I was pacing up and down the track almost like a caged animal, when suddenly my feet took matters in their own hands and started walking down towards the stream to reach the slope on the other side. I found this quite interesting and even mildly amusing and followed my feet to see where this would end.
At the stream, the brain had to interfere briefly, as there was no easy way to cross. I used the bridge on the track instead and was curious whether my feet would follow the track back through Auch Glen.

They didn't, and I still had the feeling of watching some other guy walk with a purpose, as my feet led me to the fence that ran up Beinn nam Fuaran. Arriving there, I resigned myself to the decision my feed had taken and began to toil uphill. I have rarely climbed such a steep slope and gained a lot of altitude in little time. Looking back to Beinn Mhanach (on the right), it would never be clear of clouds on that day

The further I got up, the more frequently I had to take a short break, but eventually the gradient became less steep, and the summit of Beinn nam Fuaran was reached quickly. From there, I had to go slightly to the left to avoid some rocky sections and came to Mam Lorn, still more or less following the fence. The section uphill to the summit of Beinn a' Chaisteil was of course steeper than it looked, but on the summit I was rewarded with a magnificent view of the famous West Highland Line horseshoe curve. By this time, my feet had long been forgiven by the brain for the decision they took, and I was glad not having walked back in the valley below. The clouds approached the summit again, so I left rather quickly, still following the fence until I finally left its course at altitude 720 and turned right, straight down into Glen Coralan, enjoying the view of Leithir Tharsuinn, shutting off the valley and blocking the view towards Breadalbane.

From down in the valley, a good track led me back to Auch Estate, this time passing underneath the Southern viaduct. I'd love to have taken some photos of a train passing the viaduct, but my timing was not lucky - there was no train until I was almost back at the car, and even with the zoom, the train looks tiny. Beinn Dorain and the train

After the relative remoteness and loneliness of the walk, the rushing traffic on the A82 was kind of an anticlimax, but the prospect of a nice dinner made me soon join it to drive back to Tyndrum - with full control over my feet in the car.

20160617_wh.gpx Open full screen  NB: Walkhighlands is not responsible for the accuracy of gpx files in users posts