Creag Meagaidh, through the windy, Windae!

Creag Meagaidh, through the windy, Windae!


Forecast looked favourable for another trip with Jaf and long time target, Creag Meagaidh was selected. Mostly nice and sunny on way north, till last few miles along Glen Spean, when we were vanished into pretty thick fog. Was also a bit cold and breezy, as we got the gear on at the car park at Aberarder, but then again, it was only half seven in the morning. Who's idea is all these early start's? West, above the inversion to Stob a'Choire Mheadhoin, Chno Dearg.

Forecast was for an improved morning, but thankfully, I opted to take along a heavy duty top, at the last moment, as Charles donned another layer. We followed the excellent path, up to the cairn where one leaves for the open hill, where another early starter emerged from the fog, at this point. We moved on quickly, though there are a few wee boggy bits here and there. Nothing too bad, however. Jaf, on way up Carn Liath. First look at the windy, windae :) Familiar view of Big Jasper, on most walks! Blue skies. What can go wrong?

By now we were above the fog and enjoying a bit of an inversion and views towards the Window and Creag Meagaidh. Surely, it would clear! The steady gradient made for good progress (for Big Jesper

), as one heads NW, over the stony stuff, before making a bit of a right turn, along the flat top, towards the summit of Carn Liath. By now a right stiff, cold breeze had got up, so we didn't linger long. It wasn't long before an extra layer went on top of the t-shirt, as we strode off, on the longish hike toward Stob Poite a'Choire Ardair, just about visible in the distance. Pretty uneventful over this stage, aside from the wind probably getting even stronger, forcing us to take refuge behind a large boulder, for some grub.We didn't find it too easy to be sure what the summit cairn was, of three cairn's along the ridge here, but our suspicions of the most westerly seem borne out by others. 
View of Creag Meagaidh, suggested our hopes of any views were in vain and ...time for another layer

Just as well, I had followed Jaf's lead back at the car!
We made our way down to the Windae and sure enough, it was windy! It was about here I had to change one walking boot, which was chaffing, annoyingly at my ankle. Second guessing this possibility, I had taken a pair of walking shoes with me. Because it was so windy (and because the other foot felt fine), I only changed the one

Well, there had been no sign of anyone else, so who would notice? 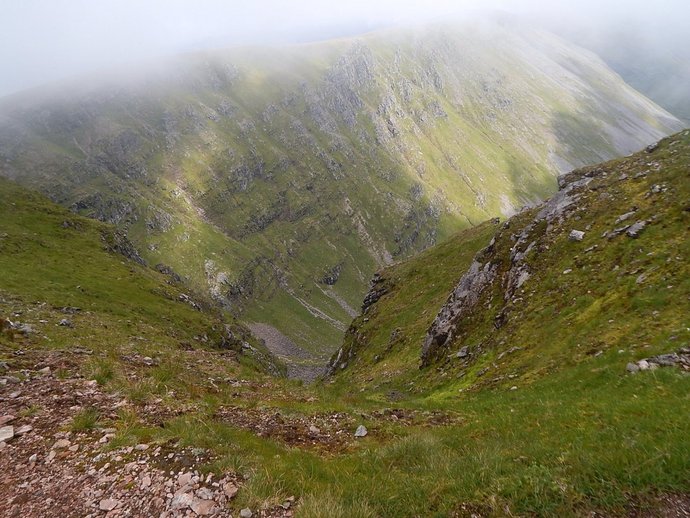 Steep gully and look back over to Stob Poite a'Choire Ardair Having made it up from the bealach, visibility was now very limited. There is a semblance of various paths, which could be tricky, but a brief glimpse of Mad Meg's cairn, gave us an easy bearing and likewise, another clearing, gave us the road to our 3rd summit, by which time the wind was fair howling, over moorland and mountain

Was this really the 2nd of August? Even communication was quite hard here, so after a couple of pics, we set off back to the Window. Another bank of fog rolls in. View of Lochan Coire Ardair, on the return to the bealach. 
Back at the bealach we met a young, female runner, whom we could only admire, for her fitness and endurance. She had already decided Creag Meagaidh was nor for her today and set off, down the Window, soon leaving us well behind. We met a few other groups of walkers now ascending the Window, which was now more out the wind, but hopefully, one lightly clad lad, wasn't intent on doing CM ... and likewise, hopefully, none were too observant and looked at my feet Back up to the Window. Steeper and trickier than it might look. 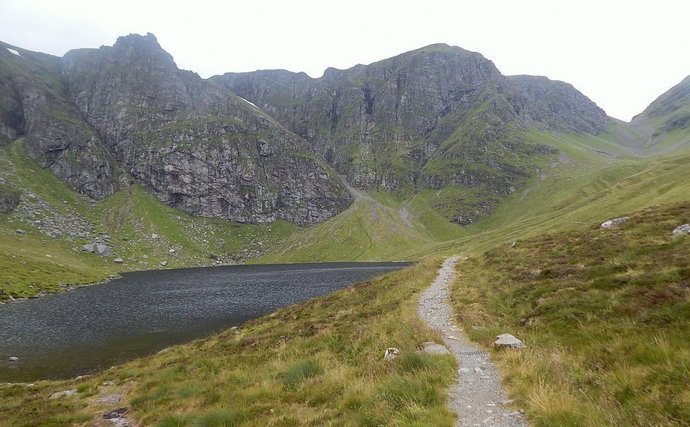 
We stopped for more grub and to admire the steep cliffs, before making the longish hike, back along the fine path. Felt we had missed out on some fine views, but with the wind at our backs, were quite pleased to have made it round in just over the six hours Down to Loch Laggan and Ardverikie. Mad Meg's cairn. A climb in itself. Good report and some beautiful shots !

Glad you had the views and the inversion was a bonus

Great memories from there when I did the circle in winter conditions, nice to see it in summer green for a change

Fantastic day out Jimmy. Lucky and slightly unlucky with the weather but a thoroughly enjoyable day. Can't wait for our next trip away.

That first photo is stunning!! Shame about the weather after that, but hey, it's atmospheric

Nice report and pics, notwithstanding the odd bit of clag. Don't know these at all, but they look very characterful => on to the bucket list!

Thank's all, for kind comments. A nice hike for sure, but would be quite a challenge in winter conditions ....... for us pair anyway! There's been more than a few accidents up there.

Users browsing this forum: Alan B, JimboJim, natubat and 53 guests