Had a meet up planned with Graeme/BigZane as we hadn`t saw each other for a couple of years and was hoping to take him up Goat Fell as although he grew up looking at it every day he`s never actually climbed it , but alas the wind being quite strong meant there was disruptions with the ferry and had we got across we might have been stranded there .What a shame that would be

Having watched the weather we had left it quite late to start with the forecast suggesting it would be better as the day got on. And so it did.
We opted for the boggy approach starting by the bridge over the burn which had a couple of sinking moments but wasn`t too bad really. You can walk along a bit and see that another path has been used to avoid the bog and we used this one on our descent.
The sun was out and it turned into a good day for walking although we did get one rain shower which had us sheltering in the wee cave until it went off. But after that it was dry if a bit windy, especially on top. We took our time, blethering away as we went. Meeting walkers on their way down who were mostly caught in the rain and cloud at the summit we hoped we had timed it right. After a few wee scrambles and false summits we could now see the summit cairn teetering on the edge of the last climb. We were bang on with the timing and if it weren`t for the wind we could have sat there for ages taking in the views and basking in the warm sunshine.
Great day with a great pal, cheers 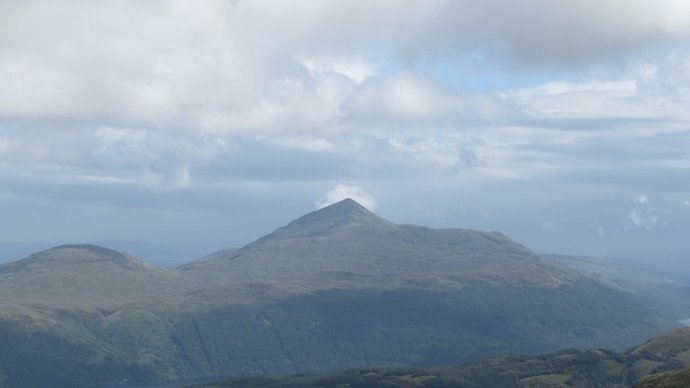 good stuff guys,,,,great u had views.