Entering the lustrous forest next to the railroad track, and heading straight uphill on a clear path through the dense under vegetation, is enough to get your body going and wake up your mind. Indeed, it is a good advice to start this trip early in the morning, since it takes the whole day to complete. The quick ascend takes you above the forest and the falls of Cruachan will stand out in the barren landscape ahead for you to follow.

The day me and my friend did this walk, the rain was pouring down, turning the trail into a minor waterfall itself, and it would not take long before we were soaking wet. As we denied the flow of the stream by going upwards, passing by long horned sheep, we could see nothing but dense fog higher up the slopes towards the mountains.

We reached the dam of Cruachan, an impressive dark concrete wall with vaults that makes your voice eco back towards the valley as you come close to it. During this foggy day, it was almost as if the wall was built to keep clouds from pouring down the valley and not only water. This view filled me with a sense of excitement as this wall of stone and fog left me with no sight of what was beyond. The ladder on the left side of the dam is clearly visible and easy to climb. Well up on the wall, the view of the reservoir, that fills the hollow mountain, will meet your eyes. It is a reservoir but there isn’t much living around it but grass, and it is clear that one is already on higher altitudes. The walk along the road on the left side of the reservoir is pleasant and in no time you will reach the end of it. Me and my friend were still soaking wet, but we were in a good mood as the track to the right of the reservoir began to take us upwards on the green slopes of Ben Cruachan.

The fog was still covering everything ahead of us, and it made navigation difficult. As our cloths got wetter so did our map, and for every time we had a look at it, it was slowly withering to pieces. The path is easy to follow up the first part of the mountain, but as is suggested in the directions given here on the site, there are different paths to reach the lochan and the final summit.

We departed from the trail to the left in the fog, and probably wandered off a bit too much in this direction, since we had to make a step climb on a rock slide to reach the lochan. To find the lochan was a relief, knowing that we were back on the right track, even if the fog was even getting denser and still leaving us with no sight of the top. All we could do was to continue the rocky path leading upwards, and follow sparse piles of stones that hinted to us where to go.

As I paid attention to the plain grey colour that surrounded me I could suddenly see contours of slightly darker shades resembling a peak, and lo and behold me and my friend soon found ourselves on the top. We saw no views of the grand landscape, and as far as anyone of us was concerned we could have been anywhere. Simply surrounded by a greyish void, we ate some food in a hurry. We were cooling down quickly; especially the hands that had been occupied grabbing cold wet rocks were getting numb.

The first part that descends from the top is rocky and step and one has to proceed slowly, but as soon as you start to follow the ridge towards Stob Diamh the path becomes easy and pleasant. Although we couldn’t see much, there were glimpse of step cliffs falling down the side towards the Glen Noe valley to the right, and we could only keep in mind that the reservoir was in the other direction. Since we had little means of navigation, and didn’t realize that the distant to Stob Diamh was quite far we made the assumption that we already had reached it, probably when we passed Drochaid Ghlas. This assumption, made it very confusing going on and realising that we were ascending higher and higher again. We also at one point started to head down hill, in order to find a path down, but had to turn back as we realised we was on the wrong path. We could do nothing but follow the visible path with occational shoe tracks, and hope for the best. The peak we though was Stob Diamh

Before the real summit to stob diamh, the fog for a brief moment cleared and we could get limited views of our surroundings. I could see the curved shape of Stob Diamh towards the valley of the Cruachan Reservoir, and I got convinced that we had not made it as far as we initially thought. Although I got this brief look of the mountain shape, my friend did not, and I could not convince him about our position. Once again there was only fog hiding the horse shoe shape of Stob Diamh .

There was no time to argue thou, and it wouldn’t matter anyway, since we could only follow the visible trail in front of us. We continued the path upwards Stob Diamh in silence, and although it is not a difficult walk up this mountain one is likely to be reminded that this is the second Munro of the day, and I had a feeling that my boots was slightly heavier this time around.

Am I on the right or wrong path? Am I lost or not? Can I turn around? These questions need facts and not speculations to be relevant on a mountain, and when the fog is dense and facts are sparse, you do best in leaving those thoughts behind. Nevertheless, I felt a certain kind of relief, seeing the silhouette of a tall man, with a grand walking stick, standing almost completely embedded in fog next to the stone pile on top of Stob Diamh. I guess I had a hunch that there might be some facts to be gained after all.

After inspecting each other quietly, it was clear that this man was prepared for the day, with waterproof cloths covering every limb down to the robust walking boots, and also by the calmness he possessed. It turned out he was a friendly chap with a gentle temper, and swallowing our pride we had to tell him that our map was pretty much destroyed by now, and that we could need some help with where we were.

His huge hand slowly brought up a sealed waterproof map from his backpack, and he showed us the two other peaks he had visited today, and a bit surprised about me wondering he confirmed that this was indeed Stob Diamh. He then showed us how he planned to get back down to Coire Chreachainn, and we told him we were going back to the power station following another route.

We left our new friend on the top and headed of on a visible trail, it was an easy descends in the fog on grassy plains, and we continued with a decent pace, and newly found confident. We eventually descended from the clouds to find ourselves in a green valley with sheep along its sides. To our surprise we could not see the reservoir; instead we could see the north shores of Loch Awe and as we descended further the Castle of Kilchurn.
Basically we had wandered off in the wrong direction at the top, and now entered into a different valley, ironically we had taken the same path that we were shown by our friend on the top. Luckily in this valley of Coire Chreachainn there is a road going back to Lochawe that we could follow.

As we walked along the road, passing by highland cattle, we took a last glimpse back at the mountain, and my friend pointed towards one of the hillsides, and not far behind us we could see the tall man with waterproof gear and a big stick slowly but assure descending the slope, and it struck me that this man all along had resemble a friendly giant and I smiled. 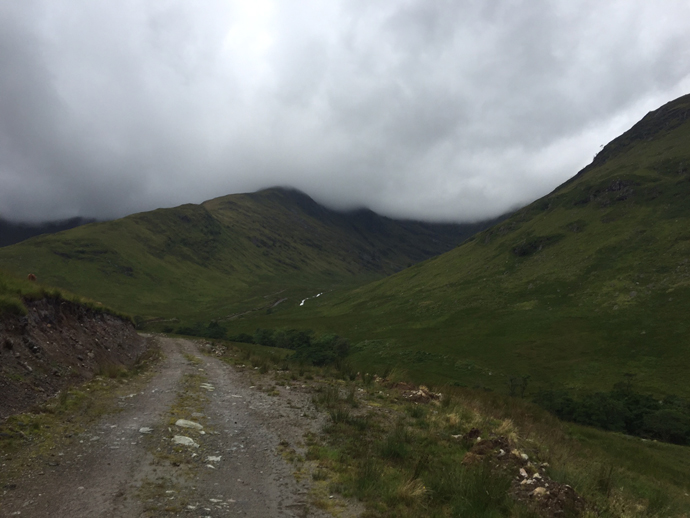 We didn’t make the whole route that day, but we made our way in difficult conditions. We didn’t see any views from the tops, but in the fog we saw more of ourselves.

That's how you learn, from experience. At least you didn't end up miles and miles from your starting point and you still safely got round both munros. They are super hills, you'll have to go back on a good day, with a GPS or a compass and map in a plastic cover

Yeah, you live and you learn

It would be nice to get back there when it is sunny too!

Awesome up there on a clear sunny day.

I'm going to do it again in the next few weeks,before winter arrives.