After our haul of 3 Munros the previous day, we had retired to the Cluanie Inn around 6pm for a quick pint. The rain had come on shortly after beginning our descent off the third Munro summit, and had stayed on, looking set to stay on for the night, all the way through the quagmire that was the path back down. As we sat in the Cluanie Inn with our drinks, watching the rain bouncing off the road outside, Robin made some excuse about having some sort of pasta-based dinner that would require quite a bit of complicated preparation. Obviously, the conditions were not well suited to alfresco cuisine, and the distinct nip of midges in the air didn't help either. I had a beef tagine that simply needed heated through, but he decided he was having a Cluanie Inn burger and chips. Well, I'd be damned if I was going to sit there with my beer and watch him wolfing that down, so I ordered a chicken and bacon salad - something fairly light with an eye still on the beef tagine for later.

After that we headed back along to the dam, with the rain now down to a fine drizzle and the midges having a party and got the tents up as quickly as possible, although Robin was putting up a new tent for the first time, so it needed a fair bit of experimentation. Just as well he had a midge net to put on! We sat in his car with the blowers on full blast and drank our beers while swiping away at the odd rogue midge still zooming about the interior, until we were ready to call it a night.

I slept extremely well and despite the beers, managed to get through the night without having to go outside and brave the midge cloud to answer a call of nature. When I did eventually venture out around 7.30, both tents were almost black with a covering of the little buggers. There was a big flat concreted area about 40 yards or so from the tents where they didn't seem quite so vicious, so I set up the stove there for a breakfast of coffee and beef tagine, before we unceremoniously dismantled the tents, horsed all our gear into the back of the car and legged it out of there at high speed.

We headed back along to the pub for a coffee and to use their facilities (no way I was dropping my drawers in the trees by the dam with all those midges on the rampage!

) before heading the short distance back east to park up in the large lay-by area. Am Bathach from the A87

We still weren't entirely sure what the whole plan was, but we had decided to head in over the Corbett Am Bathach to the wide Bealach a' Choinich before deciding on our next objective.

As we climbed the broad grassy shoulder of Am Bathach in muggy conditions with the rain and the clag lurking in the wings, we could clearly see another walker heading up the track of An Caorann Mor below us to the east, obviously by-passing the Corbett en route to one of the neighbouring Munros. 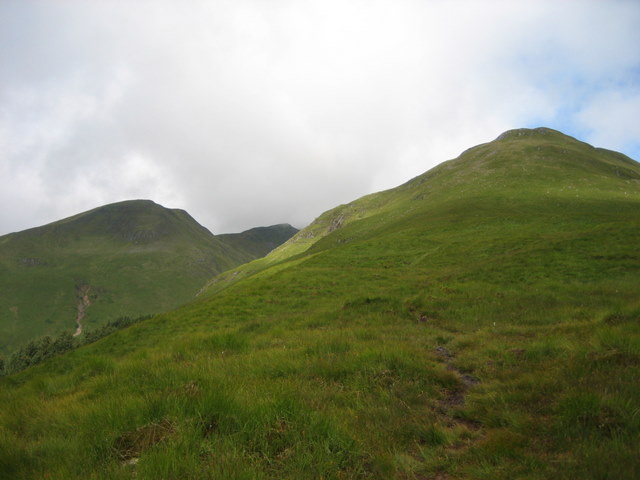 The views opening up around us were absolutely fantastic, just getting better and better, and the true nature of Am Bathach as a long isolated ridge became clear as we reached and passed the 734 metre southern top. 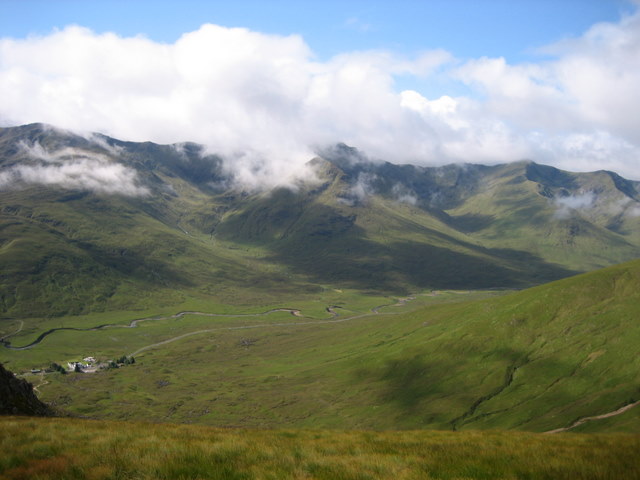 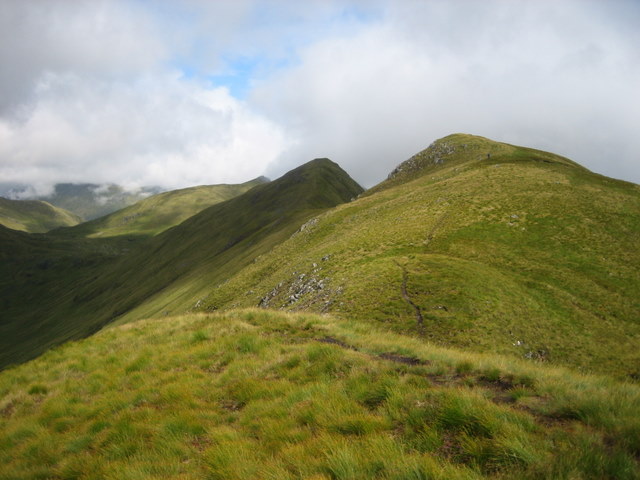 Along Am Bathach's undulating ridge 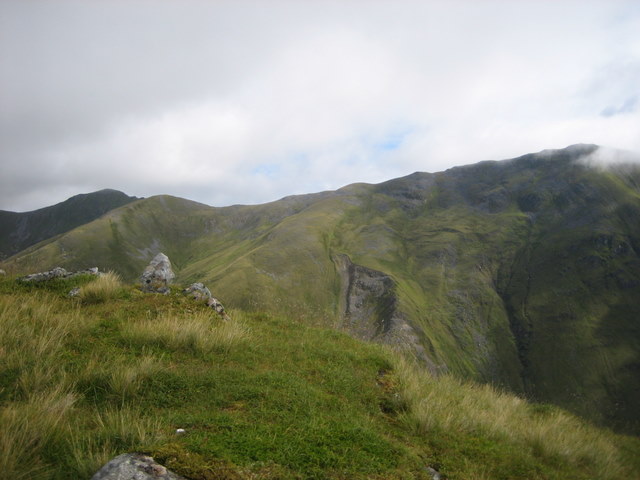 South back along the ridge from just before the summit

The small summit cairn offers a fantastic viewpoint for Ciste Dubh across the broad bealach. 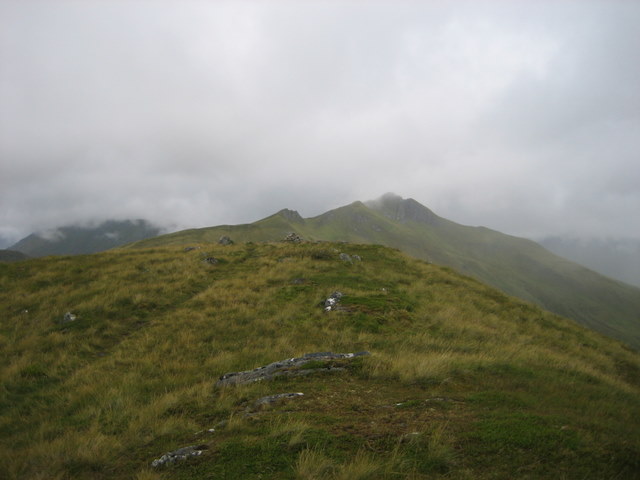 Me at the tiny summit cairn

We descend down towards the little lochan. We now had a decision to make - where to head to next. Ciste Dubh was an obvious option. However, Robin's knees were complaining bitterly on descent, and he didn't fancy the look of the potential descent of this one. He had done Saileag before, the most westerly of the three Munros on the so-called Brothers Ridge, but not the other two. He reckoned he could manage these two, and possibly even on to Saileag before descending down through the Bealach an Lapain before the long trek back along the road. 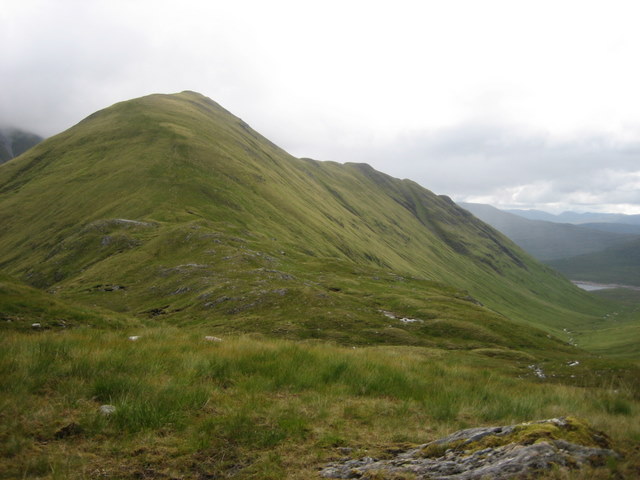 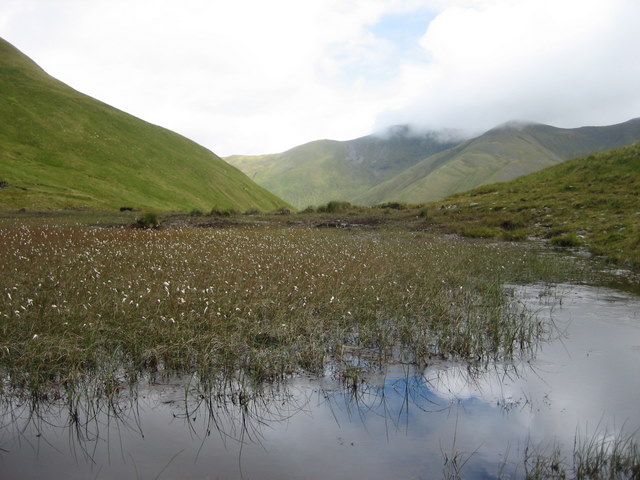 Bog cotton on the lochan

So we headed up the wet grassy slopes towards the Top of Sgurr an Fhuarail, with the clag seeming to descend towards us with every step. The views along the flanks of Am Bathach towards Loch Cluanie are brilliant, but as we climb higher, the real insignificance of Am Bathach amongst the surrounding peaks becomes more and more noticeable. Ciste Dubh from the lower slopes of Sgurr an Fhuarail 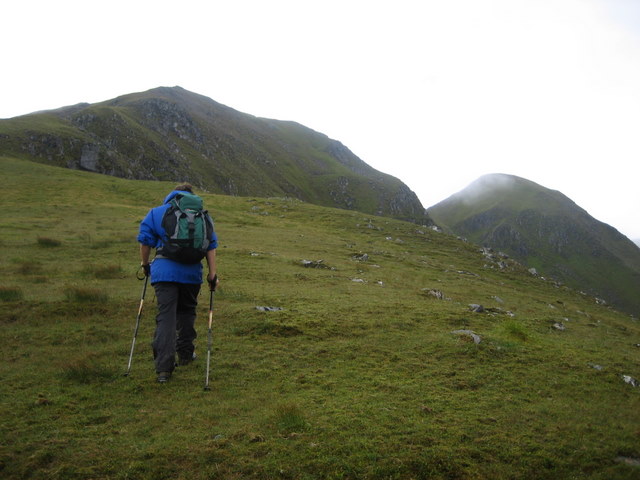 By the time we reach the 987 metre Top, the views have vanished into the clag which pretty much clings to us all the way along the undulating ridge over Aonach Mheadhoin and on to the remarkabkly precariously perched cairn of Sgurr a Bhealaich Dheirg. 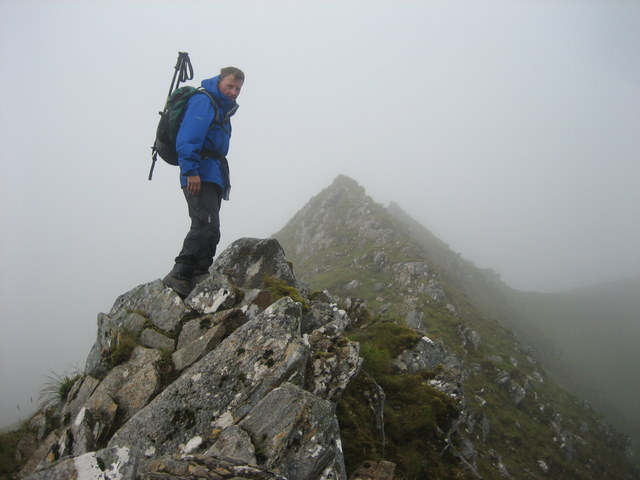 The ridge narrows to a fine arete before turning north.... ..... and then dipping and climbing again up to the col just short of Sgurr a' Bhealaich Dheirg

We drop our packs and poles at the little col about a hundred metres or so from the summit and pick our way gingerly along the wet, slippery, rocky ridge. There might not be any grand views, but the clag certainly helps to make this a very atmospheric and eery setting. We carefully manoeuver ourselves into position for some summit shots before retreating back to the col to collect our stuff and have a quick bite to eat. 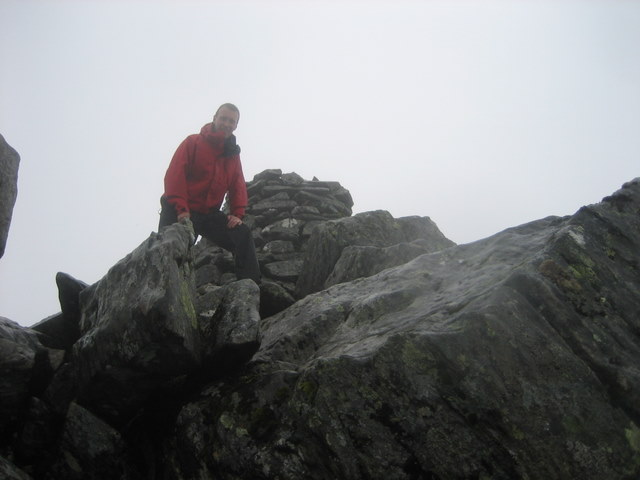 Me at the very rocky summit One final shot looking back before heading out

Time has now marched on and looking at the map, we sadly conclude that Saileag is going to be a step too far, leaving us with a 2 hour march back along the road. It might have been different if we'd had the views, but it doesn't seem worth it for another clag-bound summit scene.

We return about 600 metres south east back along the ridge before taking a bearing over the 806 spot height and down towards the gap in the trees. As we descend the wet, boggy slopes, the road and the glen below come into view through the wisps of mist, with views to the slopes of the South Glen Shiel Ridge on the other side of the glen. Dodgy descent back down into the glen

Our navigation was spot on, but we are led astray by the changed topography in the forestry below, and end up having to clamber over a high fence at the top of the NTS property, before negotiating an awkward area of felled trees before emerging out onto the old military road.

That left us with an hour long march back along the road which turned out to be the scariest part of the day, not least the insane overtaking manoeuver by a couple of idiots on a long straight (we were following correct procedure and walking on the right hand verge towards oncoming traffic) who could quite clearly see us but yet who continued to overtake at high speed. As the first idiot went past at what I would estimate as at least 70mph, missing Robin in front of me by no more than a few centimetres, he turned round in shock to see a second high speed as*^"le skimming me by a similar margin. By the time we arrived back at the car, I certainly had a bit of a crick in my neck what with all the craning round I did every time I heard a traffic noise over my left shoulder.

Then it was into the car as the midges began to bite again and down the road with a pit-stop at the Invergarry Hotel to toast an excellent two days in the magical wilderness of Kintail.

Beef tagine and coffee for breakfast - now that is eclectic.
A nice two-day haul there, Graeme.

kevsbald wrote:Beef tagine and coffee for breakfast - now that is eclectic.
A nice two-day haul there, Graeme.

Back to more standard fare this weekend though boyo! Got the rolls and sausages in already and rarin' to go. Just hope the rain relents by tomorrow as forecast - it's coming down like rods out there just now!

Nice couple of reports Graeme, always a shame to end a walk with a long road return, especially one with nutters on it.
Your map will be looking more balanced out now you've got these bagged.

Nice one Graeme. Didn't know you were scouting for me and Danrun

We are not paying you mind

That's a fair bit of blue for a couple of days

Good that you went over Am Bathach, many walkers seem to head through the bog at the bottom instead but it's actually a nice hill though very overshadowed 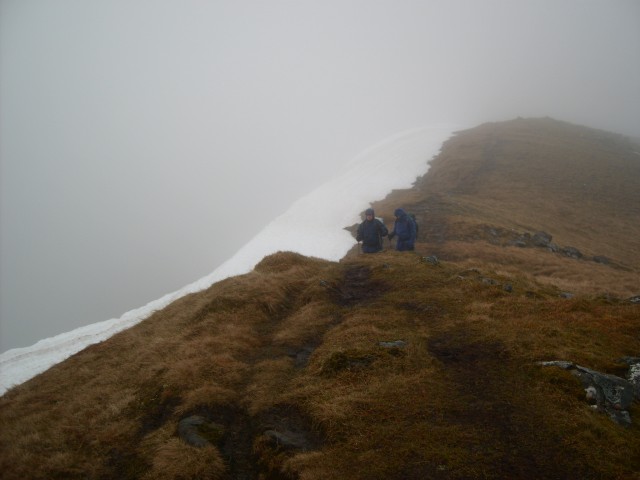