It's been a while since I posted my last walk, just busy doing different things, including some hillwalking, though weather didn't spoil us last week. But back to clearing up my growing backup, at the moment no less than 7 reports!

The following walk was a part of our south-eastern campaign, with weather rubbish up in the north, we decided to skip the WH Meet (

)and head to Pertshire to bag a few mountains down there. First, was the time to face The Dam Duo, Meall Buidhe and Stuchd an Lochain.
Kevin has done them before and in early spring, with snow on the ridge, but conditions were rather gray and his old photos didn't really show much. Judging by the number of reports, I thought the Dam Duo must be a popular route. Of course they can be climbed separately, but being so close to each other, pairing them up is an obvious choice.

After 3 hours of stomach sickening drive from Inverness, we arrived at the car park by the dam only to witness a spectacular fountain 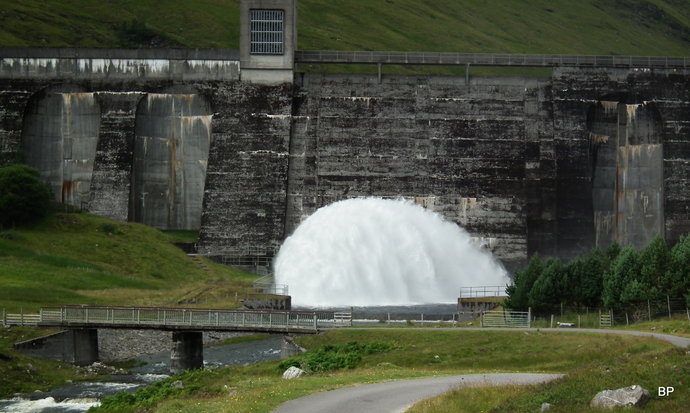 The river full to bursting: 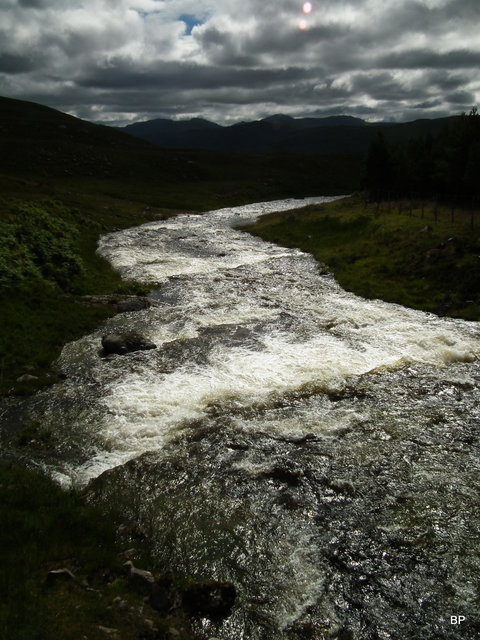 We went up Stuchd first, as it looked steeper from below. Our route was the usual approach via the well worn path. Later, we also followed the path up the second Munro:

Track_LOCH AN DAIMH MUNROS 29-07-16.gpx Open full screen  NB: Walkhighlands is not responsible for the accuracy of gpx files in users posts
The path is easy to begin with... 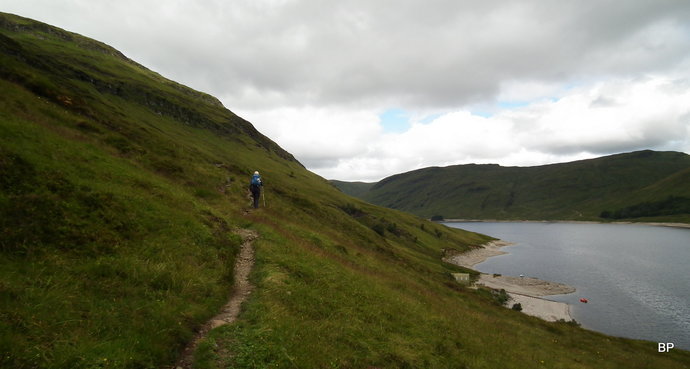 ...but soon it steepens and becomes very tumbly: 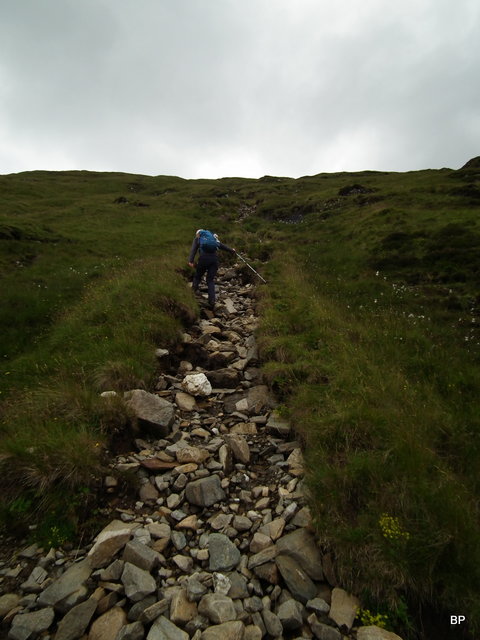 The dam and Meall Buidhe from the upper slopes of Stuchd:

About 2/3 way up we met two other walkers coming down, fellow WalkHighhlanders Karen and AJ

We chatted for a few minutes, it was nice to have met you folks

After about 350m of stiff ascent, the angle eased off and the ridge became easier, I was running up now, eager to get to the first top and see wider views. It was our first holiday trip with a good chance of full summit panos!

Plenty of high cloud about, but it stayed well above mountain tops. To the east, Lawers ridge:

On the first top (888m) we stopped for our first photo session, panoramic pictures etc. I was impressed by the extent of the views and the best was yet to come:

The summit of Stuchd an Lochain, Loch an Daimh and the Glen Coe mountains on the horizon: 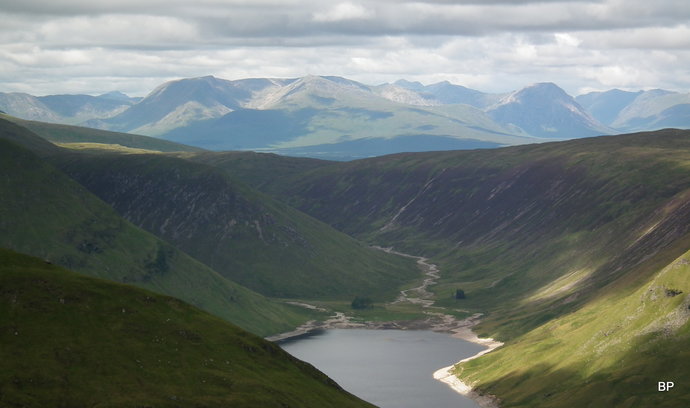 A familiar shape... The Big Shepherd! (photo enhanced to remove the haze):

The final climb is again steeper, but doesn't last long:

On the summit (or somewhere near it anyway) of my 193th Munro! Tick-tock, tick-tock... 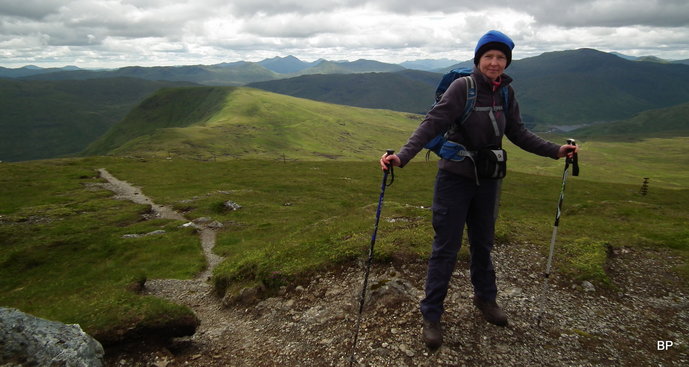 He's not as happy as me... Because I'm catching up! The gap between us is down to less than 10 now! 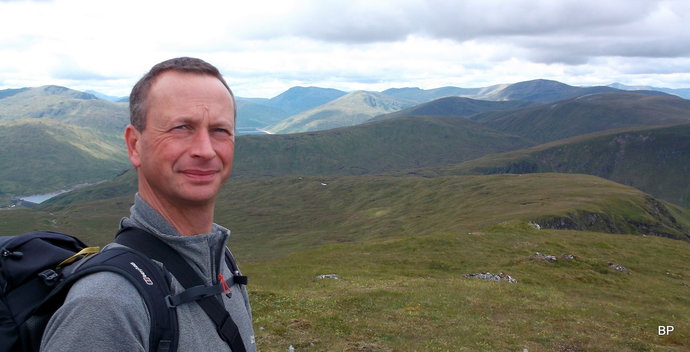 We spent far too much time on the summit of Stuchd, but to our excuse, weather was very good, the best we've had so far this July, and I was desperate to enjoy my hills for a change, rather than just trudge up with my tongue stuck out and my mojo lost on the way

Taking advantage of the sunny day:

We took far too many photos and since I can't add them all here, I chose a few best ones, especially panoramic snaps.
Pano 1. West to North, with Loch an Daimh in the center, Meall Buidhe to the right:

Pano 2. View south, so many mountains still to climb here! So far, we only added Meall Ghaordaidh and its sidekick Corbett to our tally.

Pano 3. South and east with Lawers group and Tarmachan Ridge in the middle:

The wild, wild western view, with Kevin in the foreground

We returned to the dam, retracing our steps down the tumbly path, took a short break in the car (luckily, no midges!) and then set off to climb the second Munro. This one also has a well-worn path, or should I say, a few parallel paths up the slope, but it's much boggier than it's higher neighbour.
Up the wet slopes of Meall Buidhe: 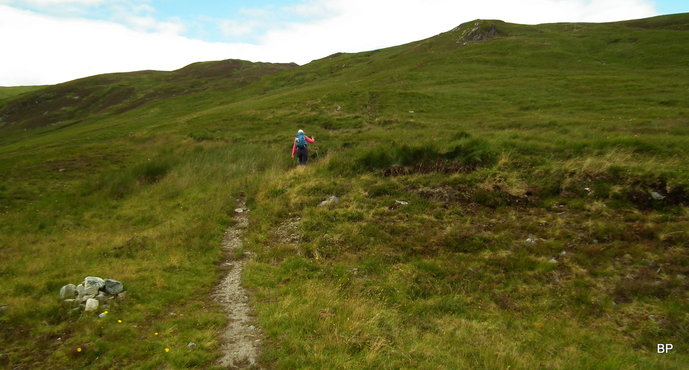 Superb views down to Loch an Daimh:

The wind has picked up but it was till a good day, good enough to make Panther smile a lot! I think we deserved a bit of joy, after a whole week of cloud, rain and misery!

The steeper section lasts for maybe 200m of ascent and then the angle eases off and the ground turns boggier. Views are spectacular, though (would be even better on a wintry day) and well worth the boggy trudge:

We reached the summit fairy quickly and again, faffed about for a long time, enjoying the short glimpse of good weather.
Lucy bagged her 25th Munro! I suspect she's becoming the fastest lamb in the Highlands! 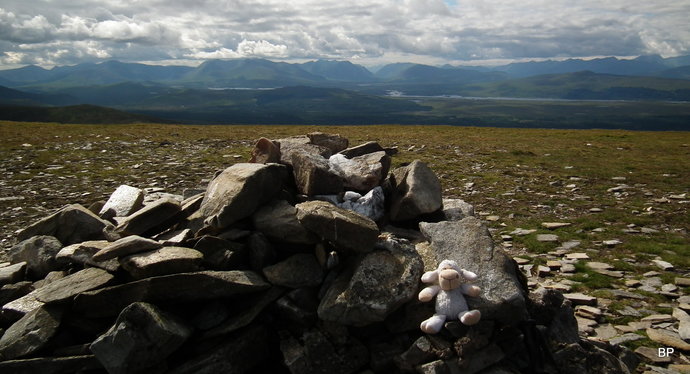 And for Kevin it was another repeat, so he's even more grumpy! Eventually, we packed up and began the descent back to the dam. We took a different path this time and this one was much drier (following a wee stream). The dam view was great: 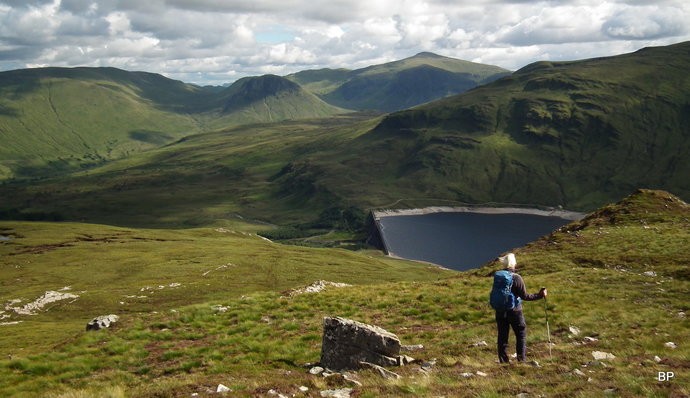 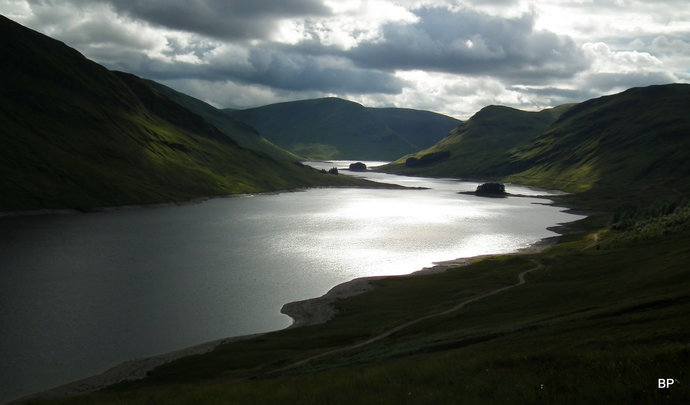 Summing up, the Dam Duo can be recommended to anybody, even hillwalking beginners. Apart from some bog here and there, no real obstacles to reach the summits. And well worth saving for a clear day, views from both peaks are amazing.
...........
Continuing our SE campaign, our next trip involved another duo, this time a duo of Corbetts. Maybe not the most spectacular view-wise, but offering a lesson in geology. TR to come soon.

Hi BP - think you did these two in the correct order, I did them the other way round on a really hot day and found the climb up from the loch really hard going once the path turned and headed straight up the hill with not a zig zag in sight.

Gordie12 wrote:Hi BP - think you did these two in the correct order, I did them the other way round on a really hot day and found the climb up from the loch really hard going once the path turned and headed straight up the hill with not a zig zag in sight.

We found that tumbling path a real trudge, too. Getting to the first top was a relief, the rest was just a pleasant stroll!

As for the Corbetts, not the two you mentioned, another pair but also in the area. Will post my TR later today