I discovered by accident that there was to be a South Glen Shiel ridge expedition, and the kind people involved were too polite to say no when I invited myself along... ^^ However, as the day approached and the forecast deteriorated, people began to drop out.

A crew of three; Jonathan, Gill and Andy, gathered at the Shiel Bridge campsite on Saturday night, but unfortunately I would have to drive up the following morning due to work commitments.

The weather was not good, but Jonathan had absolute faith in the BBC weather man who promised a day of sunshine following a wet start.

It was a VERY wet start for me; leaving Glasgow at 5.30, it seemed as though all the rain in existence was falling from the sky. But there was more to come! Meeting the others and leaving my car at the end point, we set off for the Cluanie Inn where we donned waterproofs and set off cheerfully, as the weather was definitely going to improve!

The track was easy going to start with, and it even stopped raining long enough for us to remove waterproofs. Obviously five minutes later it started chucking it down again and we had to stop to put them back on. And on they stayed. 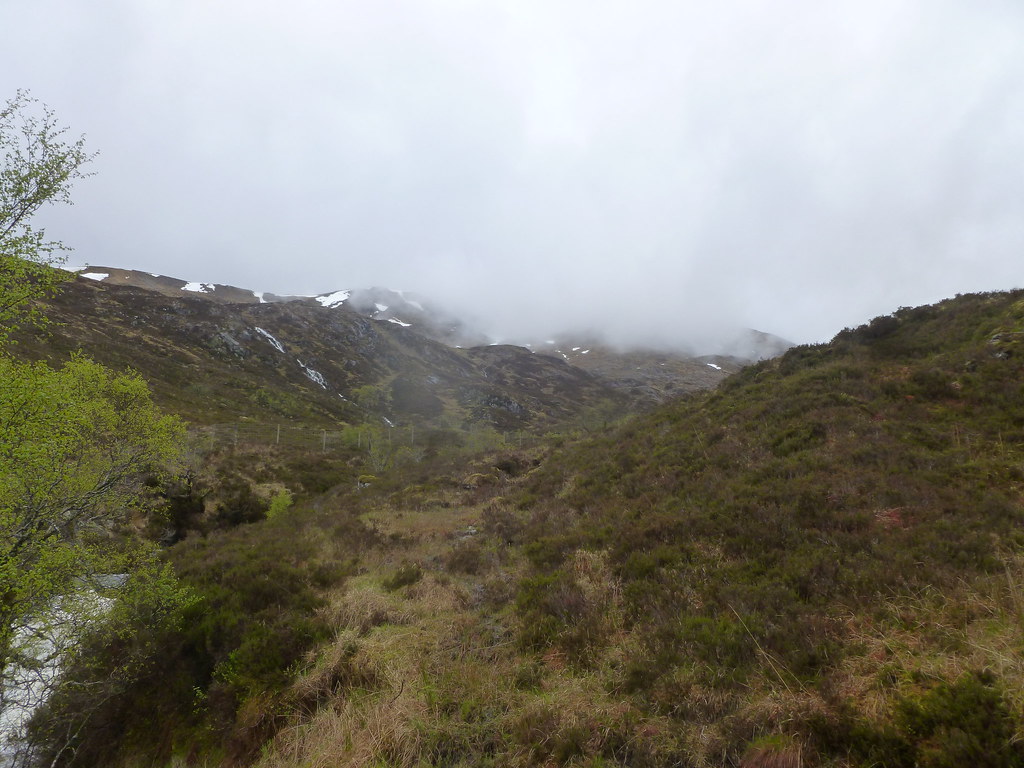 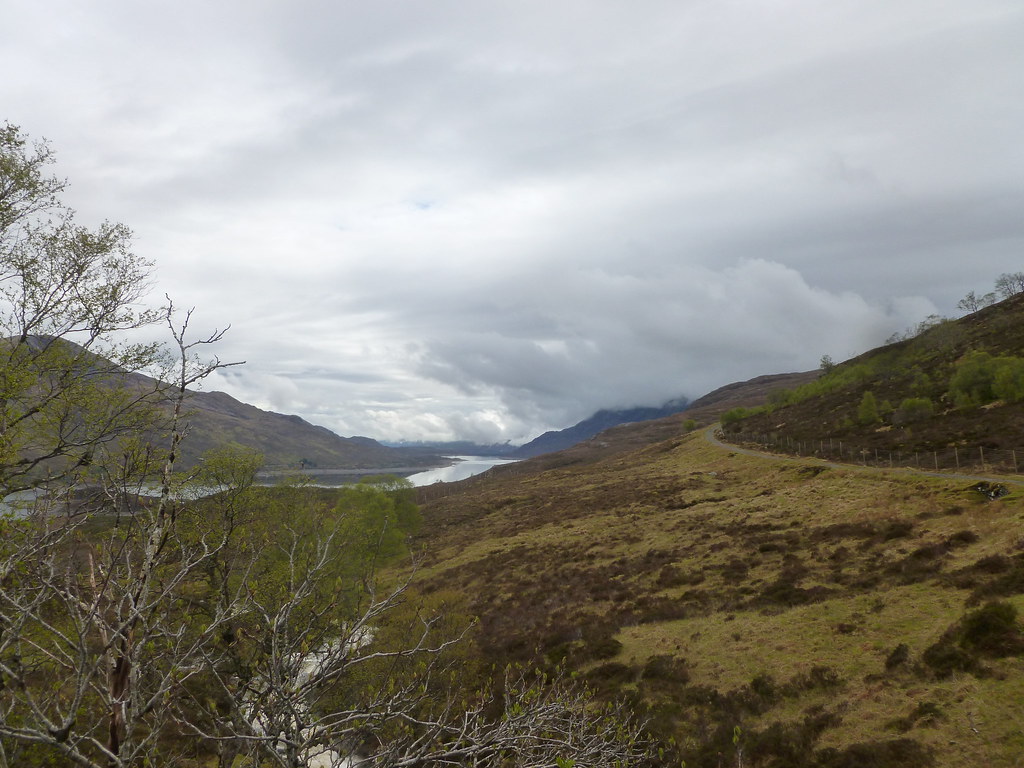 The rain got heavier and heavier. We eventually left the track and what we were walking up was more akin to a waterfall than a path. 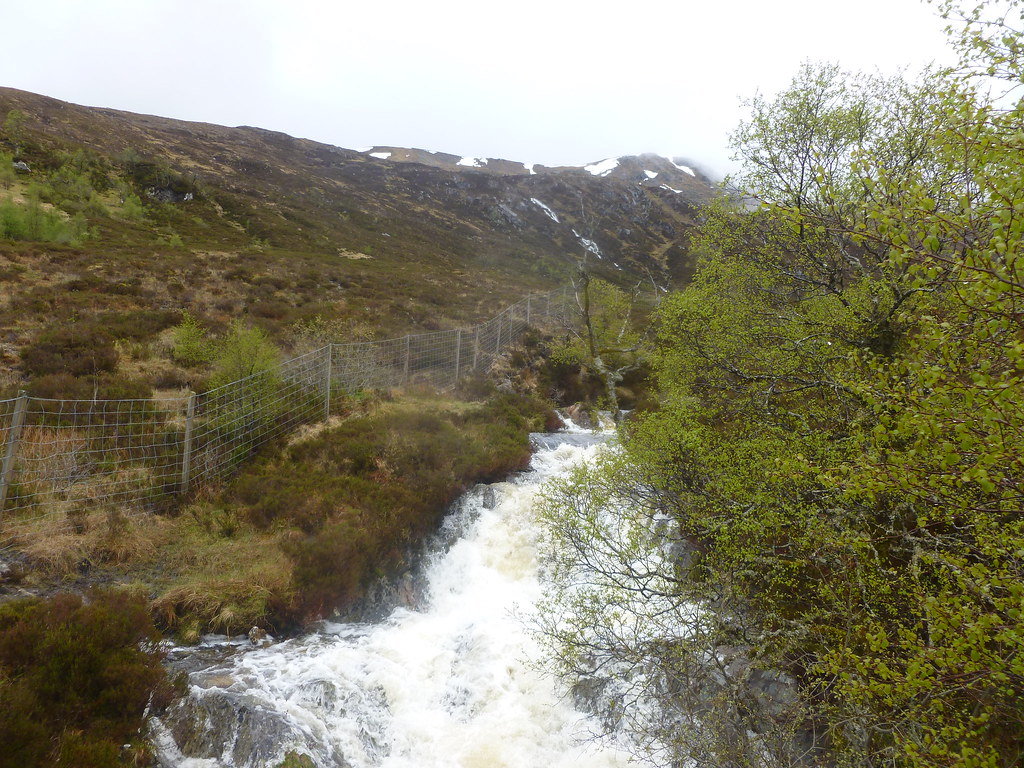 A rare break in the cloud, but not the rain 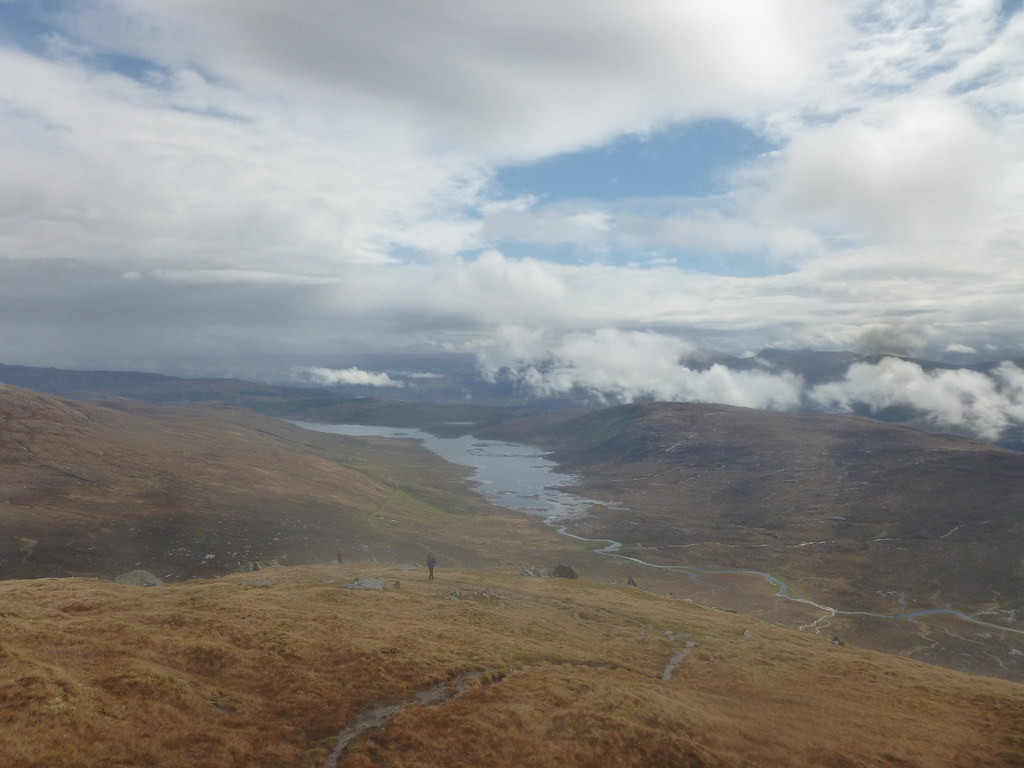 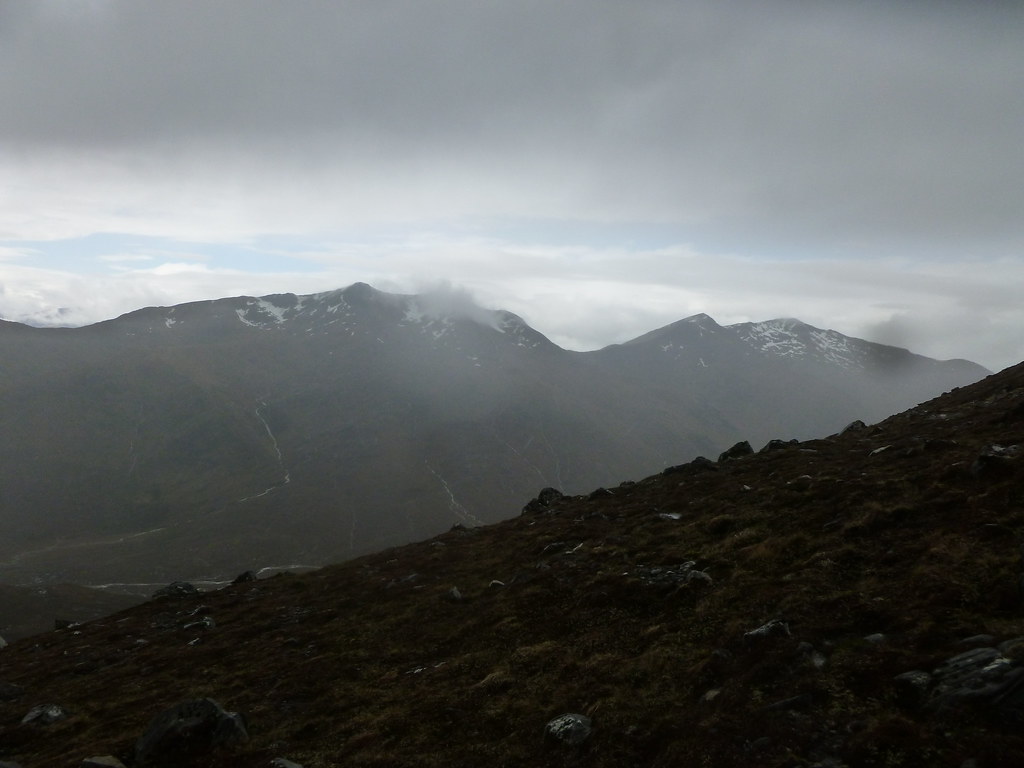 We plodded on and reached the summit of number one, Creag a'Mhaim, which was fairly anti-climactic. Relieved to be on the ridge, despite the lack of views, we carried on down a very short descent and a slightly longer pull up to the second peak, Druim Shionnach. This was my centenary which I had forgotten until Andy stopped and insisted I went first! I'm not fussed about numbers, but it was a nice moment to spend in lovely company 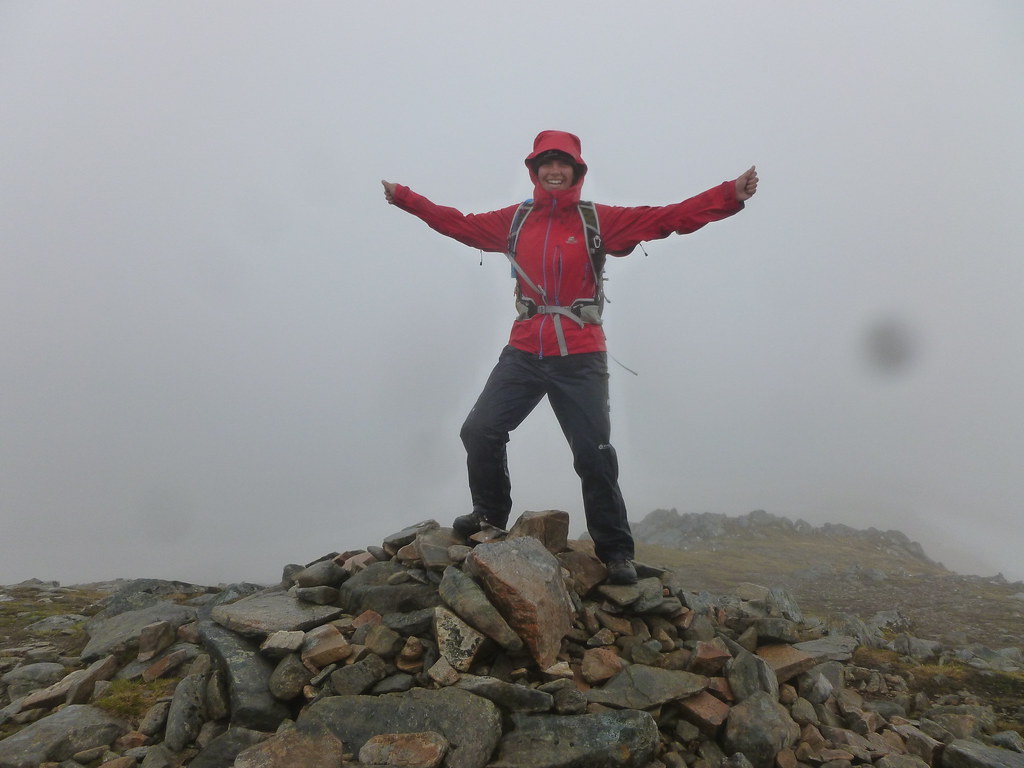 Views still non-existent, we continued. It was a longer distance but easy walk to the next summit, the highest on the ridge; Aonach Air Chrith. Again, no views so on we went.

Here it got excitingly narrow and although we couldn't see the drop, we could feel it. Eventually we reached Maol Chinn-Dearg. This was where the ridge splits and it's possible to descend. But we were in it for the long haul. Jonathan and I had the maps out, took a bearing and agreed the correct direction.

As we approached number five, Sgurr an Doire Leathain, the cloud briefly lifted and we were afford a view of Loch Quoich! 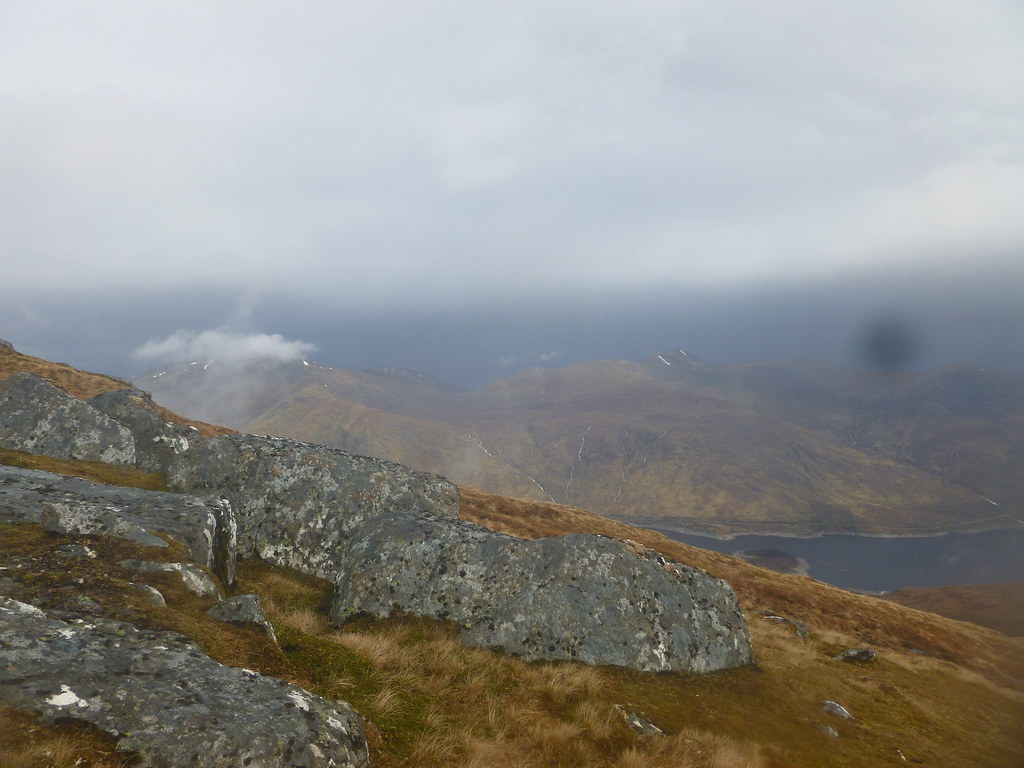 Looking back from number 5 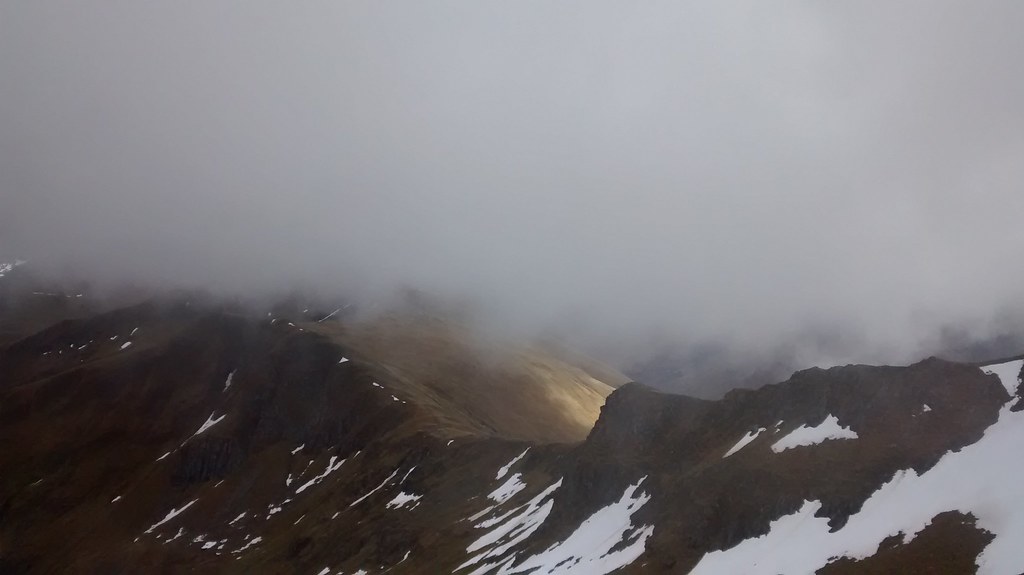 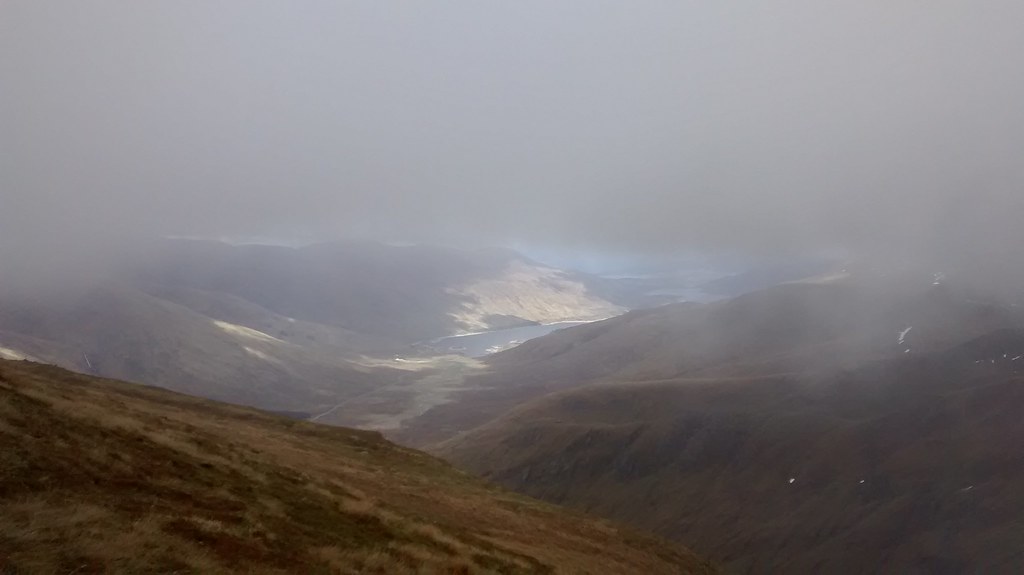 Onwards swiftly to number six, Sgurr an Lochain, where we met a group of people celebrating. However, when we realised what they were celebrating we had to poop their party as they thought they were at the end of the ridge. We were not popular when we told them they still had one to go!

The look of relief on everyone's faces on seeing the bypass path around Sgurr Beag was almost comical, and we zipped around it before taking off to the last summit, Creag nan Damh. Andy and I waited for the others before we all decided to celebrate by getting down as fast as possible! 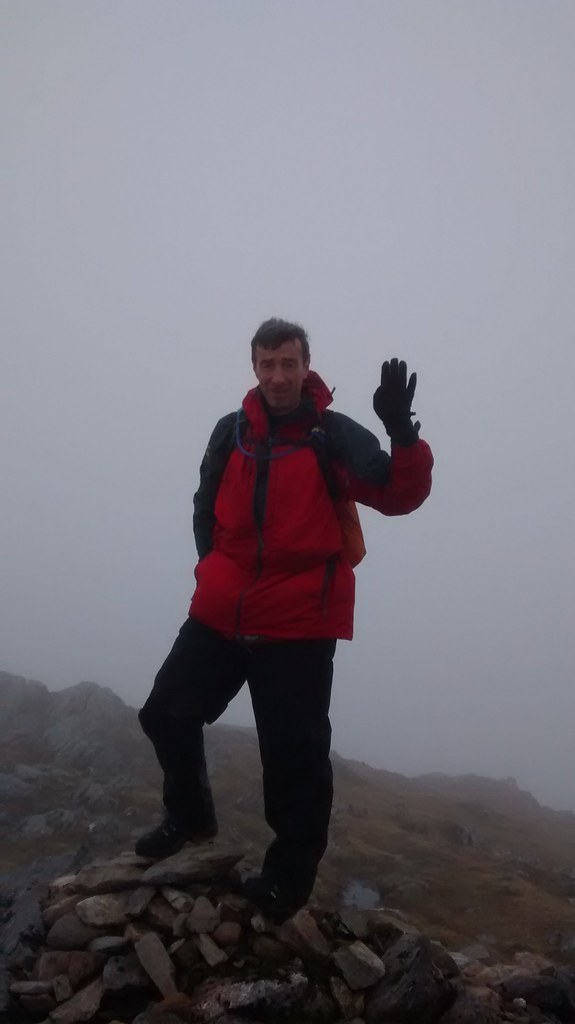 Continuing along the ridge, we scrambled up a rocky thing (the gully full of snow did not look appealing) before eventually coming to the descent point. A path led us down, across a river (crossed with the aid of my bin bags being thrown back across for everyone) and eventually most of the way to the car, when we were faced with another torrent of water....

It had actually stopped raining and the waterproofs were off. However, the river was not looking promising. Andy and I plotted the best route across. I donned by bin bags and somehow made it across unscathed. The others were not so lucky...Gill made it across with only wet feet, Andy slipped and got a wet leg and Jonathan went for the waist-deep wade. It was the end of the day and we were all tired, so it was pretty funny for all of us!

Back at my car we drove straight to the Cluanie for dinner (mac n cheese comfort food earned!) before returning to the campsite where Scoob & Fi and Tomsie had arrived. A wonderful evening of banter was enjoyed following a very wet, but wonderful day. However, the BBC weather man could not have been more wrong!!

Few cracking photos from the drive home the following day...the view from the campsite the next morning, Jonathan's palace bottom right.. 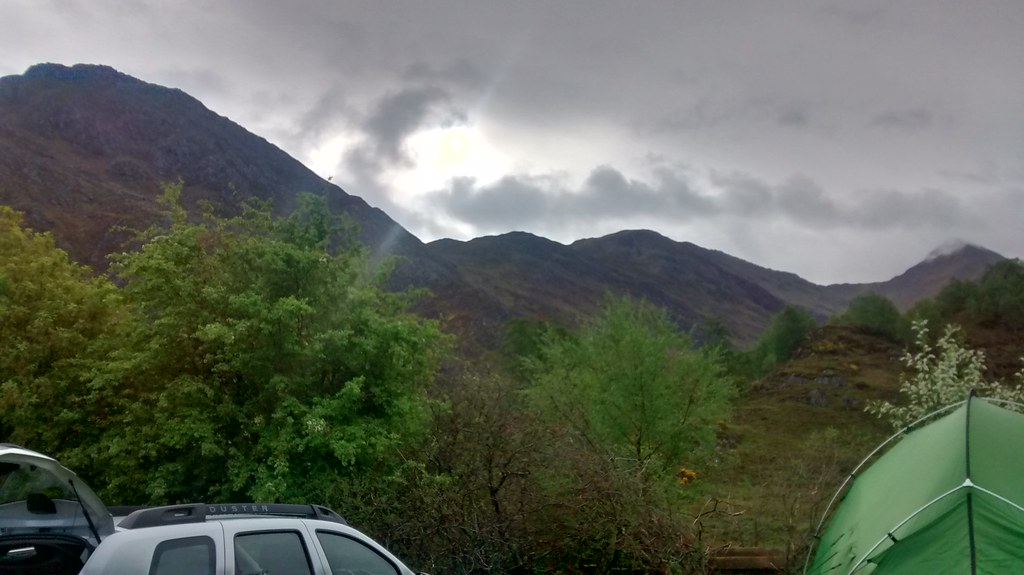 Summits one and two; Creag a'Mhaim and Druim Shionnach my 100th 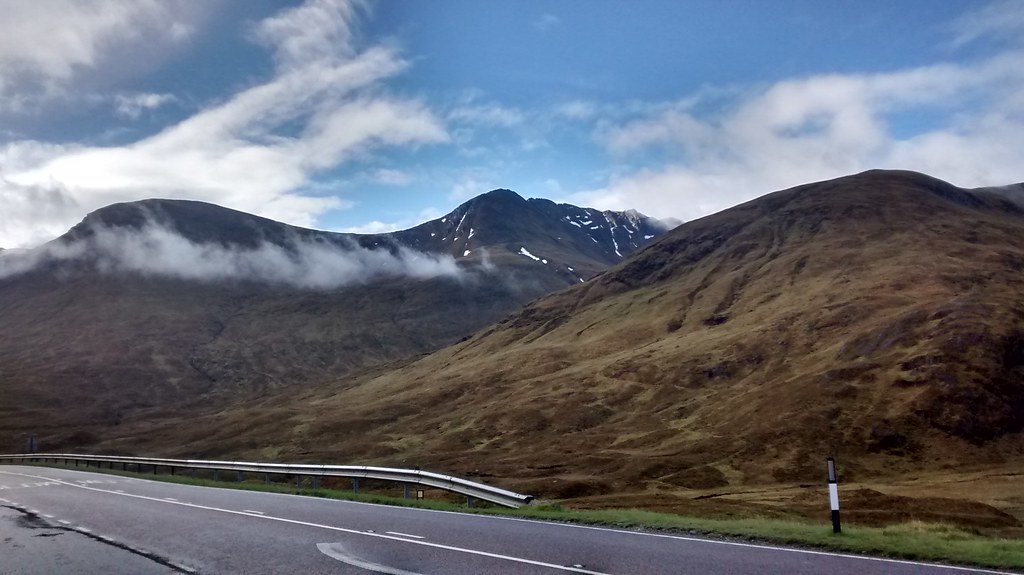 Most of the ridge 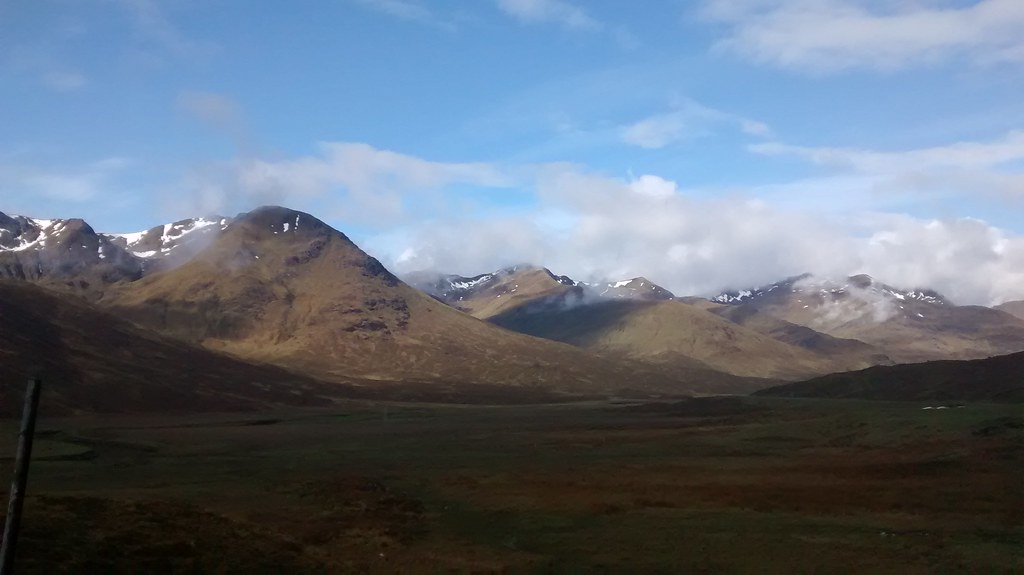 Gorgeous Loch Lomond where I stopped for a rest 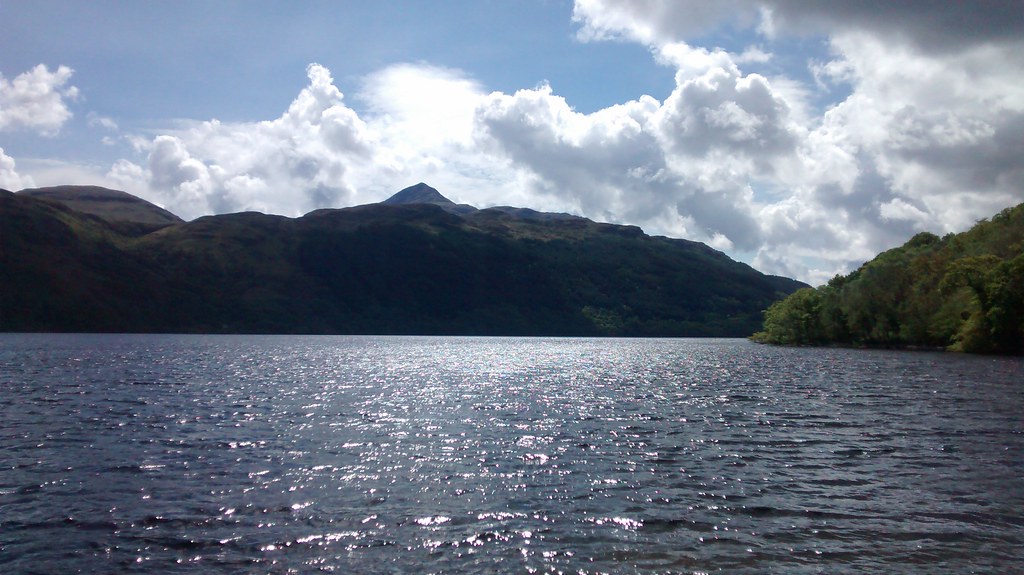