The Final Crianlarich 3 - My Boggy (yet brilliant) Advice

The Final Crianlarich 3 - My Boggy (yet brilliant) Advice


The Final Crianlarich 3 - My Boggy (yet brilliant) Advice

Munro Bagging is a hobby like no other. It's not a competition, there is no right or wrong and there is only one rule - get to the 282 tops. Well at least that is my take on it, if you have another opinion... keep it to yourself!

For this exact reason, everyone has a completely different journey and method behind the madness.

Since signing up for my first "I'm never running another marathon again" (i.e. my second one), Loch Ness in September, training meant my last Munro's were the Ben More Four on the 22nd & 23rd July. The original master plan was to complete the Crianlarich Seven but that was sidelined.

I had planned to complete all three from Inverarnan and use the West Highland Way to get (most of the way) from Inverarnan to Crinalarich. Conscious it was a Sunday and the roads of Scotland would be littered with coffin dodgers and scone hunters I knew the only way for a successful drive over 35mph was an early start...

The 03:50 alarm went off, coffee demolished and set off from Aberdeen arriving in Inverarnan just before 08:00.

Followed the West Highland Way, before taking a detour when it crosses the A82. I kept along a farm path used for a new (or new looking) hydro scheme? Hopped across a stream, and took the direct route up the west side of Sron Gharbh

You can see the rather obvious path (that definitely hasn't made it to the OS maps yet). 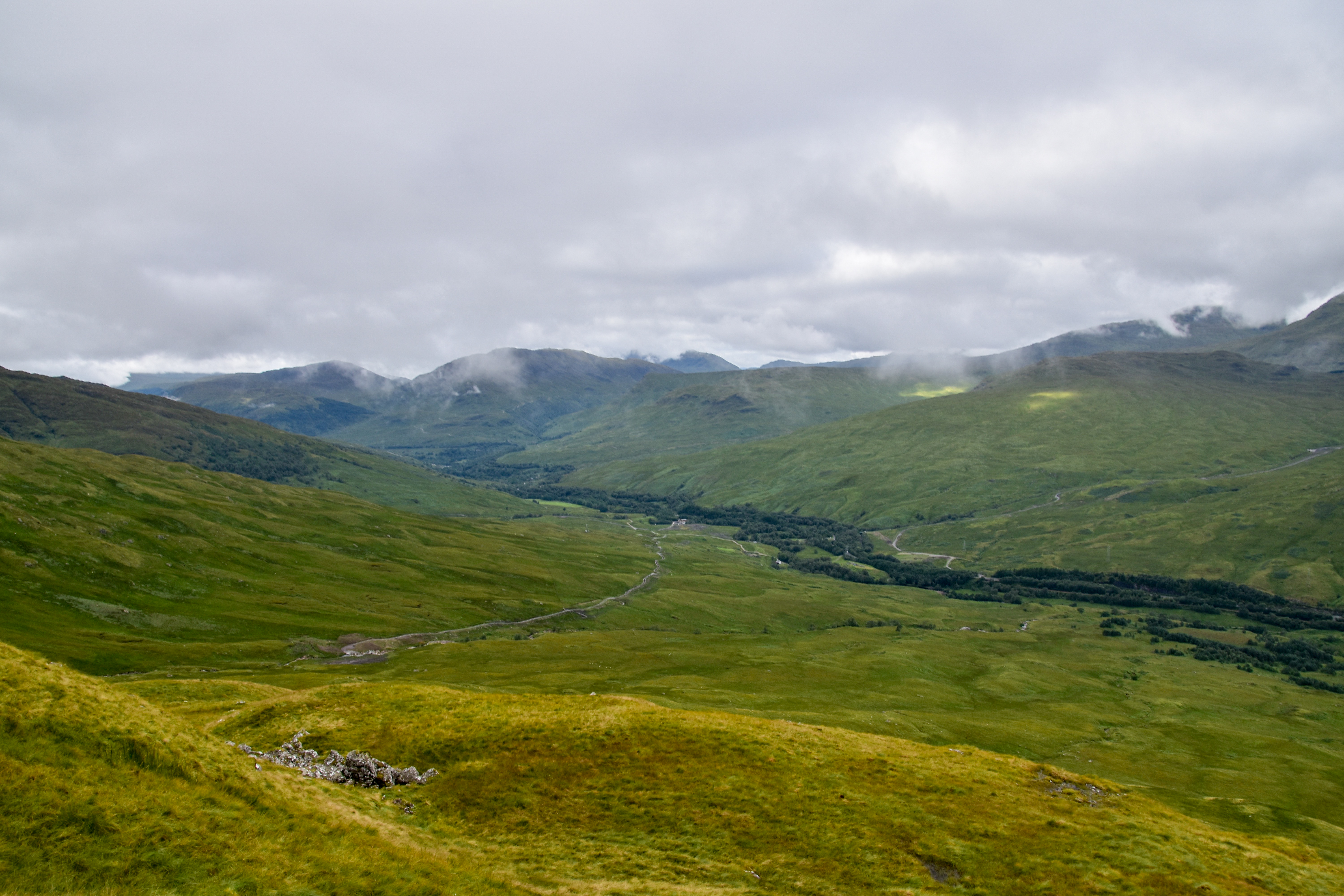 Rather steep and boggy start to the day. 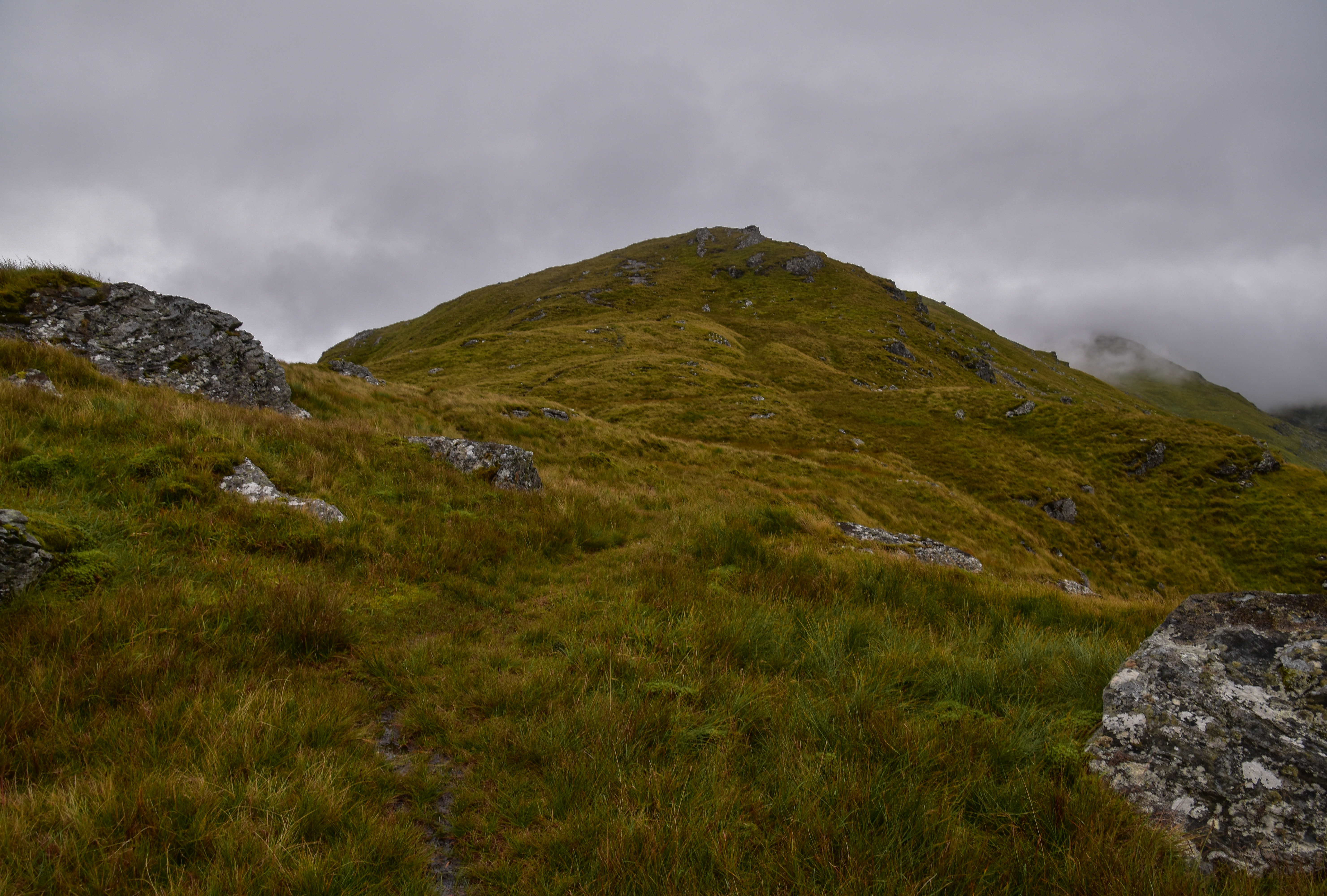 I always under estimate how much more effort is required when not following the beaten path. Following sheep trails is always my preferred option but they must have far greater balance as I have never seen a sheep fall. The sheep have seen me fall on many occasions - thankfully not on this section!

It must have been about 2 hours since leaving the car and I had final reached the path up An Caisteal - this is the view looking back toward Crianlarich. 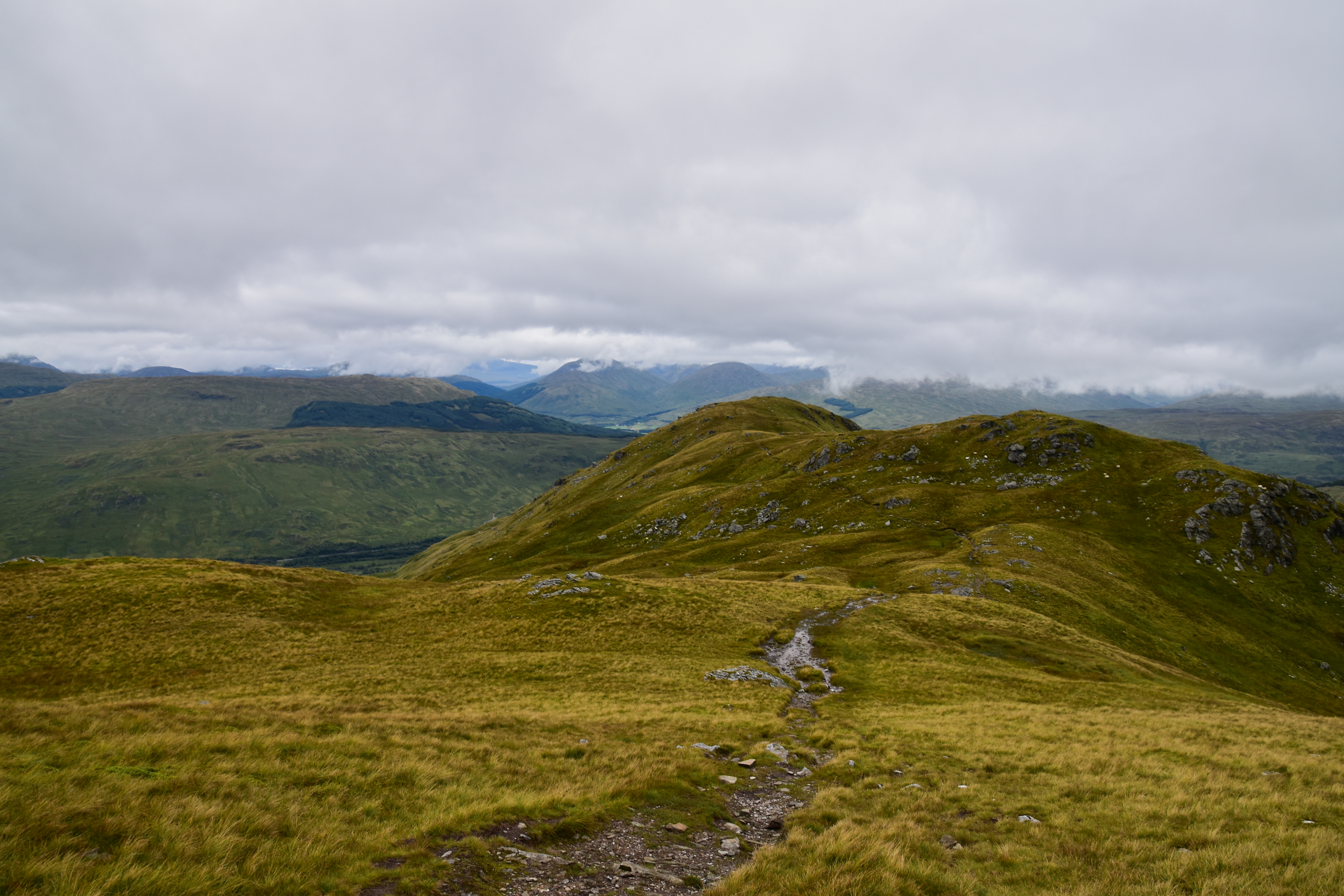 Another summit with no view 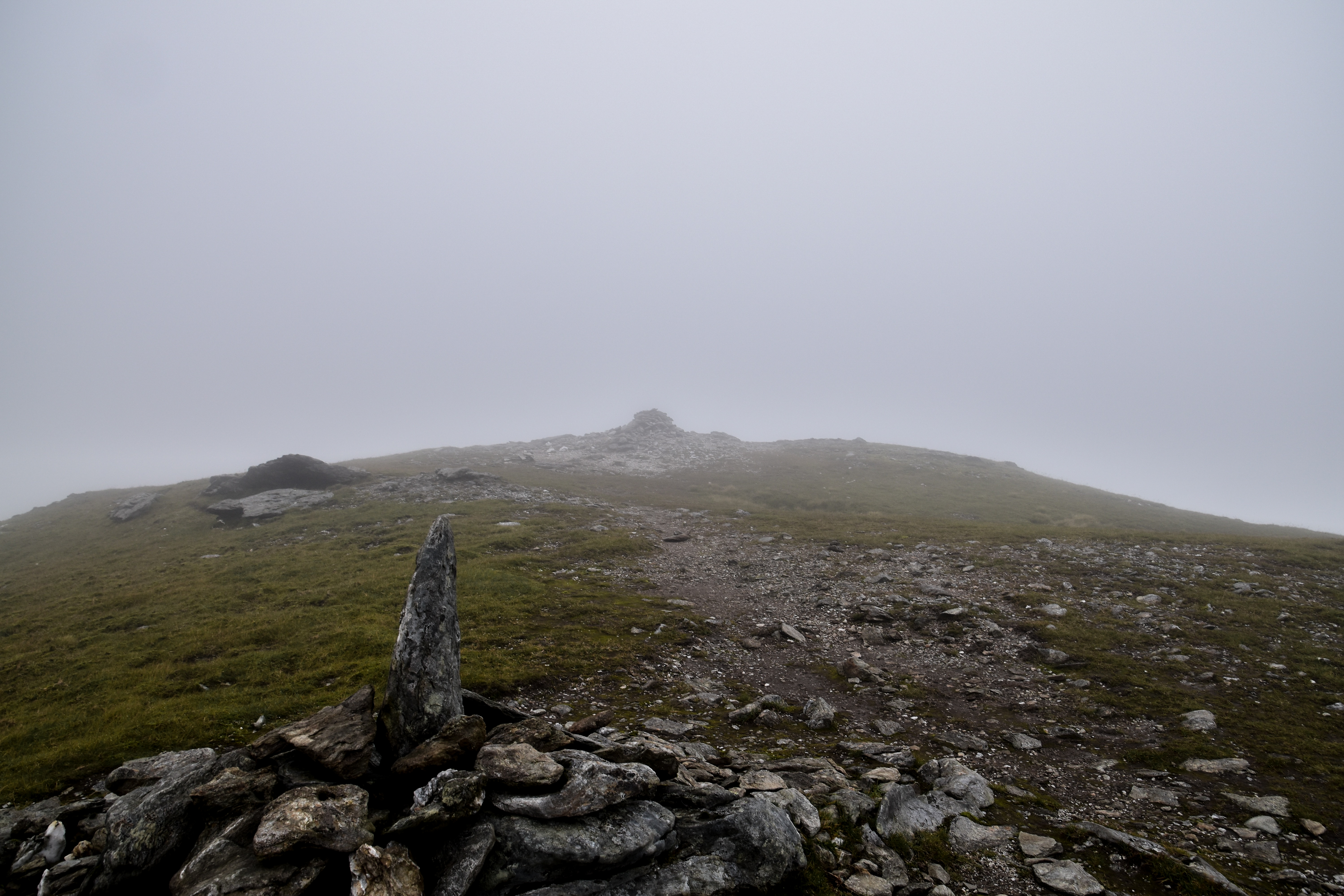 Fulling full of energy, and with the hills relatively deserted I didn't stop for more than 30 seconds and headed on route to Beinn a'Chroin.

It is quite an easy yet fun scramble down from An Caisteal and on route to Beinn a'Chroin. 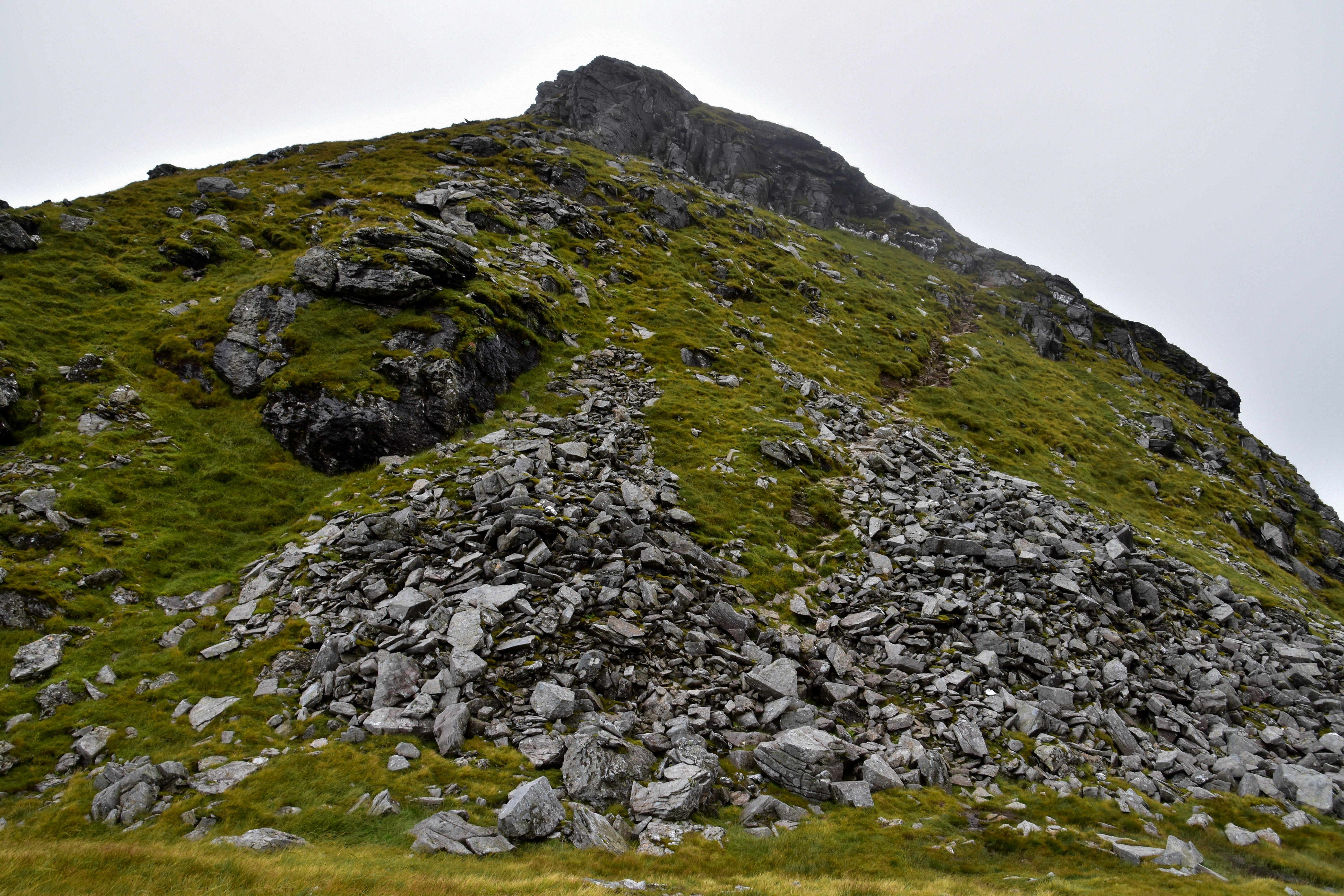 The view looking back towards the hidden An Caisteal summit from the more exciting scramble up Beinn a'Chroin. 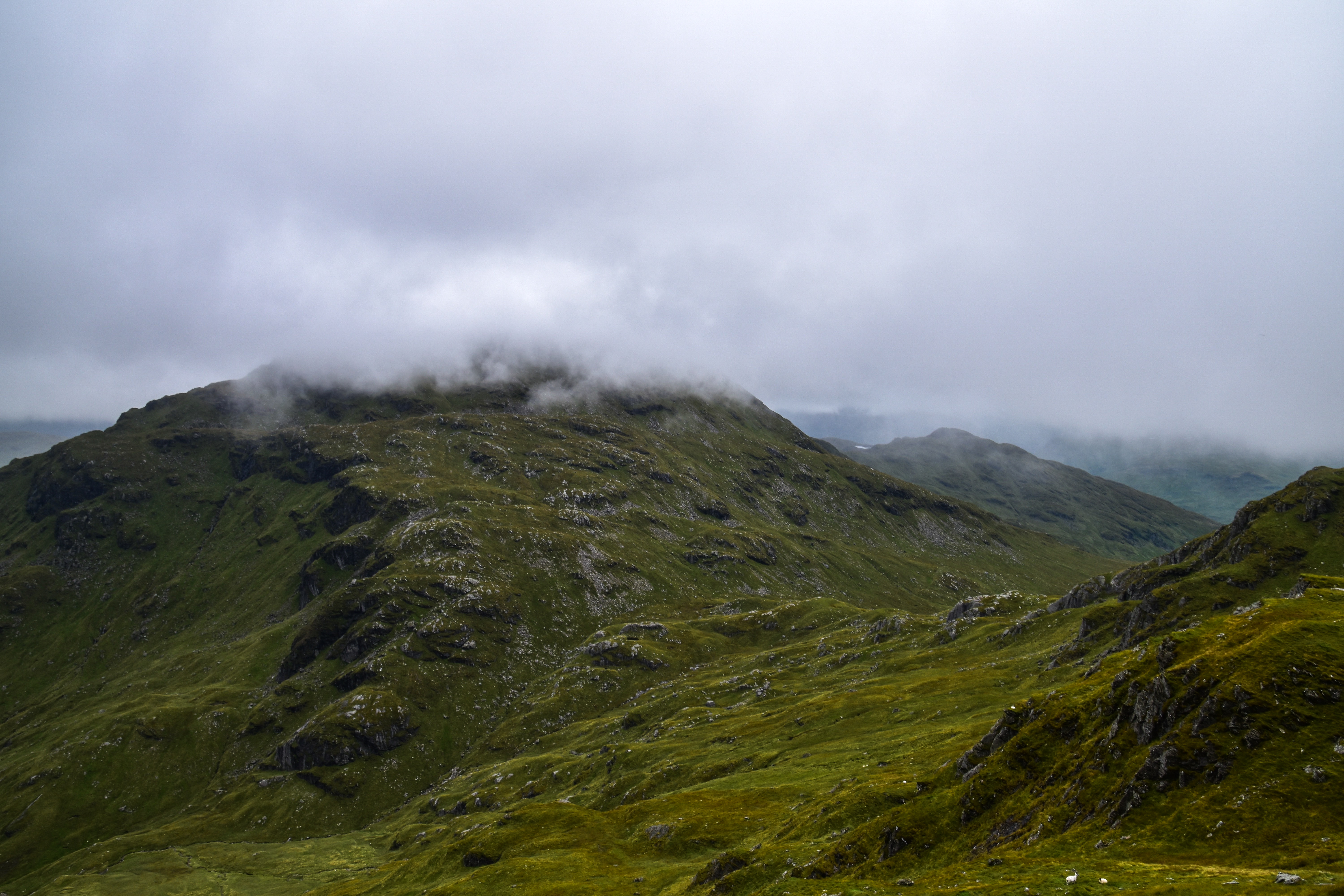 What I had read from the Walk Reports of Beinn a'Chroin is there it is covered in scandal about where the true summit lies - just to keep all you wind up merchants at bay, I went to both.

I believe this may be the true summit (the west side). Munro 41. 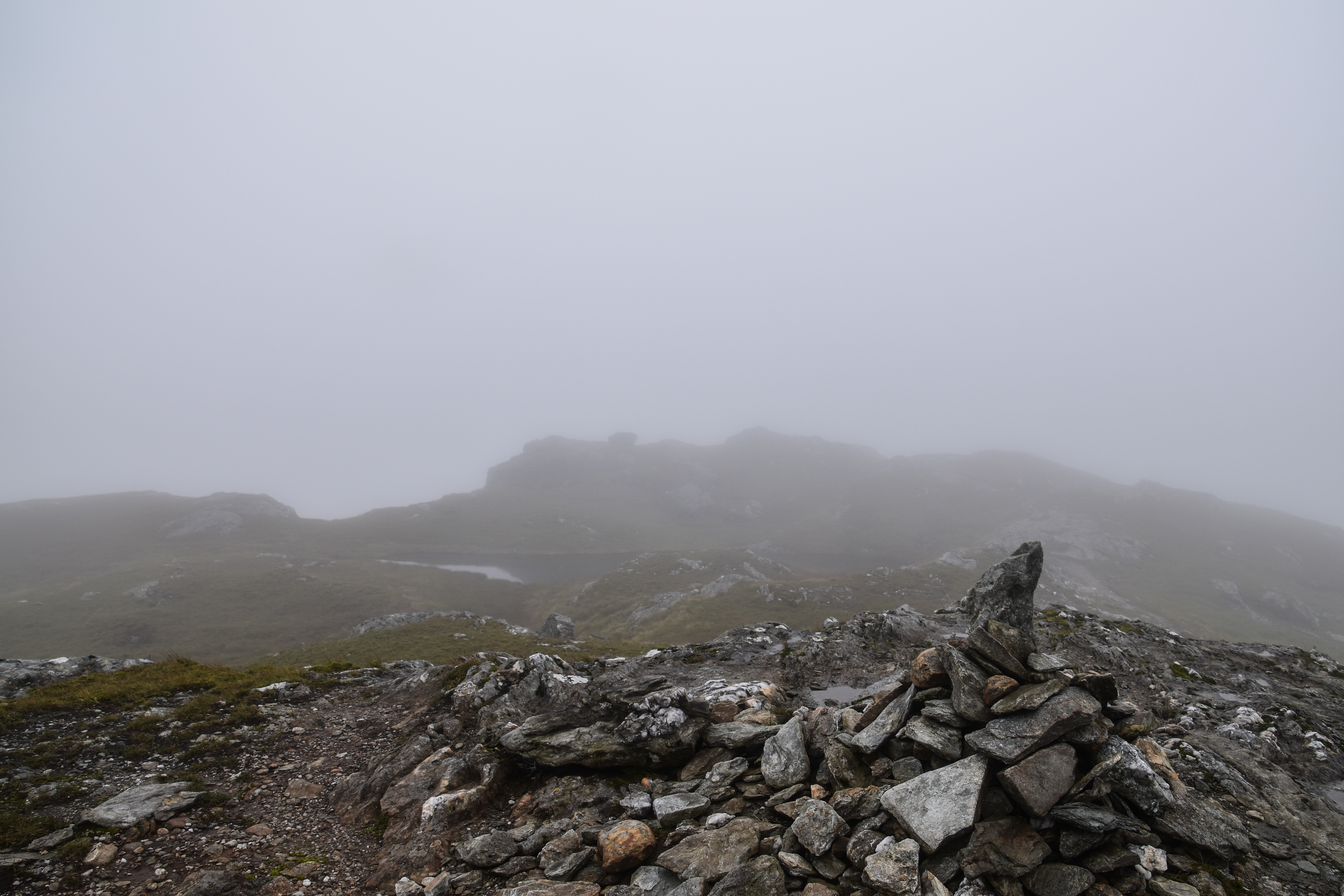 Again I decided not to spend any time in the clouds and as I was making better progress than expected I opted keep going until I reached the bottom of the dip between the two morning Munros and stop for lunch.

This little Lochan would be my lunch reward stop. 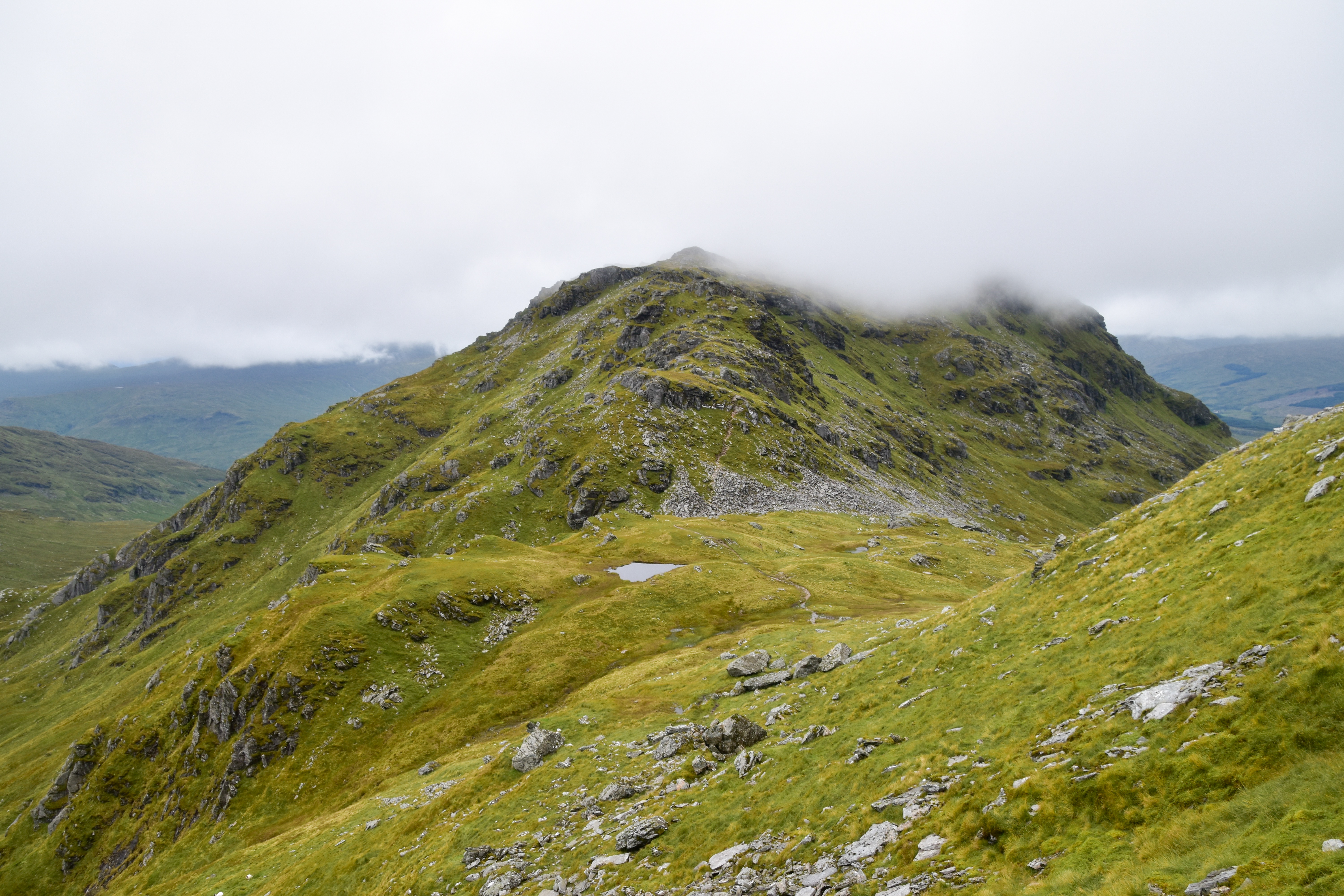 As I was sitting eating my lunch I got the perfect view of a little flyby - instead of trying to describe it, if you just scroll and blink really quickly the below it (might) look like the wee plane is flying across your screen.... 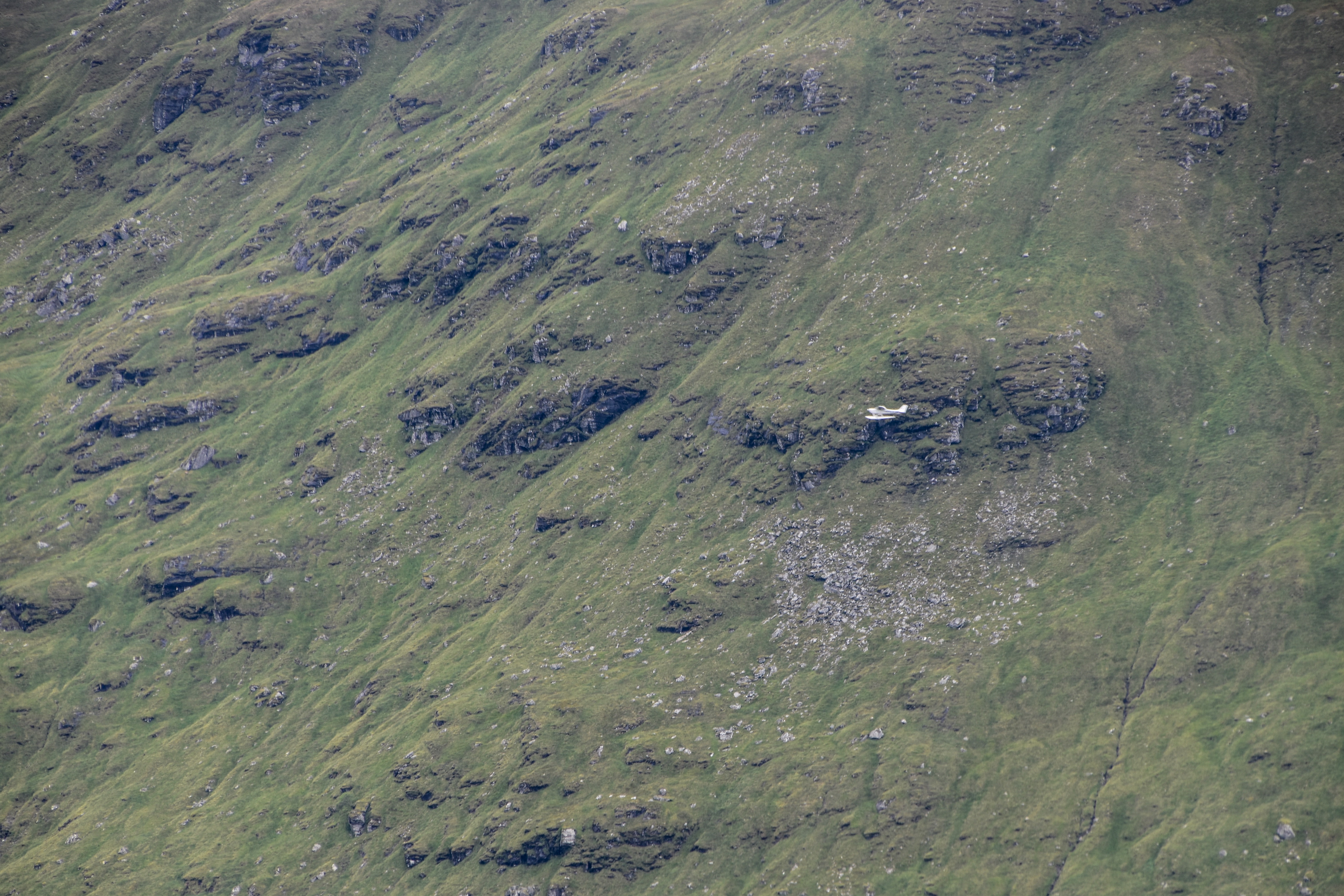 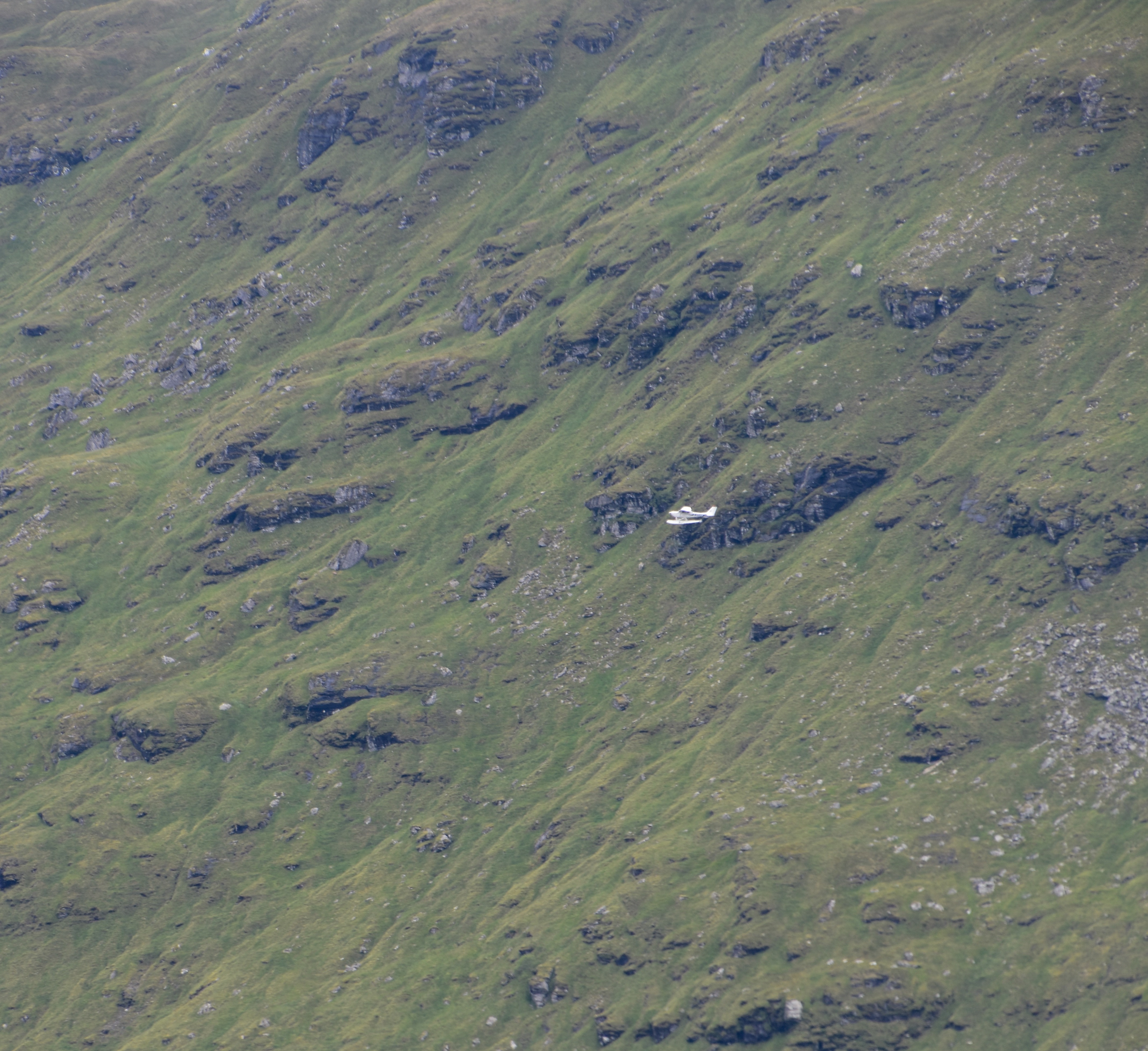 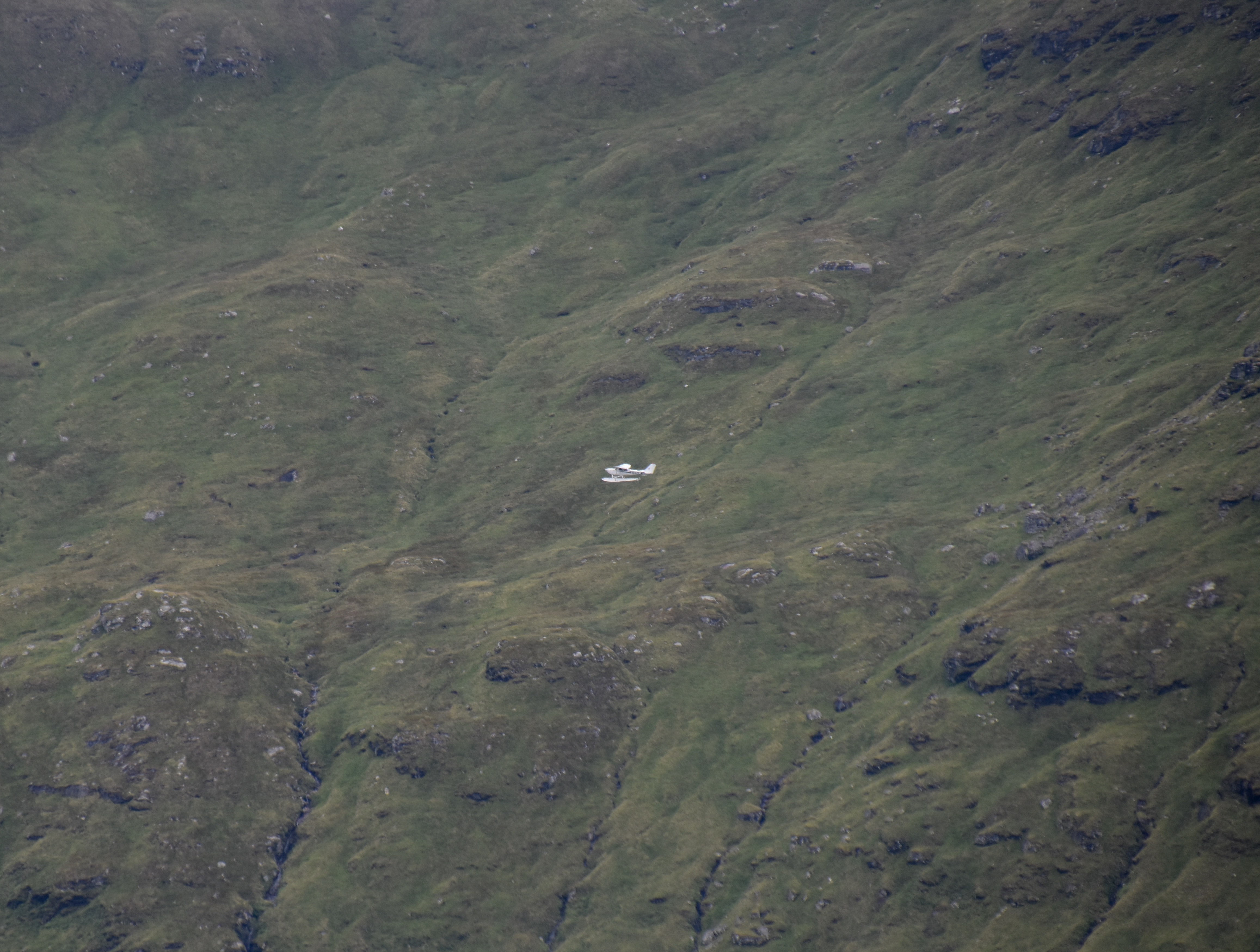 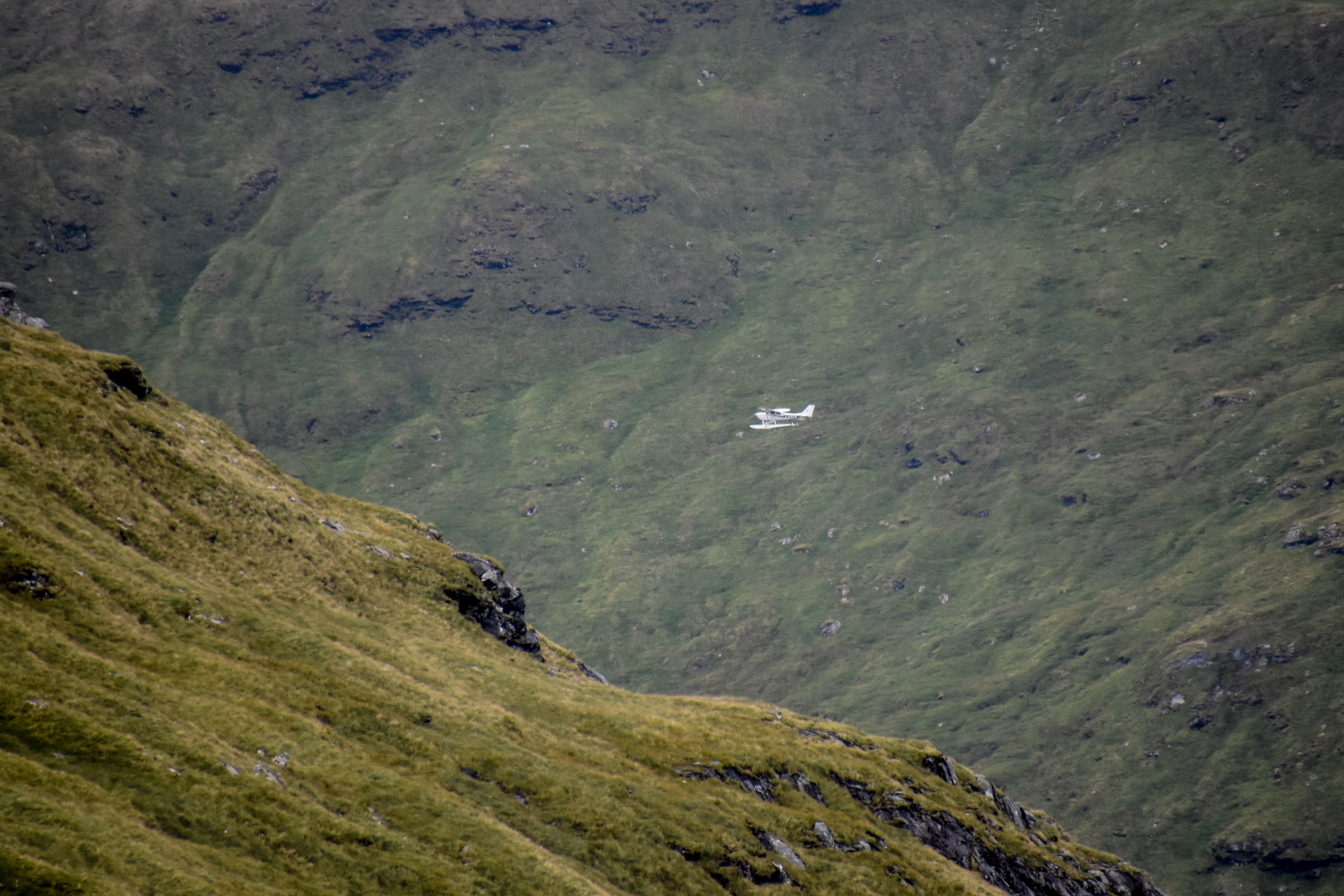 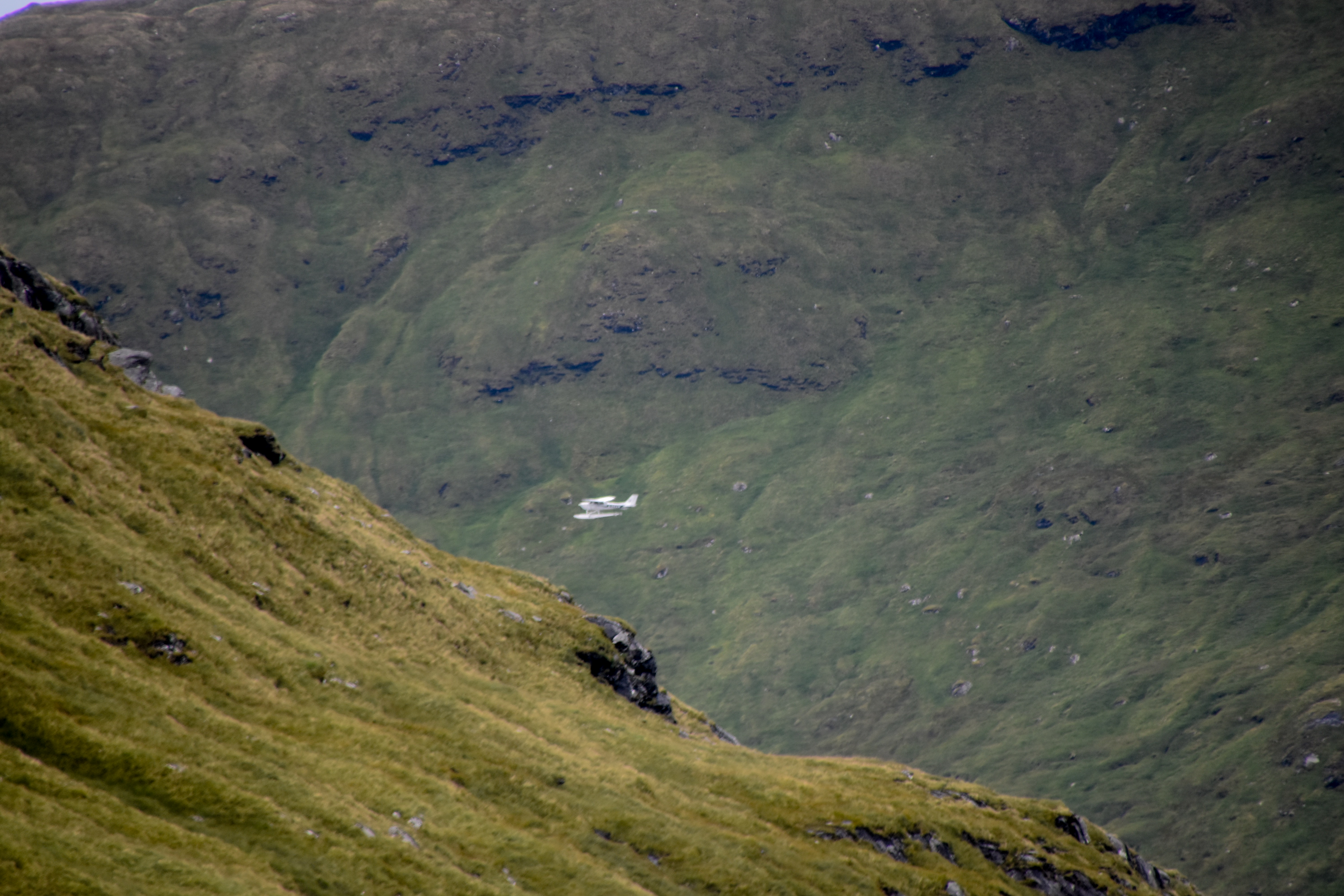 Now that I was full of peanut butter sandwiches (my loyal walking companion), Jelly Babies

and an apple I could set of on what I had expected to be the most difficult section of the day.

Although it doesn't look like you lose too much height between An Caisteal and Beinn a'Chroin before heading up Beinn Chabhair, I was definitely feeling pessimistic.

The next stop was up here somewhere. Nothing beats a, "lets take the direct route as long as the calves hold out!" 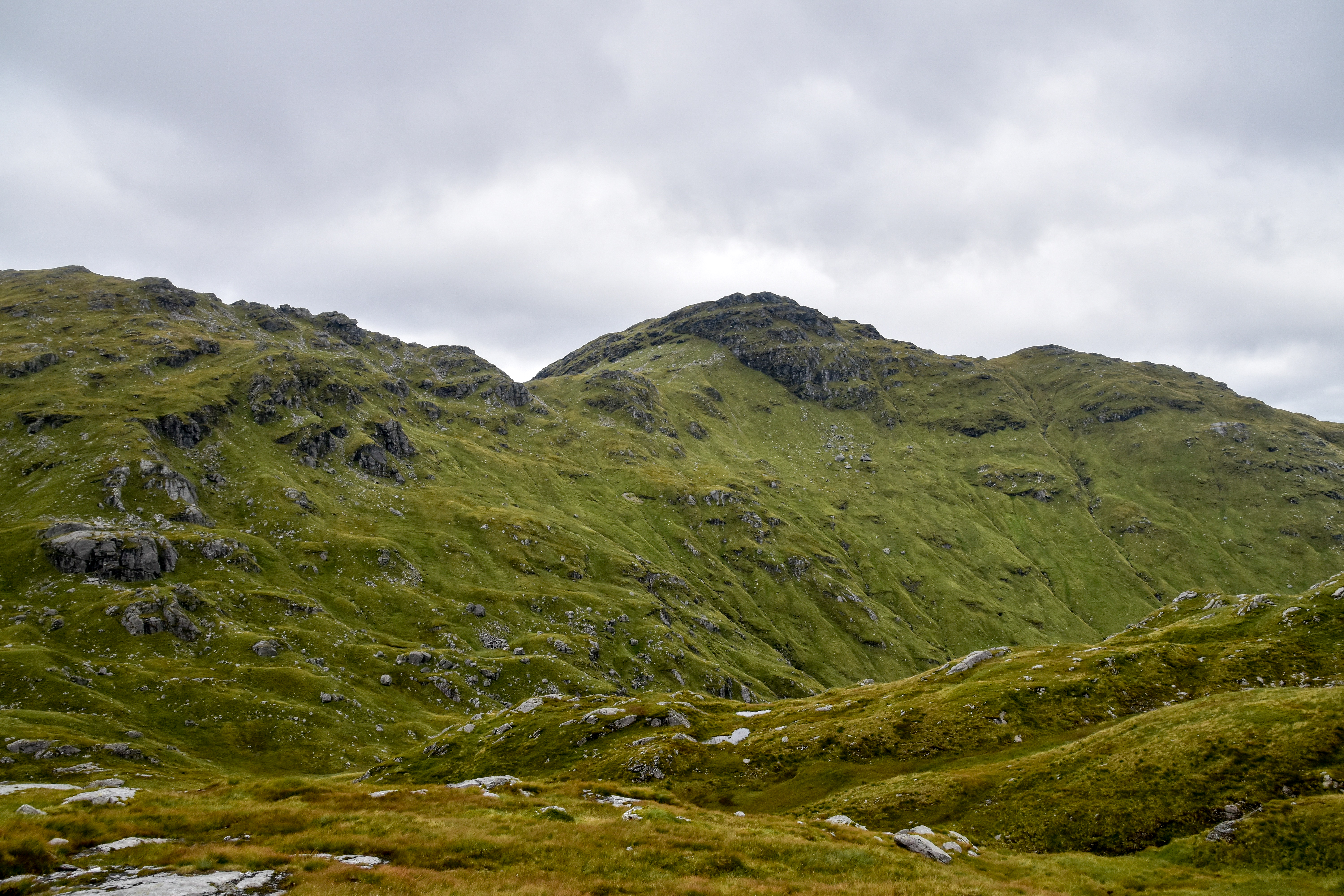 Unfortunately the views higher up were spoiled by the clouds but further down gives a glimpse into what this area has to offer! 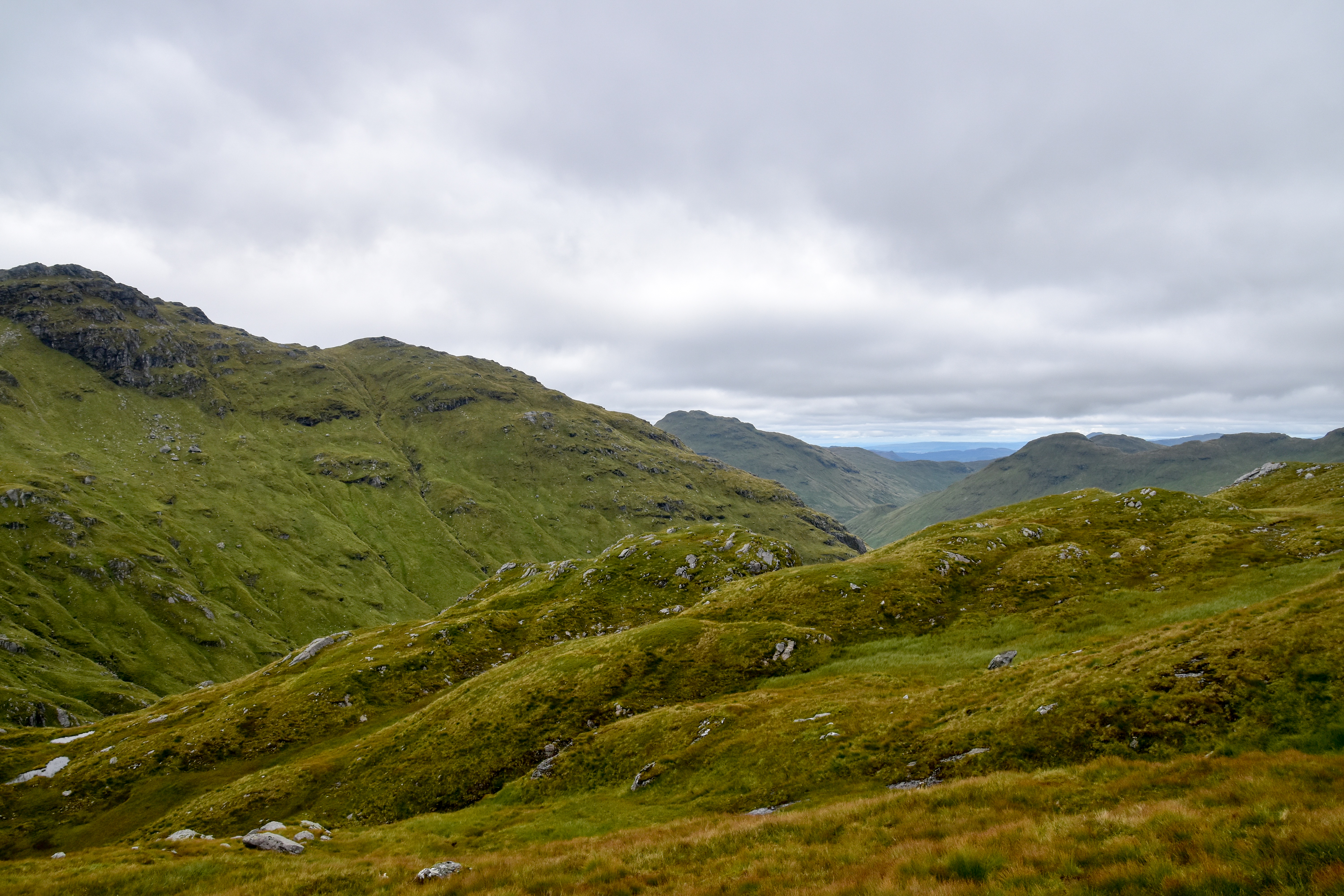 I know the title to this report may be slightly misleading so far - I haven't offered much advice. Just hang on in there.

The climb was far easier than expected - I even had time to take a selfie (this is far more difficult with a DSRL than you'd think! 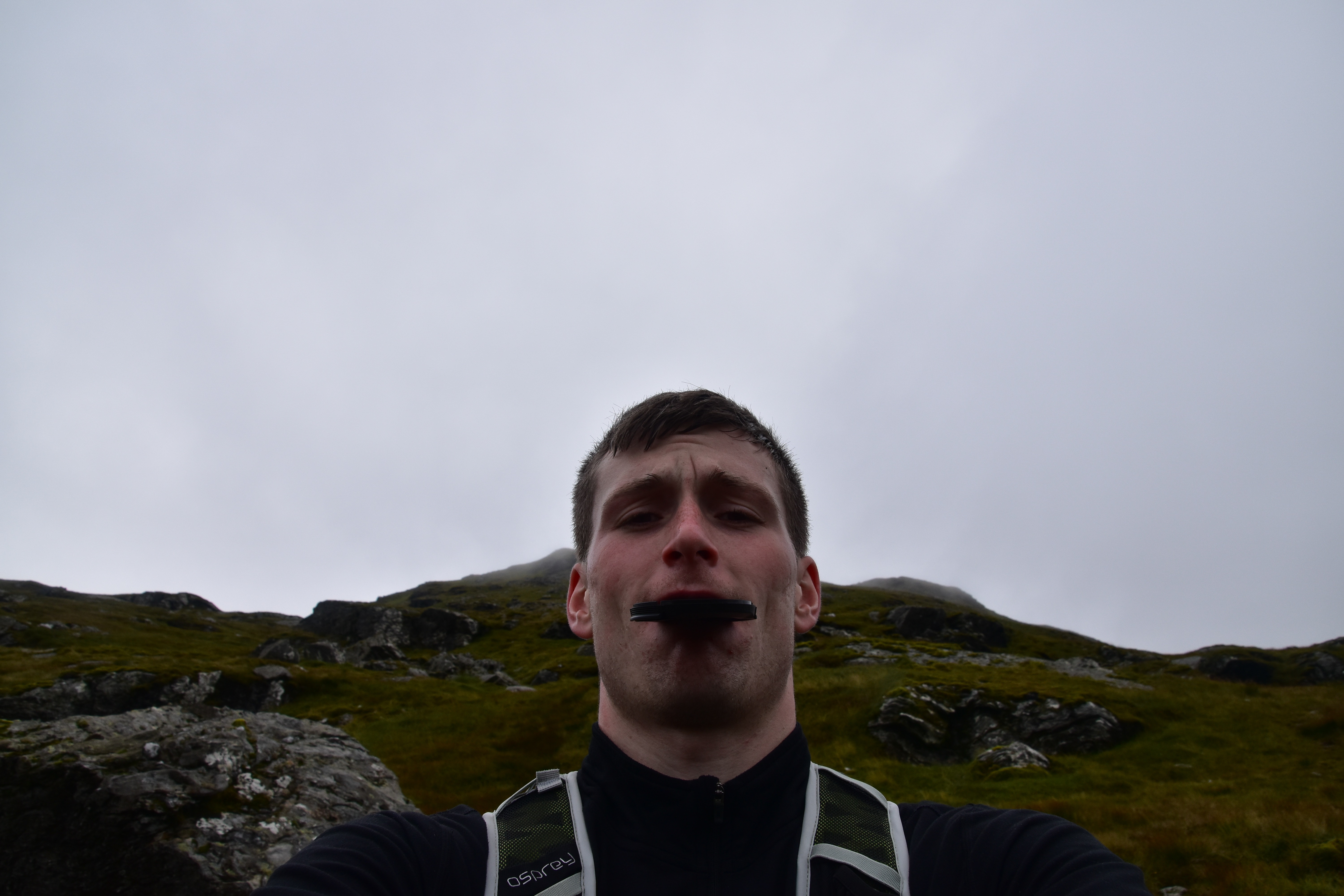 From my stop at lunch to reaching the summit only took me 35 minutes. Maybe I accidentally picked up one of the Russian Olympic athletes lunch instead of my own.... 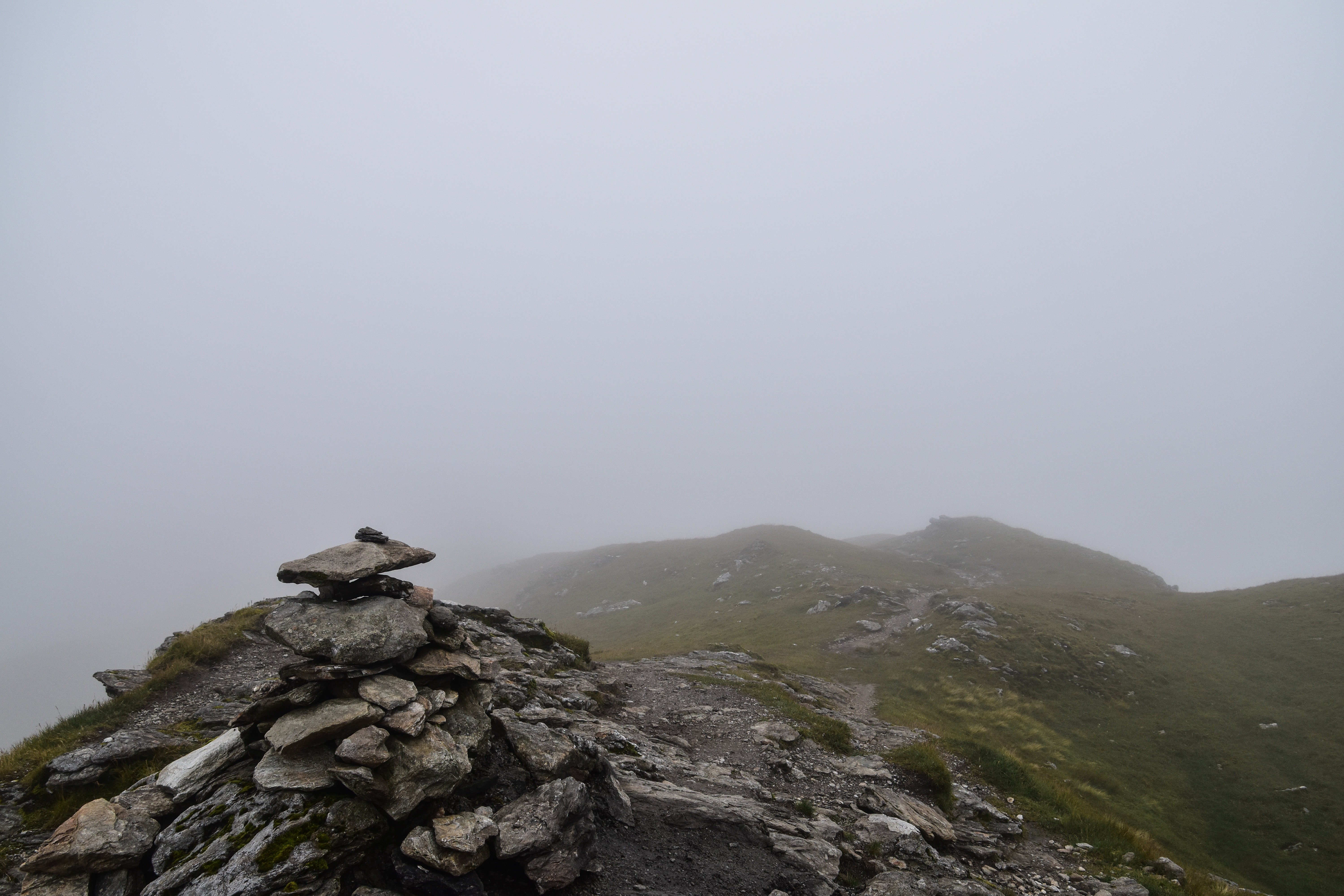 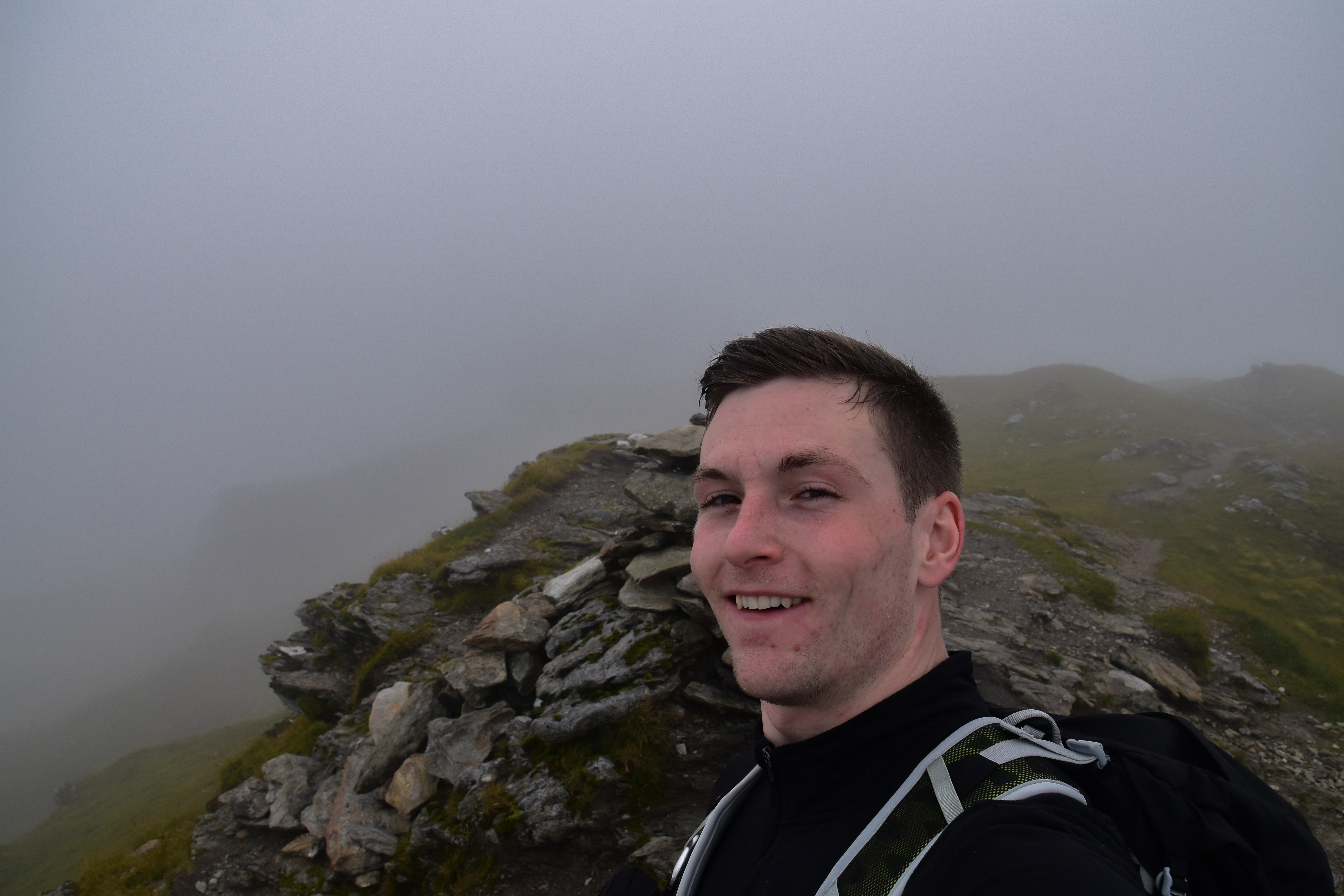 As I began the descent off from Beinn Chabhair I met a few rather wet legged looking soles making their way up. I stopped and spoke to a few who offered the following advice: -
1) You'd be as well staying up here the f-ing midges will eat you alive down there; and
2) Hope you've got the snorkel in your bag.

This seemed a tad exaggerated as I had only just past a young chap wearing shorts and trainers - I had gaiters and everything, surely this would be a stroll in the park.

Lomond and the Trossachs definitely wasn't the ugly kid at school! 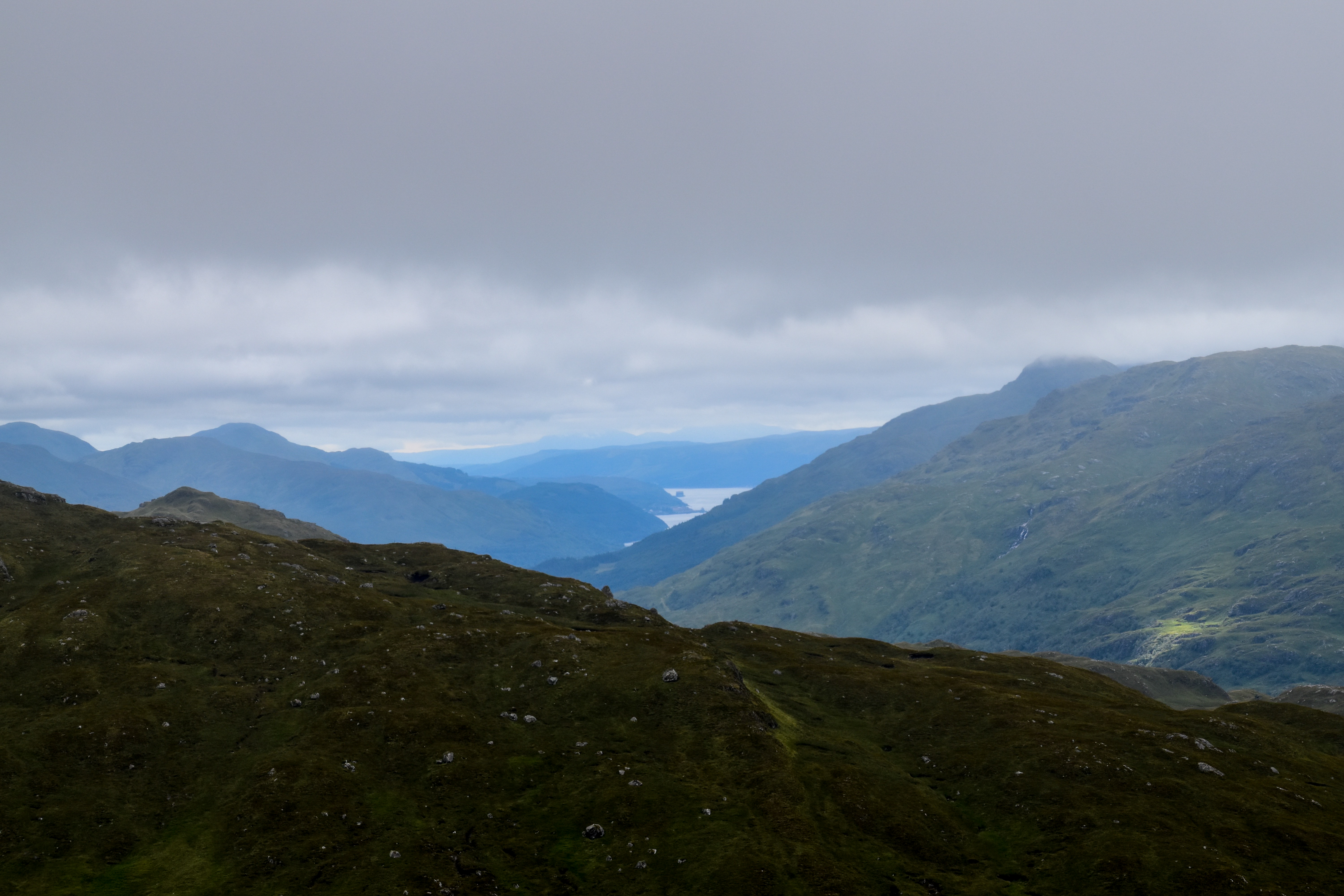 The further I made my way down towards Inverarnan the wetter the ground was getting...

I live in a swamp! I put up signs! I'm a terrifying ogre! What do I have to do to get a little privacy?! What are you doing in my swamp?!! 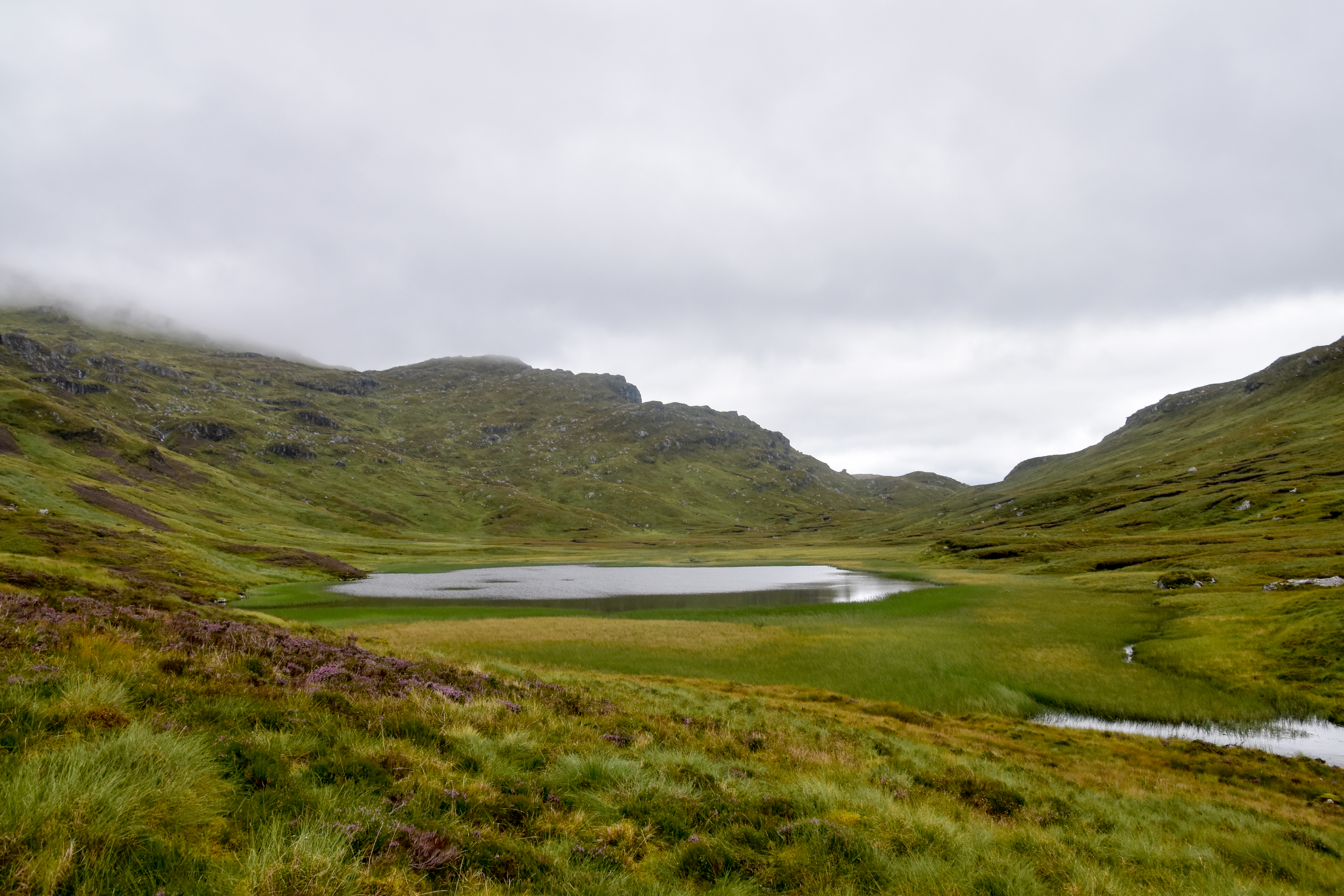 Thankfully Shrek and donkey weren't home so I continued on my way. Firstly, Walkhlighands has a few Bog Factor ratings: -
"1) Walk is usually completely dry underfoot;
2) The route may be slightly boggy in places;
3) Much of the walk may be dry, but there are sections which can be very wet. Waterproof boots recommended;
4) Underfoot conditions are likely to be very wet in parts all year round.
5) It's a swamp. Snorkel recommended."

Beinn Chabhair is rated a 3 (somehow). Maybe it is just because the summer of 2016 has been wet, very wet, but it felt like a 5.

Thankfully for me I found myself following a group of three. It kind of went like this.
Person 1 - Gamble for a solid patch of ground, inevitably end up shin / knee deep in bog (poor bloke).
Person 2 - Either accept the fate of person 1, or take further gamble.
Person 3 - Weigh up the previous two outcomes and take an informed decision (he was the driest so far).
Me - Keep walking slow to be sure not to need to overtake

This worked brilliant for a good part of the journey back to Inveraran, maybe the best part of 2km. Unfortunately they stopped for a bite to eat and we had a quick chat before they offered my advice of the best way down.

By now I was glad I did this made up circuit as it meant I only have to trace the steps to Beinn Chabhair once. It must be rather depressing reaching to summit knowing you have to endure the bog bashing all the way down again.

It is a steep descent and before long you see the camping grounds just next to the Drovers Inn. The day had gone swimmingly so far and I was yet to fall - yep you guessed it.

The problem with seeing how close you are to the end it's super easy to lose concentration and begin thinking about what to eat for dinner at the Drovers Inn....

Next thing I knew my right leg gave way and I was completely soaked. Unsure if anything was sore, but thankfully my camera appeared dry(ish).

Still lying in my "puddle" I found a witness to my fall. 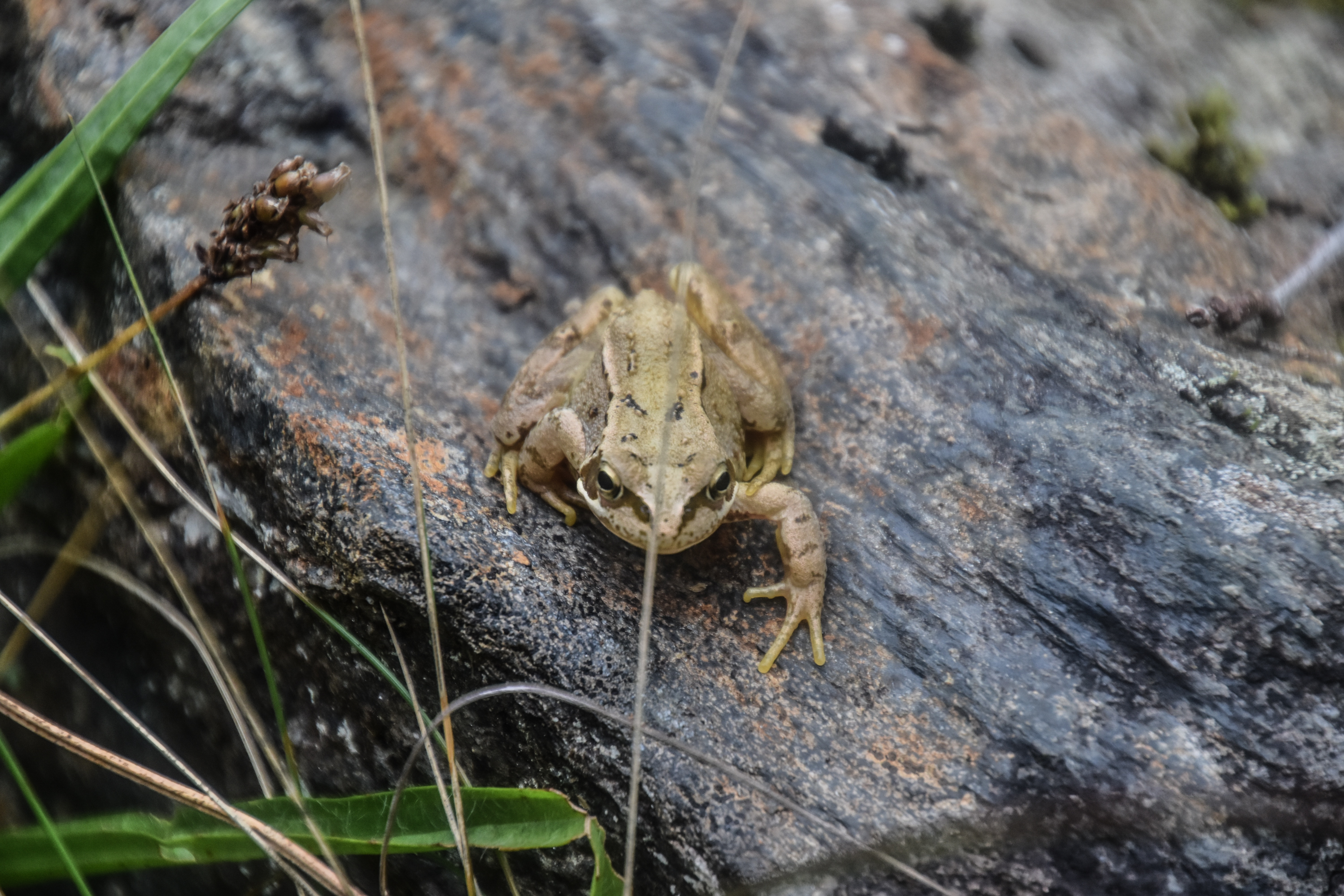 Anyway I wasn't all that bothered because I knew I had packed a towel, a change of clothes and some deodorant so I could easily pop in for dinner before driving home.

I made it back to the car and lo and behold somehow I had left my change of clothes already laid out for my next adventure... back in Aberdeen. Unsure what I had fallen in, but not smelling particularly fantastic I decided I would skip dinner in Inverarnan and drive back to Aberdeen rather muddy and half dressed.

I left Inverarnan at 16:00, after a whole 8 hours of near solid walking. In short my advice is, if like me, you are trying to bag all these Munro's and don't have time for the Crianlarich 7, take this route. Although long, it is far easier that I expected and the best part is you only have to pass through Shrek's swamp once. (I have mapped a rough version of my route at the bottom). 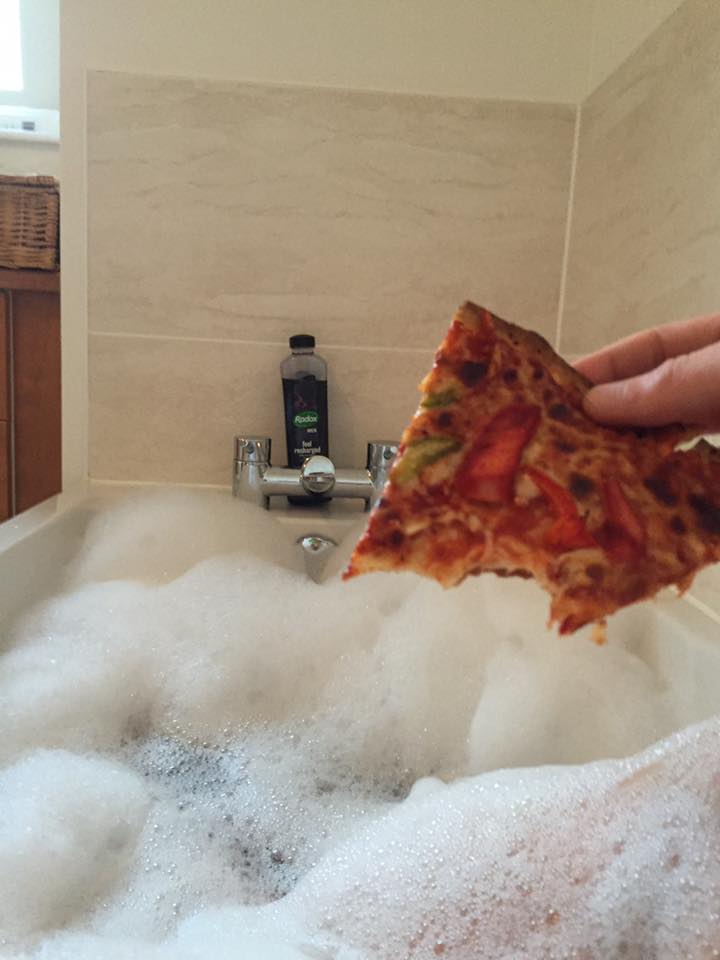 After reaching 42 Munros in 53 weeks I now know I only have 240 left... Within those 53 weeks I took 18 off to train for the Vancouver Marathon and avoid any in the snow.

I have a navigation course this weekend and I am looking to do a winter skills course towards the start of next year. I have done a fair bit of research but does anyone have any recommendations? After Loch Ness Marathon in September I really want to make some quicker progress for the remaining 240!

I know it's far away but is there a traditional 'final' Munro??- I've been thinking Ben Hope. Mull - although difficult for others to join...

Can you tell I stay in Aberdeen and my parents in Stirling... 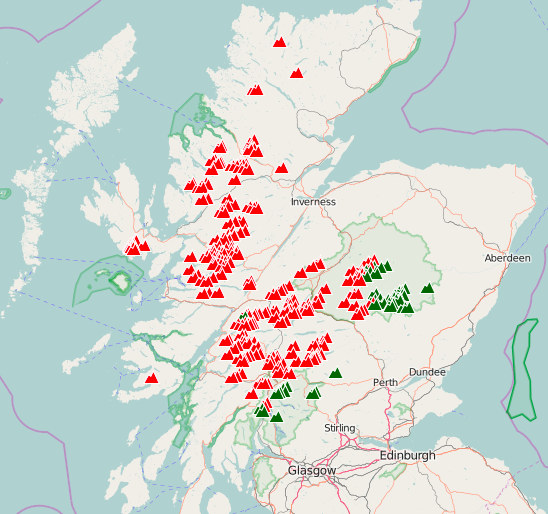 as always any advice is appreciated.

Also if there is anyone based in the Aberdeen area on a similar mission - feel free to fire me a message!

Re: The Final Crianlarich 3 - My Boggy (yet brilliant) Advic

I had always thought attaching Beinn Chabhair to An Caisteal and Beinn a' Chroin looked a right slog and couldn't understand why it's quite a common grouping but your report makes it sound really interesting and justifies it pretty well!

The walk out of Beinn a' Chroin down the side of the River Falloch is also very wet so I wonder how it compares to Beinn Chabhair. I wouldn't know as I did Beinn Chabhair in winter gliding over hard packed snow beside Beinn Glas Burn

As for suggestions, I did my first munro in July 2014 and decided straight away I was leaving Ben Lomond for my final munro as it's the closest to home and easiest for others to join in. I thought I was being smart but I soon found most people choose a final hill for similar reasons. I personally know a few people that have done Slioch last and there is also this wee article- https://wildaboutscotland.com/2013/04/22/most-popular-last-munros/

Maybe one thing I would say about your munro map which I see you are well aware of is start spreading out your walks. Ullapool, Kintail and Fort William area are all really good for racking up numbers over a weekend.